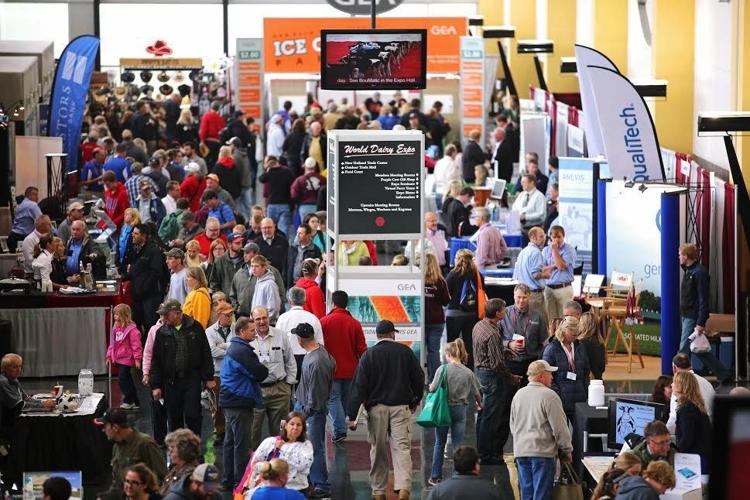 Hard work has kept the World Dairy Expo as the go-to destination each year for people working in the dairy industry around the world despite low milk prices and other factors that have contributed to serious financial problems for farmers and others. 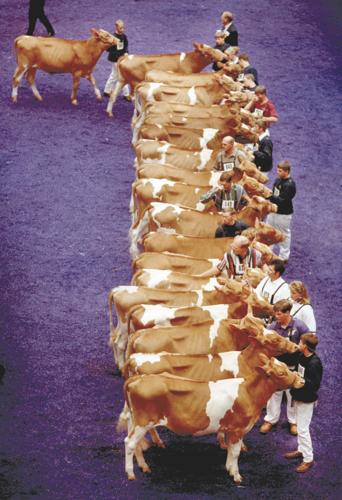 Cattle shows that include judging the world's best Guernsey cows remain strong at the World Dairy Expo even though financial problems are plaguing the dairy industry.

Farm closings, record-low milk prices and trade wars are some of the themes one expects to hear about in any discussion of the dairy industry.

But at the World Dairy Expo this week, expect the talk to include calculated risks, change and yes, even optimism.

The five-day global dairy showcase, set to begin Tuesday, draws the largest crowds of the year to Alliant Energy Center. It will include informational seminars on key issues for dairy farmers, competitions outside the cattle and trade shows and social and business opportunities.

“Folks have their own reasons that motivate them to come here, and we try to capture that spirit as successfully as we can,” said Scott Bentley, World Dairy Expo general manager.

Last year, attendance at the expo dropped by about 6,000 -- pushing total visitor numbers under 70,000 for the first time in six years.

But a record 884 companies took part in the trade show last year, an increase of three from the 2016 show, data showed. Nearly 300 new companies have been brought in to show their products over the past three years.

"We want people to say to themselves when they get here that, 'I need to meet with every new or existing commercial exhibitor because the message I heard last year was different than the year before,” Bentley said.

Bentley says the Dairy Expo is expecting similar attendance at this year's cattle and trade shows based on registrations. That doesn't surprise Mike Hellenbrand, an exhibitor who co-owns a cattle breeding service in Cross Plains called City Slickers LLC.

"Show people are a gregarious group," Hellenbrand said. "They take pride in their animals and how they take care of them and show them, and that keeps a lot of us going in tough times. It's a great thing to see how people really band together and support one another in the showing world."

Generally, people in the dairy industry have been struggling because the debt burden has become overwhelming as they wait for milk prices to creep up from three straight years of record low levels, said Dan Basse, an economist and founder of Chicago-based AgResource Company that forecasts domestic and world agricultural price trends.

In Wisconsin, 429 dairy farms have closed between Jan. 1 and Aug. 31, according to data from the National Agricultural Statistics Service. The pace doesn't need to increase much over the final four months of the year for 2018 to end up topping 2011's 647 closures, which is the record during the 14-plus years the service has been collecting data for that category.

Unlike past years, when just the smallest farms, with herds of 50 or fewer cows, were closing, some big farms with herds of more than 300 cows are also succumbing to the pressures of building debt with little equity, Basse said. "It all depends upon how many years you can endure negative margins," he said.

Basse's short- and long-term outlooks aren't optimistic, partly because he believes China has the upper hand in its trade war with the U.S., and that will continue to limit demand. "We need to get that Chinese market open for U.S. dairy products if we're going to see an end to this whole thing. The way the administration is negotiating, we have no idea when that'll happen," he said.

Basse thinks another key to turning around the industry's problems is to move past the stale, unimaginative marketing approaches it has used for years, even when it had no competition.

"What's sexy about going to the store to pick up a plastic jug of white (milk)?" Basse asked rhetorically.

Basse, who grew up on a dairy farm in Waukesha and got his degree in agricultural economics at UW-Madison, said marketers within the dairy industry must better promote the benefits of their products at the grocery stores to regain consumers' interest. Other than some higher-end milk brands -- such as Coca-Cola's fairlife -- few dairy processors feel that’s important, Basse said.

"The whole marketing campaign of the dairy industry needs to dramatically change and, so far, those that sell (its products) don’t seem willing to do that," he said.

It wouldn't surprise DATCP Secretary Sheila Harsdorf if some key answers to the global dairy industry's problems -- whether it's low prices and marketing issues in the U.S. or drought conditions in Europe or Australia -- come from somewhere in Wisconsin in the near future. She said they could come during the Expo or from discussions within the Wisconsin Dairy Task Force, which was created by DATCP and the UW System earlier this year. Its goal is to make recommendations on how to make the state dairy industry more viable and profitable.

"We know that there are some things that the state may not be able to do (with) more federally related issues ... but I believe (the task force) can have a voice speaking to federal issues, as well," Harsdorf said.

Harsdorf's family owns a dairy farm, and she ran the growing operation near River Falls before becoming a state legislator in 2000. She was also a roommate for four years at the University of Minnesota to Jeannette Sheehan, who is being honored this year as the Dairy Expo's Woman of the Year. Sheehan, of Rochester, Minn., showed the 2016 Grand Champion of the International Holstein Show and Reserve Supreme Champion of the Dairy Expo that year.

Harsdorf admires how the Dairy Expo creates optimism within, and opportunities for, the dairy industry in the state and the rest of the world.

"It's important that people recognize how fortunate Wisconsin is to be able to host that show," she said. "There are states who would give anything to be able to attract this show to their state. But it's most fitting that it's here, given the fact that we are a leading dairy state and home to a great dairy industry that we want to maintain."

Bentley hopes the Dairy Expo will provide fresh ideas and a positive boost to dairy farms in a tough time.

"While change might be slow, I sure hope that all of our dairy producers, not just in Wisconsin but outside of these borders, as well, are really open minded, because we're all going to have to be if we're going to be in business in 10 or 20 years time," he said.

When: Tuesday through Saturday.

In the Sept. 30 story about the World Dairy Expo, economist Dan Basse said the dairy industry needed to better promote the benefits of its pro…

The master plan for the Alliant Energy Center would transform the campus with hundreds of millions of dollars in new, private development — in…

Hard work has kept the World Dairy Expo as the go-to destination each year for people working in the dairy industry around the world despite low milk prices and other factors that have contributed to serious financial problems for farmers and others.

Cattle shows that include judging the world's best Guernsey cows remain strong at the World Dairy Expo even though financial problems are plaguing the dairy industry. 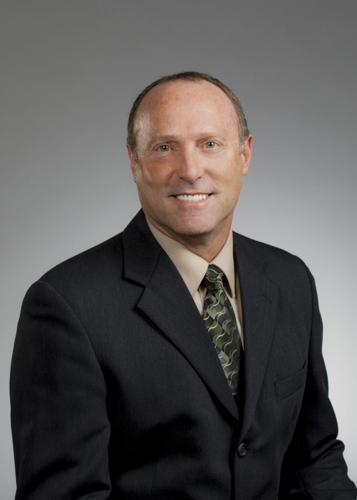