After almost 12 years in what he describes as his “dream job,” Wisconsin State Journal editor John Smalley announced Thursday that he is leaving the newspaper.

Smalley’s last day with the newspaper will be Aug. 21, ending 39 years of service with Lee Enterprises, which owns half of the paper’s publisher, Capital Newspapers.

A native of Evansville, Smalley grew up reading the State Journal and said “it was a privilege to work for my hometown paper.” He took over news operations on Dec. 15, 2008, an anniversary he celebrated each year by wearing a tuxedo to the office.

“I wanted to show people how much I loved working here,” he said. “It became a tradition.”

State Journal publisher Chris White said Smalley’s legacy will be “the team of incredibly talented journalists that he recruited and led for so many years while guiding our organization through the fast-paced transformation to a digital-focused news source.”

“We’re all better off because of John’s work,” White said.

Lee regional editor Marc Chase said the company has not set a timeline for naming a new editor.

Smalley took over the State Journal amid the nation’s largest recession in decades and at a time when newspapers were beginning to navigate the shift to online readership. His departure comes amid even greater crises — the COVID-19 pandemic and civil unrest over systemic racism and police brutality, which he said highlights the value of local news coverage.

“Our communities need journalists now more than ever,” Smalley said.

“There’s a huge abiding respect for the work John has done, especially recently when journalism has been taking such a huge hit,” Shah said.

Smalley, 62, got his start in journalism as a part-time sports reporter for the La Crosse Tribune in 1977 while studying at UW-La Crosse. His first full-time job was assistant sports editor at the Mason City Globe Gazette in Iowa, where he was “the No. 2 man on a two-man staff.”

He later served as editor of the Globe Gazette, and his career included two more stints at the Tribune, where he was editor for eight years before joining the State Journal.

“It’s a good, long run,” Smalley said. “Maybe it’s time to give somebody else a try.”

Smalley said he is most proud of the State Journal’s round-the-clock coverage in 2011 of the collective bargaining law known as Act 10 and ensuing protests, which boosted the paper’s digital presence and earned the staff a Pulitzer Prize finalist designation, as well as a year-long look at homelessness in 2016 and a 2018 series on Madison’s lakes. 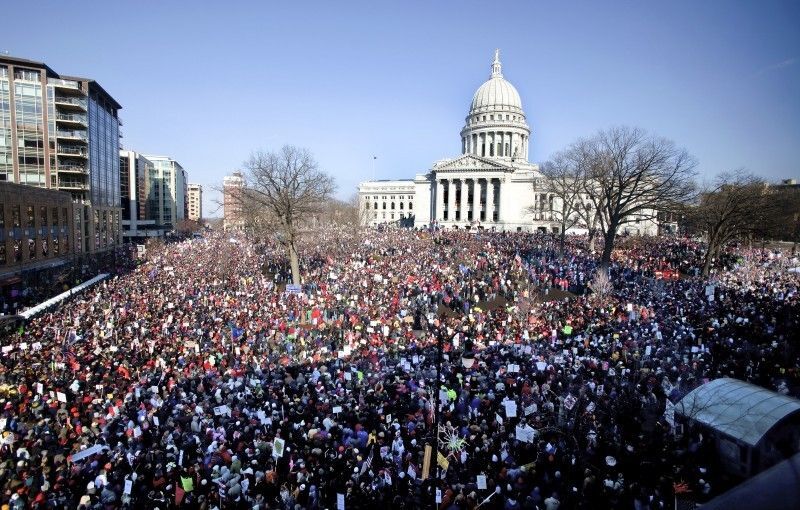 Nearly a month's worth of protests peak on March 12, 2011, in Madison with as many as 100,000 people turning out to protest Gov. Scott Walker's collective bargaining law. 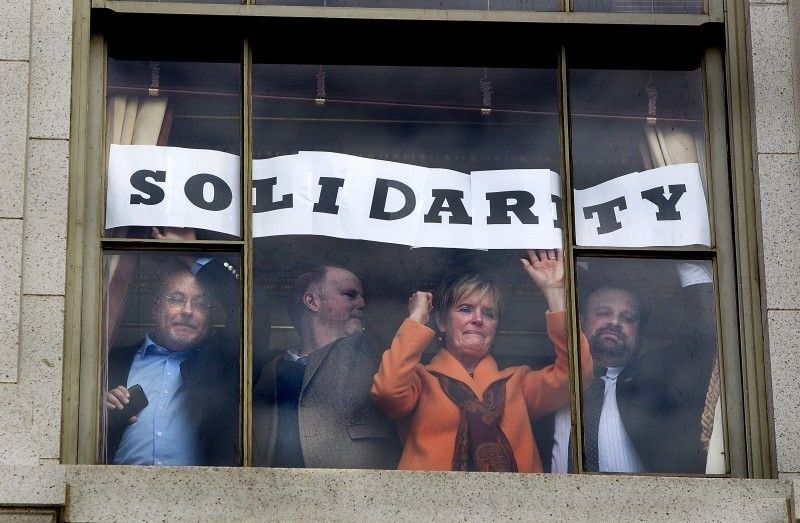 Democratic Reps. Mark Pocan, Fred Clark, Donna Seidel and Cory Mason hold a sign out a Capitol window Feb. 15, 2011, to show their support of the protesters outside. 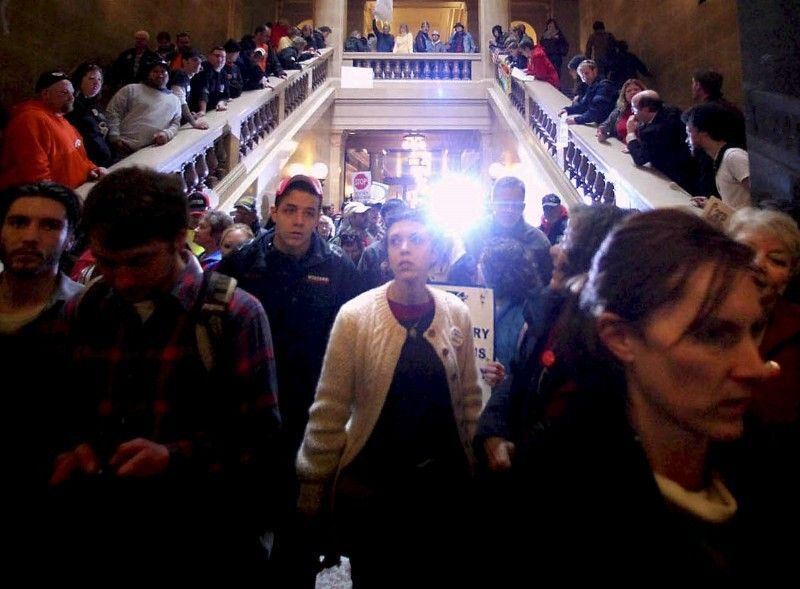 Thousands of protesters enter the Capitol on Feb. 16, 2011, after a rally against Gov. Scott Walker's collective bargaining proposal. 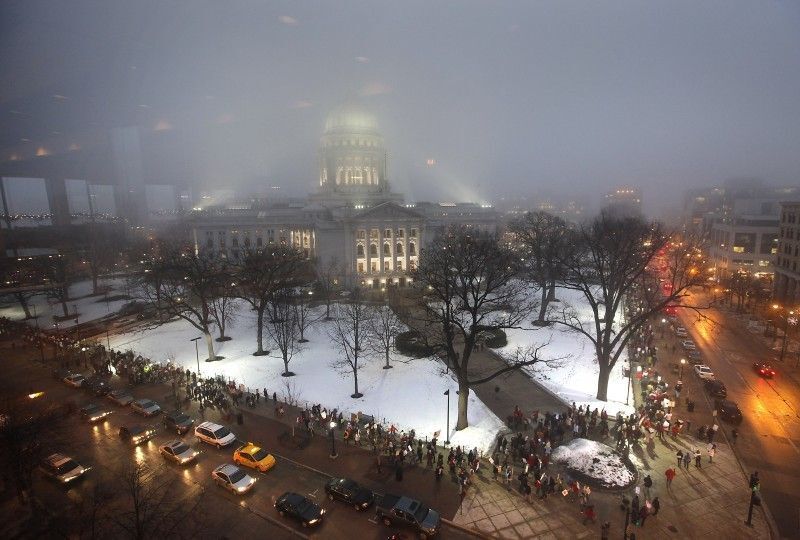 Opponents of Gov. Scott Walker's budget-repair bill march around the Capitol in Madison on Feb. 16, 2011. 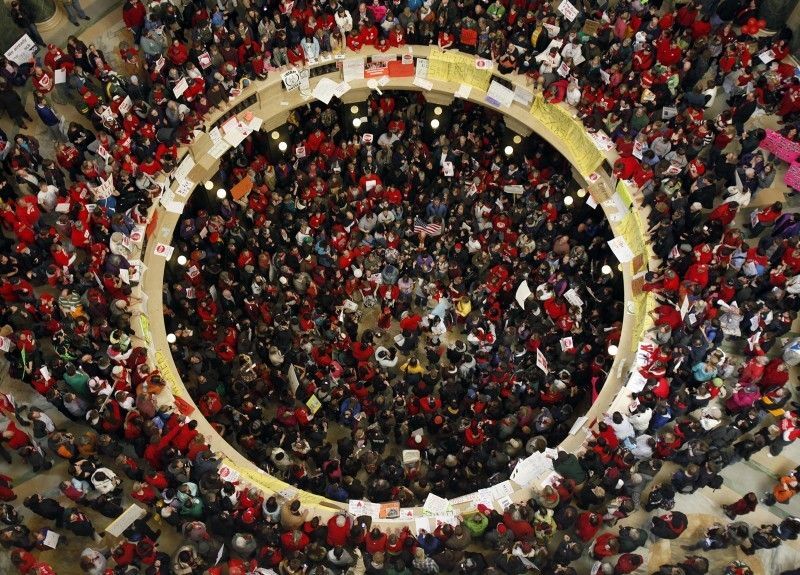 As seen from the Capitol rotunda dome, protesters drum and cheer on Feb. 18, 2011. 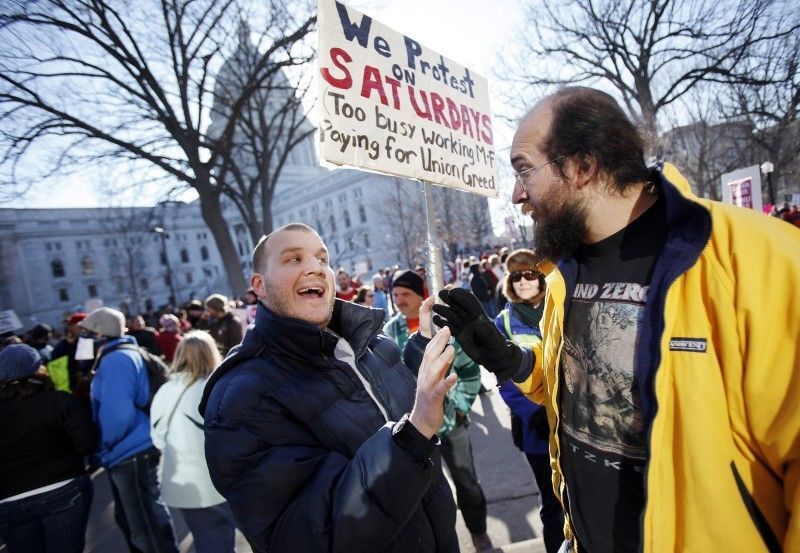 Tom Braun and Nathaniel Raghez, both of Milwaukee, spiritedly debate opposing sides at a rally outside the Capitol on Feb. 19, 2011. Observers nearby voiced approval of their civil discussion. 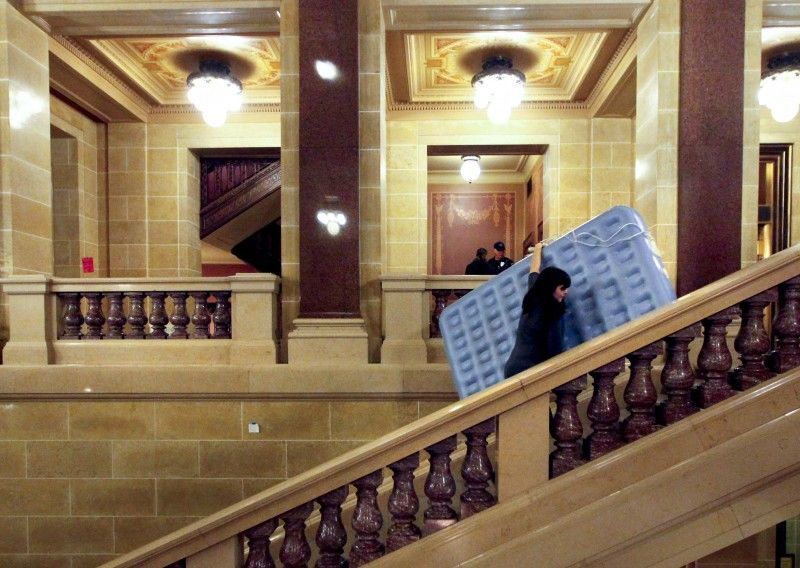 A protester carries an air mattress up a flight of stairs in the Capitol on Feb. 21, 2011. The historic building became a protest village. 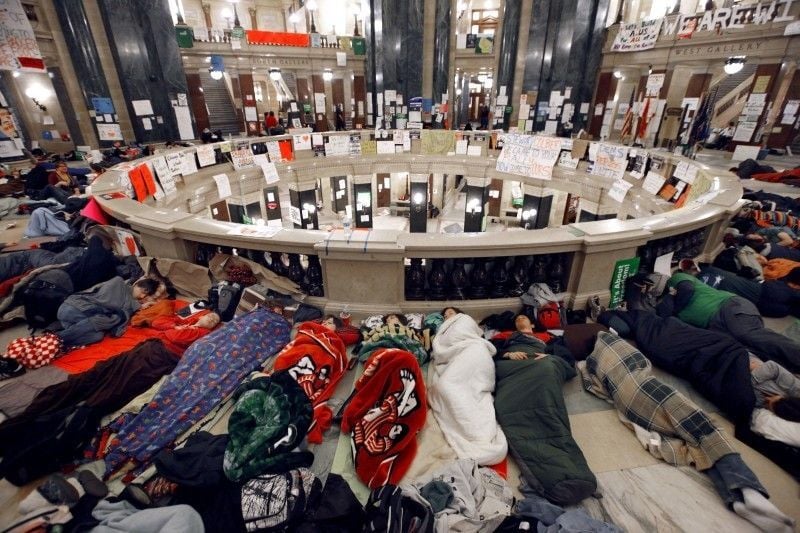 Opponents of Gov. Scott Walker's collective bargaining bill started sleeping at the Capitol to ensure a spot at public hearings, but the campouts became a mainstay. Pictured here on Feb. 21, 2011. 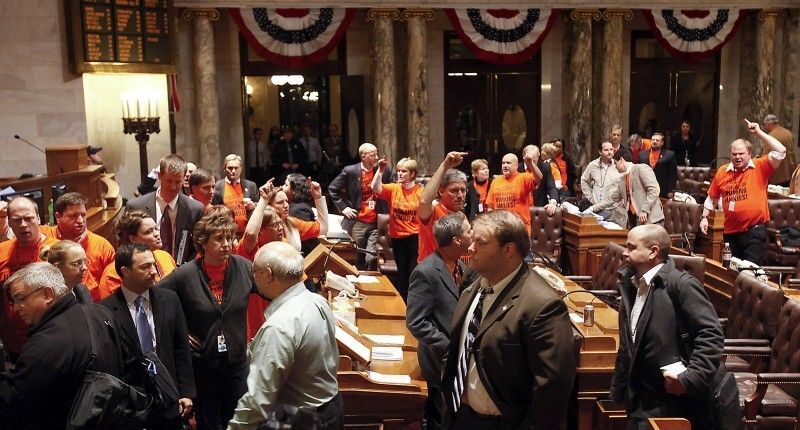 Assembly Democrats, in orange shirts, shout "Shame!" after GOP leaders cut off debate, move to abruptly pass the bill and walk out on Feb. 25, 2011. 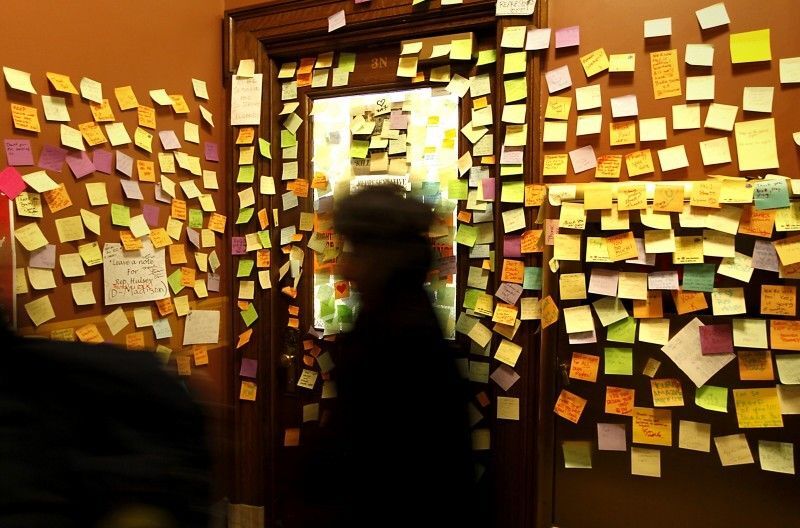 The legislative office entryway of Rep. Brett Hulsey, D-Madison, is covered in notes of support from opponents of Gov. Scott Walker's budget repair bill on Feb. 26, 2011. 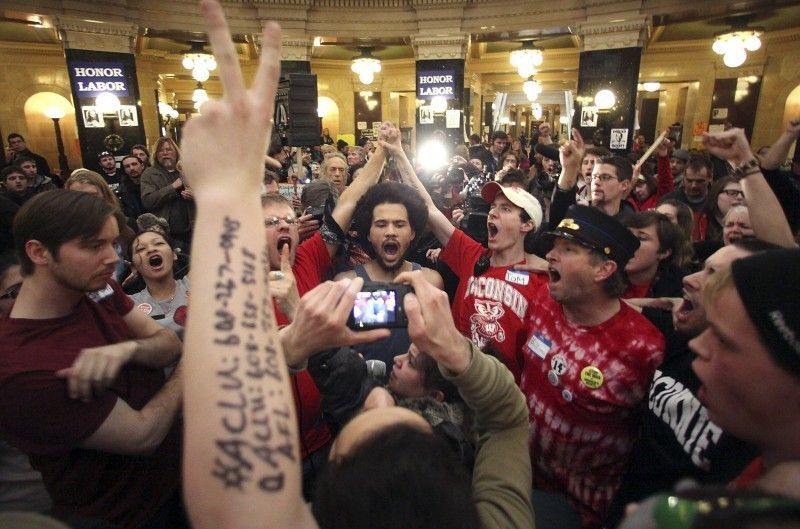 Protesters raise a cheer as a 4 p.m. deadline approaches to leave the Capitol. People debated whether to leave or stay and risk arrest Feb. 27, 2011. 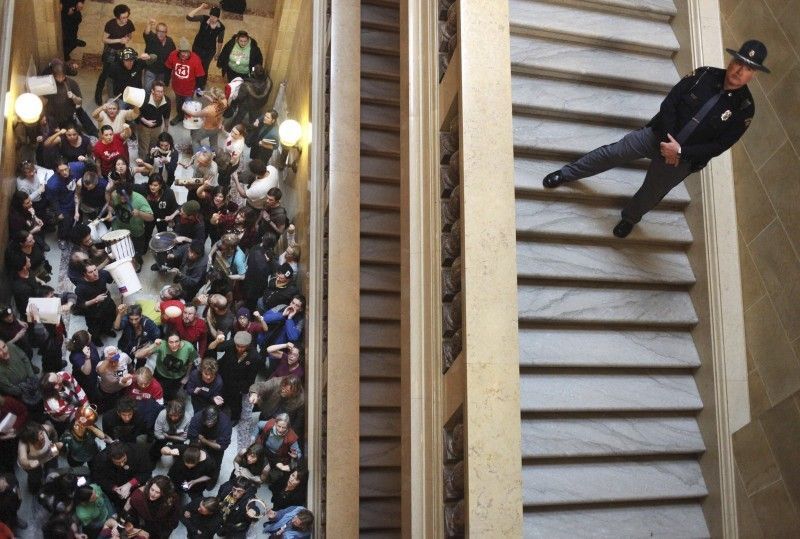 Protesters at the state Capitol were restricted to the ground floor of the Capitol on Feb. 22, 2011, while Gov. Scott Walker delivers his state budget address on the second floor in the Assembly chambers. 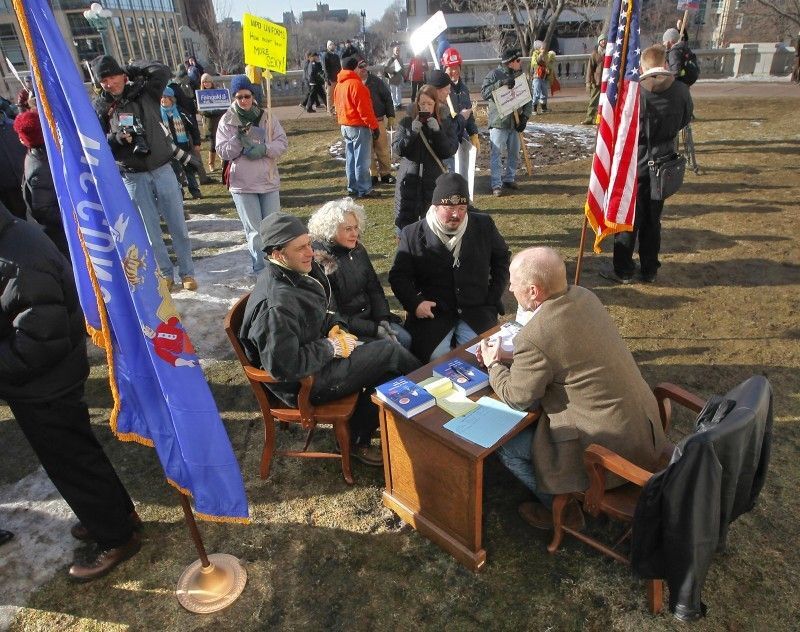 Rep. Fred Clark, D-Baraboo, meets with Lars Bergan of Viroqua, Connie Hundt of Madison and Jacob Hundt of Viroqua outside the Capitol on March 2, 2011. Several Democratic legislators moved their offices outside the building as constituents had trouble getting inside. 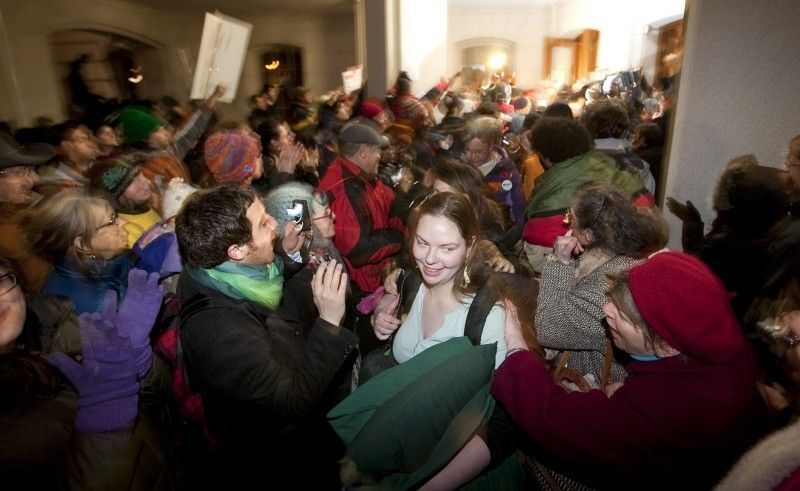 The final protesters leave the Capitol on March 3, 2011, after a court ruling that said people must leave the building during overnight hours. 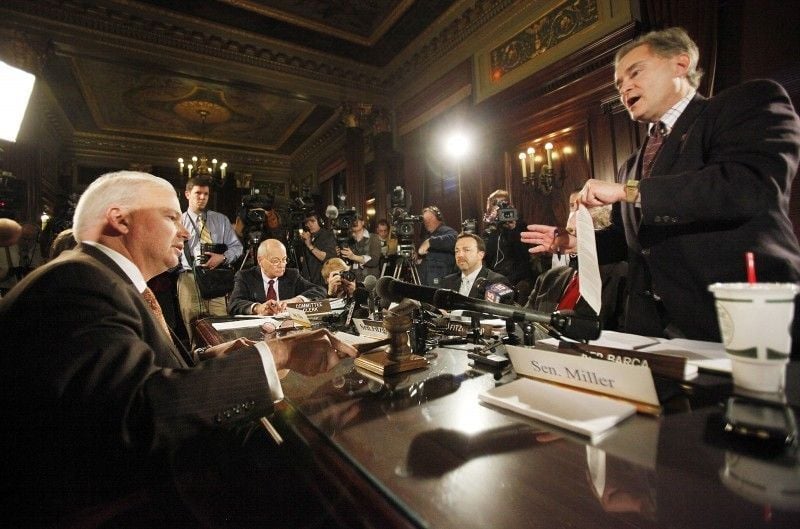 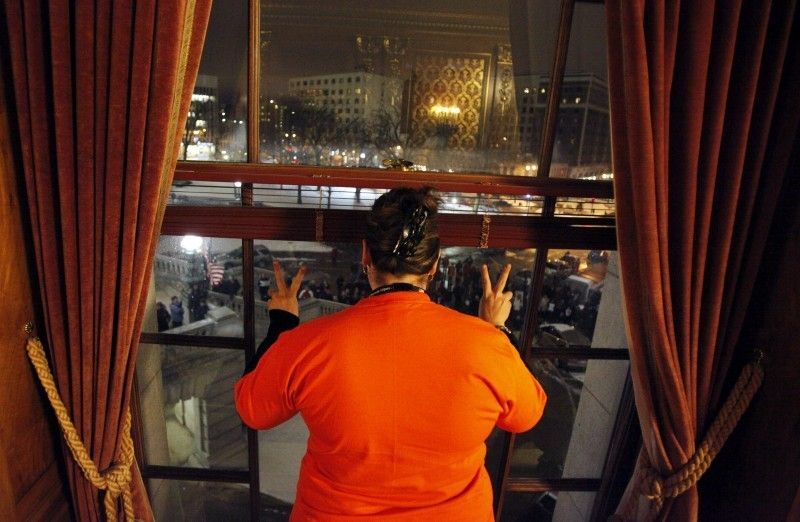 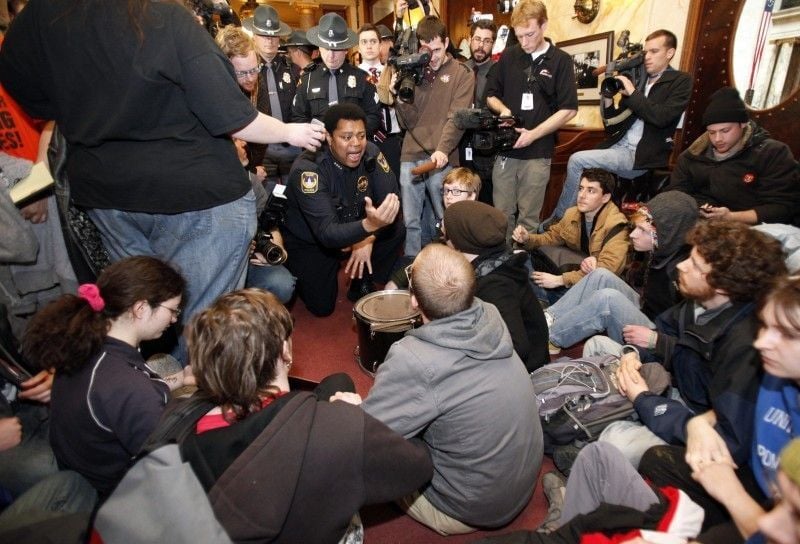 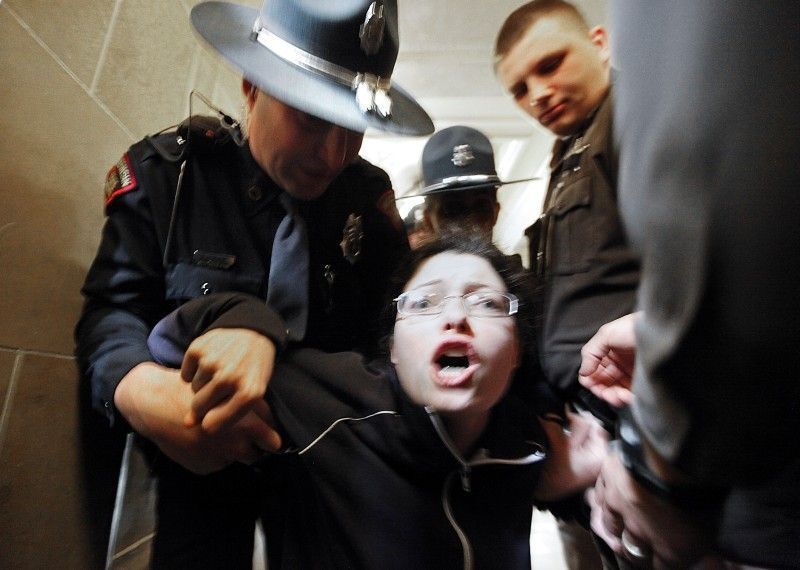 Officers pull Elizabeth Wrigley-Field out of the Assembly's lobby March 10, 2011, after protesters spent the night. Tensions flared overnight after senators passed an amended version of the bill that stripped nearly all of collective bargaining rights from most public workers. 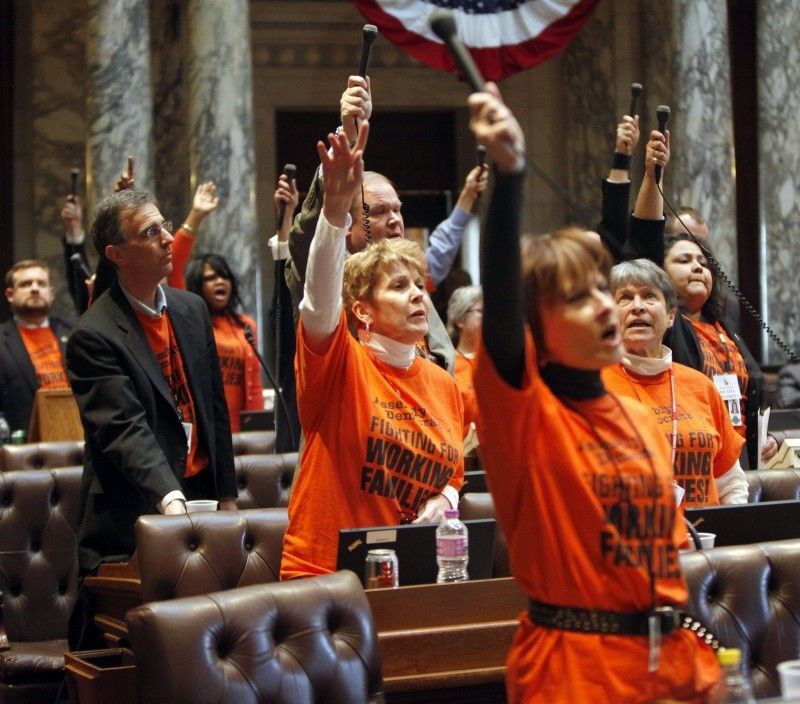 Assembly Democrats seek to be recognized as Republicans move forward on a vote to pass the controversial budget repair bill at the Capitol on March 10, 2011. 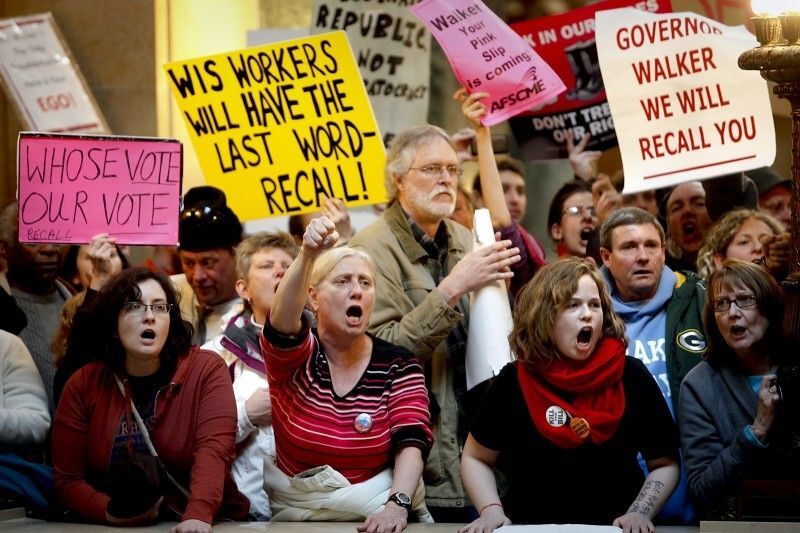 Protesters deride Republican legislators with shouts of "Shame!" after the the Assembly passes the governor's collective bargaining bill on March 10, 2011.

But he also cited community projects such as the Read Up Madison Fund campaign, which raised more than $250,000 to buy books for a summer school reading program, and the WSJ Scholars program, an internship program for students of color at the UW-Madison School of Journalism and Mass Communication.

“We’re a community player,” Smalley said. “We want to be a community asset and engage people who want to move the community forward.”

Shah said Smalley deserves credit for launching the internship program as well as the Center for Journalism Ethics at UW-Madison.

“I appreciate what an important role John played in getting that center to a level of national prominence,” Shah said.

Smalley said he intends to pursue other communications project work in the local market. He and his wife, Barbara, live in Verona.

“For a lot of reasons, personal and professional, this feels like the right time to step away,” Smalley said. “I know there are challenges ahead for the State Journal and all of the newspaper industry, but our audience is still huge — larger than ever between print and digital. We’re still reaching the vast majority of news consumers in the market every week.”

In a written statement, Chase said Smalley will continue to be a community asset even in retirement.

A Wisconsin State Journal special report in 2016 that explored the root causes of homelessness in Madison, obstacles to solutions and its insi…

“John is the heart and soul of the Wisconsin State Journal and has been for years. His contributions to the capital city’s newspaper — and to journalism in general — will leave a lasting legacy, and I’m proud to have worked with him during his career. He knows the stakes and value of providing a trusted flow of the most relevant and vital information for our readers.

“John’s passion for Madison and the greater state will no doubt continue into his retirement, and that is why our team at the Wisconsin State Journal will work to keep him engaged with our mission as much as we possibly can.”

The Wisconsin State Journal and Madison: A 'trusted relationship' for 175 years

State Journal reporters no longer shine editors' shoes. They do on occasion volunteer to pet-sit an editor's chickens.

The first 15 years: From weekly 'Express' to daily 'State Journal' (first in a series of 12)

The Wisconsin State Journal at 175: The Civil War years (second in a series of 12)

By the time the Civil War broke out in 1861, the Wisconsin State Journal had been publishing for more than 20 years. But nothing could prepare…

Just in time, railroads throw Madison a line (third in a series of 12)

The years just before and after the Civil War were difficult times for Madison. It failed to grow during the panic of 1857, when real estate v…

The end of the 19th century and the start of the 20th saw times of transition for the Wisconsin State Journal and the University of Wisconsin.

“I pledge to my city a more complete understanding of her problems, a more liberal conception of her limitations, … a more generous contributi…

With World War I over, Madison and much of the rest of the nation turned its attention to a new battle: the fight over the proliferation of saloons.

Madison and its interest in aviation were booming as the "Roaring Twenties" came to a close, with the Depression and world war looming.

For those who lived through the fight over Monona Terrace in the early 1990s, Madison in the 1950s would have felt eerily familiar.

The dawn of the 1960s brought with it the promise of change. But war on the other side of the world would soon eclipse all that.

"Zoos are a characteristic feature of parks in all large cities," the Wisconsin State Journal declared in 1911. "The zoo idea should be welcomed."

Rediscovering the jewel of Madison: The state Capitol renovation of the 1990s

After 70 years of use, the structure was showing its age. An 11-year, $141 million renovation restored the majestic building to its earlier grandeur.

Fittingly, the last installment in our 175th anniversary series proves what goes around comes around.

John Smalley got his start in journalism as a part-time sports reporter for the La Crosse Tribune in 1977.

OUR VIEW: Congratulations to the Madison Reading Project on surpassing strong goal 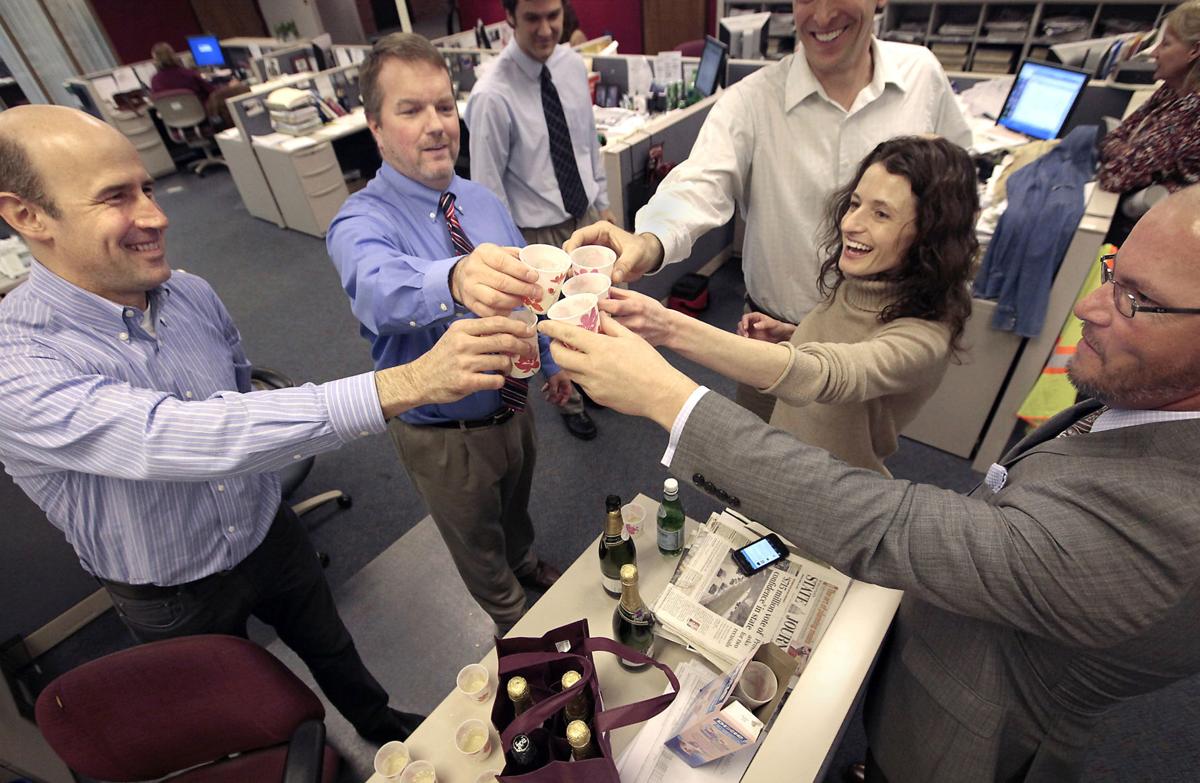 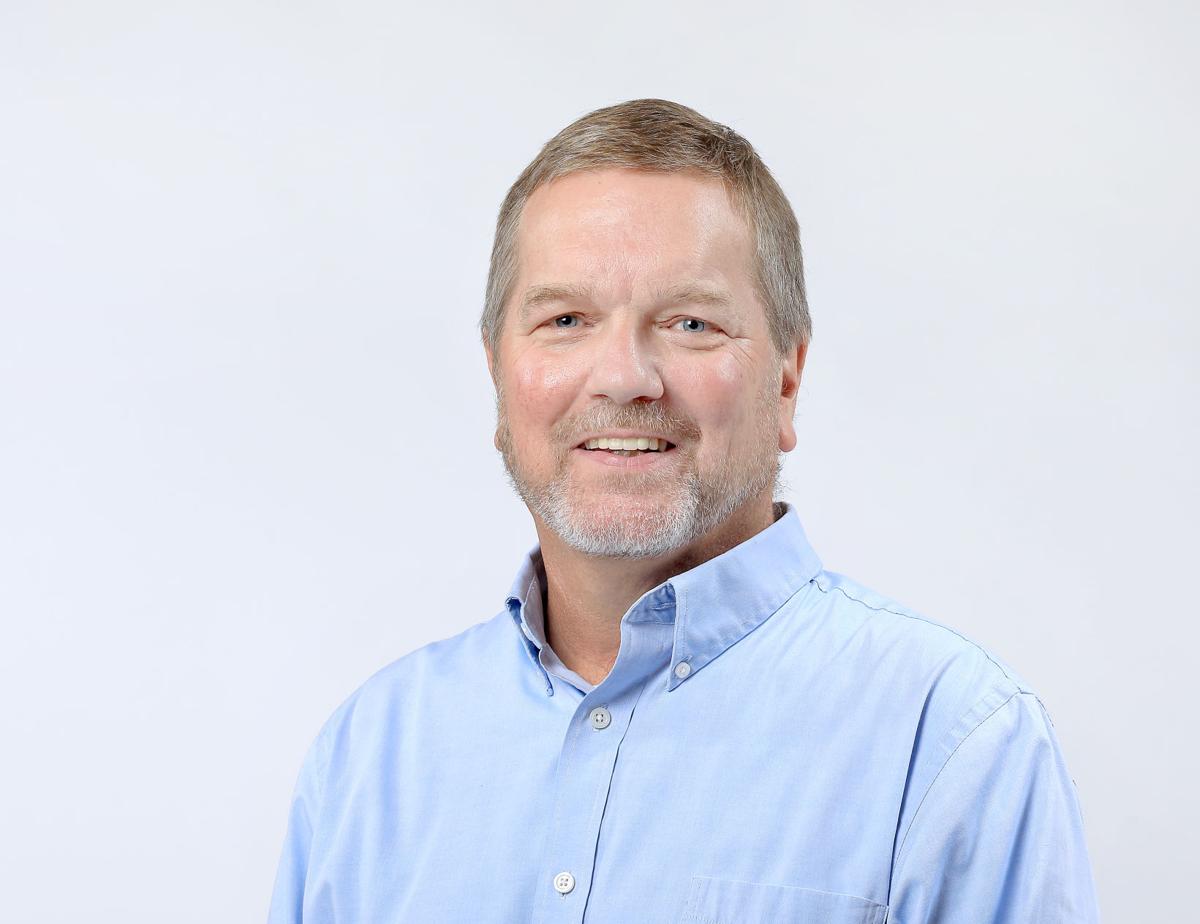