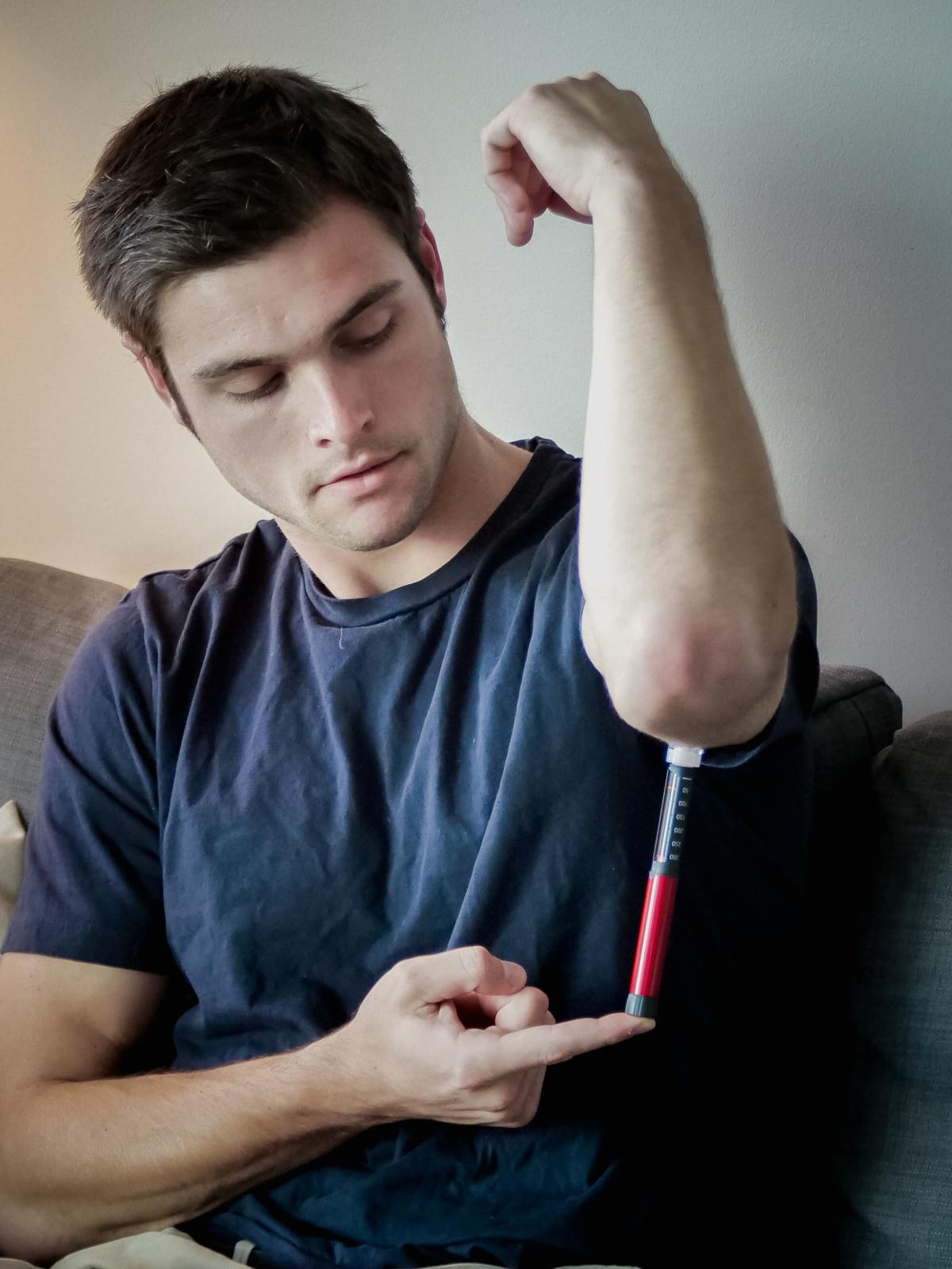 Founder Shawn Michels used Steady Shot while injecting himself with insulin. Michels said before Steady Shot, he wasn't able to inject on his arm because injections had required two hands. 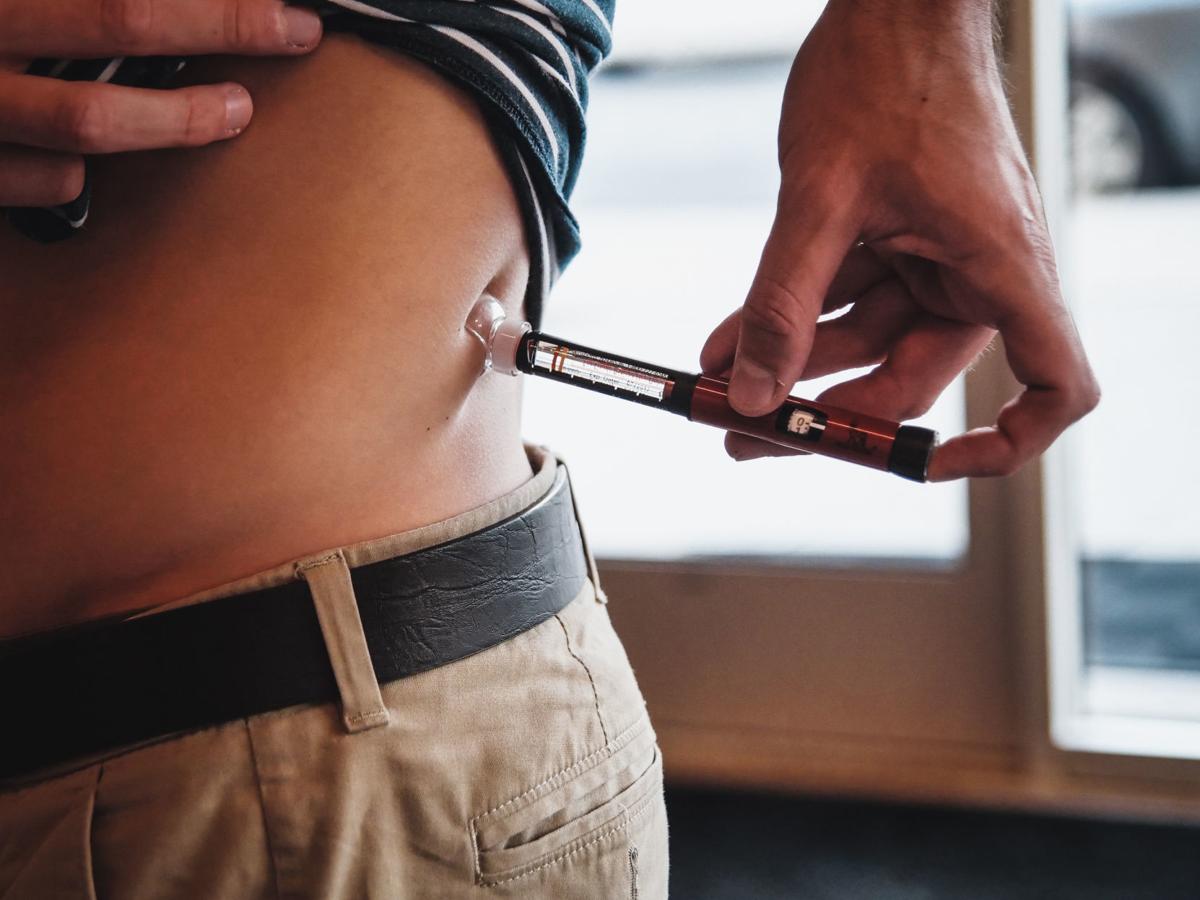 Steady Shot, the plastic arms at the tip of the insulin injection pen, makes it easier for diabetics like company founder Shawn Michels to inject themselves with insulin in areas that were harder to reach.

Steady Shot is just a small piece of clear plastic, but when attached to an insulin injection pen, inventor Shawn Michels says it can make injections easier and even lead to more effective use of insulin.

Michels, 24, devised the idea for a device to make injecting insulin easier while he was a marketing and accounting student at UW-Madison. During an entrepreneurship class, his professor encouraged students to come up with business plans to solve a problem they felt a personal connection to.

Since his Type 1 diabetes diagnosis at 16, Michels has been injecting insulin several times a day to manage his blood sugar levels. His doctors told him to rotate injections among his stomach, thighs, upper-arms and butt, but because of the need to pinch the skin with one hand and inject with the other, Michels couldn’t inject in his arms or butt.

Michels then became familiar with the side effect of injecting insulin into the same site regularly: lipohypertrophy — mildly painful lumps that can make it harder to inject the insulin and even reduce its effectiveness.

“The only way to not make your lipohypertrophy worse is to stop injecting in that area,” Michels said. “If you can’t reach other injection sites, you’re kind of forced to keep injecting into that area, so it’s just going to keep getting worse.”

Many other diabetics are also affected by lipohypertrophy. According to a meta-analysis conducted by the National Institutes of Health, about 38% of diabetics treated with insulin develop the condition.

With his own problems in mind, Michels began creating prototypes that would, in effect, pinch the skin while also steadying the needle of the pen, which Michels said can be thin enough to bend or even break off into the skin if not injected straight.

“I went to the drawing boards and came up with Steady Shot,” Michels said.

It took dozens of prototypes and work with UW-Madison before Michels landed on a two-pronged attachment which can be used on most insulin pens in production. The arms are designed to position the needle in the fat layer between the skin and muscle where insulin is best absorbed by the body.

The prototype went through three different rounds of testing with about 15 to 20 insulin users in each round, Michels said. Those trials were successful, but Michels said he also saw improvement in his own life after he started using Steady Shot.

It took a few months of injecting in more locations before the lumps from the lipohypertrophy went away, Michels said.

Now, about four years after coming up with the idea, Steady Shot is ready for purchase. Each attachment is priced at $29.95 and can be purchased without a prescription. The attachments can be detached to regularly sterilize, and Steady Shot recommends purchasing a new unit every six months.

While sales are currently open online, Michels hopes to sell Steady Shot in stores too. He plans to initially seek out independent pharmacies as retailers and eventually expand to larger pharmacy chains.

“I want to get this to as many injectors as possible,” Michels said.

And that’s not just diabetics. Steady Shot has the potential to be applied to any medical injection pen, Michels said. Injection pens can also be used to treat people with osteoporosis, children who are prescribed growth hormones and people using prescribed weight-loss medication.

Steady Shot can also be helpful for people who have recently been diagnosed with diabetes or another condition.

“When you’re newly diagnosed, injections are scary,” Michels said. “You’re going to want something to help you out. Riding a bike for the first time, you get training wheels, so Steady Shot can be like training wheels for your injection.”

While Steady Shot is ready to launch, Michels — who moved back to the Milwaukee area following his graduation in May 2018 — hasn’t been able to dedicate his entire work week to his business. He maintains a part-time job as an accountant, he said, because he needs the insurance to pay for his insulin.

Funding: $47,185 in grant funding and an ongoing crowdfunding campaign on IndieGoGo

My Pharmacy, an app feature that allows users to order refills and find a nearby pharmacy, started in January with Walgreens pharmacies. Now the service includes five of the seven largest pharmacy chains.

Founder Shawn Michels used Steady Shot while injecting himself with insulin. Michels said before Steady Shot, he wasn't able to inject on his arm because injections had required two hands.

Steady Shot, the plastic arms at the tip of the insulin injection pen, makes it easier for diabetics like company founder Shawn Michels to inject themselves with insulin in areas that were harder to reach. 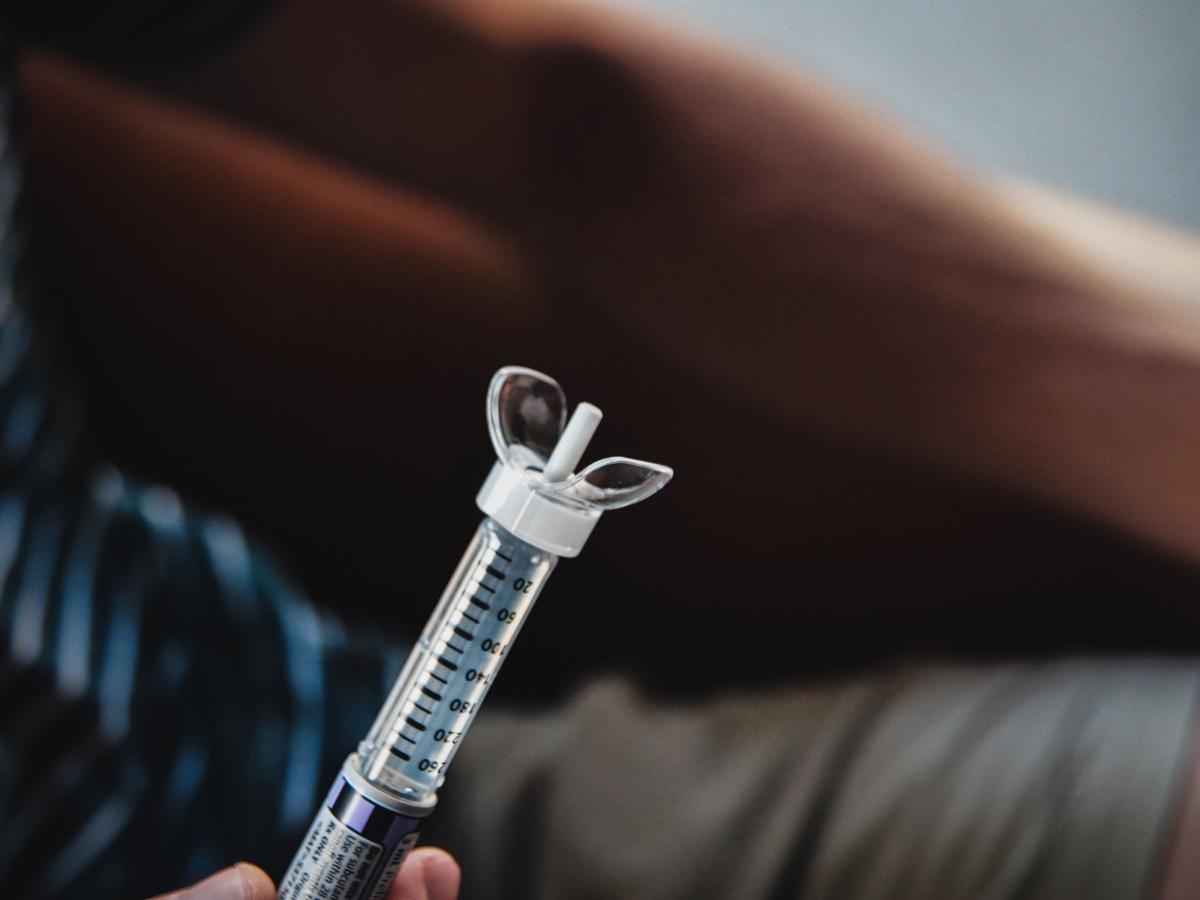 Steady Shot comes in various sizes and is able to attach to the end of most insulin injection pens.