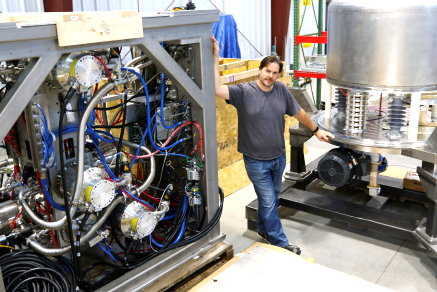 Greg Piefer, CEO of SHINE Medical Technologies, is flanked by sections of the first production accelerator delivered to the Janesville company this month by Phoenix, of Monona. SHINE plans to make radioisotopes for medical purposes through a fission process.

NorthStar Medical Technologies is not the only company on a marathon journey to become a U.S. source of molybdenum-99 and technetium-99m.

SHINE Medical Technologies plans to begin construction of a plant in Janesville next spring with commercial production expected to start in 2021.

SHINE crossed a major hurdle this month when it received its first production accelerator. The unit was built by Phoenix, a Monona company that builds neutron and proton generators for the health, energy and defense industries. SHINE split off from Phoenix, formerly Phoenix Nuclear Labs, in 2010.

Phoenix made two prototype systems for SHINE, but this is the first one slated for commercial production.

“This delivery represents the culmination of almost a decade of joint work between Phoenix and SHINE, moving from proof of concept to proof of scale, and now to a commercial-ready unit that can produce thousands of doses of medicine per day when paired with the SHINE target,” said SHINE CEO Greg Piefer.

SHINE uses low-enriched uranium and splits the atoms into two in a fission process to produce moly-99. Containers provided by customers including GE Healthcare and Lantheus Medical Imaging will carry the moly-99 to radiopharmacies and hospitals as it decays to technetium-99m.

SHINE already has one building constructed at its Janesville site. It will be used to test the new equipment over the next few months — without handling uranium.

But first, the huge accelerator has to be reassembled. Standing 30-feet tall and weighing 20,000 pounds, it took two semi-trucks to transport the machine, in pieces, on a 40-minute ride from Monona to Janesville, with Janesville police and Rock County Sheriff’s deputies serving as vehicle escorts, said Katrina Pitas, SHINE vice president of business development.

“So much hard work has gone into producing the machine ... (the) trucking of it was a big deal for us,” Pitas said.

SHINE won’t disclose how much the accelerator cost, but Phoenix has said its machines generally cost from $1 million to $10 million.

Eventually, SHINE plans to have eight isotope production systems, each with its own Phoenix neutron generator.

SHINE starts construction of the first building in its Janesville campus

The Monona company plans to build its operation in Janesville and employ about 150.

The two companies are moving forward with separate technologies to produce a key radioisotope.

A New York investment firm will provide $150 million to build the plant that will be used to make molybdenum-99.

SHINE will make a radioisotope that's in short supply, and is critical for millions of common medical diagnostic tests.

The manufacturing facility will be built along Highway 51, on land given by the city of Janesville as part of an incentive package.

SHINE Medical to make cancer-fighting isotope for researchers in Prague

The Janesville company is building a factory to make radioisotopes for medical purposes.

Greg Piefer, CEO of SHINE Medical Technologies, is flanked by sections of the first production accelerator delivered to the Janesville company this month by Phoenix, of Monona. SHINE plans to make radioisotopes for medical purposes through a fission process.