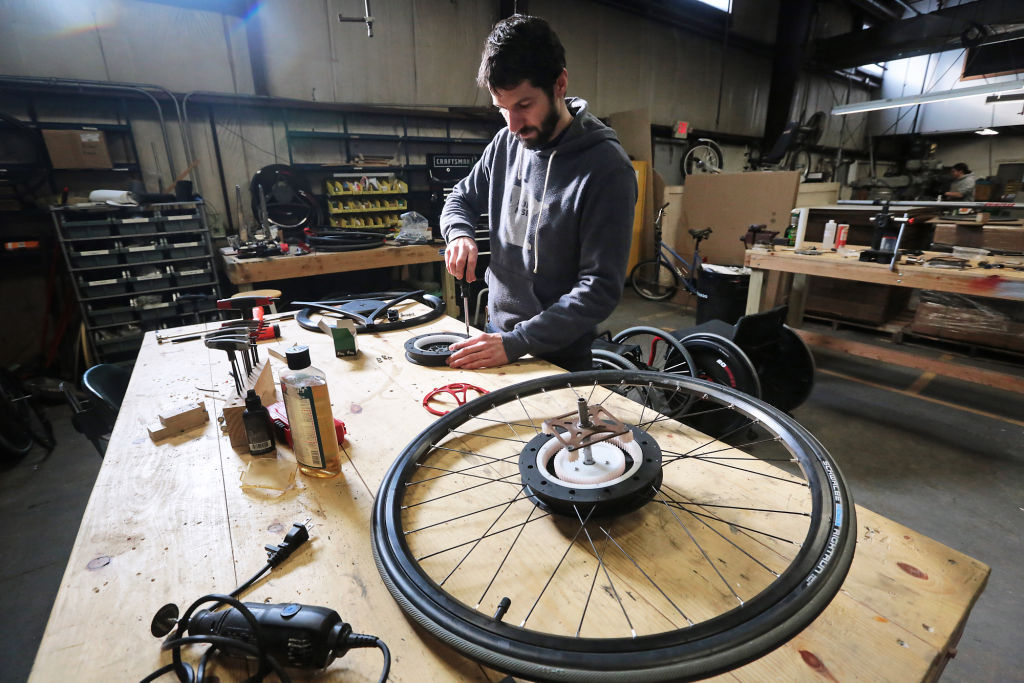 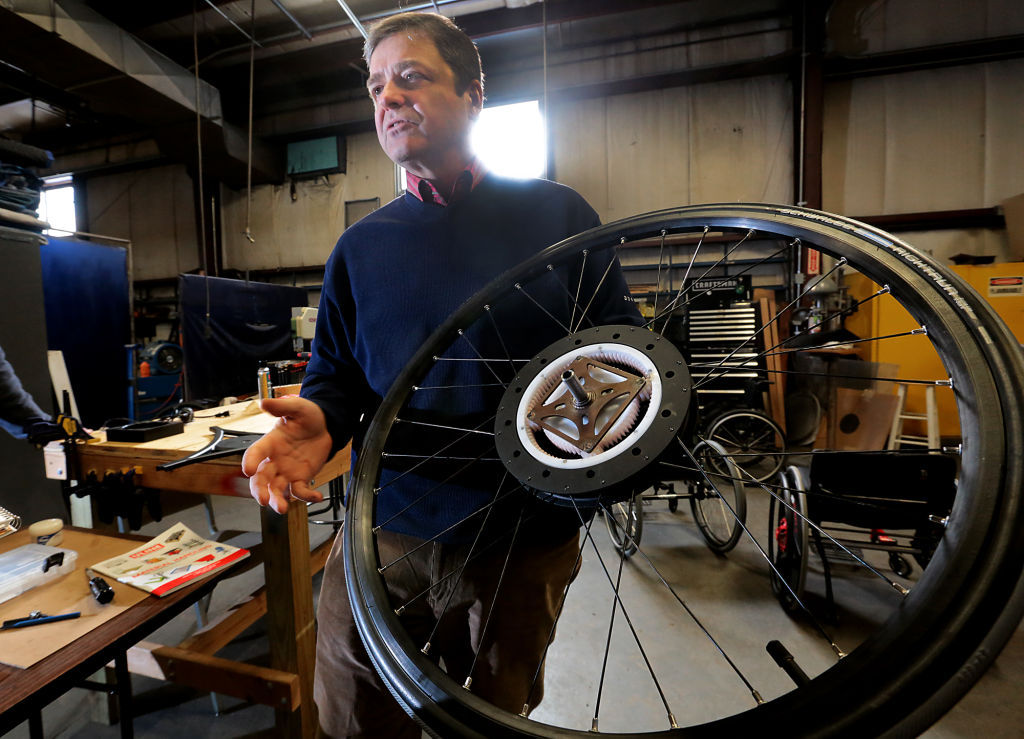 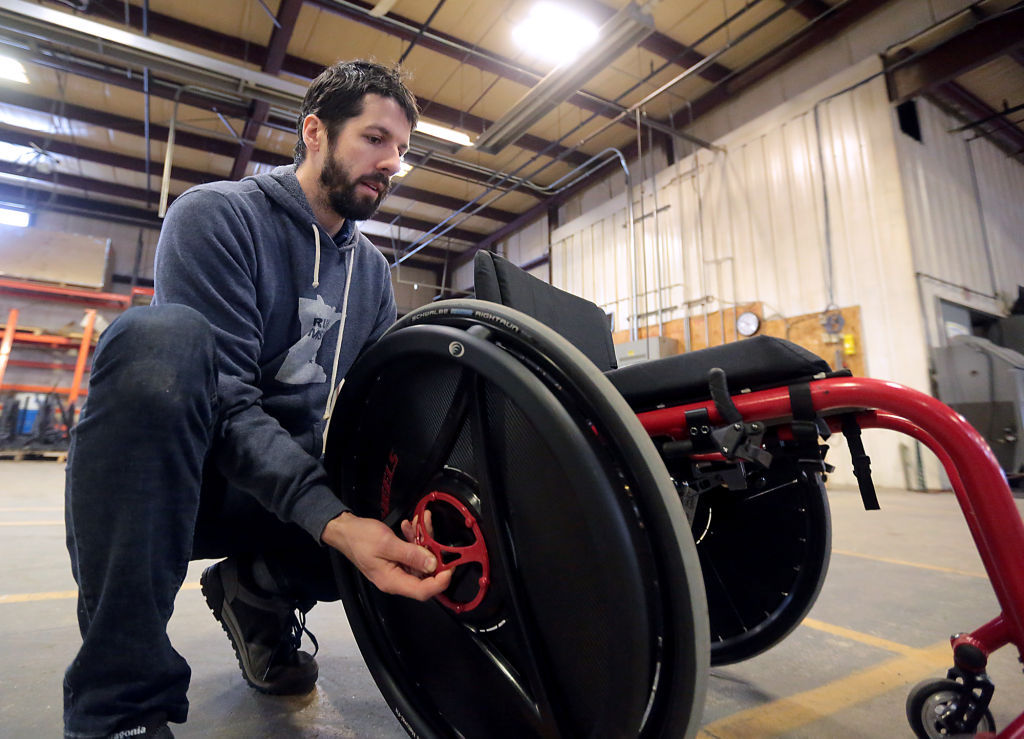 Brandon Norsted, prototype manager for Rowheels, attaches the company's Rev1 wheels to a wheelchair frame. Rowheels, in Fitchburg, doesn't manufacture the frames but plans to make its specialized wheels in a variety of sizes to retrofit different wheelchair frames. 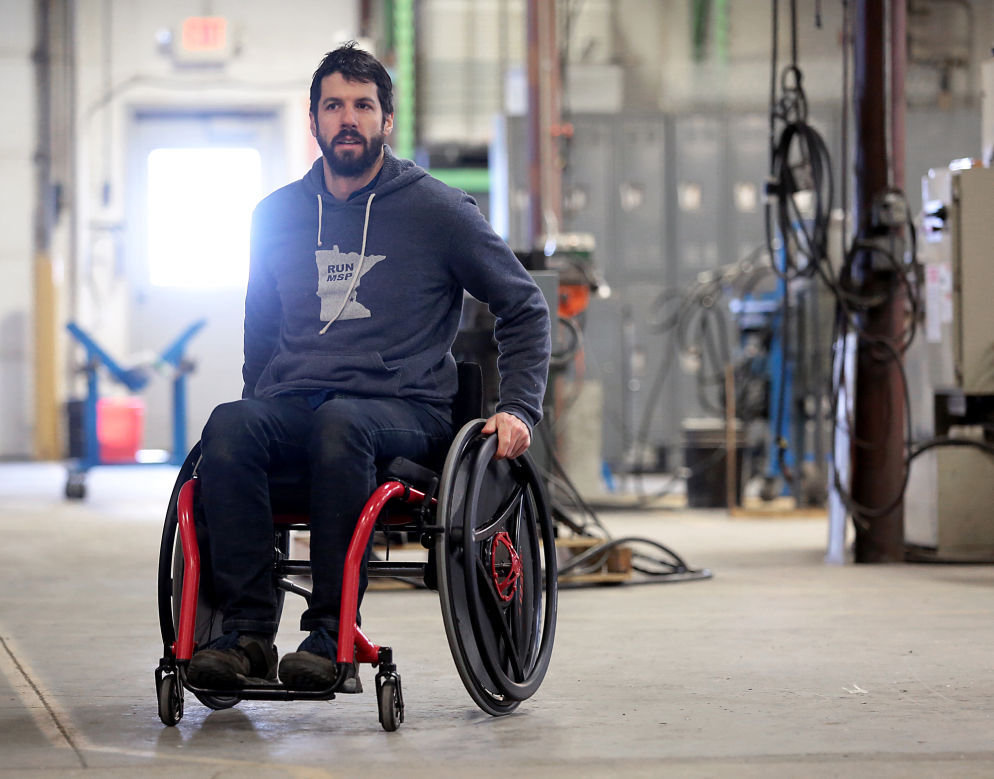 Brandon Norsted, prototype manager for Rowheels, tests out the set of Rev1 wheels he just finished assembling at the company's Fitchburg space. 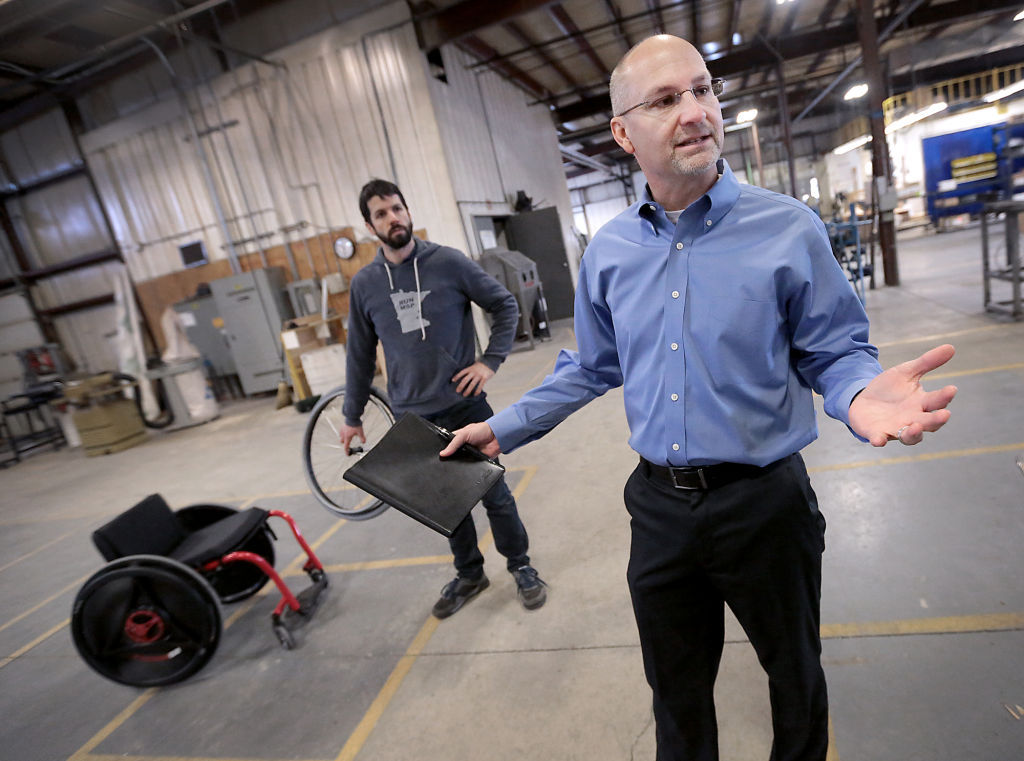 Brad Reinke, right, executive vice president of Rowheels, says the Fitchburg company's Rev1 wheelchair wheels will have their "major launch" this week at the International Seating Symposium in Nashville. 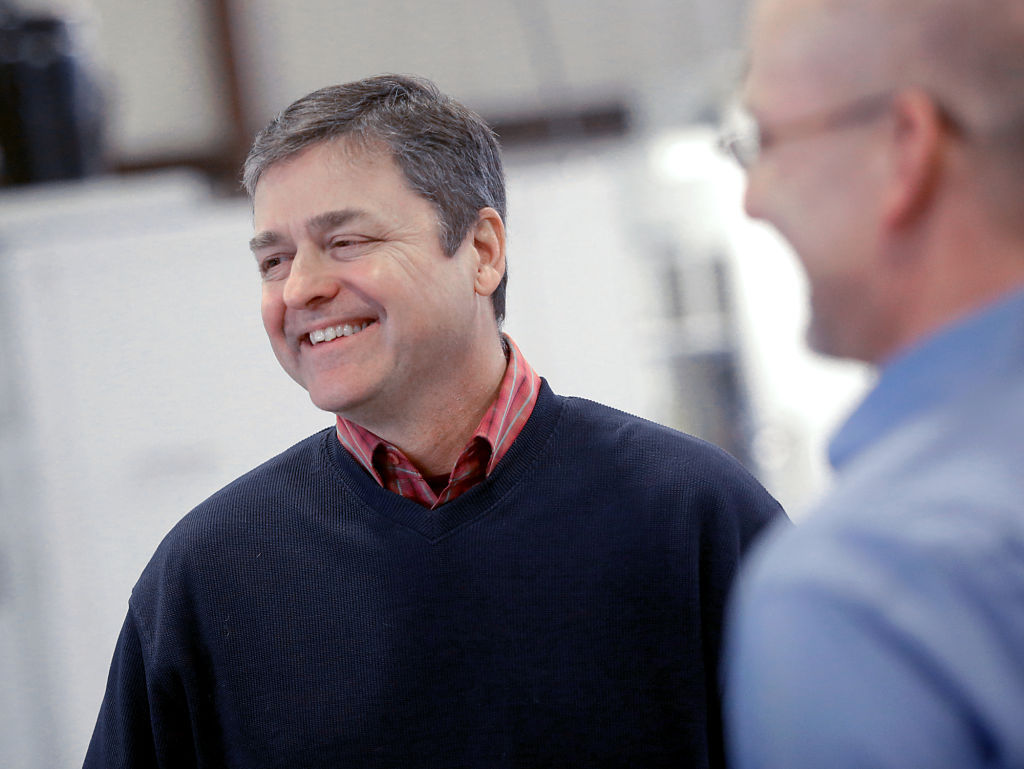 Take a Madison entrepreneur, put him in a situation outside his comfort zone, and just watch him figure out a novel way to approach it.

That’s what led to the creation of Rowheels, a Fitchburg company rolling out its invention: Rev1, a new type of wheels for manually operated wheelchairs.

The novelty is instead of pushing the wheels forward to move forward, the wheelchair occupant pulls Rev1 wheels back, toward the body, to move forward — similar to the motion involved in rowing a boat.

Maiers has not seen the Rev1 but he said, “The concepts on which it’s based would make sense to me.”

After three years of refining the design, sourcing parts and testing prototypes, Rowheels is now manufacturing and shipping its first products. They are not wheelchairs, but rather, a set of wheels to retrofit a variety of chair designs and sizes,Buinevicius said.

“I think there’s a pretty big vision on where this could go,” said Buinevicius, who led the Madison publicly traded, streaming company Sonic Foundry for more than a dozen years.

Could it be a game-changer for the manual wheelchair industry worldwide, estimated by WinterGreen Research to reach $2.9 billion by 2018? “Oh, absolutely,” Buinevicius said.

Rowheels is a classic example of local companies working together.

Rowheels assembles its counter-rotating hubs by hand and drives them less than a mile away, down McKee Road (Highway PD) to Saris Cycling Group, 5253 Verona Road, also in Fitchburg.

Saris adds the spokes, wheels, tires and tubes. Then the wheels go back to Rowheels where they are fitted with a custom hand rim and axle assembly.

For Saris, which has made bicycle racks for 40 years — the first 15 as Graber Products — the Rowheels work will “fill in nicely” with its own product lines that focus on parking and vehicle racks for the summer and stationary bikes for the winter, said Jason Seefeldt, manufacturing engineer.

Saris employees insert spokes into the hub manually, and machines bolt the spokes into the rim and tighten them. Then rubber tires are fitted on, and the wheels head back over to Rowheels, where a custom hand rim, axle and hubcap are added.

Rowheels is housed in the Renascence Manufacturing building, 2895 Commerce Park Drive, sort of an advanced manufacturing hub set up in 2010 by Jeff Jenkins, who ran his own contract manufacturing firm, Jenkins Research and Manufacturing, at the location for 20-plus years.

Some of Rowheels’ components come from Wisconsin companies, such as the gears from Kleiss Gears, Grantsburg, which are embedded in the hubs, and hubcaps and other plastic parts from OMP (Oconomowoc Molded Products).

“We always felt, from the beginning, that Wisconsin would be a perfect place for this. There’s so much expertise in the cycling industry with (bicycle maker) Trek (in Waterloo) and (motorcycle company) Harley-Davidson. We’re dealing with suppliers for Harley-Davidson in the Milwaukee area. That know-how in Wisconsin shouldn’t be underestimated,” Buinevicius said.

The whole idea for a new way to maneuver a wheelchair was hatched from an accident in 2011.

Buinevicius was in a sailboat in the middle of Lake Michigan, practicing for a sailing race, when he went down to the lower deck, slipped on some lines and broke his leg. He maneuvered around in a wheelchair for eight weeks — the kind of manual wheelchair that’s self-piloted, by pushing forward on the wheels to go forward.

“After two days of doing that, my shoulders were aching, my triceps were hurting,” Buinevicius said. He figured there had to be a better way.

An Internet search led him to Salim Nasser, a NASA space engineer who had been in a wheelchair for 15 years after a car crash in his native Colombia left him partially paralyzed. Nasser had worked on a project with reverse gears for his mechanical engineering master’s degree. At NASA, for a design competition held by the agency, Nasser built a prototype wheelchair that moved forward by pulling back on the wheels.

Not long after, Buinevicius found the design online and became partners with Nasser; Rowheels began in 2012.

One goal was to make the wheels as lightweight as possible, so a magnesium alloy — 25 percent lighter than aluminum — is used for the Rev1 structure, Buinevicius said.

Rowheels also wanted to offer a better way to stop a wheelchair rolling downhill. Now, the chair’s occupant has to grab the wheels by hand, which can demand quick action and substantial strength.

The Fitchburg company added a triple brake pad system on each wheel, like a car’s disc brakes, so the user just has to press the rims against the wheels to stop.

“This was a big feature that we didn’t appreciate until we started showing at trade shows,” Buinevicius said. He said people in wheelchairs noticed it instantly and were excited about it.

Rowheels received a patent for its Rev1 wheel design in January.

UW Hospitals’ Maiers said the mechanics of pushing a standard wheelchair can cause physical strain. “Our arms and upper body didn’t evolve to do that task. They tend to overdevelop certain muscles and overstretch certain others,” resulting in problems such as tendinitis or rotator cuff tears, said Maiers, who has heard about the Rev1 but has not seen it demonstrated.

“Their product uses the opposite muscle motion to try to make the wheels move,” he said. “As a therapist who works with individuals who use wheelchairs, I can see how ... (the Rev1) could alleviate some of the problem,” Maiers said.

He said, though, long-term wheelchair users might be more apt to choose a specialized product like the Rev1 than those with new injuries.

Rowheels is the first project of Madcelerator, a business development and capital raising firm that consists of Buinevicius; his wife, Jan Moen; and Brad Reinke, who worked with Buinevicius at Sonic Foundry. When a division of Sony Corp. bought Sonic Foundry’s music and video creation software in 2003, Reinke led the operation, later called Sony Creative Software, serving as senior vice president for a decade.

Madcelerator is advising and investing in several other start-ups, Buinevicius said.

“We want to help entrepreneurs who need a way to accelerate their businesses and bring in a seasoned team,” he said.

So far, Rowheels has raised about $1 million, including funds from angel investors, to move the Rev1 forward. The company got some glory, early on, when it won the Wisconsin Governor’s Business Plan Contest in 2012 and then took the prize for best innovation in the New York Venture Summit’s life sciences category in June 2014.

Rowheels has four employees — in addition to the Madcelerator trio — including a national sales manager in Ann Arbor, Michigan. Reinke said independent sales representatives are being hired to market the Rev1, primarily to rehabilitation hospitals and clinics right now, Reinke said.

He said he hopes the company will have 10 to 15 sales reps by this summer.

The wheels, custom-made to fit a variety of frame sizes, are designed to tilt inward slightly.

“Right now, our initial market is going to be the higher-end, primo type of product that really appeals to strong paraplegics, wheelchair athletes and veterans in the Veterans Administration system,” Buinevicius said.

He said the Rev1 wheels could also be used as an exercise device, for example, to strengthen the shoulders of people with rotator cuff injuries, or for people with spinal cord injuries, multiple sclerosis or stroke patients.

“We haven’t built these to be sport chairs but that could be in the future,” Buinevicius said.

A set of Rev1 wheels costs $5,400 but Medicare, which already has approved the device for reimbursement, will cover a big share of that, he said.

Rev1 is not likely to become an instant blockbuster, Buinevicius said, but he thinks it will gain momentum as more therapists, physicians and wheelchair users try it.

“We’re claiming it’s a safer way to propel — that’s the real game-changer for us,” he said. “It’s being recognized as a novel thing that should have been invented a long time ago.”

Rowheels rolls in an investment

WISC Partners is putting up to $1.5 million into the Fitchburg company and it new design for manual wheelchair wheels.

Tech and Biotech: Rowheels spins out a win in a New York pitch contest; two companies' plans advance to make a medical isotope

Rowheels is working on a new type of wheelchair.

Alums of the Madison streaming media company have gone on to found a wide variety of businesses, from music marketing to wheelchairs.

From surgical tools to prosthetic hands to newfangled wheelchairs, entrepreneurs are working to move inventions to market.

He is Fred Mindermann, a native of Dodgeville.

The local startup is making big changes to shake up the wheelchair market.

Brandon Norsted, prototype manager for Rowheels, attaches the company's Rev1 wheels to a wheelchair frame. Rowheels, in Fitchburg, doesn't manufacture the frames but plans to make its specialized wheels in a variety of sizes to retrofit different wheelchair frames.

Brandon Norsted, prototype manager for Rowheels, tests out the set of Rev1 wheels he just finished assembling at the company's Fitchburg space.

Brad Reinke, right, executive vice president of Rowheels, says the Fitchburg company's Rev1 wheelchair wheels will have their "major launch" this week at the International Seating Symposium in Nashville.