Mining equipment maker Weir Minerals wants to add a 90,000-square-foot foundry to its manufacturing operations on South Stoughton Road in Madison, an expansion plan that requires a DNR permit. 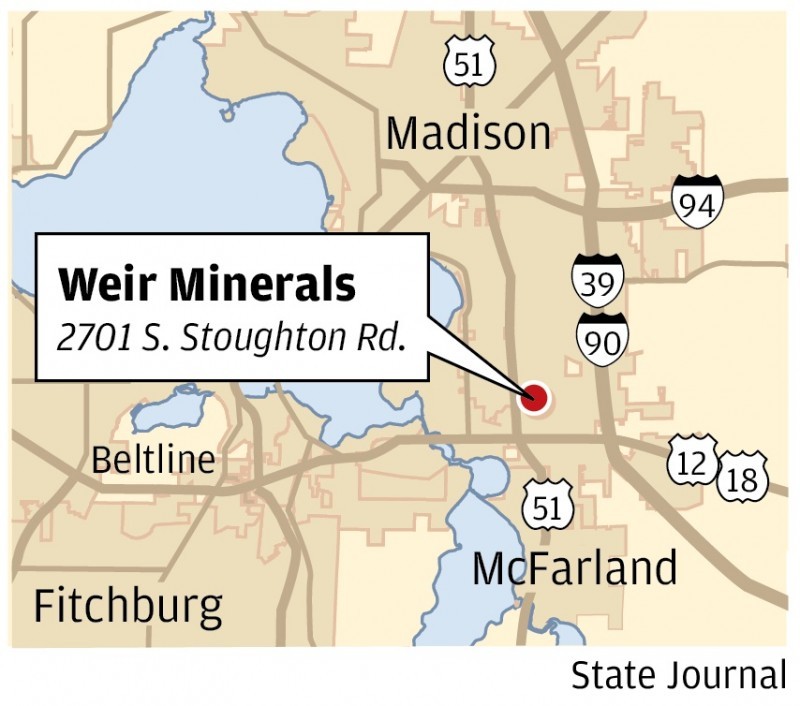 Mining equipment maker Weir Minerals wants to add a 90,000-square-foot foundry to its manufacturing operations on South Stoughton Road in Madison. The project, if approved, would add at least 100 permanent jobs and dozens of temporary construction jobs, company leaders said.

The foundry would melt and mold metal into parts for the assembly of pumps used in mining. It requires a permit from the state Department of Natural Resources to emit off-gases and particulates.

The company expected to submit its DNR application for the Minor Source Construction permit by the end of this week.

Brian Compton, Weir’s vice president for foundry operations, said the operation would not emit dangerous gases, maintaining Weir would comply with all emissions requirements required by the DNR and would follow federal rules for clean air, water and greenhouse gases.

Kerry Schumann, executive director of the League of Conservation Voters, said her review of the project suggested Weir “could expand in a responsible way” on its site at 2701 S. Stoughton Road, provided Weir and the DNR follow “a rigorous permit process for determining the company’s air emissions.”

Schumann also expressed general concern about the DNR’s enforcement actions, which hit a 12-year low for violation notices last year under Gov. Scott Walker’s administration. DNR officials said the drop was due to job vacancies and an emphasis on phased enforcement, which they argue is more effective than pursuing prosecution more quickly.

“We would hope that the DNR doesn’t cut any corners in doing the permit process that would lead to any increased pollution in that neighborhood,” Schumann said.

DNR staffer Al Shea said he first met with Weir leaders in early July about the project. On Wednesday, Shea said he wasn’t aware of “any pollutants of concern or particular environmental issues” provided the company meets the permit requirements.

Shea also said the DNR would “work diligently to make sure public interests are protected” while striving to help Weir meet its desired business timelines.

The expansion is needed to keep up with increased demand for the company’s products, Compton and Weir Minerals President Mike Schoen said. The foundry will allow the company to meet that demand more efficiently, they noted, because the parts needed for assembly of the mining pumps will be built on site rather than shipped in from other locations, as they are now.

“Our parts are getting larger and larger, so transporting them from around the world is very time-consuming,” Compton said. “So Weir decided, in order to improve our service and lead time to customers, that a foundry facility would help us greatly here in North America.”

Compton said the parts they now use to assemble mining pumps are made in the United Kingdom, Chile and Australia. Those locations will focus on other business when they stop supplying parts for the Madison location.

“We won’t be closing anything,” Compton said.

Weir Minerals is a division of The Weir Group PLC, a UK-listed public company with corporate headquarters in Scotland. Weir’s North American headquarters are in Madison.

Weir spokesman Robb Clawson said the company supplies equipment for many types of mining, including sand mining, which has increased in Wisconsin in the past two years.

Weir’s foundry addition would require no zoning changes, because the company’s location already is zoned for manufacturing. The eight to 10 acres proposed for the project is within the company’s current 28-acre site, which is surrounded by businesses and not close to any neighborhoods, Compton said.

The project will require a city building permit and approvals for wastewater management, with those applications to proceed with the DNR permitting process, Compton said.

Compton noted the project also would create dozens of temporary local construction jobs and business for area suppliers. If the DNR permit is approved, the company hopes to bid out and start site work in February and begin construction in March. It will take about 10 months to finish the building, with more time needed to bring in and install equipment, with the foundry running in the first quarter of 2015.

Compton said the foundry jobs would range from entry-level maintenance work to equipment operations, design engineers and workers with specialized metallurgical skills. He said he would expect at least 100 workers to be hired by early 2016.

Weir leaders said the company would build the foundry at a different U.S. location if the permit is denied, they said, but they downplayed that possibility.

“We really hope that (the project) works out here,” Schoen said. “If it doesn’t, we’re going to have to make other plans, but our primary plan is to make it work in Madison.”

The company’s current manufacturing process does not require a DNR permit because the machining and assembly equipment used doesn’t produce regulated emissions.

If you haven't saved as much as you would've liked for retirement, Social Security could bail you out.

How to fill in your financial blind spots

Mining equipment maker Weir Minerals wants to add a 90,000-square-foot foundry to its manufacturing operations on South Stoughton Road in Madison, an expansion plan that requires a DNR permit.