MIDDLETON — You won’t see the name of the company — Pharmaceutical Product Development — on the label of any of the drugs you buy at your local pharmacy.

But it may ease your mind to know that PPD Laboratories, in Middleton, plays a crucial role in testing many of the pharmaceutical products now available before — and after — they reach the market.

Privately owned PPD, based in Wilmington, North Carolina, is a contract research organization that provides a range of services for pharmaceutical and biotechnology companies.

Its Middleton laboratories are a major part of the drug development process, analyzing the key ingredients in drugs and testing the way drug-administering devices work to make sure they do what the manufacturers say they do.

“We ensure that the drugs people are taking around the world are safe and effective,” said Jon Denissen, senior vice president of PPD Laboratories and leader of the Middleton site.

PPD has been quietly expanding its operations in Middleton over the past few years, moving up from the 15th largest employer in Dane County in 2016 with 950 employees, to No. 10 in 2017 with 1,300 employees, and this year, No. 9 with 1,500 employees, according to the Wisconsin State Journal’s annual Book of Business.

And the growth continues.

“We’re in the midst of frantic hiring to operate this laboratory,” he said.

PPD now covers 310,000 square feet of labs and offices, including its cluster of buildings just west of the Greenway Station shopping center, two floors of the Greenway Commons office building and a building on Pleasant View Road, built in 2016.

The company is, by far, Middleton’s largest employer. No. 2, Electronic Theatre Controls, is a little over half the size with about 850 employees.

PPD began in 1985 as a one-person consulting firm. Today, the company has 20,000 employees and offices in 47 countries.

PPD stock was publicly traded from 1996 until 2011, when it was purchased by affiliates of The Carlyle Group and of Hellman & Friedman in a transaction valued at about $3.9 billion.

The company does not release its annual revenue. A Wall Street Journal story, quoting “people familiar with the company’s finances,” said PPD expected $2.8 billion in revenue in 2017, according to a report by the FierceBiotech website in December 2016. A spokesman for the company declined to say if that figure was accurate.

PPD has two GMP (good manufacturing practices) labs that meet federal requirements for manufacturing and testing pharmaceutical products — the one in Middleton and another in Ireland. It also operates laboratories in Virginia, Kentucky, China, Belgium and Singapore. Middleton is the largest.

PPD would not provide average salaries, but about 70 percent of the company’s employees have bachelor’s degrees or higher.

“We employ an extremely large number of scientists at all degree levels,” Denissen said.

Over the past three years, PPD has added 500 employees in Middleton and “recruited heavily” from the UW System, Denissen said. In fact, the company hired a university relations specialist to maintain a year-round relationship, he said, and may expand that to private universities and colleges around the Midwest.

PPD says on its website that it has worked on development programs for all of the top 50 pharmaceutical companies and more than 750 biotechnology companies, with services that include conducting trials, managing data, laboratory analysis and strategies to win regulatory approval.

The company says it played a role in developing 39 of the 62 drugs approved by the U.S. Food and Drug Administration in 2017.

Inhalers are tested to see if the device delivers the same amount of a drug from the first breath to the last, he said.

Denissen, a Green Bay native, earned his bachelor’s degree in chemistry at UW-Madison and doctorate in organic chemistry at the University of Illinois and has worked at PPD for three years, after holding positions at Abbott Laboratories and at Covance.

New Jersey-based Covance, part of Laboratory Corp. of America (LabCorp), is also a contract research organization involved in drug development with a large operation in the Madison area.

It is the sixth-largest Dane County employer, with more than 2,000 employees in Madison, and is known for conducting early-stage clinical trials here.

By contrast, Denissen said PPD’s role in Middleton is directly with the drug itself. “We work with a compound from its early conception ... all the way to being sold to patients around the world,” he said.

Stephen Gacheru, executive director of biopharmaceuticals, said it’s a first, as far as he knows. “I’ve never seen this kind of configuration,” he said. Gacheru came to PPD in Middleton from Bristol-Myers Squibb in Boston two years ago.

Laboratory manager Lynda Murray, a 14-year PPD employee, said the drug testing has special significance for her family. Her two young daughters were both diagnosed with autoimmune diseases. The drugs prescribed to them were tested at PPD’s Middleton labs and the girls are doing well, Murray said.

“It really brings home the value in what we’re doing,” she said.

Remodeling and expanding the TDS space and adding parking is a $29 million project that is still being completed.

The city of Middleton provided $2 million in tax incremental financing to help pay upfront costs to PPD, which leases the space, and the building owners, with the assumption that the money will be recouped through higher taxes they will pay.

The agreement with the city does not specify how many jobs PPD would be required to add, but Middleton city administrator Mike Davis said that was not a concern.

“All along PPD was adding jobs ... so that was a given,” Davis said.

Denissen said the biopharmaceuticals group at the Middleton labs, which started in 2002, is using several types of techniques to test proteins and nucleic acid-based drugs and is the fastest-growing segment of the business.

“We’ve worked on some of the recent gene therapies that have been approved,” he said.

Denissen said it is critical for the University of Wisconsin and other schools in the region to maintain their strength because being able to hire their graduates allows companies like PPD to grow.

“They are the lifeblood for a lot of life science companies within the state,” he said.

Touting the area's biotech hub together

With the growth of companies such as PPD Laboratories in Middleton, it has become increasingly important for the Madison area to be recognized as a life science hub, said Jon Denissen, senior vice president and head of the local PPD operations.

"So we can attract experienced scientists from around the country," Denissen said. "We're competing nationally for talent."

Members of BioForward Wisconsin, the organization promoting the state's biohealth industry, are banding together on an initiative to attract employees and retain them, said Lisa Johnson, BioForward CEO.

"PPD has been a strong supporter of this initiative," Johnson said.

She said BioForward has enhanced its Career Center -- a list of available positions in the industry -- and has been conducting a LinkedIn campaign aimed at graduates of the UW-Madison, UW-Milwaukee and Marquette University who live out-of-state.

The organization has compiled a brochure that companies can take to job fairs or send to prospective employees. A Women in Biohealth group is another effort, supporting women in the industry, Johnson said.

"The biohealth sector is a major employer in Dane County," Johnson said.

But she said a lot of prospective employees don't realize how many options are available here.

Changing that perception "is one of BioForward's major projects this year," Johnson said.

PPD is one of Middleton's largest employers and one of the biggest biotechs in the Madison area.

The initiative features a new UW-Madison institute and a shared laboratory space in University Research Park. 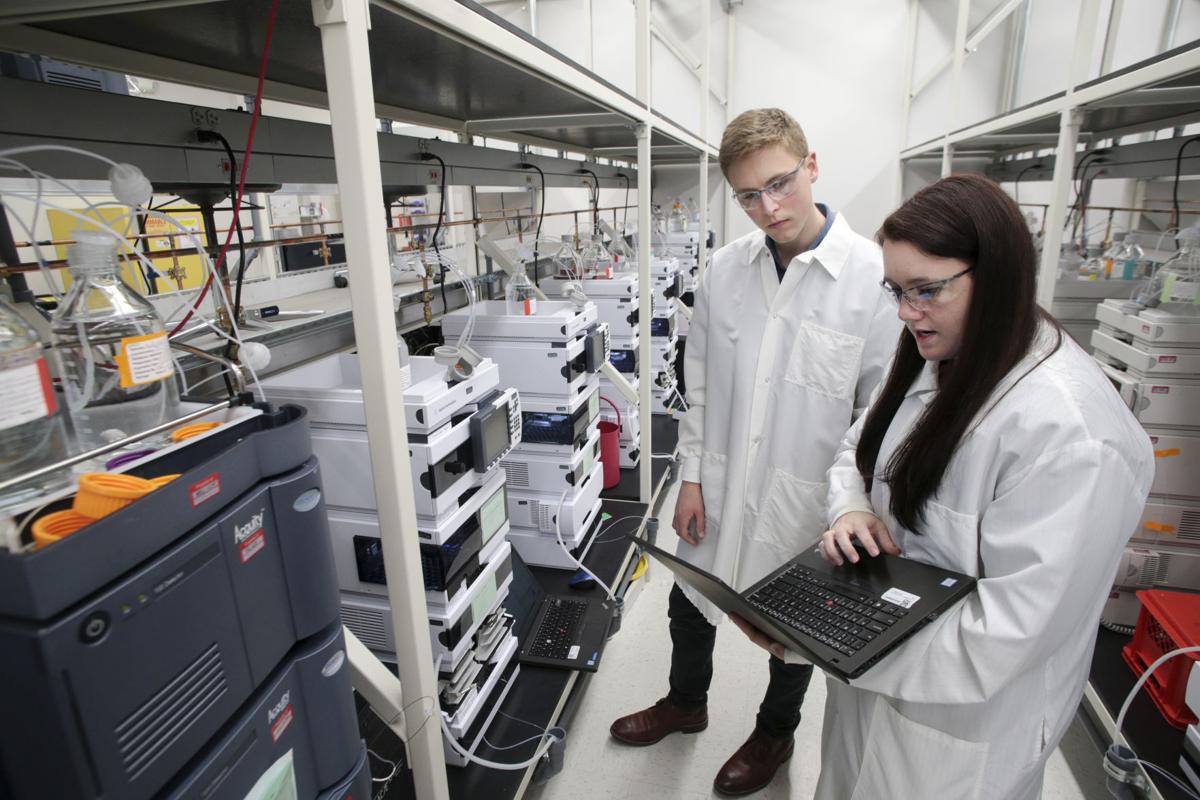 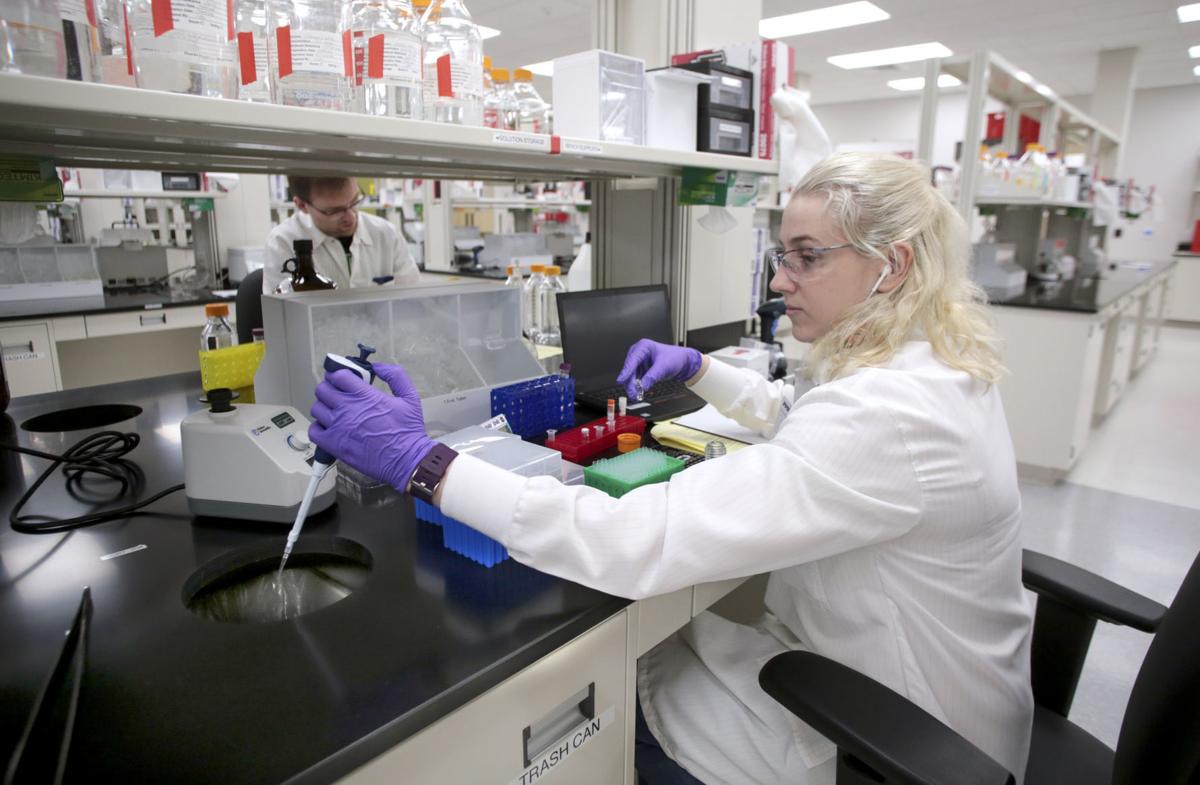 Nick Cherry, left, and Larissa Yusko, biopharmaceutical scientists at PPD, Middleton, work in one of the company's labs. The contract drug testing company, based in North Carolina, has been rapidly expanding its Middleton facilities and is now the Madison area's ninth largest non-government employer, with 1,500 employees. 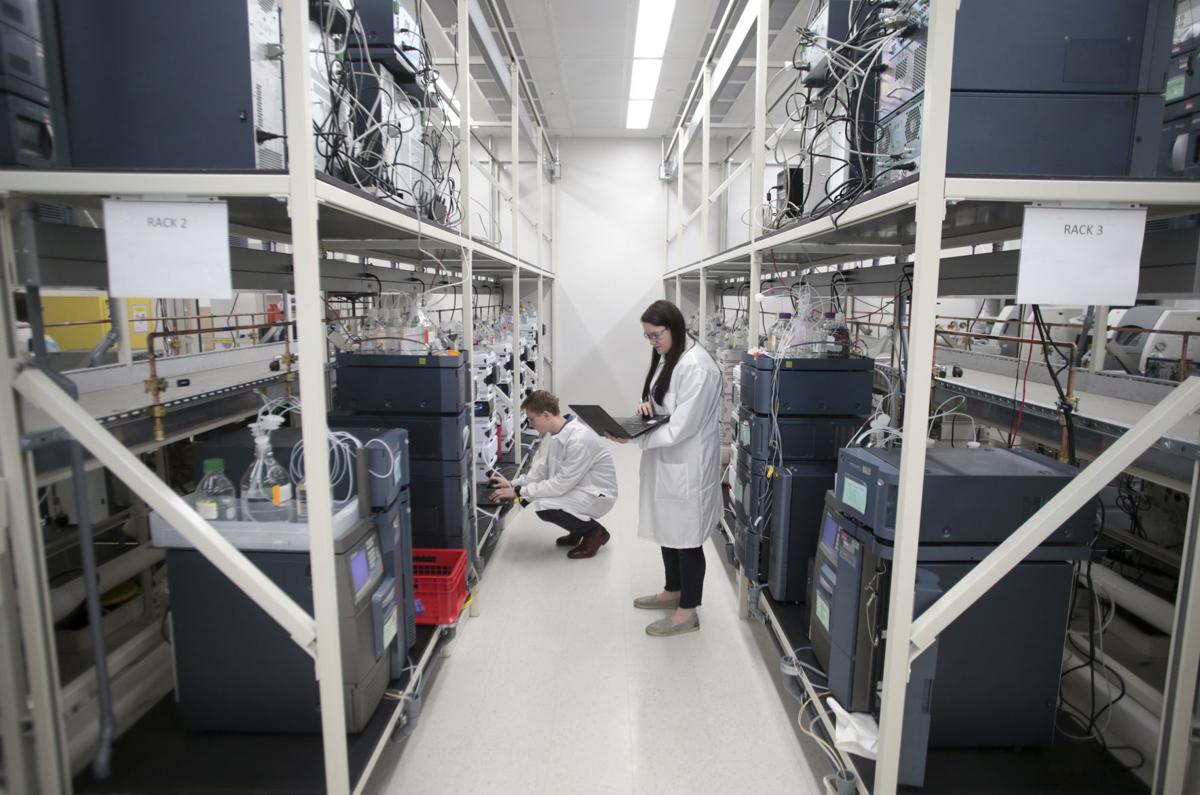 PPD biopharmaceutical scientists Max Meller and Michelle Collier go over results of system tests. PPD analyzes drug compounds for some of the largest pharmaceutical companies in the world. 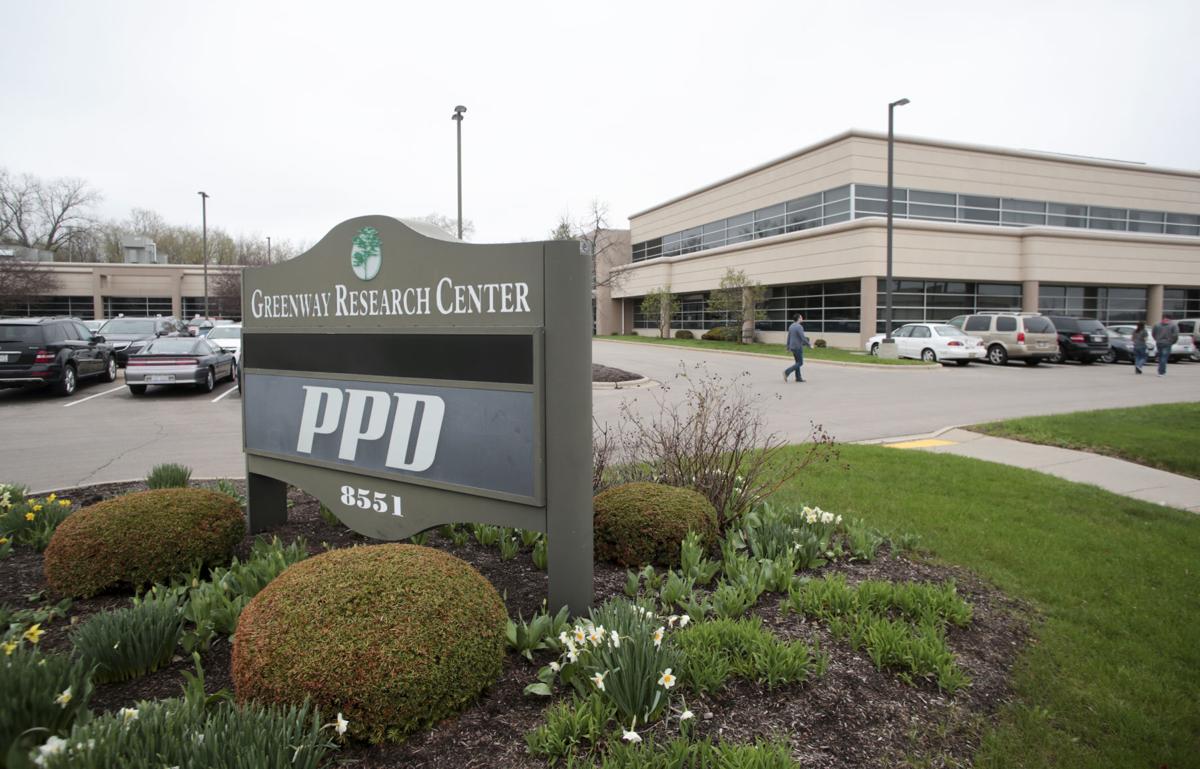 PPD Laboratories, a contract drug analysis company based in North Carolina, has been rapidly expanding its Middleton facilities and now occupies more than 300,000 square feet of labs and offices, primarily west of the Greenway Station shopping center. 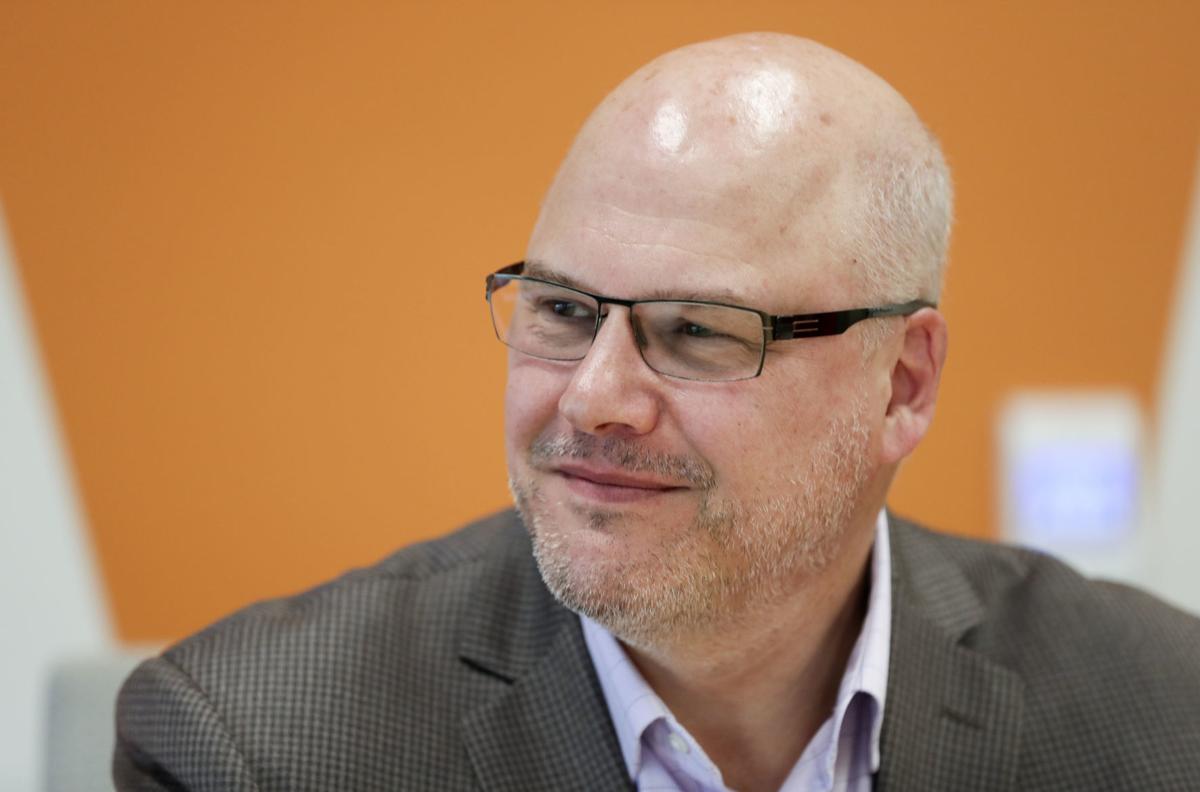 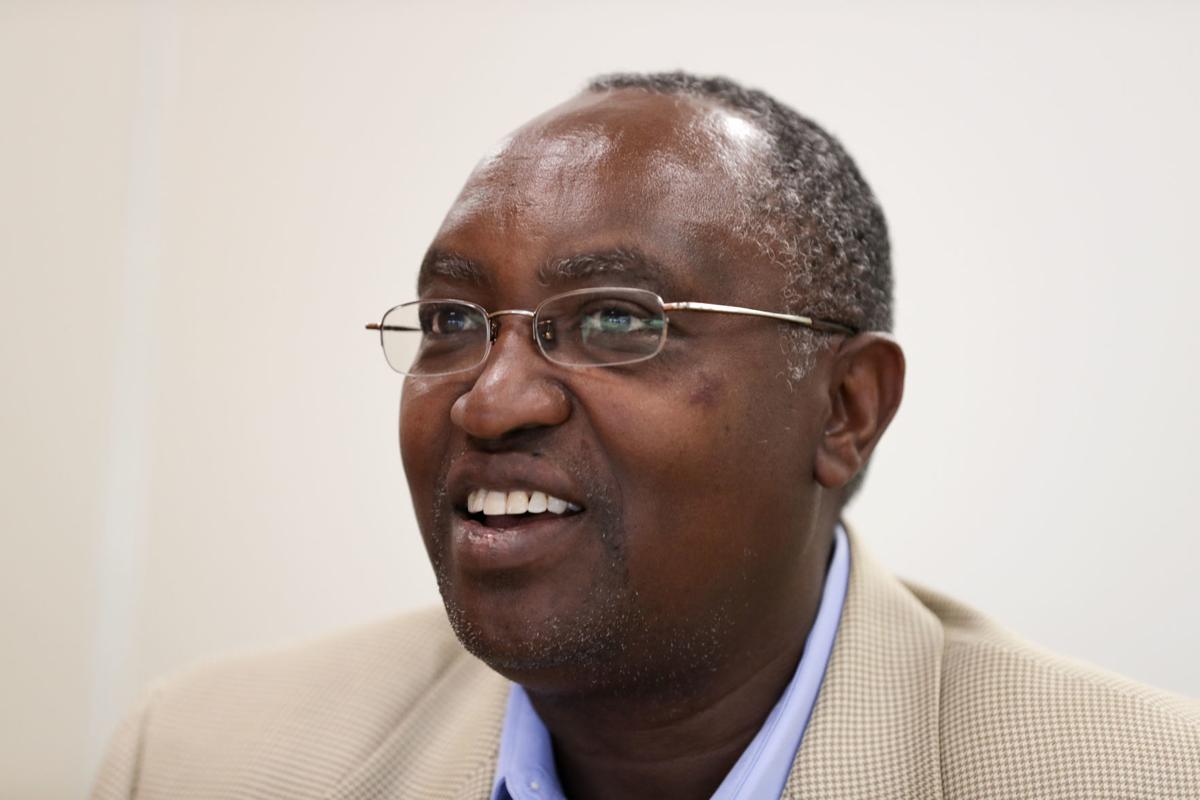 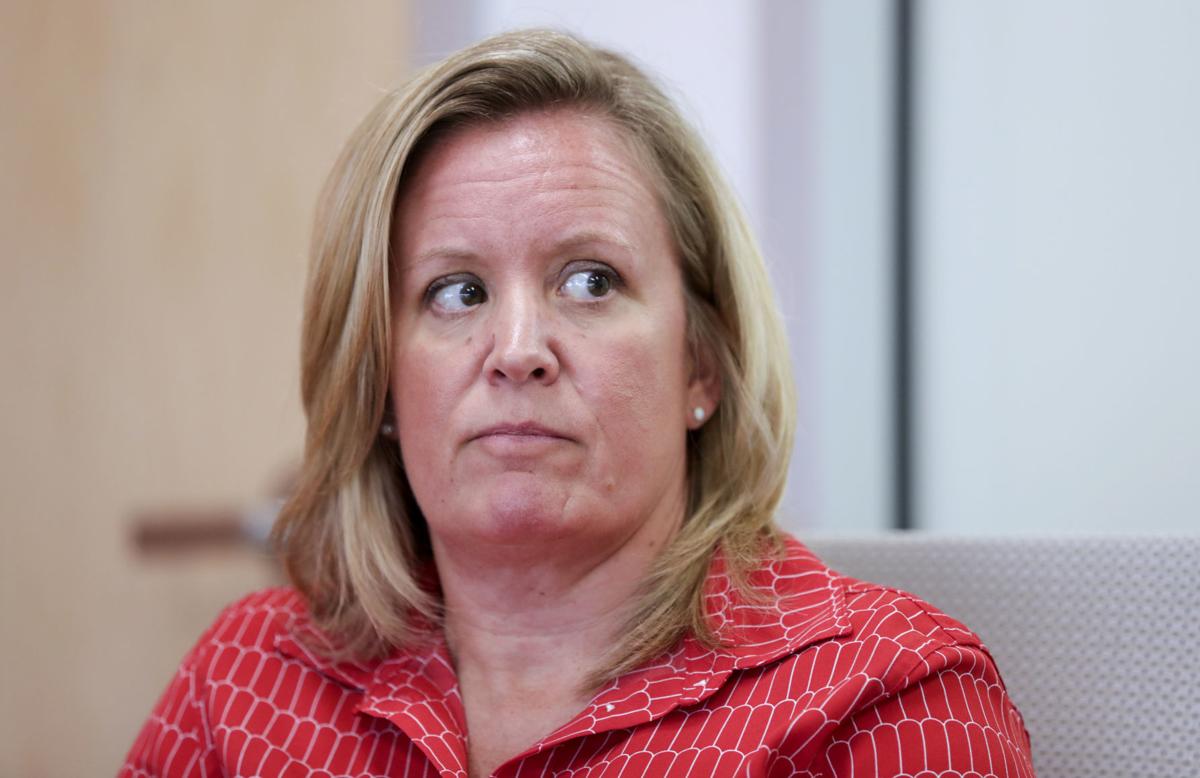