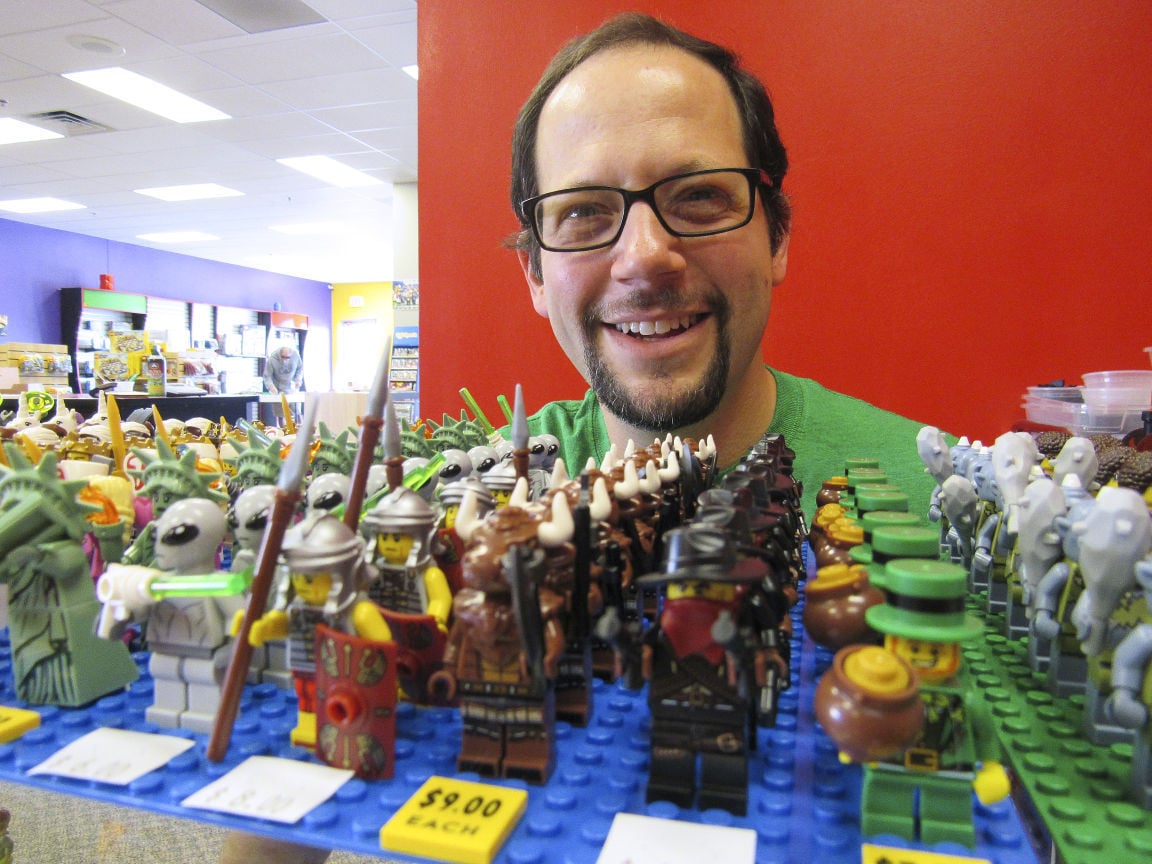 Dan Jacobsohn shows off part of his huge collection of Legos mini figurines that are for sale in his shop, Bricks & Minifigs, that opened Oct. 24 in Fitchburg. The store not only sells Legos items but also buys and trades Legos. 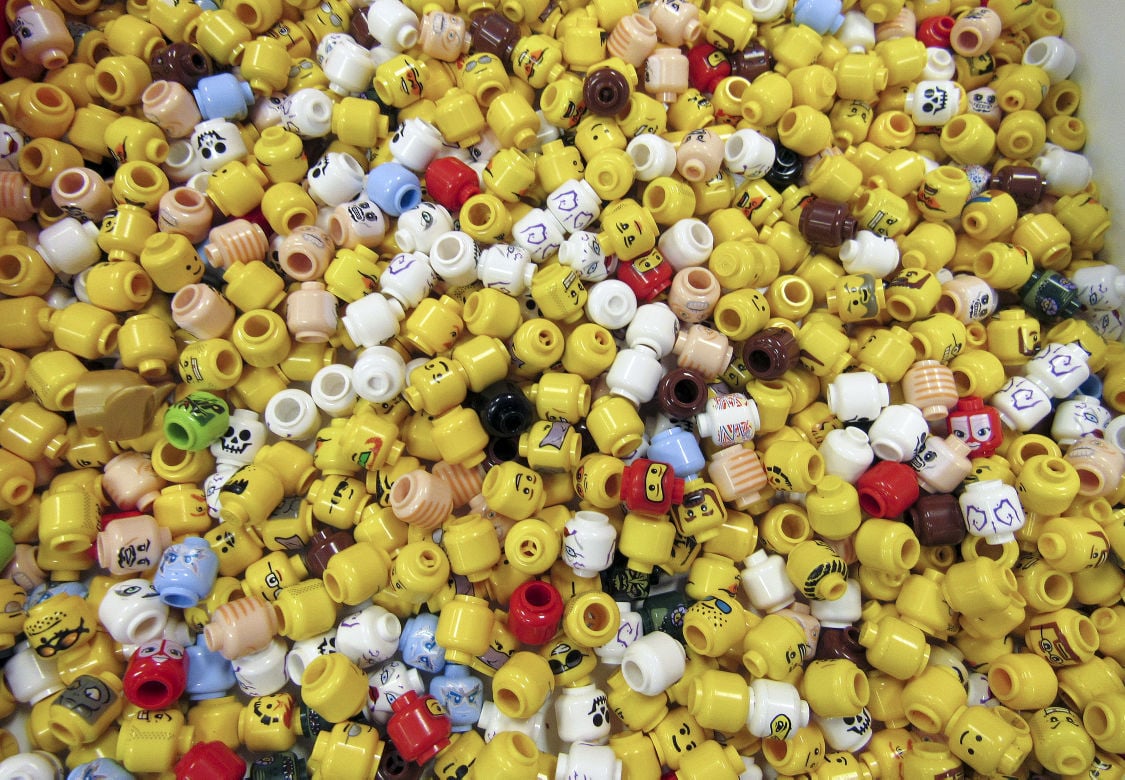 Thousands of heads of figurines fill a bin that allows customers to build their own Legos mini-figurines. 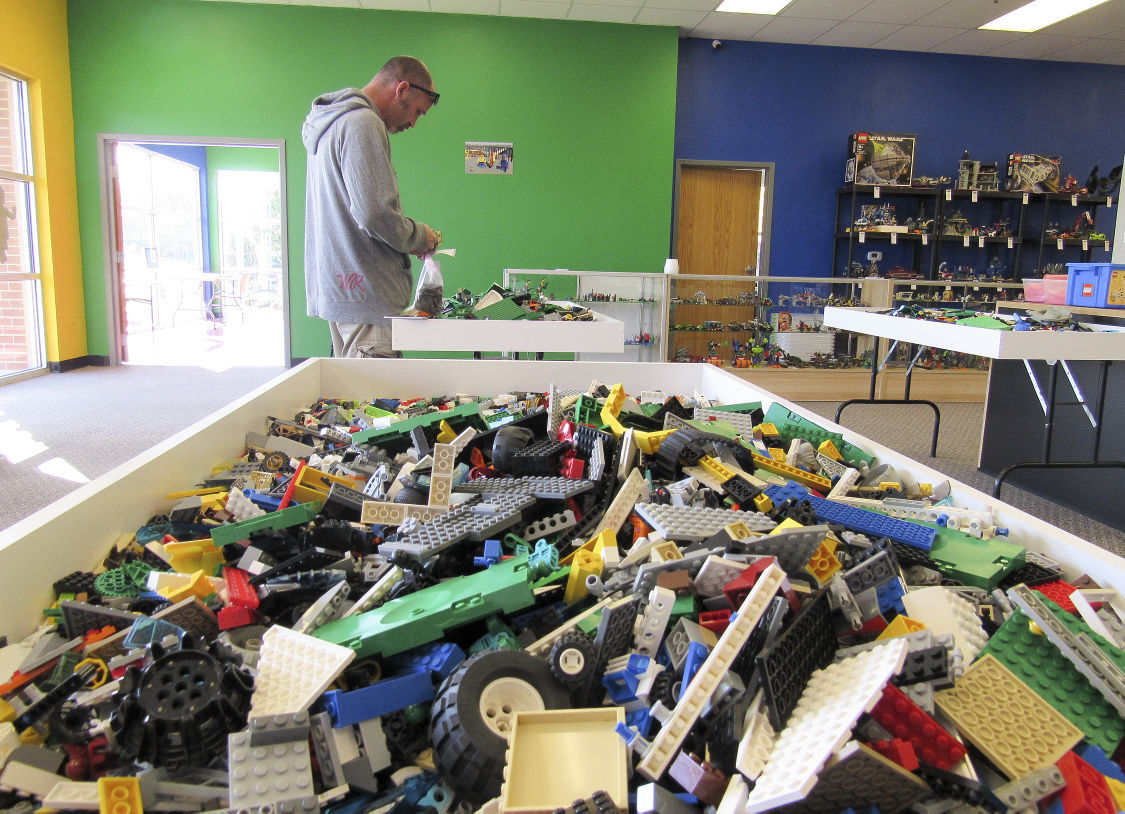 A customer at Bricks & Minifigs in Fitchburg fills a plastic bag with Lego parts from a bin filled with a variety of Legos. Bags, depending on size, cost $20 to $60. The shop also buys used Legos.

Dan Jacobsohn has always known about Legos but never really appreciated the toy until he began building structures and sets with his two sons, Max, 11, and Theo, 9.

Fast forward 18 months and the 42-year-old is no longer just playing with Legos.

Jacobsohn, who has no retail experience but years of management in information technology, has opened a store that is all about Legos but is not officially affiliated with the internationally known brand.

Instead, Jacobsohn is a franchisee of Bricks & Minifigs, the largest aftermarket Lego company in the country. His new career has him immersed with bins of thousands of pieces of Legos, rows of neatly organized figurines and Legos sets. His 3,800-square-foot store opened Oct. 24 at 2960 Cahill Main, next to Panera Bread.

The store has new inventory but specializes in buying and selling used and discontinued Lego products.

“I could have set up a website but it wouldn’t have been the same,” Jacobsohn said. “I’m meeting an unmet need and building community. I’m selling a product that doesn’t lose value.”

The store includes a 500-square-foot space for birthday parties, glass display cases filled with assembled Lego sets and hundreds of figurines that can sell from $5 to more than $40 each depending on condition, demand and design. The figurines include characters from Toy Story, Star Trek and DC and Marvel comics. A specialty line of figurines are affixed with cheeseheads and, of course, Star Wars figurines and sets are prolific throughout the building that for years had been home to a pharmacy.

Jacobsohn pays cash for used Legos, regardless if it’s a bag or bin filled with a mixture of pieces or a built set. A set that is not constructed won’t bring as high of a price because there is no way to guarantee it contains all of the pieces. Prices vary depending on condition, amount of pieces and the type.

Sellers can include parents cleaning out bedrooms and toy rooms, teens looking to cash in to buy a car or video games and collectors.

“We try to think we give a reasonable price,” Jacobsohn said. “Our model is based around buy, sell and trade. It’s what differentiates us from other toy stores.”

Jacobsohn has 20 years of experience in IT and for the last five years was the head of IT and the library for the School of Education at UW-Madison. He began thinking about the idea in 2014 and later discovered Bricks & Minifigs with a Google search.

The company was founded in Canby, Oregon, in 2009 and now has 16 locations around the country. Jacobsohn’s store is the first in Wisconsin.

According to the company’s website, the store “helps customers recapture fond memories from their childhood, gives people of any age a convenient place to buy, sell and trade all their Lego products, encourages people to use their imaginations, is a proven turn-key model with a protected territory, has a low startup cost and is easy and fun to own.”

Jacobsohn declined to give his investment in the project, only to say he has spent the last six months spending thousands of dollars buying Legos and figurines from online sellers. The Bricks & Minifigs website says initial investments can range from $99,100 to $271,200 depending on the size of the store and includes a $20,000 franchise fee with a protected territory and a five-day training program at the corporate headquarters.

For information, go to www.bricksandminifigs.com.

Kohl’s unveils new strategy: Could communities like Waunakee, Verona and Monroe be ripe for a Kohl’s department store?

The Menomonee Falls-based retailer announced last week a series of new initiatives in its “Greatness Agenda” that includes the launch of smaller stores designed for tight urban spaces or that could be used in smaller communities that in the past have been overlooked by the chain.

“We are in a strong position to explore new formats as an additional avenue for growth and diversification,” said Kevin Mansell, Kohl’s chairman, CEO and president, who unveiled the plan to industry leaders at the WWD Apparel & Retail CEO Summit in New York. “We have created a smaller, more nimble 35,000-square-foot Kohl’s prototype and will open five to 10 of these Kohl’s stores in underserved markets next year.”

Kohl’s, founded in 1962 in Brookfield, has 1,200 stores around the country including 40 locations in Wisconsin that employ more than 10,000 people. A Kohl’s store can be as large as 125,000 square feet, but the new model proposed for the company would be similar to a plan launched by Shopko. In 2012, the Ashwaubenon-based retailer began building 35,000-square-foot Shopko Hometown stores that are about 60,000 square feet smaller than traditional Shopko stores and can be found in 203 communities including Columbus and Reedsburg.

The company was founded in 1960 when it began selling framed backpacks but has evolved over the years to sell a wide range of men’s and women’s outdoor clothing. The new Madison store marks the brand’s sixth opening this year and 15th retail location in North America.

Fjällräven, according to the company’s website, is Swedish for Arctic Fox.

REI to close on Black Friday: There will be one less place to shop on Black Friday as REI has announced that it will go against the shopping grain of the crazed day and close on Nov. 27. The store will also be closed on Thanksgiving, a day when many national retailers are now starting their door-buster sales.

REI announced on its website last week that all 143 of its stores, including its Madison store near West Towne, would close but pay its employees to enjoy the outdoors.

The expo will feature a variety of vendors from different wedding-related industries including venues, travel planners, musical entertainment and caterers. In 2014, the expo had 54 vendors and 250 attendees.

“Marriage equality is expected to generate an estimated $34.3 million in spending for Wisconsin,” said Jason Rae, the chamber’s executive director. “After seeing the success of last year’s expo, we knew we needed to do it again.”

This story has been updated to reflect a correction. The original misspelled Menomonee Falls.

Madison company is named business of the year by LGBT Chamber

Hinckley Productions of Madison is among the winners announced

Condon Jewelers was one of the first tenants in the mall that opened in the early 1970s.

Halloween stores begin to pop up and Attic Angels to hold its annual sale.

Wisconsin Kenworth breaks ground on a dealership and service center.

BrickUniverse, a Lego fan convention, will be coming to Monona Terrace in July for two day, displaying more than 100 creations and featuring two Lego artists. In Wisconsin, adult fans have also found a connection to the Danish building blocks.

Dan Jacobsohn shows off part of his huge collection of Legos mini figurines that are for sale in his shop, Bricks & Minifigs, that opened Oct. 24 in Fitchburg. The store not only sells Legos items but also buys and trades Legos.

Thousands of heads of figurines fill a bin that allows customers to build their own Legos mini-figurines.

A customer at Bricks & Minifigs in Fitchburg fills a plastic bag with Lego parts from a bin filled with a variety of Legos. Bags, depending on size, cost $20 to $60. The shop also buys used Legos.