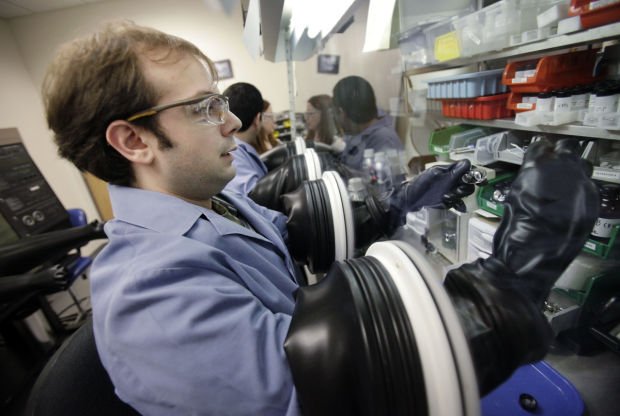 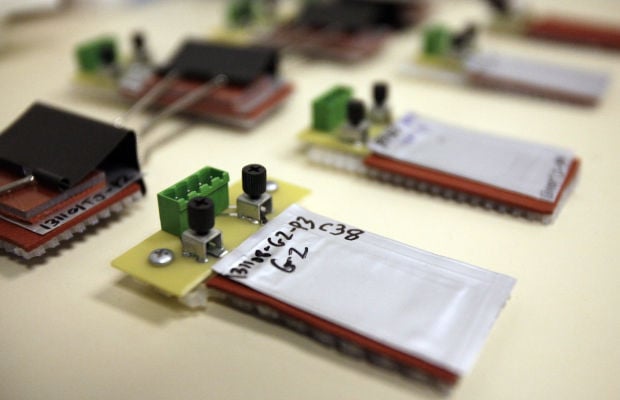 Pouch-style battery cells, like those used in cell phones or laptop computers, also are being made and tested at Silatronix. 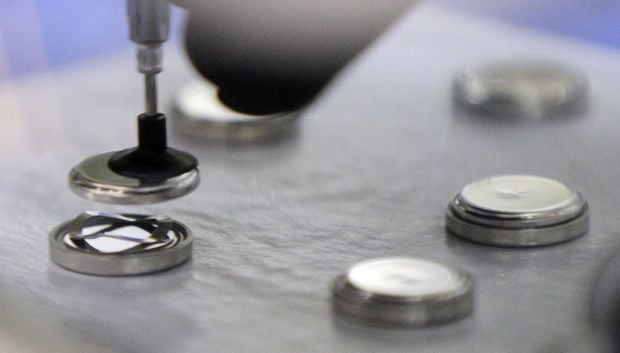 Silatronix lab technician Nicholas Holston drips the company's silicon-based electrolyte, a clear liquid, into a button-style battery and then tops it off. 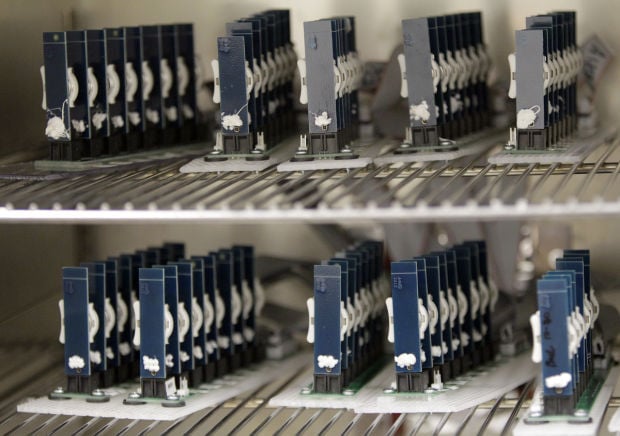 Racks of button-cell batteries sit in a temperature-controlled testing chamber at Silatronix. 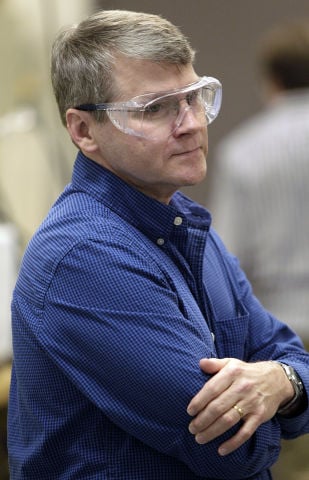 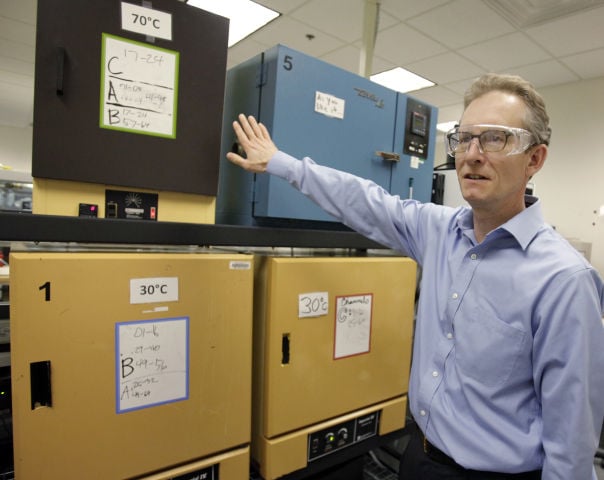 Silatronix CEO Mark Zager shows the company's temperature-controlled battery testing chambers. The batteries made at Silatronix are tested at a variety of temperatures, for varied lengths of time, to see how they will hold up in different situations. 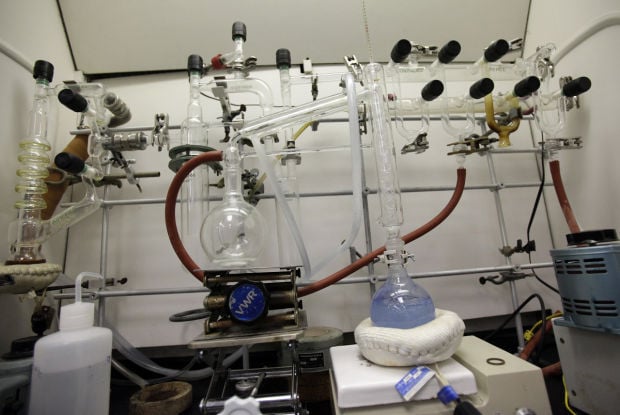 Chemical distilling equipment at Silatronix -- shown in this photo from 2014 -- produces a clear solution that will make batteries last longer, even in unusual climates, officials of the Madison company say.

A chance meeting in a UW-Madison chemistry building hallway led to the start of a company that could revolutionize the battery industry.

Silatronix, 3587 Anderson St., is working on an electrolyte that could make lightweight lithium ion batteries used in cellphones, power tools, electric cars and even Navy ships last longer and maintain their stability in high temperatures.

Silatronix (pronounced sigh-lah-TRON-iks), armed with $700,000 in new investment and a $2 million contract with the U.S. Navy, could have its solution in products on store shelves in 2016, said chief executive officer Mark Zager.

“Obviously, safety is a huge issue for this industry. And I don’t think a day goes by where we all don’t wish our consumer products had longer battery life,” said Scott Button, a Silatronix board member and a managing director of Venture Investors.

Birth of a battery company

Silatronix got its start when two University of Wisconsin professors, both considered experts in their fields, happened to run into each other one day in 2007.

“I was working on carbon-based nanomaterials where you take sheets of graphite and shove lithium ions back and forth between the sheets,” said Bob Hamers, 55, a UW-Madison chemistry professor and chief technology officer of Silatronix. “They had very interesting electrochemical properties. But I didn’t know how to take the next step.

“Then I saw Bob West; he was walking down the hallway. We passed each other and he said, ‘Do you know anything about electrochemicals?’ It was, literally, passing in the hallway. He said, ‘We have this interesting electrolyte.’ ”

West, 85, is a nationally known expert for his work with silicon. With a doctorate degree from Harvard, he began teaching chemistry at UW-Madison in 1956 and founded the UW’s Organosilicon Research Center more than a decade ago.

West and other partners had founded a company two years earlier, Polyron Materials, based on his silicon research, but it didn’t get off the ground.

West and Hamers took a different route, turning to Venture Investors, a Madison investment firm that focuses on funding early-stage companies. Venture Investors had recently launched its Venture Igniter program aimed at mentoring potential entrepreneurs with a lot of promise and helping them to create companies.

Winslow Sargent, who was a managing director of Venture Investors at the time, sensed good prospects for the technology and took “the two Bobs” under his wing.

“We looked at several investor groups. Venture Investors had a good history of working with the UW,” Hamers said. “There was a high level of trust there. We felt very comfortable with them.”

Through Venture Igniters, Sargent, now chief counsel for the Small Business Administration’s Office of Advocacy in Washington, D.C., helped Silatronix draw up a business plan and land a National Science Foundation grant and a smattering of seed money, triggering matching funds from Venture Investors. He served as interim CEO, bringing in Zager in January 2008, when the company began operations.

“Without the assistance of the Venture Igniters and Winslow Sargent, I don’t think the company would have ever been formed,” Button said.

The main components of those batteries are the anode, or negative electrode; cathode, or positive electrode; the filter that separates them; and the electrolyte, or fluid that carries the lithium ions between the anode and cathode, producing the charge.

There are many examples where silicon is added to make products more stable, such as adding it to caulk, Zager, 54, said. “We’re doing the same thing but with battery electrolytes,” he said.

In the company’s laboratories on the North Side — in the building that also houses Virent, which is developing biofuels and chemicals for use in petroleum-free plastics and fibers — Silatronix is producing more than 500 rechargeable coin cell batteries a month, about the size of a nickel, with different materials in each batch. The process is conducted in argon-filled glass cases in an “ultra-dry environment,” Zager said.

The batteries are tested at temperatures ranging from minus 40 degrees to 158 degrees Fahrenheit and for cycles ranging in length of time, some for weeks or months.

“We test what happens over many, many hundreds of cycles ... to simulate what will happen to a battery over a long period of time,” Zager said.

He said the experiments show the silicon solution results in fewer reactions. “You can abuse the cell and not have the same fires and smoke,” Zager said.

He said Silatronix is working with Saft, a global battery company based in France. “Saft is taking their products off their lines and filling them with our electrolytes,” Zager said. Saft, through its operations in Baltimore, supplies the U.S. military with batteries.

The $700,000 in investment that Silatronix closed in November is the first portion of what the company hopes will be a total $3 million funding round expected to be finalized by the end of March. Investors include Venture Investors; the Wisconsin Alumni Research Foundation (WARF); Venture Management; and the Pyle Group, whose chairman, Thomas Pyle, Jr., is a former CEO and co-owner of battery maker Rayovac Corp., now part of Spectrum Brands.

The $2 million from the Navy is an 18-month contract. It brings the total of grants and investment in Silatronix to $9 million.

Zager said the funds will pay the salaries of Silatronix’s 12 full-time researchers and four part-time employees through 2014 and let the company “scale up to the next level, probably in early 2015.”

The silicon-enhanced electrolyte was developed using patents licensed from WARF and Argonne National Laboratories in Illinois and has since been modified to create the company’s own technology.

Eventually, Zager said, the Silatronix electrolyte could be used in a wide range of batteries, including airplanes, ships at sea, electric cars, medical devices and future smart grid electricity storage.

For West — who still conducts his own research into silicon chemistry — being involved in a young company at age 85 is “great,” he said. “I like what we’re doing.

“We have several new compounds that look maybe even better than the ones being tested now.”

“There’s a lot of market potential for Silatronix,” he said.

“The battery business is a multibillion-dollar business and if our electrolyte can improve the safety and performance of those batteries, there’s clearly going to be value for Silatronix — a lot of value.”

Lancaster, Pennsylvania-based Tell is a privately held maker and distributor of commercial doors, locks and hardware with annual revenues of nearly $40 million.

BluDiagnostics is working on a fertility test for women based on hormone levels in their saliva.

Watch Now: Why do the vaccinated still fear COVID?

Watch Now: Why do the vaccinated still fear COVID?

Pouch-style battery cells, like those used in cell phones or laptop computers, also are being made and tested at Silatronix.

Silatronix lab technician Nicholas Holston drips the company's silicon-based electrolyte, a clear liquid, into a button-style battery and then tops it off.

Racks of button-cell batteries sit in a temperature-controlled testing chamber at Silatronix.

Silatronix CEO Mark Zager shows the company's temperature-controlled battery testing chambers. The batteries made at Silatronix are tested at a variety of temperatures, for varied lengths of time, to see how they will hold up in different situations.

Chemical distilling equipment at Silatronix -- shown in this photo from 2014 -- produces a clear solution that will make batteries last longer, even in unusual climates, officials of the Madison company say.