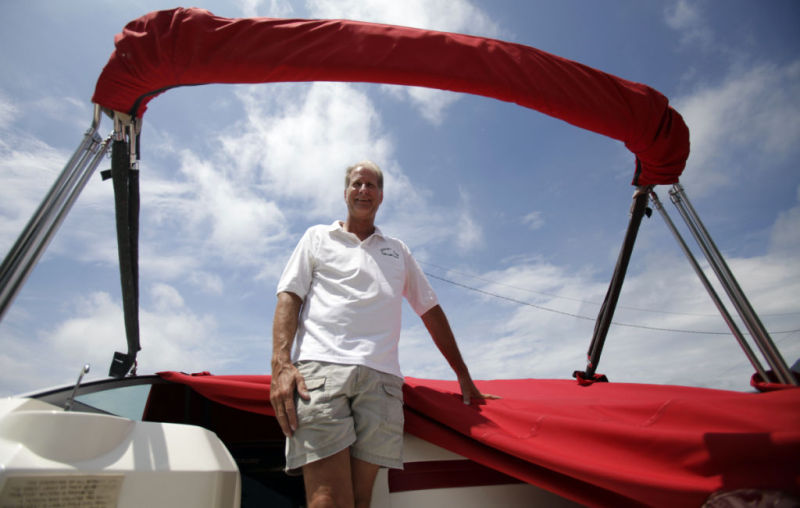 Steve Griffith of Marine Tops Unlimited found his calling in designing and producing custom boat covers like the ones he outfitted for this boat at the Four Lakes Yacht Club in Monona. 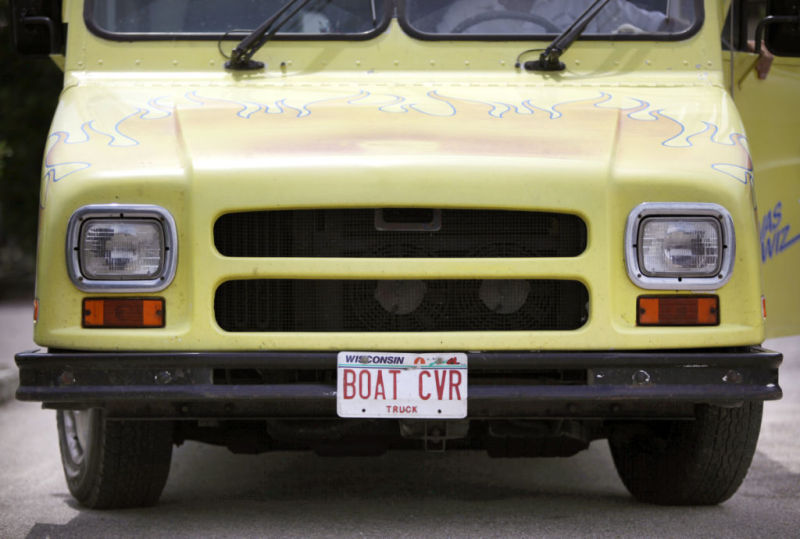 Steve Griffith has put 226,000 miles on his current service vehicle, the sixth he's had since starting Marine Tops Unlimited in Madison in 1990. He travels around to various marinas in the area to serve customers. 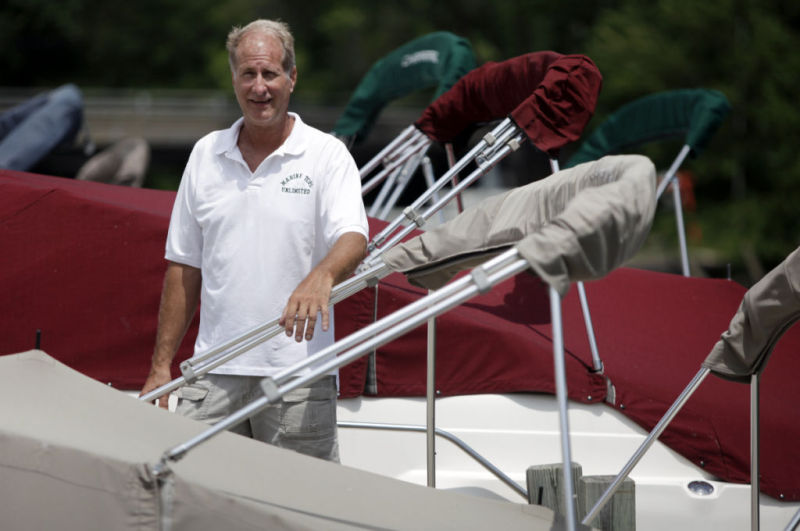 Steve Griffith of Marine Tops Unlimited poses between two boats he outfitted with custom covers at the Four Lakes Yacht Club in Monona. 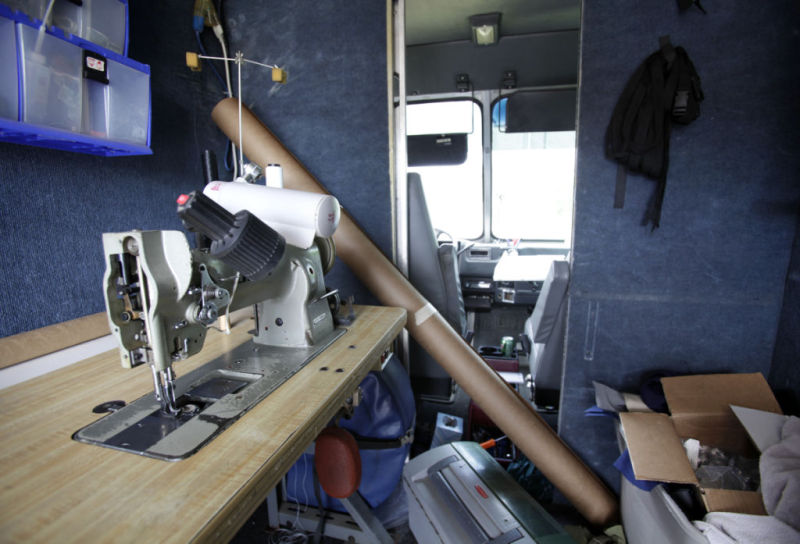 The mobile work truck of Marine Tops Unlimited is equipped with a sewing machine and other tools needed to service customers at marinas like the Four Lakes Yacht Club in Monona. 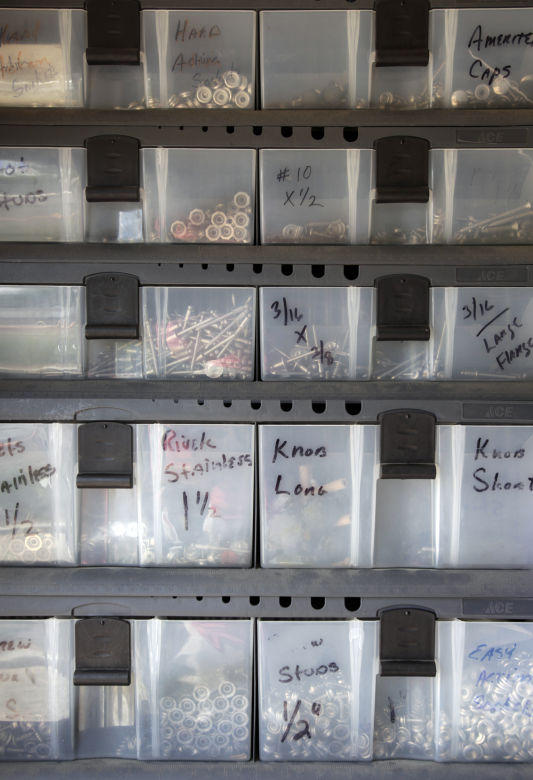 Steve Griffith's service vehicle is stocked with the hardware and parts he needs to service boat covers on site.

“But I guess if I can’t be a billionaire,” he said, “I might as well make boat covers for a living.”

And so he has, since 1990, when he opened Marine Tops Unlimited in Madison.

And while it might not have made him a billionaire, it has provided a comfortable living and satisfied his need to seek creative solutions and to work with his hands.

Still, he acknowledges that making custom boat covers and related boating equipment is a niche industry and not that high on most people’s lists of career options.

“It doesn’t seem like anyone is knocking at the door saying, ‘Hey, teach me how to do this,’ ” said Griffith, 57. “Like the tattoo parlor next door, there are people wanting to be the next best tattoo artist every day. You don’t see a lot of people saying, ‘Yeah, I want to learn how to build boat covers.’

It’s ﻿one he got into pretty much by accident and happenstance.

After graduating from Madison East High School in 1975, Griffith went to work in the parts department of a local auto retailer. He got involved with the Capital City Ski Team — now the Mad-City Ski team — and that brought him into contact with a tournament boat manufacturer in Fort Wayne, Indiana. He eventually went to work for that company, commuting from Madison for more than five years.

“I built boats for a living,” he said. “I did everything from taking orders to putting them in production to laying the fiberglass to putting the upholstery in, rigging the motors and all kinds of stuff.”

When that company was bought out, his job became primarily sales. Part of that job involved setting up shop at boat shows around the area, including one in Green Bay, where the neighboring booth each year was occupied by an Omro﻿ company, Marine Tops Unlimited.

One year the owner of Marine Tops, Carl Van Damme, asked Griffith if he’d be interested in trying to sell ﻿boat covers while he was going around selling other boating equipment.

“I told him, if anything, I could probably sell some boat covers in Madison for him,” Griffith said. “We figured out a pricing schedule and he started to show me how to take patterns and some of the basics.

“Eventually, the boat cover market in Madison became bigger for me than traveling around trying to sell boats and everything else, so I opened Marine Tops Madison.”

Marine Tops is one of three ﻿companies in the Madison area that make boat covers and related equipment. Gallagher Tent & Awning, which has been in operation since the 1880s, does boat covers along with tents and awnings. And a former Gallagher employee, Kris Stone, opened Kris’ Custom Sewing in 1990.

“I wasn’t sure there was that much work out there, but there are so many things to do, it’s unreal,” said Stone, who estimates that 60 percent to 80 percent of her work is boat-related.

“Interiors of boats are just crazy. Every boat is different and that’s the challenge. There’s plenty for all of us to do.”

The big challenge for the custom designer is to convince a customer that it’s worth it to pay extra for a boat cover designed specifically for their boat rather than picking up a cheaper, generic cover on the Internet or at a big box store.

“Boat covers aren’t cheap — at least custom ones aren’t,” said Griffith, whose business is almost entirely boating-related. “But we live in a big box world. You can go to a big box store and get one for $100. I get them in here all the time. They last a year or two, and then they’re falling apart.

“That’s where you have to educate people. You have to make them understand that it’s made out of better material, it’s designed and engineered specifically for your boat, not to fit 10 different kinds of boats. I look at myself as a craftsman or an artist, with some of the stuff we design and build.”

Henrikson, sales manager at Skipper Bud’s in Madison, observed his work on several boats and was so impressed that he hired Griffith to do some extensive work on his own boat, which doubles as his summer home.

“In my eyes, there isn’t anyone around that can match the quality of the work he does,” said Henrikson, who lives in Wisconsin Dells when not on his boat. “And I’m picky. When I let people do things on my boat, they need to be done right, and he definitely does that.”

Henrikson’s project involved redesigning the cockpit of the boat to increase the space, adding screens and privacy glass.

While some projects like that can be quite extensive and run up to $10,000 or $15,000, the bulk of Griffith’s work is more modest in scale all the way down to $200 canoe covers and even less expensive repair jobs.

Most of the boats he works on are from 32 feet on down. Many trailer-able boats are dropped off at his shop on East Washington Avenue, where he has two industrial sewing machines and a big, $9,000 double-needle machine capable of sewing four layers of Harley-Davidson saddlebag leather material.

“My mom taught me to do basic sewing when I was a kid, and they used to teach sewing in home ec at East High School,” he said. “And a lot I’ve learned from trial and error. A lot of the upholstery is so intricate that it gets to be a little challenging.”

A majority of jobs are done on location as Griffith regularly ventures out to the Madison area marinas, as well as outlying areas like Lodi, Merrimac and Wisconsin Dells. His service van has 226,000 miles on it and contains a sewing machine and all the equipment needed to perform most tasks.

Most of the sewing work, however, is done at the Omro shop, which has six employees.

Griffith makes a weekly run to Omro to deliver new patterns — drawn on plastic or paper much like a dress pattern — and picking up finished products.

And while he spends ﻿his time working on other people’s boats, Griffith likes to look at each project as if he were going to be living with it.

“I always look at a project and say, ‘What would I want it to be if it was my boat?’ ” he said. “I always ask a customer where their boat is going to live, whether it’s going to be on a trailer, in a garage, on a hoist or in the water.

“That all makes a difference in what kind of cover is going to serve them best. It’s what’s going to work best for you and what can I do to make your boat experience better.”

Is the Government Coming for a Piece of Your Social Security Checks?

You may be surprised at the answer.

If You Can't Answer This Question, You're Not Ready for Social Security

Claiming benefits at the wrong time could be disastrous for your retirement.

The plan could flood the market with additional shares and dilute the stock, making it more expensive for a buyer to acquire a controlling stake.

Planning to wait as long as possible to take benefits? You may want to rethink that.

Contributing to a retirement savings account may put you in the running for a Saver's Credit.

Don't end up with less income than you expect.

How to be a savvy shopper amid Cyber Monday hype

Besides recognizing FOMO, here are other ways to be a savvy shopper on Cyber Monday, which is the Monday after Thanksgiving. Also, check out more of the week's best money tips from experts.

Look for great discounts on Roomba, Dyson, Shark and other big vacuum brands.

Steve Griffith of Marine Tops Unlimited found his calling in designing and producing custom boat covers like the ones he outfitted for this boat at the Four Lakes Yacht Club in Monona.

Steve Griffith has put 226,000 miles on his current service vehicle, the sixth he's had since starting Marine Tops Unlimited in Madison in 1990. He travels around to various marinas in the area to serve customers.

Steve Griffith of Marine Tops Unlimited poses between two boats he outfitted with custom covers at the Four Lakes Yacht Club in Monona.

The mobile work truck of Marine Tops Unlimited is equipped with a sewing machine and other tools needed to service customers at marinas like the Four Lakes Yacht Club in Monona.

Steve Griffith's service vehicle is stocked with the hardware and parts he needs to service boat covers on site.