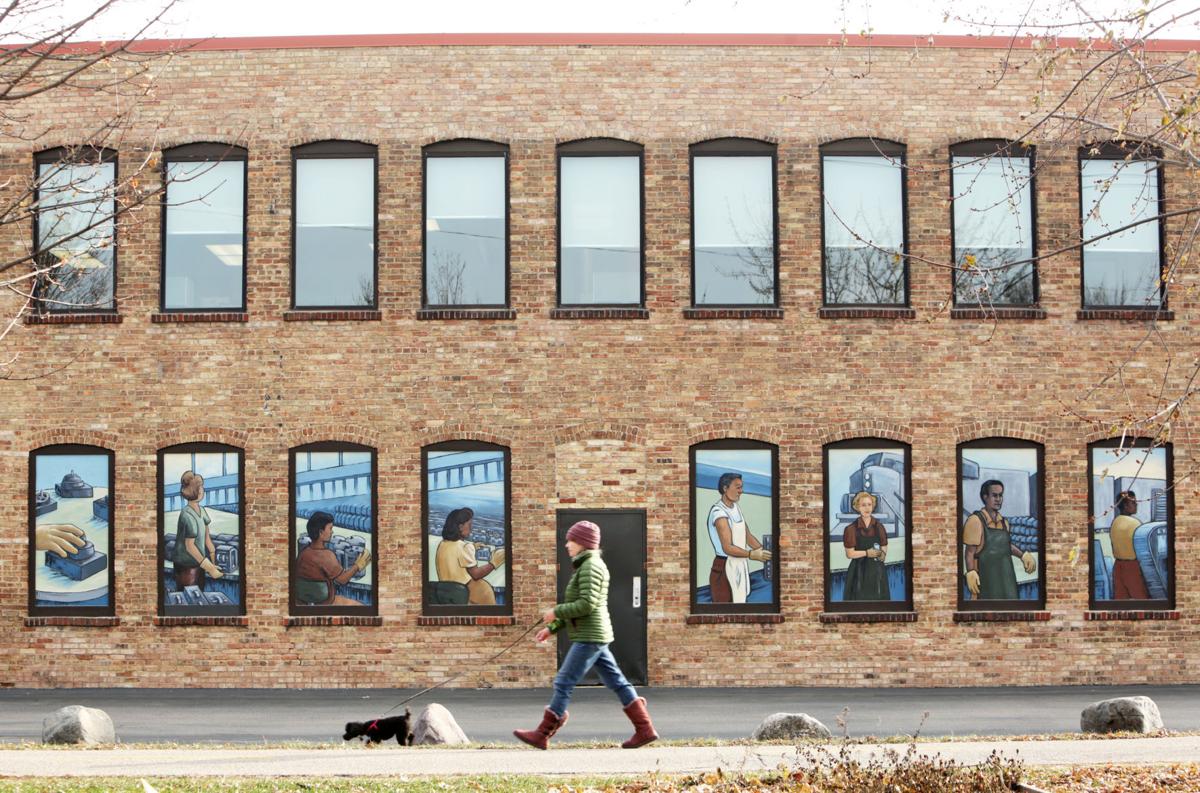 The state has settled a pollution lawsuit with Madison-Kipp Corp., allowing the company to postpone financial penalties for five years and cleanup of PCBs indefinitely. Above, Marja Barger, of Madison, walks her 5-year-old toy poodle rescue dog, Lucy, along the Capital City Trail past artwork displayed on the company's facade. 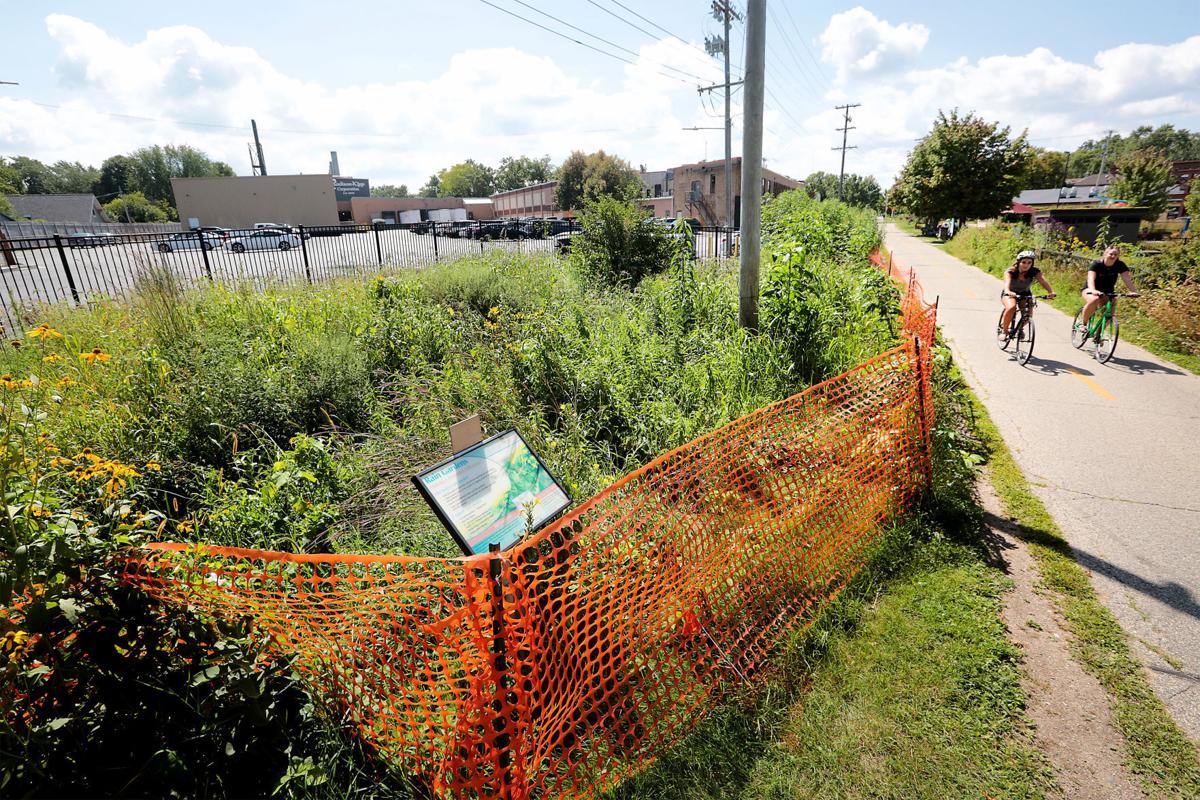 The state has settled its pollution lawsuit with Madison-Kipp for $350,000. PCBs in a city rain garden between Madison-Kipp’s parking lot and a bike path have been one part of a cleanup the company has been conducting. This file photo shows temporary fencing that was in place for a time.

Madison-Kipp Corp. has agreed to pay $350,000 in penalties by 2026 to settle a 2012 Wisconsin Department of Justice lawsuit over toxic soil and groundwater pollution.

The aluminum die-casting company is allowed to wait five years before it makes an initial payment of $25,000 under the settlement approved Monday by Dane County Circuit Judge Richard Niess.

The agreement allows the company to indefinitely postpone removal of very high concentrations of PCBs — polychlorinated biphenyls — beneath its plant on Waubesa Street. The company is required to establish a bond or other financial assurance of up to $1.65 million within five years for future cleanup of soil under the plant.

Nearly $119,000 of Madison-Kipp’s penalty is in the form of a fine. The rest consists of fees required under state law and cost reimbursements to the state Department of Natural Resources and the Justice Department.

The $119,000 Madison-Kipp fine resembles fines for less serious record-keeping violations under previous administrations, said Carl Sinderbrand, a Madison attorney who represents businesses and citizen groups in environmental lawsuits, and who worked in the Justice Department’s environmental unit from 1979 to 1990.

“Past administrations have always said we’re not going to accept good deeds or cost reimbursements in lieu of forfeitures,” Sinderbrand said.

Sinderbrand said the seriousness of Madison-Kipp’s violations is indicated by the spread of hazardous compounds beyond the plant site, and citizen lawsuits that forced the company to pay millions of dollars.

Schimel spokesman Johnny Koremenos said fines are set on a case-by-case basis. For Madison-Kipp, the Justice Department took into account the $7.2 million the company already paid out in private lawsuits, an estimated $8 million spent on cleanups, and another $2 million expected over the next decade, Koremenos said.

The five-year delay before Madison-Kipp begins paying penalties was designed to make sure the financial assurance for future cleanup costs is in place before the penalties are paid, and to recognize the company’s ongoing environmental costs, Koremenos said.

The settlement creates a five-year installment plan for the financial assurance — which could could come in a number of forms, such as a bond, insurance policy or letter of credit. There is to be $150,000 in available cleanup money by the end of this year, with the final $400,000 added by 2023.

Maria Powell, president of Madison Environmental Justice Organization, a citizen group, said the settlement was inadequate. Powell has pushed for stricter exposure standards to protect the public and a more extensive investigation with more groundwater monitoring and a fuller examination of potential avenues for the spread of toxins.

Since the state filed suit in 2012, the company has removed more than 50 tons of tainted soil and it is treating contaminated groundwater, but the toxins remain under the plant in significant quantities.

Two main contaminants on the site are PCE and PCBs. PCE is the term used for tetrachloroethylene, an industrial grease-cutter that is a likely human carcinogen and is believed to cause other serious health problems. PCBs are a family of heat-resistant industrial lubricants that probably cause cancer in humans and a variety of other serious health effects in animals.

Madison-Kipp president and CEO Tony Koblinski said he was pleased with the settlement.

“This agreement allows our company to continue to move forward on a cleanup plan that addresses issues that date back to previous generations who operated MKC legally,” Koblinski said. “We are glad to have this matter resolved.”

Oil laced with PCBs was dumped in the parking lot to keep dust down. The toxins also escaped through a trench that ran the length of the factory floor. PCE was in fumes that condensed in vents and escaped in liquid form.

The U.S. Environmental Protection Agency was involved in the investigation of PCBs found in very high concentrations as deep as 25 to 30 feet under the company’s Waubesa Street plant.

Madison-Kipp has argued that those contaminants could stay in place as long as the building remained as a cap to prevent rain water from filtering through soil and spreading the compounds.

The settlement postpones cleanup of the contamination for as long as Madison-Kipp or a successor company continue die-casting operations there unless groundwater monitoring shows the PCBs are spreading.

The company has removed PCB-contaminated soil around the plant and investigated drainage systems that have carried the compounds to the bike path just north of the plant’s parking lot. The DNR has approved leaving lower concentrations of the compound in the ground if they are covered with clean soil.

In 2013, the company paid $7.2 million to settle lawsuits brought by neighbors after PCE spread from the plant and released vapors that threatened adjacent homes.

Madison-Kipp removed PCE-tainted soil from the yards of homes around the plant. It has removed PCBs from under the parking lot, along the adjacent bike path and in a nearby rain garden. In efforts to halt the underground PCE plume, Madison-Kipp has been pumping out groundwater, treating it and depositing 65,000 gallons a day into Starkweather Creek.

The Madison Water Utility has budgeted about $100,000 for a sentinel well to provide an early warning if the plume moves closer to a drinking water well at Olbrich Park.

The company’s air emissions have also drawn attention. Neighbors recently began planning to install air monitors around the plant to measure fine-particle air pollution that is associated with serious lung and heart ailments.

The company expects to find a solution soon, but critics say government regulators have failed to properly investigate the troubled industrial site.

The change increases costs, but the company says it's addressing neighbor concerns.

The company argued that extreme levels under the plant floor wouldn't seep out, but rain garden detections date back to 2012.

Preliminary results from a new study indicate part of the PCE plume on Madison's East Side may be stabilizing, but utility wants to be sure.

The Madison Water Utility will spend $100,000 to monitor the deep aquifer near Well 8 for probable carcinogen from Madison-Kipp.

At issue is whether Madison-Kipp's smokestacks are emitting fine particulate matter at levels known to pose serious health hazards.

The state has settled a pollution lawsuit with Madison-Kipp Corp., allowing the company to postpone financial penalties for five years and cleanup of PCBs indefinitely. Above, Marja Barger, of Madison, walks her 5-year-old toy poodle rescue dog, Lucy, along the Capital City Trail past artwork displayed on the company's facade.

The state has settled its pollution lawsuit with Madison-Kipp for $350,000. PCBs in a city rain garden between Madison-Kipp’s parking lot and a bike path have been one part of a cleanup the company has been conducting. This file photo shows temporary fencing that was in place for a time.