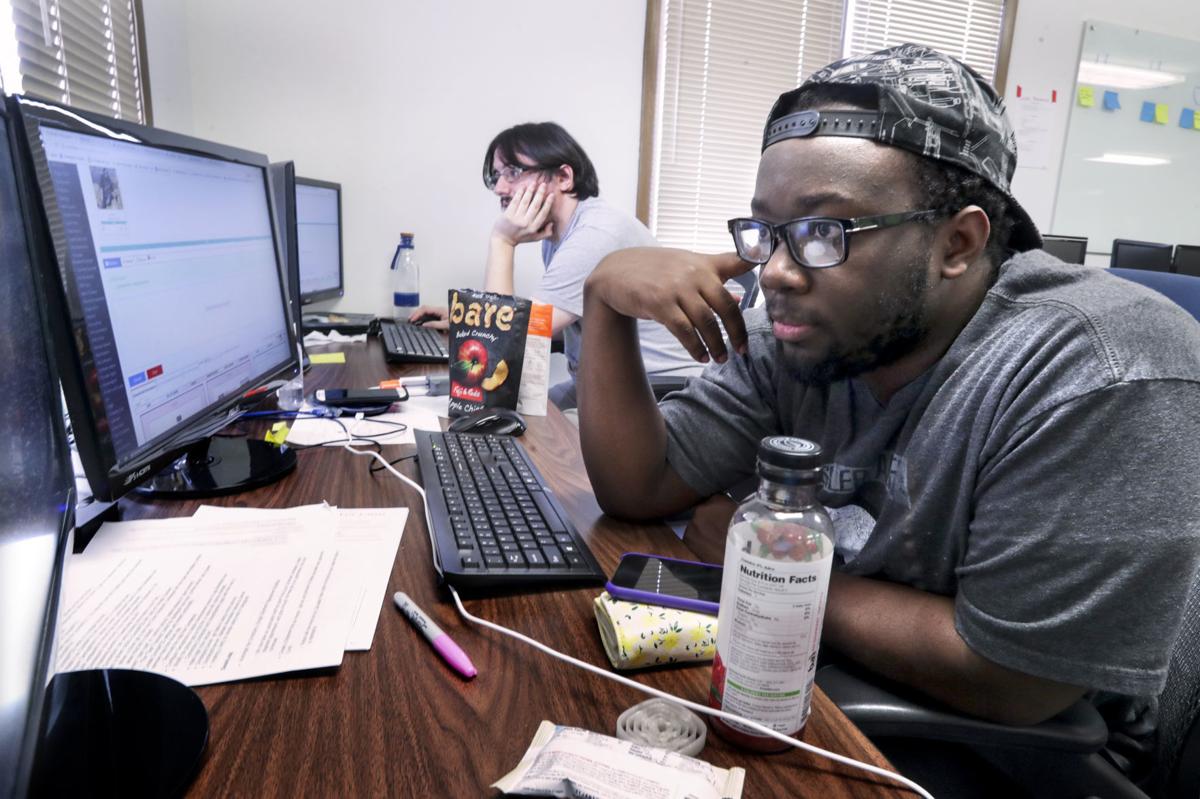 Eric Townsend, left, and Daniel Menard work on programming as a team at SwanLeap, a shipping logistics business founded in 2013. The Madison company, at 6325 Odana Road, is No. 1 on the Inc. 5000 list of the fastest growing companies in the U.S. 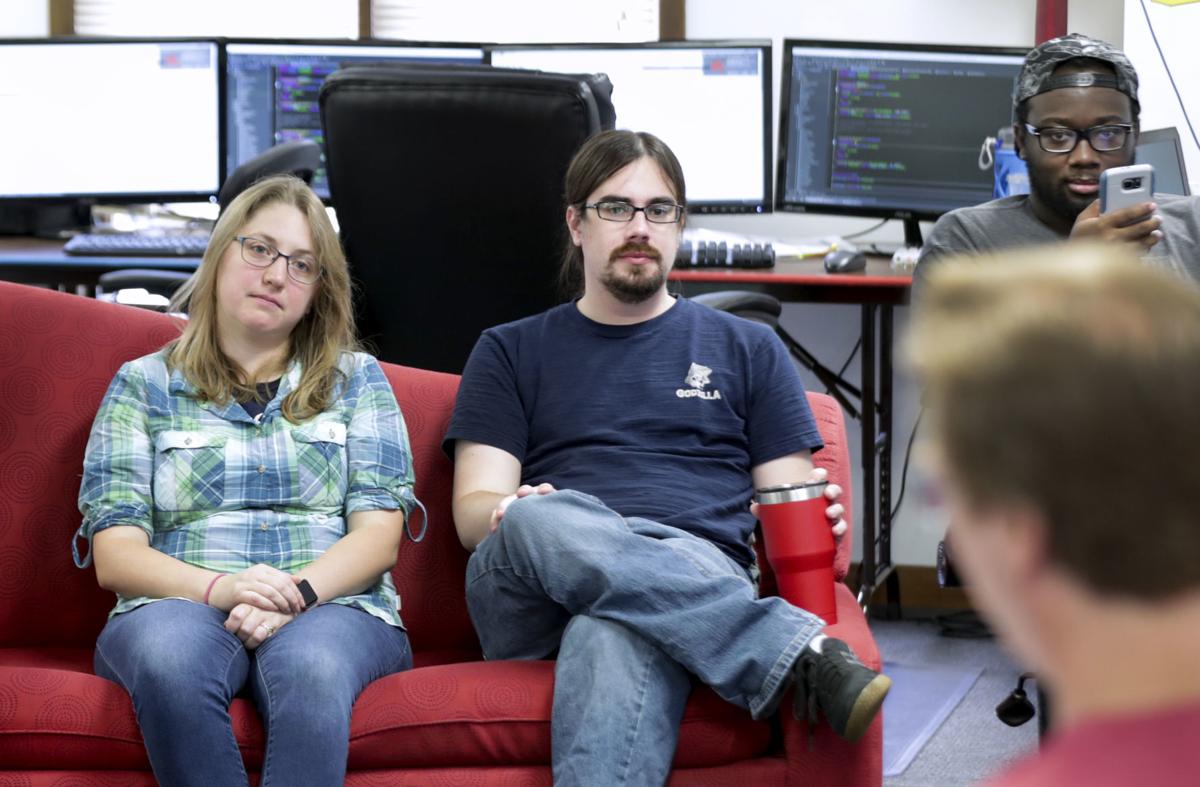 Amber Barreras, left, director of development Dan Rothe, and Daniel Menard listen during a daily staff meeting at SwanLeap. The Madison company -- No. 1 on the 2018 Inc. 5000 list, says it has shaken up the shipping logistics market by using artificial intelligence to find the most economical way to transport products from factories. 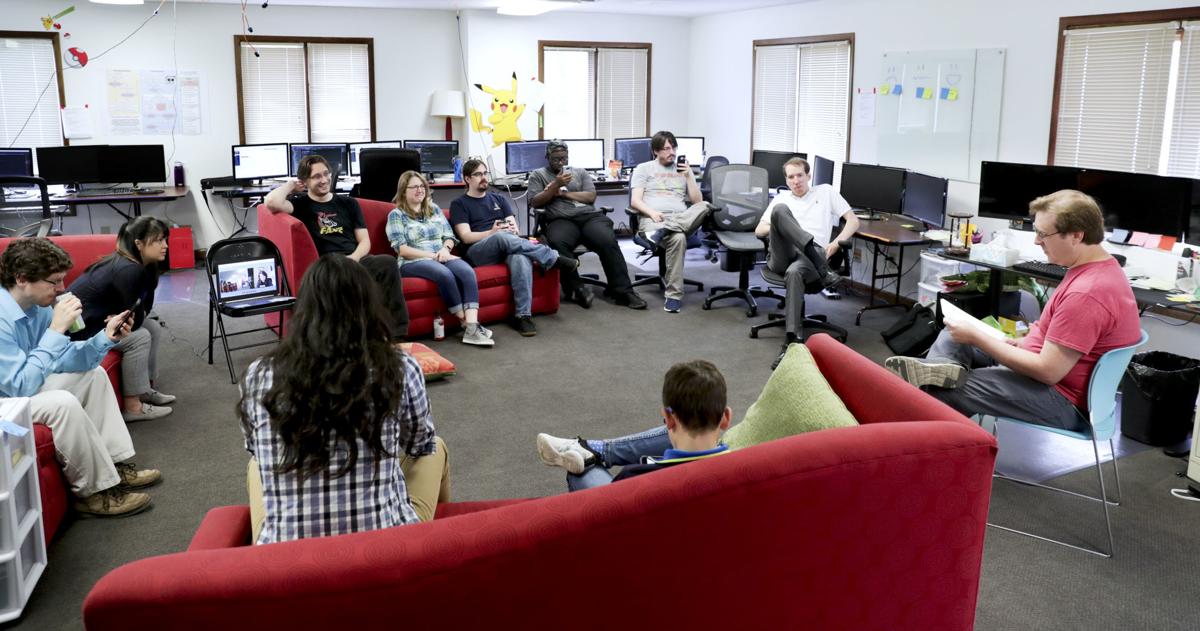 Two Wisconsin businesses are among the 10 fastest growing companies throughout the U.S., the latest Inc. 5000 list shows.

SwanLeap, a Madison company that revamps the way manufacturers ship their products, scored a No. 1 ranking, and Diamond Assets, a Milton business that buys used Apple computers and resells them, is No. 7, according to the Inc. 5000 list released Wednesday.

SwanLeap reported a whopping 75,660.8 percent leap in sales from 2014 to 2017. It is the first Wisconsin company to reach the top of the heap since 1986, when ABC Supply, the huge Beloit roofing supply company founded by Ken and Diane Hendricks, led the pack.

“I can’t believe it, still,” said SwanLeap co-founder and CEO Brad Hollister, 40, a Lake Geneva native with a marketing degree from UW-La Crosse who lives in Stoughton with his wife and three children.

“I knew our numbers would be good but when you look at other companies ... it’s hard to imagine a company starting in a basement to be in the same breath as some of those companies,” Hollister said.

Founded in 2013, SwanLeap — whose investors include former Wisconsin governor Tommy Thompson — helps determine the fastest, most economical way, in real time, for manufacturers to get their products to retailers. The company’s technology analyzes a host of factors such as which trucks are available, how big the order is, fuel costs, traffic and weather conditions.

“We utilize artificial intelligence (AI) to make the best business decisions based on the market conditions at that time,” Hollister said. “The result is a 27 percent reduction in shipping costs.”

It’s a story that could be considered even more remarkable because it evolved from the failure of Hollister’s previous company, Freight Access.

Freight Access matched up empty trucks with manufacturers seeking shippers. Hollister, who had sold trucking services and handled shipping logistics, figured he could help both factories and transportation companies become more efficient. Manufacturers could type in their needs and get bids from trucking companies. But they didn’t want to spend the time on the process, Hollister said.

“What we realized is that that is so far from the way things are dealt with” because of long-term contracts ... and habit. “They just know they always call (a particular) company when they have a shipment,” Hollister said.

It was 2012, and the business was a bust. “I had sunk my life savings and two years of my life into this to realize that no one wants it,” said Hollister. “I have no money, no job, and kids.”

So he tweaked the business concept. “We figured out a way to automate (the process),” Hollister said.

Rogan’s Shoes was his first customer for the new system. The Racine company needed technology that could handle orders and balance inventory among its more than three dozen stores and warehouses around the Midwest.

“We would use AI to determine the delivery mode. A worker at the store would get a pop-up message. We automatically controlled the pick-up and we sent tracking (information) to the customer,” Hollister said.

“We think we could be (at) $400 million this year. We’re expanding into new markets, doing a lot of business internationally now. And we are able to have partners that can go in and install our software for us,” Hollister said.

“The global transportation industry has much bigger potential,” he said.

SwanLeap, which ranked 55th on last year’s Inc. 5000 list, has more than 50 employees in Madison and 25 at offices in Mexico and the Philippines. Hollister said employment could triple in a year.

Diamond Assets says its mission is to help schools, businesses and organizations update their technology more regularly and inexpensively.

Founded in 2014, the former Janesville company, which moved in June to a new warehouse and office building in Milton, buys Apple computers, iPads and iPhones from schools, organizations and businesses and then cleans the equipment, wipes its data, and sells it to wholesalers who peddle the used technology to consumers.

“If they trade in at the right time, they’re able to maximize value and bring down the cost” of newer equipment, Diamond Assets vice president Charles Duarte said. He said Apple products “still hold their value better than anything else out there on the market.”

SwanLeap and Diamond Assets are among 43 Wisconsin companies on the 2018 Inc. 5000 list, compared with 54 last year. Eleven are in the Madison area and three others are in the region:

The Inc. 5000 list is compiled based on statistics reported by companies that choose to participate, showing their three-year revenue gain.

More than a dozen local companies, most involving software products and services, represent the area on the list of the nation's fastest growing companies.

The popular list, released Wednesday, shows off U.S. companies with the fastest growing revenue over the past three years.

Eric Townsend, left, and Daniel Menard work on programming as a team at SwanLeap, a shipping logistics business founded in 2013. The Madison company, at 6325 Odana Road, is No. 1 on the Inc. 5000 list of the fastest growing companies in the U.S.

Amber Barreras, left, director of development Dan Rothe, and Daniel Menard listen during a daily staff meeting at SwanLeap. The Madison company -- No. 1 on the 2018 Inc. 5000 list, says it has shaken up the shipping logistics market by using artificial intelligence to find the most economical way to transport products from factories. 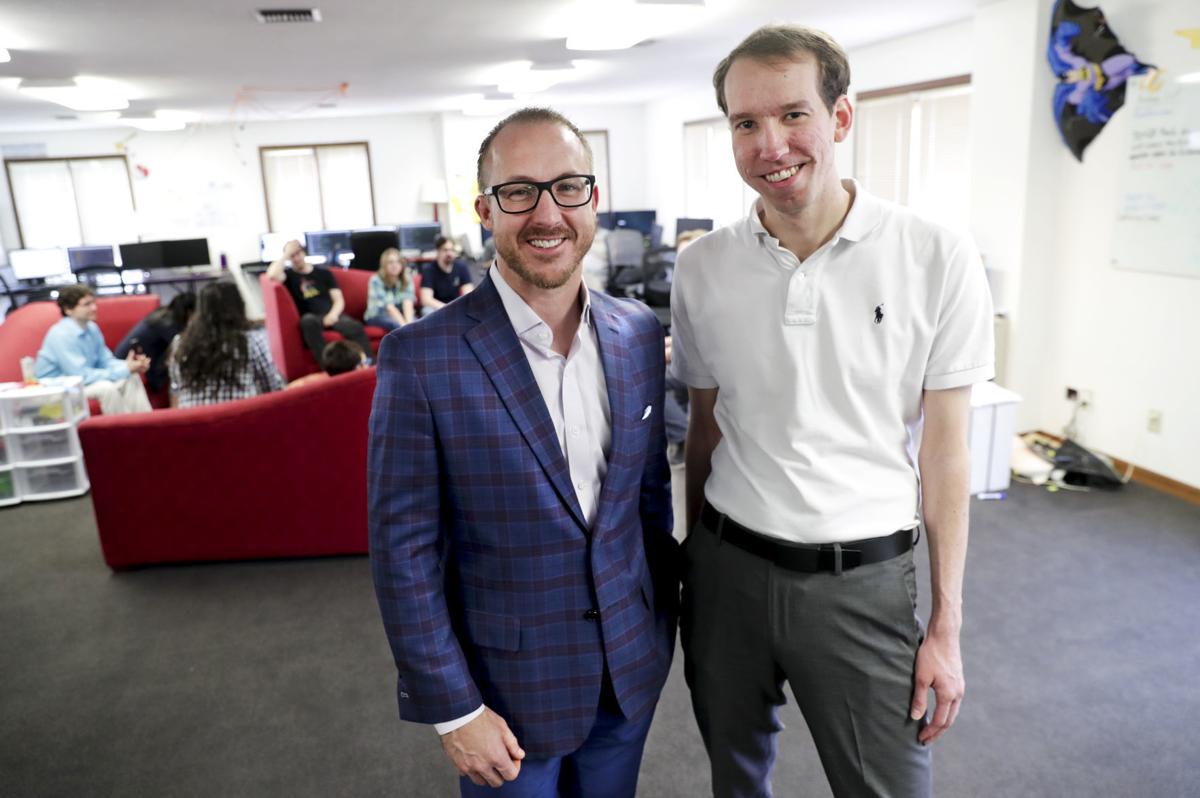