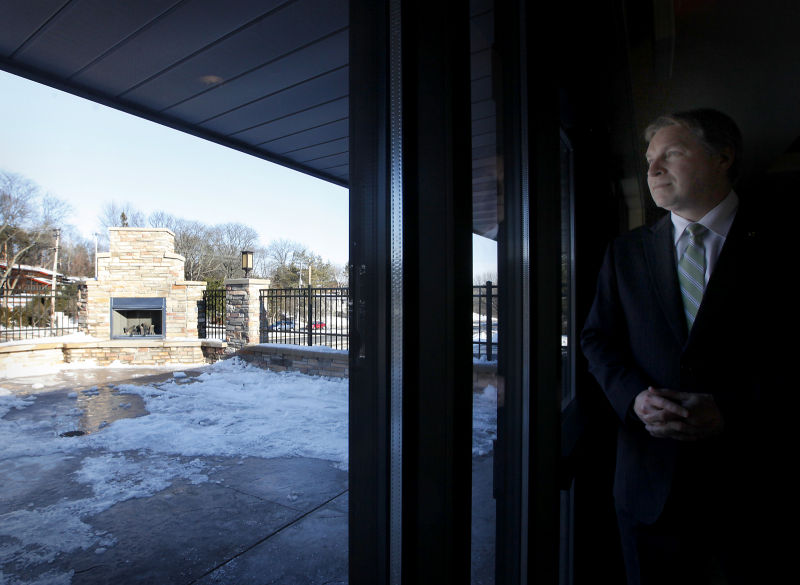 An outdoor terrace — including a fireplace, built-in seating along the perimeter walls and a bar — is one of the features at the renovated Cress Center in Middleton. Vice president and treasurer Dan Fose believes the amenities will attract gatherings for civic meetings and family celebrations as well as funerals. 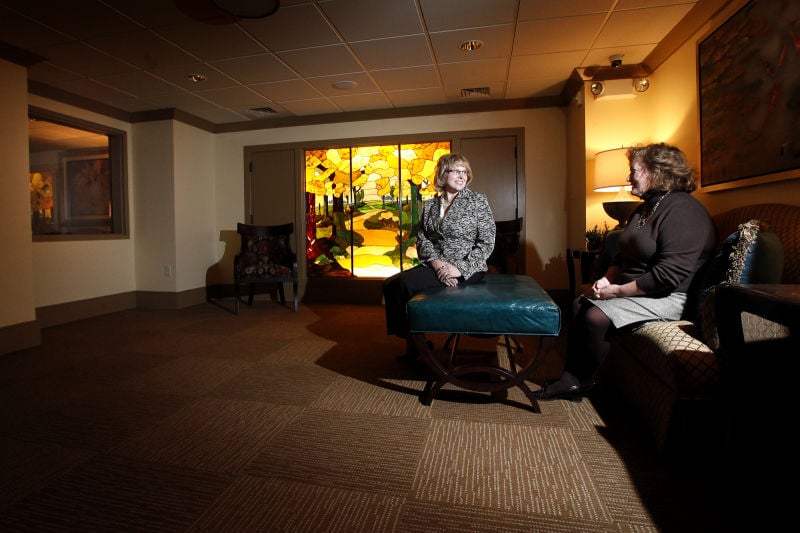 Perhaps the most unique feature of the renovated Cress Center in Middleton is a gathering place next to the crematory where families and friends can pray, meditate, light candles and say their final goodbyes before a loved one is cremated. Cress Funeral and Cremation Service family members Sherry Cress, left, and Mary Cress Fose sit on furniture that faces a window with a view of the crematory. 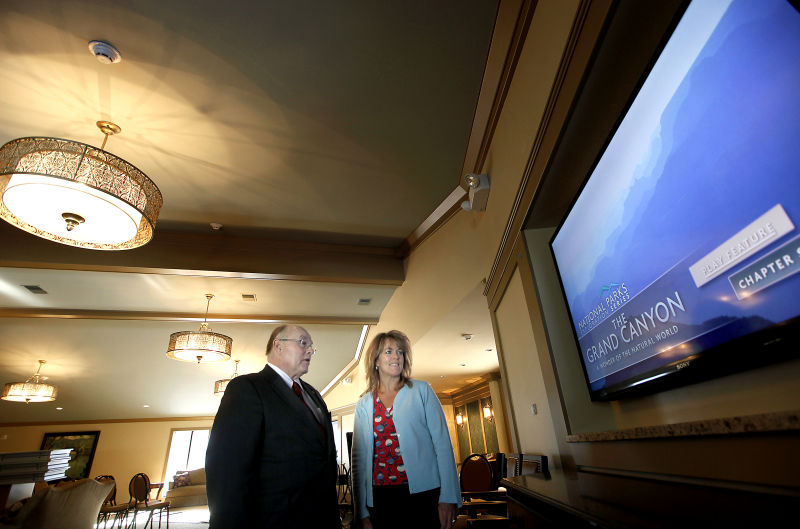 Even though Diane Dropsho worked as a hospice nurse for five years, the subject of cremation was too grim for her to discuss with anyone prior to the sudden death of her husband, Frank, from a stroke two years ago.

It’s a different story today. Dropsho, who had just celebrated her 50th wedding anniversary with Frank before he died, has strong memories of the hour she spent with his body just before it was cremated at Cress Funeral and Cremation Service’s Speedway Road location.

She remembers seeing him laying on a gurney covered with a gold-and-tan sheet as she said her final goodbye. “Just his head showed,” Dropsho said. “He looked like a king laying in state.”

When Dropsho heard that Cress recently built a bigger family gathering room outside its crematory in Middleton, Diane gave it a big thumbs-up. “I know families will appreciate it,” she said.

It’s an example of what funeral homes are creating to meet the changing needs of families that are looking beyond churches as an option for honoring their departed loved ones.

The Cress Center is the new name for the 14,000-square-foot Middleton facility, 6021 University Ave., which is reopening later this month.

It has six big-screen TVs for video tributes, a high-tech sound system, Wi-Fi, a great room that can accommodate a three-string orchestra or small band for a gathering of about 175 people, an outside fireplace and bar, and a kitchen for catering.

It also has a downstairs area that offers sects and other religious and national groups the room and privacy to prepare rituals to honor their dead.

Cress is part of a changing trend in the funeral industry. As a Gallup poll showed that Americans’ confidence in organized religion continued to dip in 2012, funeral homes are trying to capitalize by offering services that run the gamut from traditional to downright offbeat.

Music can be piped in from an iPhone instead of an organ. Spiritual and humanist funerals can replace religious ones. And services and gatherings at the time of cremation can replace the gravesite service. That is significant, too, because the number of cremations in Madison is reaching 60 percent, according to some funeral directors.

“We want to stay relevant and to do that we need to listen to people’s needs,” said Carey Cress Fose, vice president at Cress. “We’re part of the change culturally and socially. We want to incorporate it into our lives. We look at this as a positive.”

The inside of the Cress Center is bright and airy and painted in warm colors so it conveys a multifunctional appeal that the family hopes will also make it a popular draw for community and neighborhood events. President Bill Cress said it fits a special niche between the convention-sized accommodations of a hotel and the smaller rooms at a restaurant.

Other funeral homes in the area have tried to create niches, too.

Gunderson Funeral Home turned a former restaurant into a multi-functional facility in Oregon and built a new facility in Fitchburg.

“It gives families an opportunity to get together without that church feel,” said Dan Plitzuweit, funeral director at Gunderson’s Middleton location. “It’s almost the opposite of weddings where people still look for the old-fashioned church for pictures and things.”

Roman Ryan, owner of Ryan Funeral Homes in Madison, said the majority of funerals in Madison still are held in churches. And he said non-religious services at his funeral homes are rare.

“Maybe one in the last year,” he said.

Ryan feels the personalization of the funeral services that includes video tributes and photos on big-screen TVs and the need to simplify the visitations, funerals and meals into a one-day event at one site account for some of the biggest changes in the funeral business.

But the biggest change involves cremation, he said.

“Back in 1989, 5 percent of the people who died and went through our funeral home were cremated. Now it’s around 50,” he said.

So while Cress made substantial improvements to the upper level of its Middleton funeral home, its state-of-the-art changes on the lower level may pay the greatest dividends. It’s called the CARE Center for cremation, artistic work, restorative work and embalming.

Each room is a draw for the work they do and for different groups of people who can use them, too.

The cremation area, which Cress Fose says is unique in the Madison area, includes a room with a stained-glass window and comfortable furniture that can accommodate an entire family. It is next to the room with the crematory. The crematory room also has seating.

Cress Fose said most families who have loved ones cremated at Cress’ other sites stay with the body for a point beyond the end of the memorial service and before the cremation. Some stay all the way up to the start of the cremation and some sit in the crematory room for the duration.

She said she saw a young girl place her teddy bear inside the box holding her grandparent’s body as it was being wheeled toward the crematory. She has seen families read prayers or poems and light candles just before the cremation. Others stay for the duration, including those whose rituals call for them to remove the ashes.

“That’s when we realized how important it is to have something like this room,” Cress Fose said. “When you witness all of that, you feel passionate about it and you want to tell their stories.”

An outdoor terrace — including a fireplace, built-in seating along the perimeter walls and a bar — is one of the features at the renovated Cress Center in Middleton. Vice president and treasurer Dan Fose believes the amenities will attract gatherings for civic meetings and family celebrations as well as funerals.

Perhaps the most unique feature of the renovated Cress Center in Middleton is a gathering place next to the crematory where families and friends can pray, meditate, light candles and say their final goodbyes before a loved one is cremated. Cress Funeral and Cremation Service family members Sherry Cress, left, and Mary Cress Fose sit on furniture that faces a window with a view of the crematory.