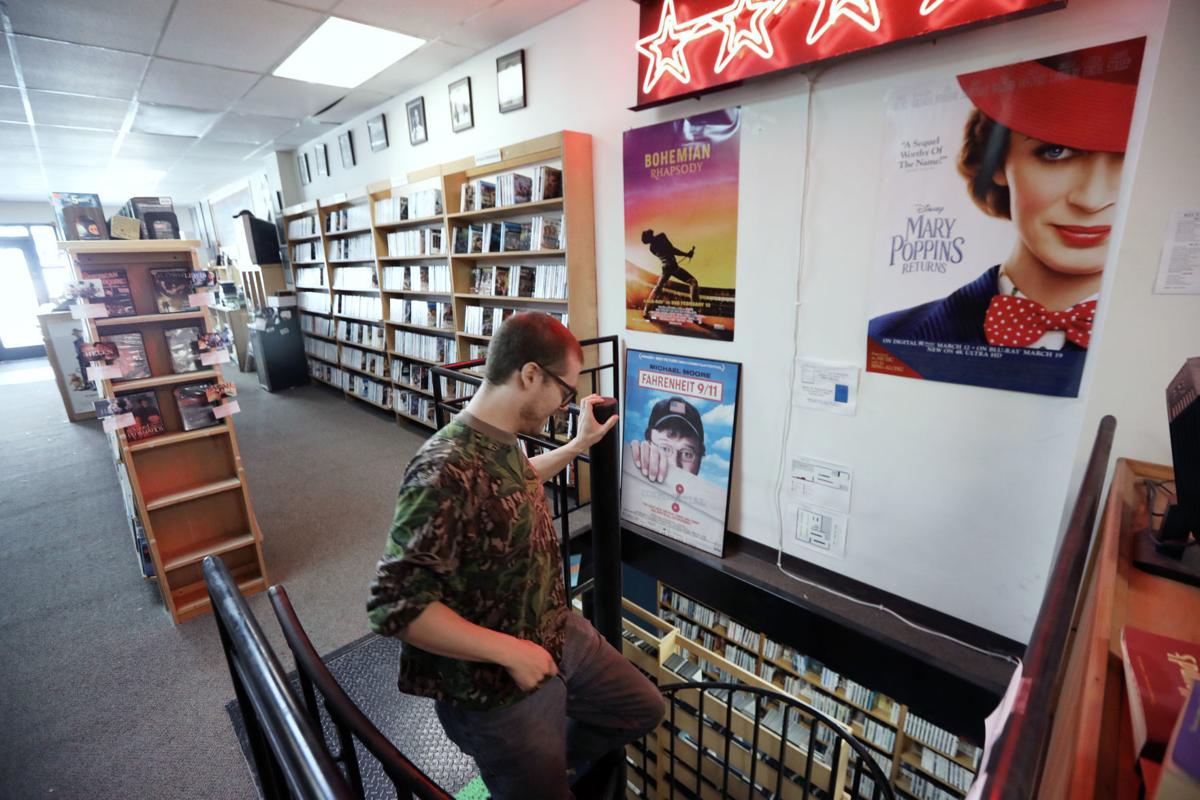 Lewis Peterson, co-owner of Four Star Video Cooperative, is trying to keep the doors open on the video store that was founded in 1985 on North Henry Street. The store, the last independently owned video store in Madison, is now at the corner of North Broom and State streets. 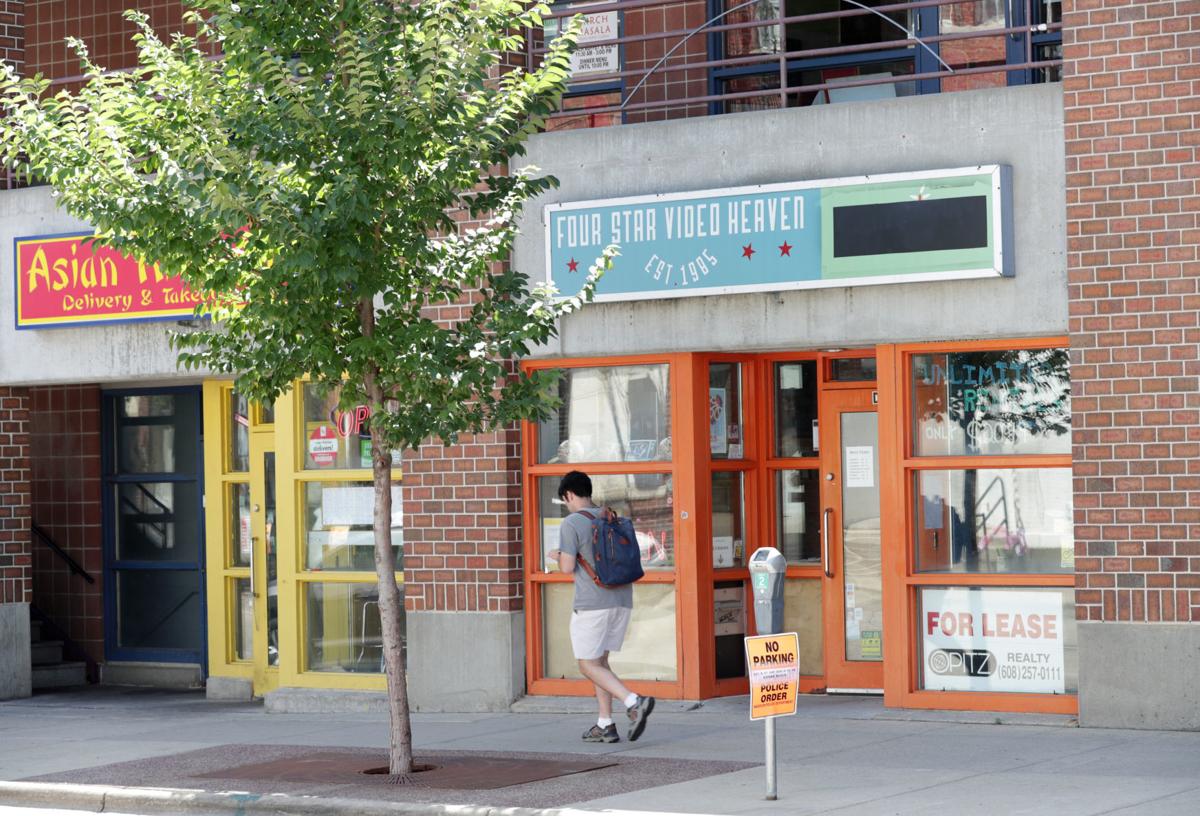 Four Star Video Cooperative has been at North Broom and State streets for the past seven years.

Four Star Video Cooperative is $10,000 in debt, barely makes enough money to maintain its operations and most of its ownership group is moving on to other things.

But passion, along with volunteers, crowdfunding and a less expensive space, could keep this depot of DVDs, Blu-ray discs and, yes, VHS tapes, alive in the heart of a tech-savvy city.

The odds — in a world of Netflix, Hulu, Amazon, Spectrum’s On Demand and other streaming services — are not good. But Lewis Peterson and Robert Doerr are all in on trying to maintain the store’s relevancy, its more than 20,000 titles and a loyal base of customers. (About 250 or so — about 75% of its customer base — pay between $21 and $31 a month to watch an unlimited number of movies.)

“It is kind of a crazy prospect going into the 2020s,” said Peterson, one of the store’s owners, as he stood behind its cluttered counter at North Broom and State streets. “We don’t have illusions about being the only source of movies, but I do think there is still a place for something like us.”

The business has launched a crowdfunding campaign through IndieGoGo in an attempt to raise $20,000. The funds, Peterson said, would be used to pay off debt, invest in new equipment and help the store move to a new location somewhere Downtown. That’s likely to be off of State Street, where the rent would be less than the existing $2,800-per-month lease.

In addition, Peterson hopes the new iteration of the store, once it moves to a new location by the end of November, will include more volunteers for staffing, more investors, sponsoring more movie-related events and possibly reorganizing as a nonprofit. But as of Sunday evening, the crowdfunding campaign, which has been extended to Sept. 28, had raised just $1,850 from 32 backers.

“It’s kind of daunting,” said Peterson, 30, a Minneapolis native who began working at the store in 2013. “We want to stay Downtown. We don’t want to move too far away and alienate part of our customer base.”

Four Star was once one of many players in the video store landscape of Madison.

Its competition over the years included Video Station, Video Max, Hollywood Video, Late Night Video, Bongo Video and Blockbuster, stores that have all closed. Family Video, a national retail chain, closed its 7,000-square-foot Middleton store in June 2018, while its store at Maple Grove and McKee roads was downsized in 2018 to make way for a pizza restaurant. Redbox video rental kiosks are scattered throughout the city, and the Madison Public Library also offers videos that can be checked out like a book.

But while the video store industry has largely vanished from Madison’s retail landscape, Four Star has continued to hang on.

The store was founded in 1985 by David Smith on North Henry Street next to Plaza Tavern. He wanted to make underground, art, foreign and off-the-wall titles, along with mainstream Hollywood productions, available to the general public.

When Smith retired in 2003, the business was purchased by former manager Lisa Brennan, who ran the store until 2014. With her departure, the staff of the business — which included current owners Peterson, Nick Propheter, Helen Boldt and Andy Fox — created a co-op and used crowdfunding to raise money to buy the business from Brennan.

Peterson remains the lone holdout willing to continue on with Four Star, but is working to recruit others who may be interested in investing or volunteering their time behind the counter. One of those is Doerr, 27, who has been a customer for about 18 months but has known of the store since he was in high school in Eagle River because of visits to Madison with his family. Doerr’s love of film grew while he was at UW-Stevens Point, and when he moved to Madison in early 2018 for a paralegal job, he immediately signed up for a subscription to the store.

“It is a physical, brick-and-mortar entity, which is such a rarity in this day and age, and I put a lot of value on place, physical place,” said Doerr, who appreciates the breadth of the store’s collection.

“I’m someone who has very eclectic tastes. Four Star has a very unique collection in the sense that it’s very broad and it includes such a diversity of genres and time periods. I’ve found that, more often than not, conventional streaming options just don’t have a selection that satisfies me.”

For the last seven years, Four Star has been in a 2,500-square-foot space next door to Riley’s Wines of the World and in a multi-tenant building that includes Asian Kitchen, Mirch Masala and soon, Mania, a virtual reality gaming lounge and cafe.

While the main floor of the video shop has racks of new releases such as “Green Book,” “Free Solo” and “First Man,” along with a Sharp color tube television that is constantly playing movies, the bulk of the store’s collection is in the basement, which is accessed down a black, steel spiral staircase. This is where there are experimental films by Andy Warhol on VHS and a collection of around 2,200 foreign films. The basement also holds dramas, comedies, documentaries and television shows including “30 Rock,” “Arrested Development” and “Boardwalk Empire.”

The store is taking cues from other successful video stores such as Scarecrow Video in Seattle, an independently owned, nonprofit video sales and rental store that bills itself as the largest in the country. Four Star is also looking at Beyond Video, a nonprofit store in Baltimore that recently opened, and Vidiots, a video store that closed in 2017 in the Los Angeles area but this year came back to life in part of a cinema complex.

Doerr is convinced that with more outreach, community events, and partnering with other film organizations and those that make films, Four Star can remain relevant and in business.

“There’s a high level of interest from our current customer base,” Doerr said. “I see the store becoming a hub of all things related to film within the Madison community.”

Four Star reduced its hours in April and is also closed on Wednesdays. For Peterson, who last week had a copy of the book “How to Form a Nonprofit Organization” on the store’s front counter, the idea is not about getting rich renting movies. Instead, it’s all about access to films and building community.

“We make enough to pay our bills and buy new movies, and that’s all I’ve ever expected from this,” said Peterson, who has a second job as a telemarketer. “This is a labor of love. I feel like our customers are so dedicated that if they’re giving an indication that they still want to come here, I feel like we have almost have an obligation to keep it available.”

A benefit to raise money and promote a crowdfunding campaign for Four Star Video is set for 8:30 p.m. Thursday at Genna's Lounge, 105 W. Main St.

The event will feature a screening of David Byrne's musical, "True Stories." A donation of $5 to $10 is suggested.

There was a time when video rental stores were as easy to find as gas stations.

Rubber, art, music and a collective transformation in Eau Claire

Boutique hotels, private and public investment has made Eau Claire an artisan destination.

The Iron County marina on Lake Superior was destroyed by floods in 2016, but a $14 million project has restored and vastly improved the remote outpost.

Lewis Peterson, co-owner of Four Star Video Cooperative, is trying to keep the doors open on the video store that was founded in 1985 on North Henry Street. The store, the last independently owned video store in Madison, is now at the corner of North Broom and State streets. 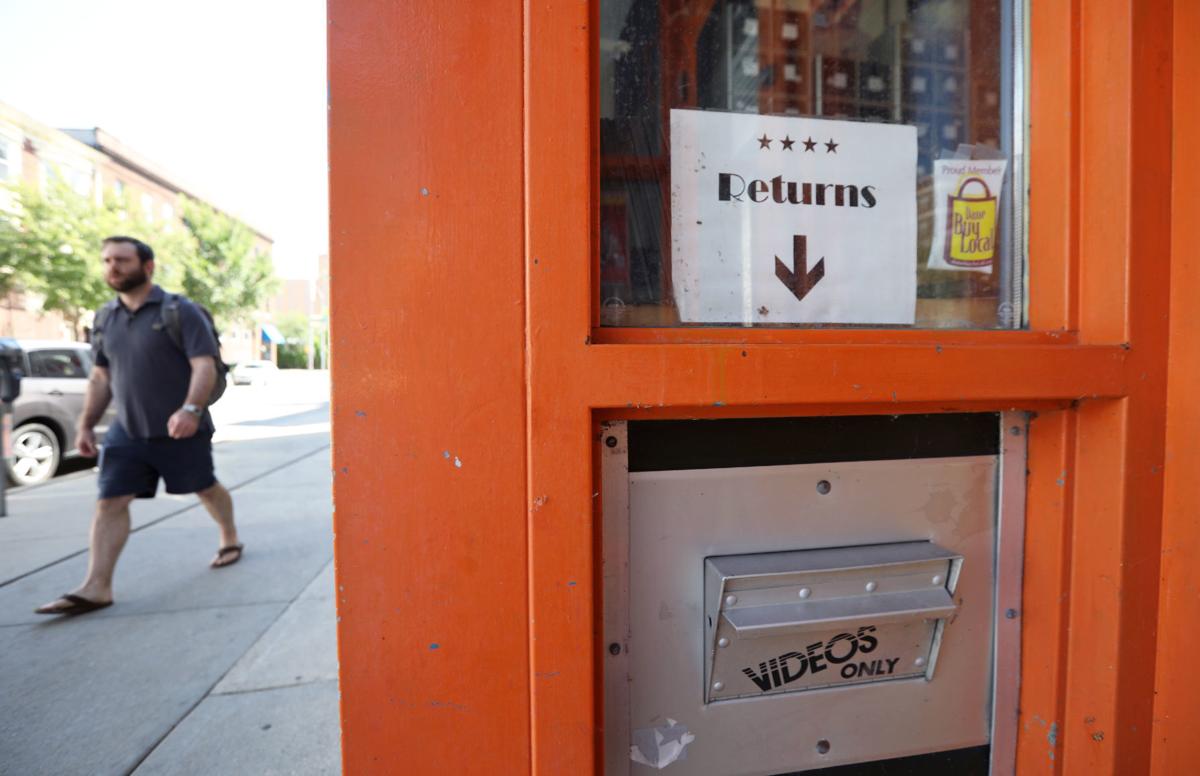 The video return drop box is a rarity in many communities but a staple at Madison's Four Star Video Cooperative. 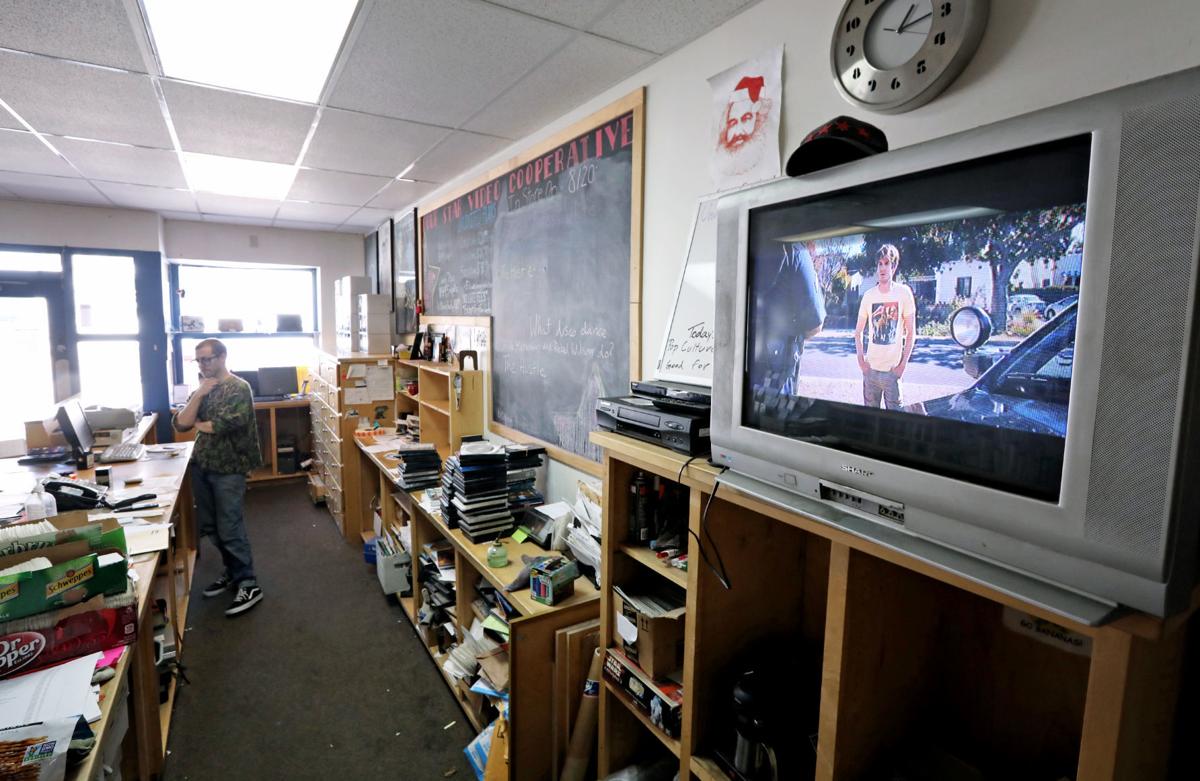 The movie "Under the Silver Lake" plays on a tube television at Four Star Video Cooperative, 449 State St. The shop is one of the few places to rent a video in the Madison area and is looking to move to a more affordable location, increase its involvement in community events and continue to offer a wide genre of films, including over 2,200 foreign film titles. 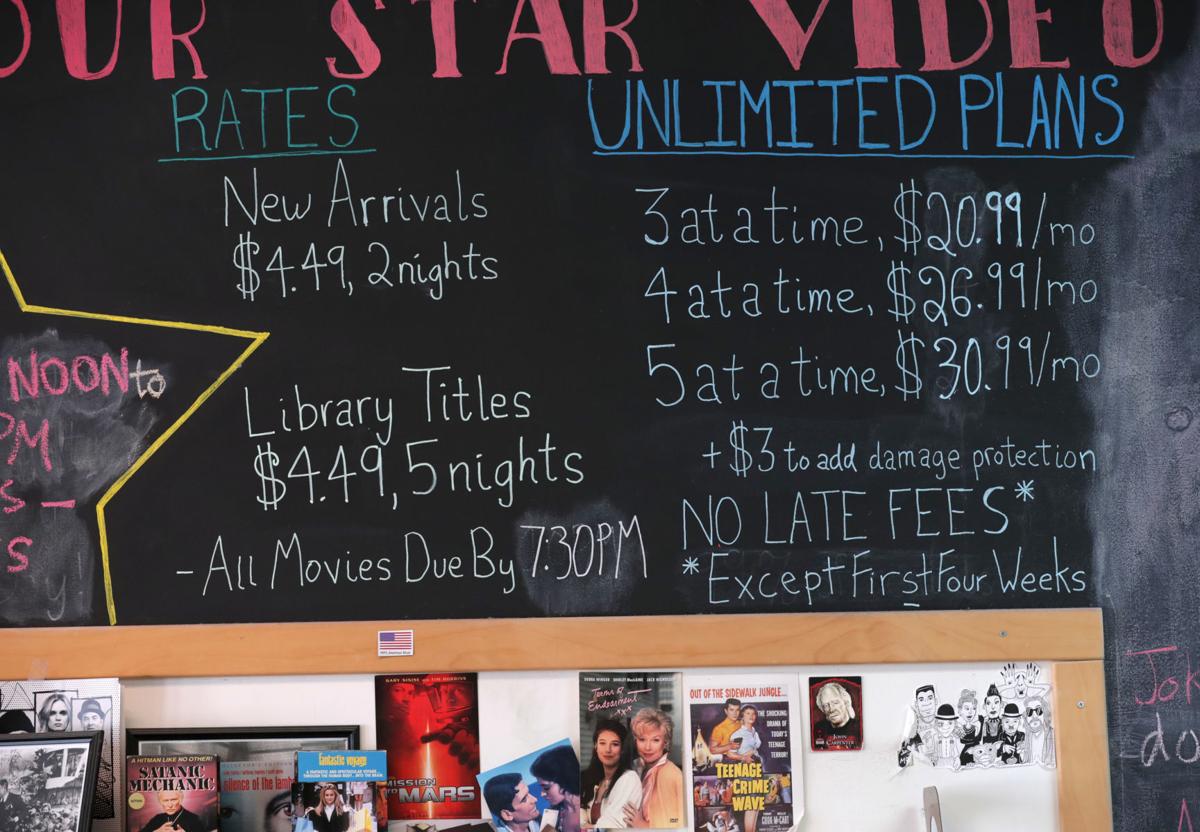 A chalkboard behind the counter offers information about rental fees, new movies and even the occasional joke. 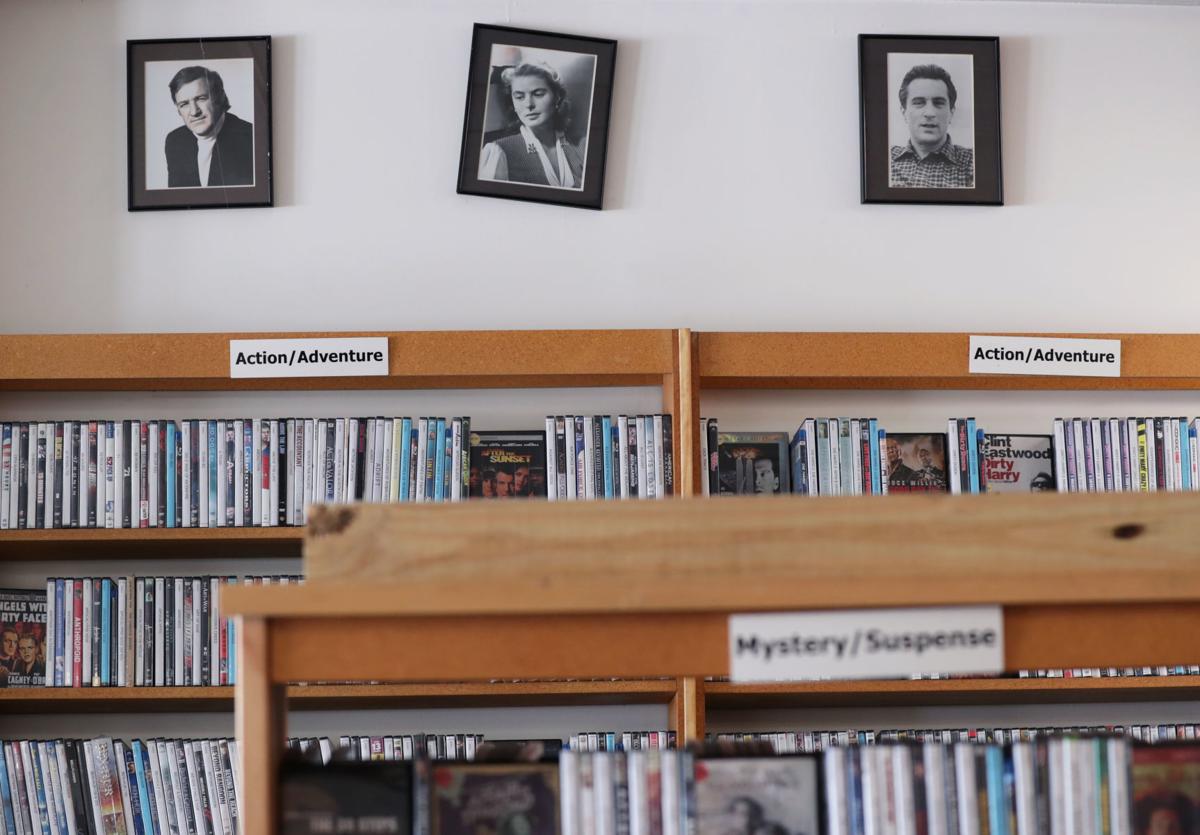 Gene Hackman, Ingrid Bergman and Robert De Niro look over part of the movie collection at Four Star Video Cooperative. The majority of its ownership group is leaving the store, but there is an effort to maintain the business with new owners, investors and volunteers.

Four Star Video Cooperative has been at North Broom and State streets for the past seven years. 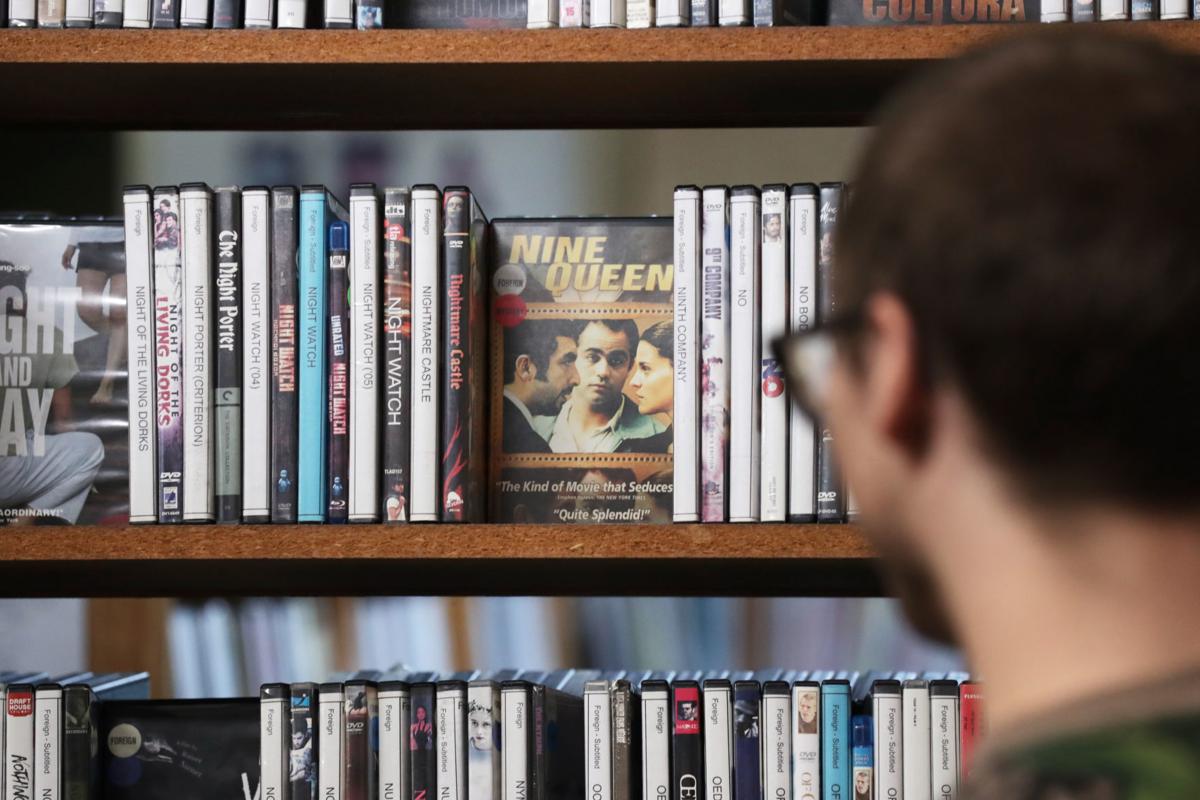 Lewis Peterson, co-owner of Four Star Video Cooperative, looks over some of the estimated 20,000 movies at the store. 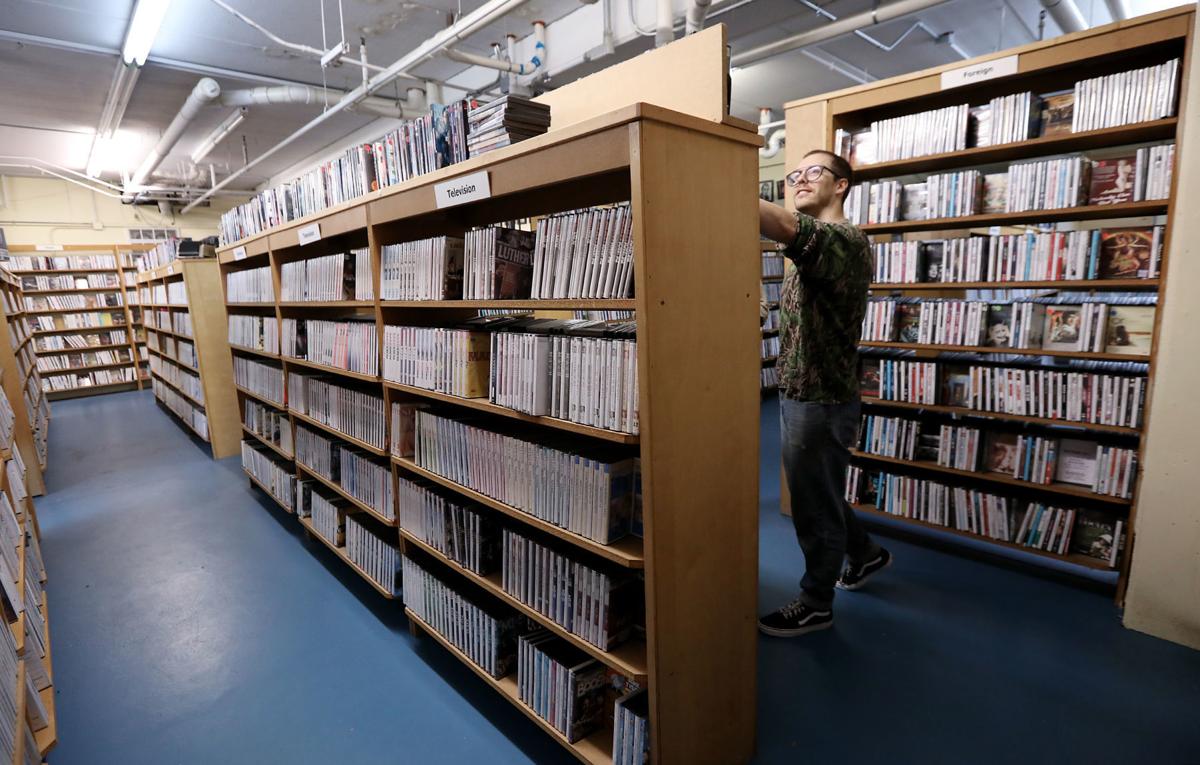 The lower level of Four Star Video Cooperative is where the bulk of the movie titles are displayed. But the actual DVDs are stored in a massive 28-drawer wooden cabinet behind the front counter.