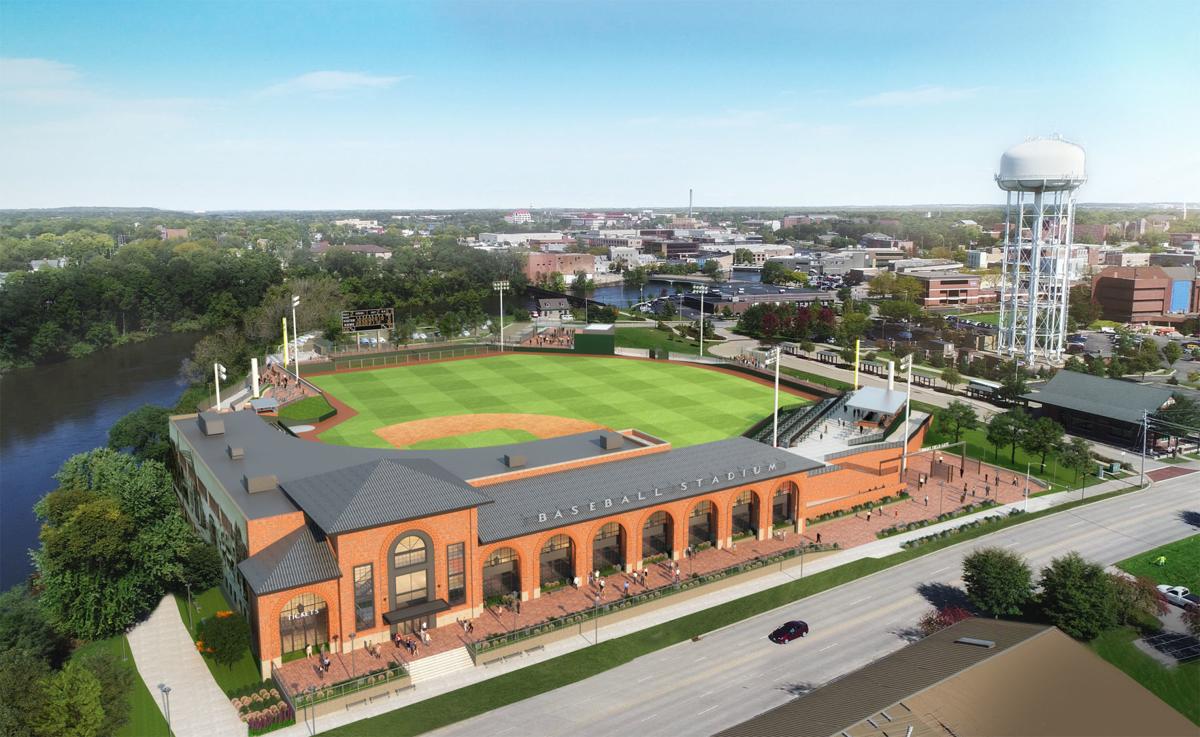 Renderings of a proposed baseball stadium in downtown Beloit for the Beloit Snappers have been unveiled. Construction of the 3,500-seat venue with artificial turf field is scheduled for this spring. The Snappers are a Class A affiliate of the Oakland Athletics and play in the Midwest League.

Visit Beloit has agreed to purchase a former church building constructed in 1914 at 656 Pleasant St. from the city of Beloit for $1.  From 1998 to 2018, the building had been home to the Angel Museum. Visit Beloit plans to spend more than $2.6 million to transform and expand the facility into an event center, welcome center and offices.

The redevelopment of downtown Beloit is taking more big steps that will create a visitor and event center in a historic church building while ground is expected to be broken this spring for a new stadium designed to retain the city’s minor league baseball team, officials announced Thursday.

Visit Beloit, the lead tourism agency in the Rock County city of about 37,000, has agreed to purchase for $1 a former church building at 656 Pleasant St. that for years was home to the Angel Museum and spend another $2.6 million on upgrades.

Meanwhile, Hendricks Commercial Properties has released renderings for a proposed 3,500-seat stadium with administrative offices and player facilities, concessions, restrooms and a stadium club facility for more than 300 people that can be used year-round.

The projects are in addition to others that include the $38 million renovation of a powerhouse along the Rock River by Beloit College into a student center, the construction of Hotel Goodwin and the Ironworks Hotel and nearly 15 years of other redevelopment projects in the city’s downtown.

“That stretch of downtown Beloit, we’re really transforming it to being a new hub for creating activity and an active night life scene,” said Celestino Ruffini, Visit Beloit’s CEO. “It’s exciting time (to) be in a community that gets behind and celebrates all these wins.”

The stadium project would be constructed on seven acres of land near Beloit City Hall, and just north of Shirland Avenue and is designed for the Beloit Snappers, a Class A affiliate of the Oakland Athletics. Major League Baseball is in the midst of eliminating dozens of minor league teams with substandard facilities, and the Snappers, who play at Pohlman Field, constructed in 1982, could be among the teams on MLB’s list.

The Snappers, who play in the Midwest League, have an agreement to play at Pohlman through 2020, but a new stadium would make it more difficult for MLB to eliminate the team.

“These renderings further bring to life an exciting future for community members in the Beloit region,” said Diane Hendricks, who along with her now late husband, Ken, founded ABC Supply Co., one of the largest building supply companies in the country. “This shared community space will create a strong connection to downtown Beloit and provide a beautiful, family-friendly amenity.”

The main concourse will wrap 360 degrees around the field and features a main entry gate at center field. Outdoor group areas will be located in left field and right field with a kid’s playground and inflatable area planned for the outfield concourse.

In addition, the playing surface in the stadium will be an artificial turf field, allowing the facility to host other non-baseball events. Quint Studer, a Janesville native who also owns Pensacola, Florida-based Studer Entertainment & Retail and is co-owner of a minor league baseball team, the Pensacola Blue Wahoos, has plans to purchase the Snappers and is optimistic about what the stadium project can do for the team and community.

“With the leadership of Diane Hendricks and others who are stepping up to build a fabulous stadium in Beloit, this revitalization project brings the city one step closer to becoming America’s renaissance city,” Studer said. “We are so grateful to bring our experience and investment to such a noble project.”

Former church gets a third incarnation

Visit Beloit’s plan was selected from six proposals submitted after the city last spring sought requests for the former church property located on the east side of the river near Beloit College and just north of the Ironworks Hotel. The deal is scheduled to close soon and is designed to develop the site into a new use compatible with the surrounding land uses, complement the existing business mix and be economically viable for the long term, according to city officials.

“Visit Beloit’s proposal stood out as an impressive option for the revitalization of this space,” said Lori Curtis Luther, Beloit’s city manager. “The unique plans for the building will make it an outstanding addition to downtown Beloit.”

For 20 years, the building housed the Angel Museum that boasted a collection of more than 12,000 angels made from a variety of mediums including porcelain, crystal, plastic, clay and wood. But in 2018, due to a lack of funds, memberships, sponsors and volunteers, the museum closed. However, the building dates to the early 1900s and has a rich history in the city.

Constructed in 1914 of brown brick and in Romanesque style, the church was chartered by the Diocese of Milwaukee to St. Paul’s Catholic Church as a mission to serve Italian immigrants. It includes stained glass windows, a bell tower and a peaked roof. The church closed in 1988 and was sold to Beloit College but in the 1990s was slated for demolition.

However, it was given a reprieve by the Beloit Historic Preservation Commission at the urging of former parishioners. The building then underwent a massive restoration with the Angel Museum opening in 1998.

The sale of the building to Visit Beloit includes conditions that allow the city to repurchase the property should it not be developed after three years or should Visit Beloit look to sell the property to another buyer.

According to the plans, Visit Beloit, which is currently housed in temporary office space in the Eclipse Center, a few blocks north of the proposed new space, the renovation will be completed in two phases. Phase one, scheduled to begin this year, calls for the existing building to house Visit Beloit’s office temporarily on the lower level and the main floor converted into an events venue at a cost of $434,000. The $2.1 million second phase, scheduled for 2021, would include a 7,980-square-foot office suite addition that would house Visit Beloit, as well as three other tenants.

“Our organization will embark on a marvelous transformation of this historic property along the banks of the Rock River in the heart of our City Center,” said Ruffini. “This property acquisition begins a new chapter toward our organization’s long-term vitality.”

BELOIT — For 20 years, whenever anyone arrived at the door of the Angel Museum, Joyce Berg was there to welcome them in.

See explosion triggered by US Navy cause earthquake

See explosion triggered by US Navy cause earthquake

'Had to square up with him': Woman describes bear encounter in Alaskan woods

'Had to square up with him': Woman describes bear encounter in Alaskan woods

Renderings of a proposed baseball stadium in downtown Beloit for the Beloit Snappers have been unveiled. Construction of the 3,500-seat venue with artificial turf field is scheduled for this spring. The Snappers are a Class A affiliate of the Oakland Athletics and play in the Midwest League.

Visit Beloit has agreed to purchase a former church building constructed in 1914 at 656 Pleasant St. from the city of Beloit for $1.  From 1998 to 2018, the building had been home to the Angel Museum. Visit Beloit plans to spend more than $2.6 million to transform and expand the facility into an event center, welcome center and offices. 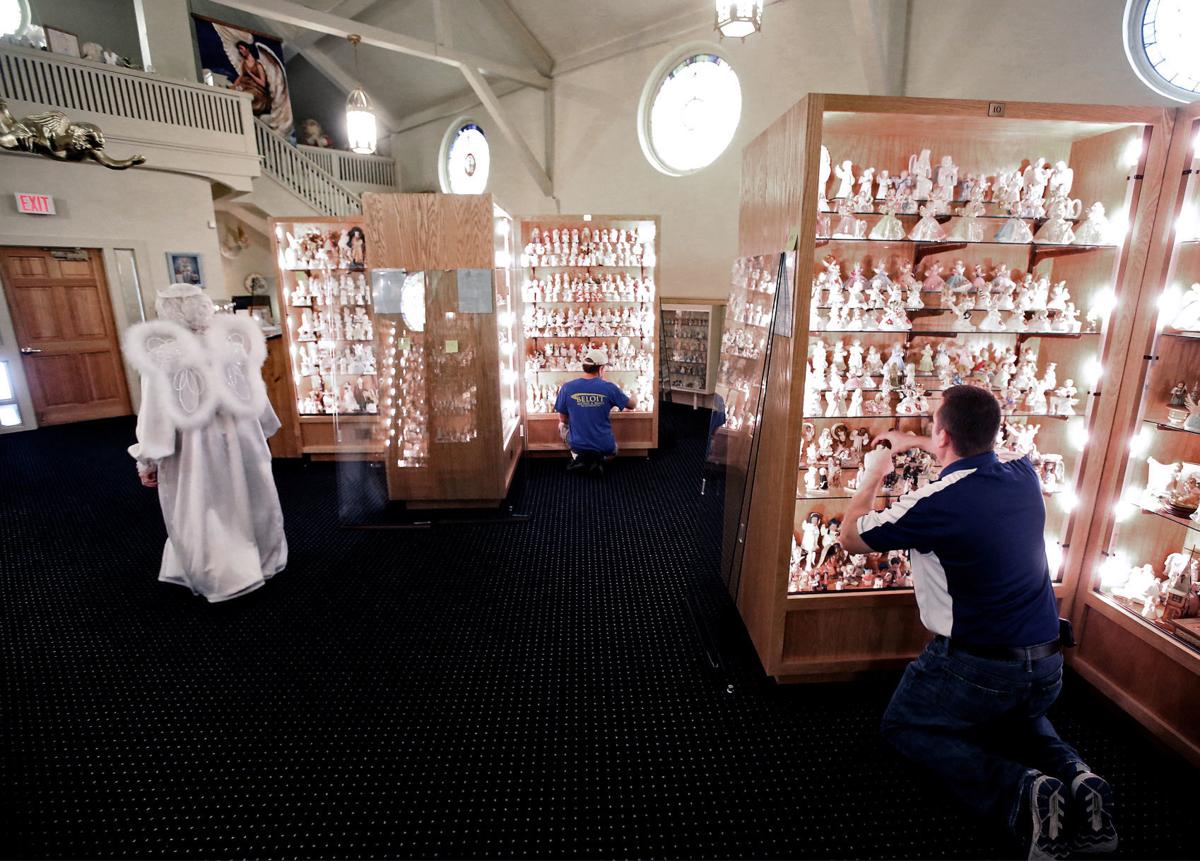 Workers with Beloit Auction & Realty catalog the collection of angels at the Angel Museum in Beloit to ready them for auction in October 2018. The space will soon be home to Visit Beloit, which is planning an event center, offices and visitor center. 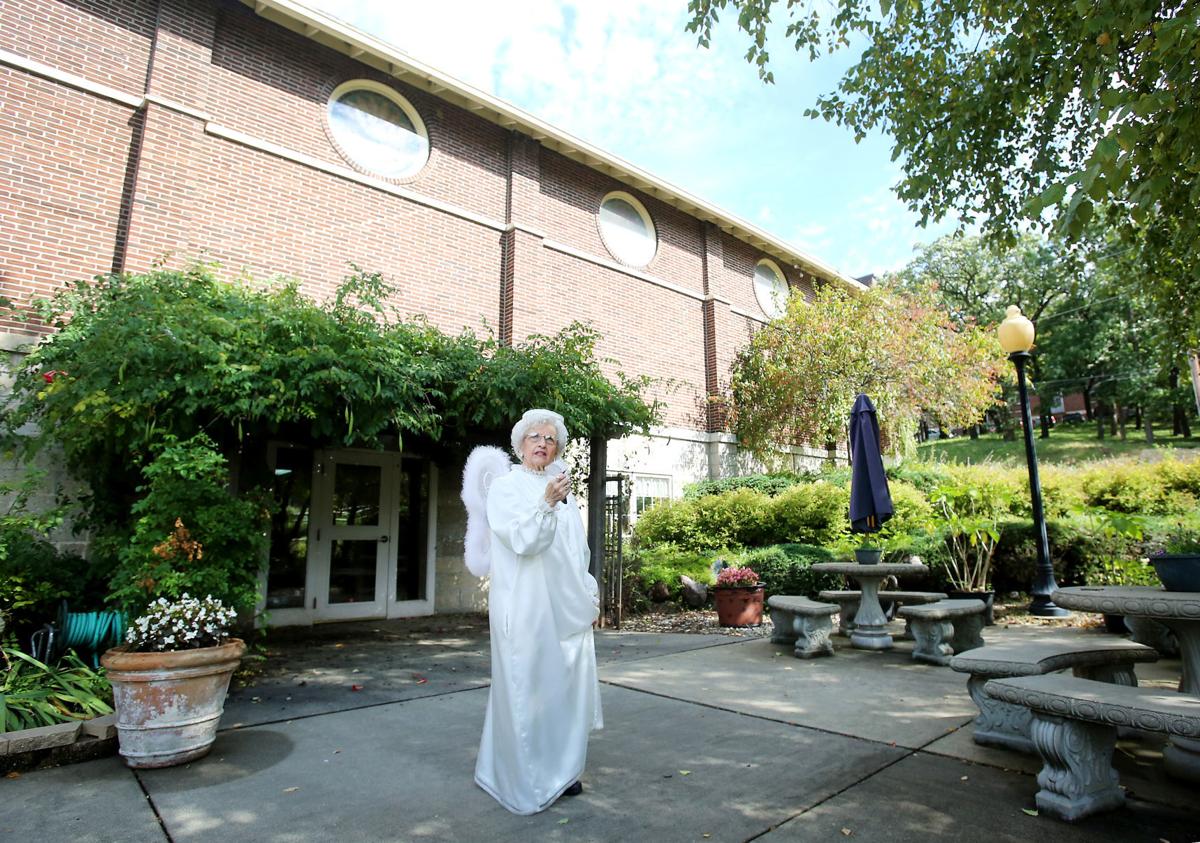 Dressed in an outfit she typically wears for visitors at the Angel Museum, Joyce Berg stands in the museum's garden along the Rock River in Beloit just days before her collection of angels were auctioned off in October 2018. 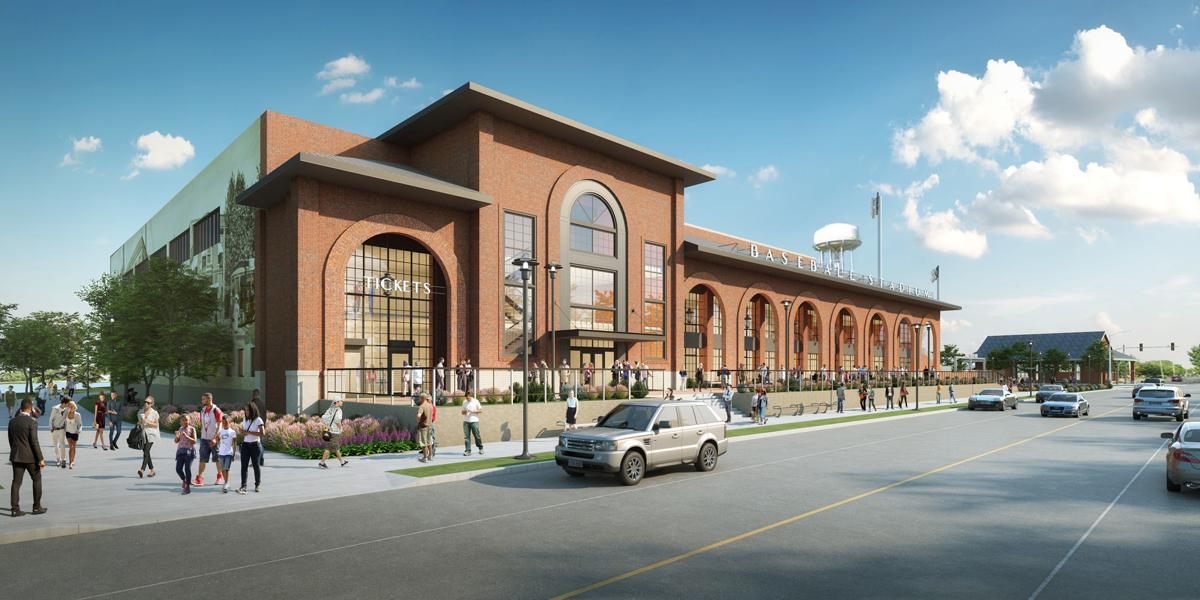 This view shows the exterior of a proposed 3,500-seat baseball stadium in Beloit for the Snappers. Major League Baseball is considering removing 40 teams from its minor league system and a new stadium would offer some protection for the Snappers, who play at Pohlman Field, constructed in 1982. 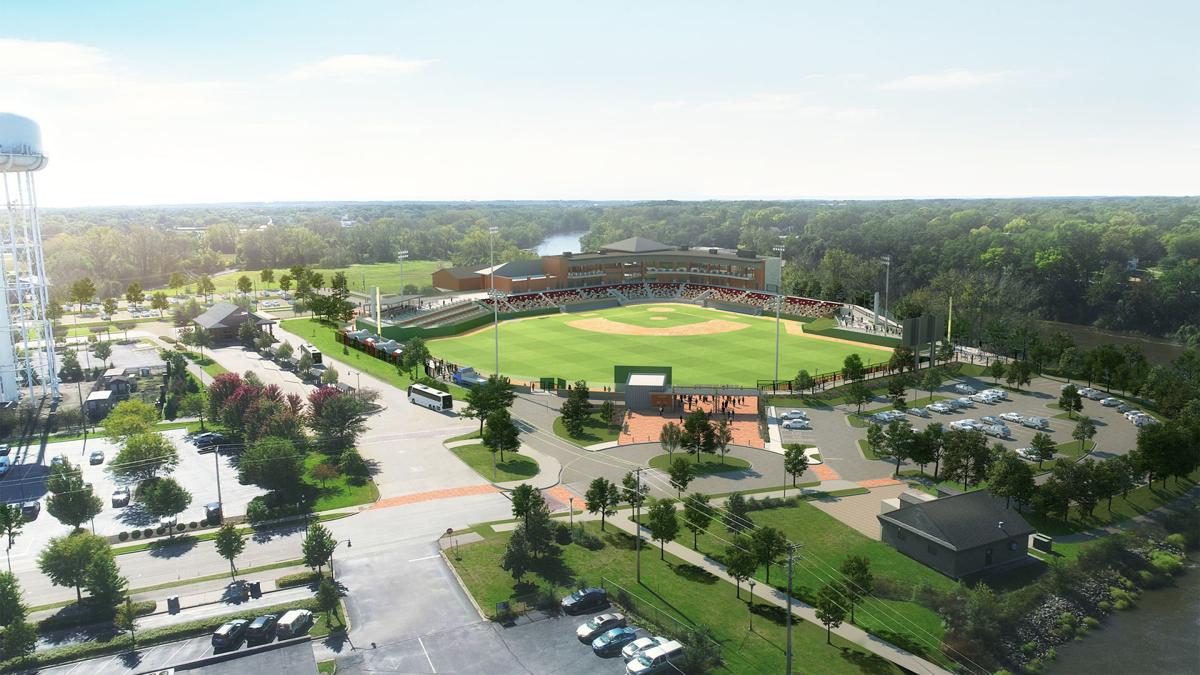 A new baseball stadium in Beloit would include space for special events and non-baseball activities.