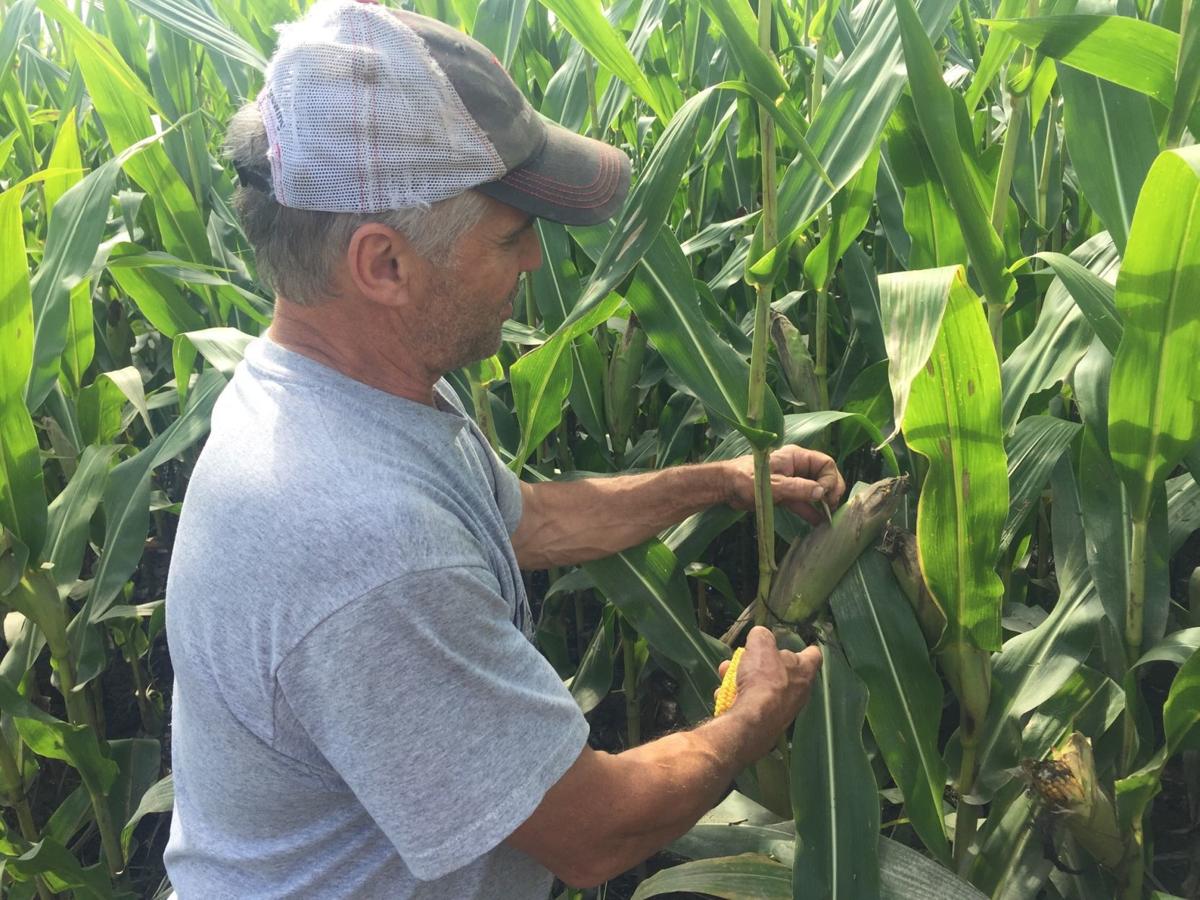 Paoli dairy farmer Tom Sarbacker inspects an ear of field corn that was still wet after having been soaked by floodwaters from the Sugar River. Wet corn is prone to becoming moldy, and the damaged corn can be deadly if fed to cows. 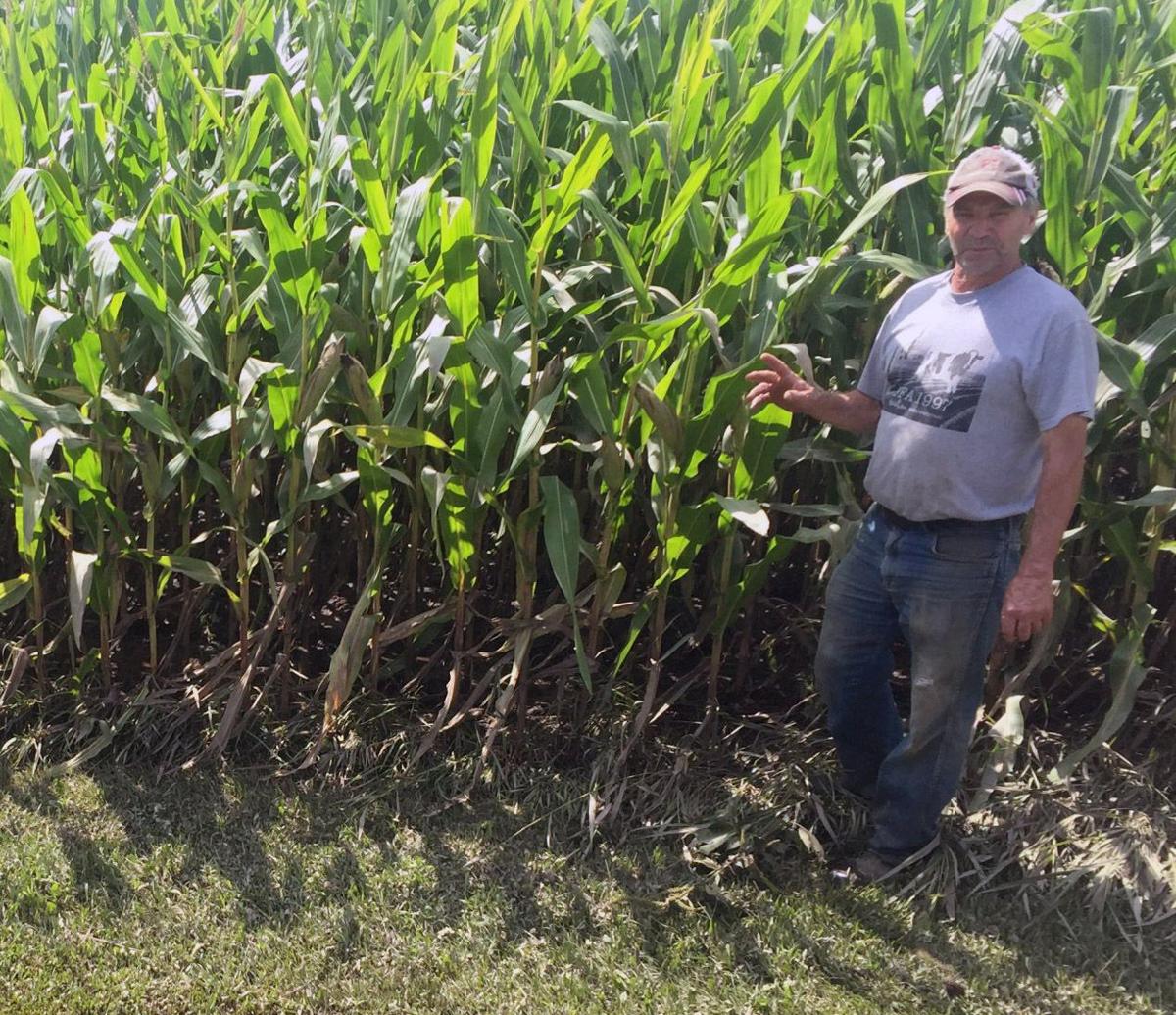 Floodwaters from the Sugar River finally receded enough by Thursday for Paoli farmer Tom Sarbacker to inspect his corn that had been nearly submerged Tuesday.

After a cold spring — including a rare mid-April snowstorm that delayed planting — some Dane County farmers took another gut punch this week in the form of unexpected floodwaters surging through their fields.

For local farmers already facing low prices for milk and grain, the struggling corn and soybean crops represented a last chance to make money this year.

But that opportunity was literally washed away earlier this week when record rainfall in the western and southern parts of the county produced flooding that wreaked havoc on farm fields before moving on to ravage nearby villages such as Belleville, Black Earth, Cross Plains, Mazomanie and Paoli.

“This is the final slap in the face,” said Heidi Johnson, crops and soils specialist for the UW-Extension’s Dane County office. “I think it is leaving everybody feeling defeated.”

Paoli farmer Tom Sarbacker estimated Thursday afternoon that 50 percent to 75 percent of his 165 acres of crops are still standing in water after the Sugar River poured over its banks on his property and nearly submerged some of his tallest corn.

“I’d guess that 25 percent (of the crops) had a river running through it for a couple of days,” he said.

If water doesn’t drain quickly from fields, the corn’s near-mature ears can become moldy and stalks can eventually weaken and collapse under the weight of the plant, according to Johnson.

Soybeans that weren’t knocked down by the floods also are susceptible to disease, she said.

The best-case scenario is that the wet plants will dry out by harvest this fall with a slight drop in yield.

“Making sure the yield was good was the big thing for farmers this year,” Johnson said. “The northern part of the state is dealing with drought conditions, and farmers around here thought they were escaping the worst of the weather. So this was a big shock for everyone. You just don’t expect this kind of rain in August.”

Sarbacker’s corn planted closest to the river is still standing, but water marks can be seen more than halfway up the more than 10-foot-tall plants.

While the floodwater had receded and the Sugar River was flowing fast within its banks Thursday afternoon, the corn was in waterlogged muck. Sarbacker became concerned when he inspected an ear and found it wet underneath the husk.

“Wet corn is prone to mold,” he said. “That mold can produce aflatoxins that can create all kinds of health problems for (cows) if its gets into their feed. It can make cows very sick and it can make them abort pregnancies. It can be disastrous.”

That corn was well ahead of plants in other parts of his farm, located in the town of Montrose. While he was lucky to get his fields planted before the heavy rains hit in early May, the progress of his corn in some fields was stunted by repeated heavy rains this summer.

Most farmers in the area have been facing similar problems. “There’s a lot of unevenness,” Sarbacker said. “There are parts of fields where no corn is growing at all.”

While the 61-year-old Sarbacker says his farm has never been wetter, he and his wife, Vicki, are thankful that none of the farm buildings or their house — a replacement for their home that was destroyed by a fire five years ago — was affected by the flooding.

This still might not be Sarbacker’s worst year ever. He said the drought in 1988 that forced him to buy all of the hay and corn he feeds to his 65 to 70 milking cows was a tougher year for farming.

“But as far as income, I’m not sure if (1988) was worse,” Sarbacker said. “We used to ride the wave of milk prices going up and down but it never goes up anymore. It just stays down.”

Sarbacker still hopes he can salvage something from this year’s growing season. He said he hoped Friday’s rain didn’t worsen the flooding problems and that next week’s forecast calling for warmer temperatures is accurate.

“Some hot weather might be a good thing for this go-round,” Sarbacker said. “It might dry out things around here.”

Sarbacker offered nothing but a shrug after he looked around and saw the floodwaters had left behind a blanket of mud covering an alfalfa field, along with debris that included large stones and tree branches.

He said other farmers are facing bigger problems.

“What can you do?” he asked. “You have to figure things out.”

Volunteers have been working to fill sandbags for area residents and businesses to use to prevent water from seeping through windows and doorways.

Wisconsin's major crops were hampered by extreme weather events during the growing season.

Belleville rebranding and touting its assets with eye on growth

Downtown redevelopment, better use of the Sugar River, more housing and a new library, police station and revamped train depot are being touted as a way to attract businesses and residents to the southern Dane County village.

Paoli dairy farmer Tom Sarbacker inspects an ear of field corn that was still wet after having been soaked by floodwaters from the Sugar River. Wet corn is prone to becoming moldy, and the damaged corn can be deadly if fed to cows.

Floodwaters from the Sugar River finally receded enough by Thursday for Paoli farmer Tom Sarbacker to inspect his corn that had been nearly submerged Tuesday.