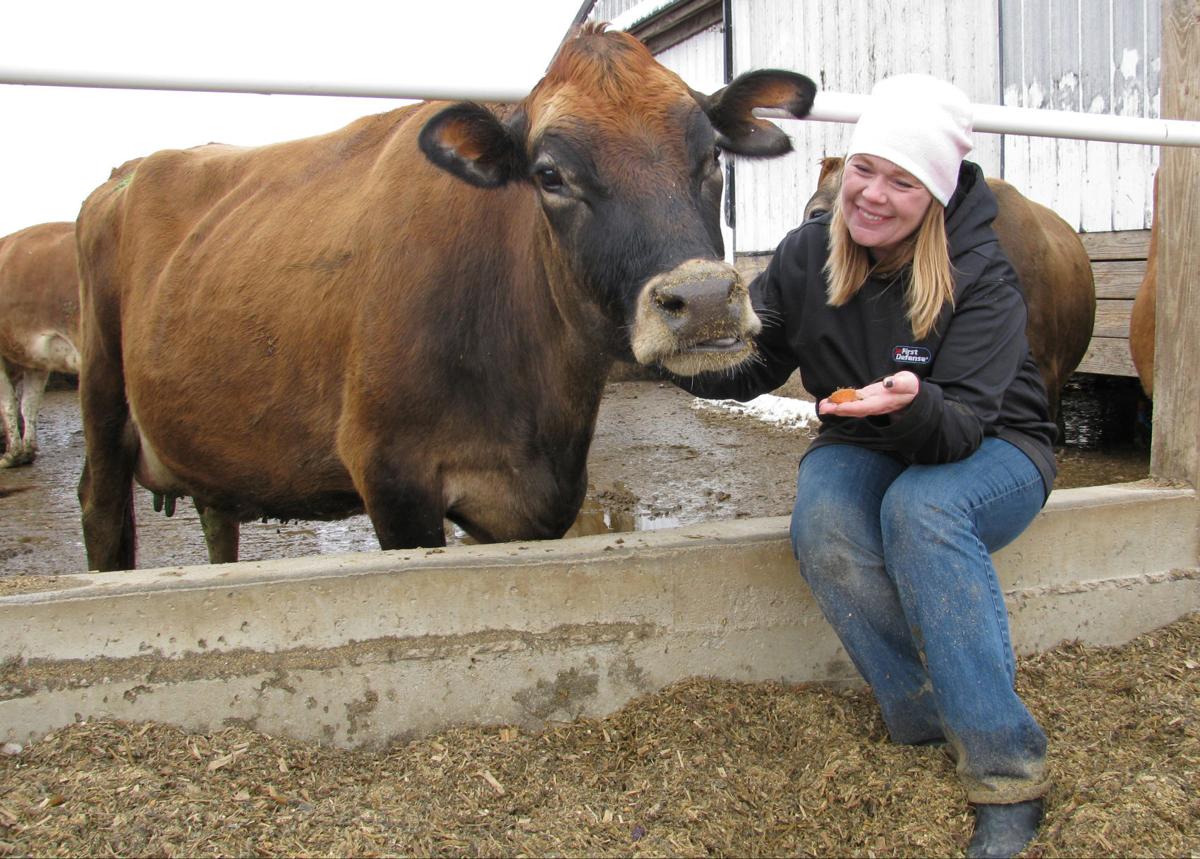 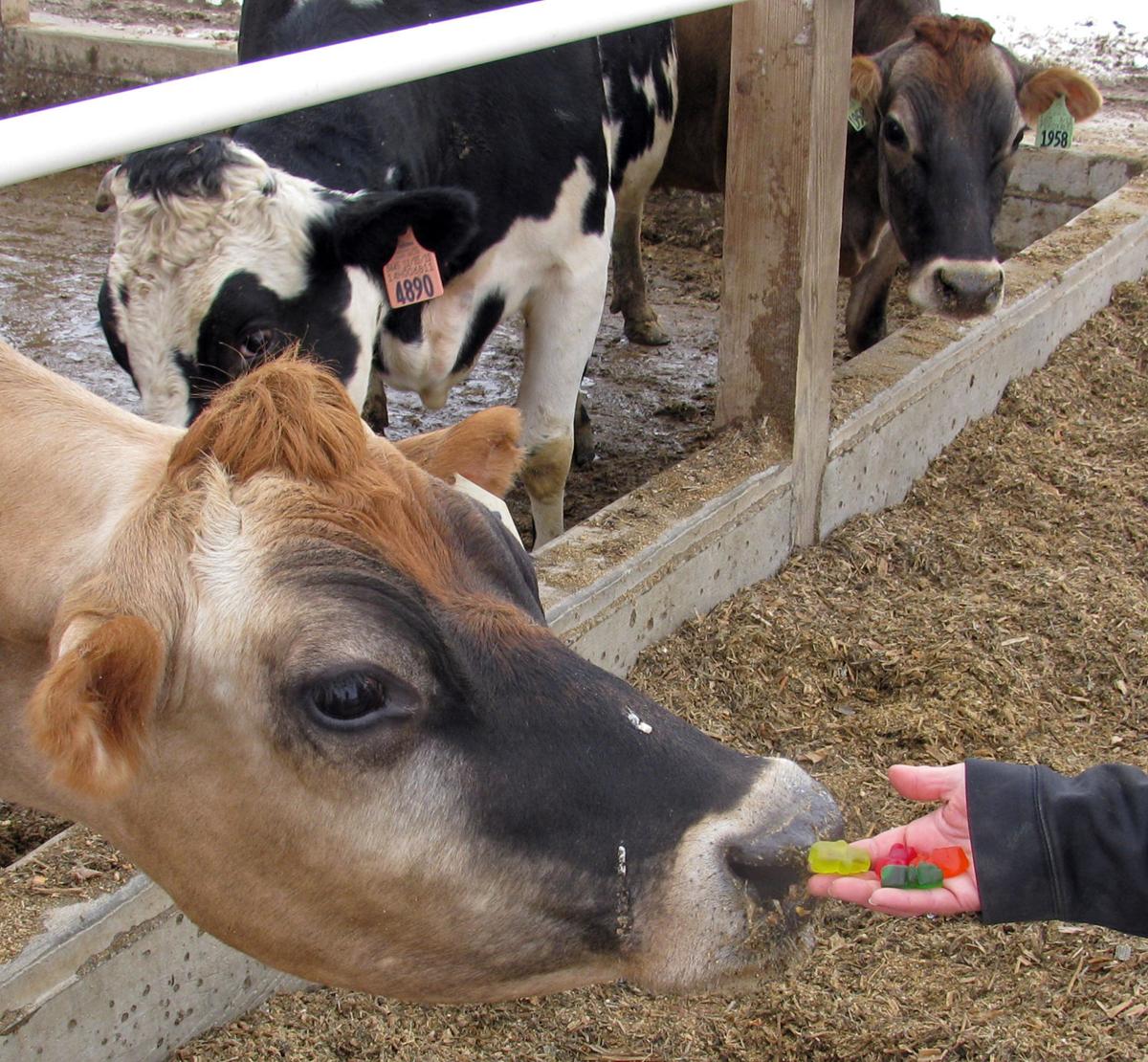 Spilled Skittles on a country road put a focus on farmers using candy for animal feed, which dairy farmer and nutritionist Laura Daniels says is OK because it can aid digestion and provide energy. 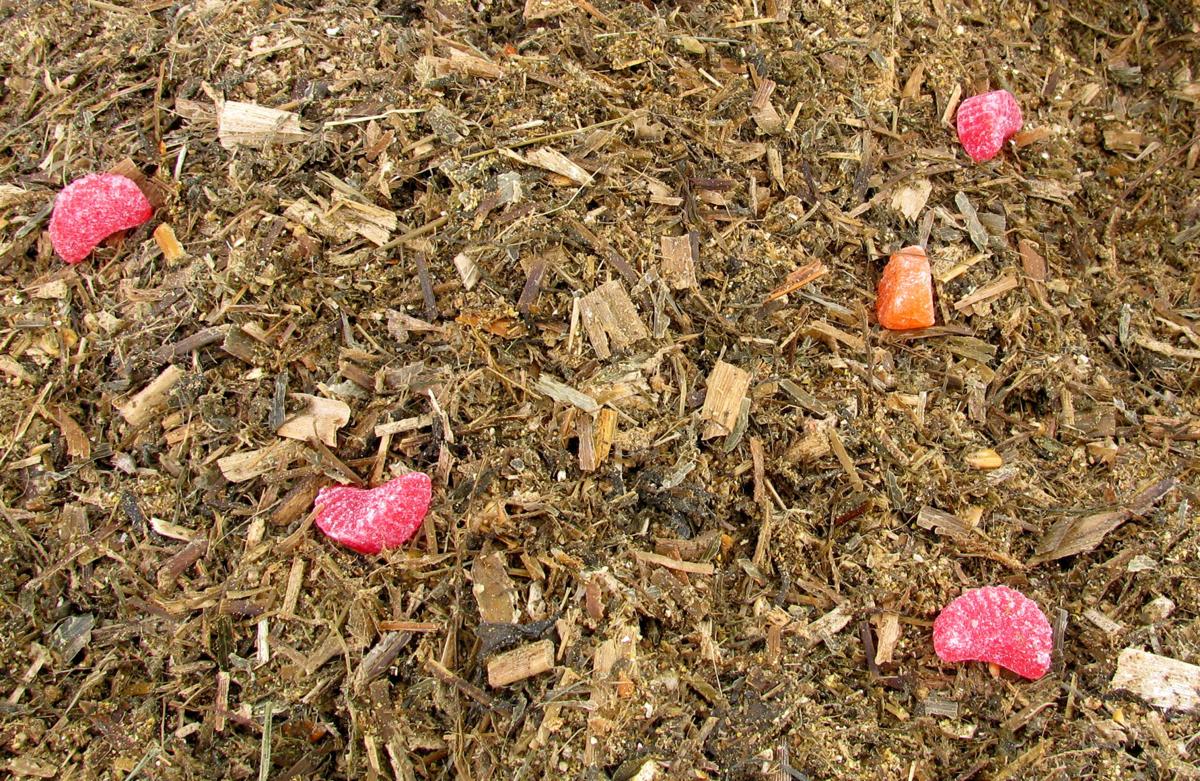 Dairy cows enjoy the digestive benefits of eating gummy candy, but they don't appreciate the flavor because they swallow them whole, according to dairy nutritionist Laura Daniels.

COBB — As a dairy farmer and a dairy cattle nutritionist, Laura Daniels felt she had to speak up after a report that went viral focused on why mislabeled Skittles that had spilled from a truck on a Wisconsin country road 12 days ago were heading to a dairy farm to be used as animal feed.

“What shocked me were the questions asked by people who I thought should know the answer,” Daniels said. “I got a call from a friend I went to school with at (UW-Madison) who wasn’t a dairy science major but was an agriculture major and she asked me, ‘Do farmers really feed candy to their cows?’”

That prompted Daniels, a vocal proponent of agriculture, to do a Facebook video in which she explained how sugar from Skittles and other candies are legitimately used as a high-energy dietary supplement that helps cows with digestion. At the end of the video, she feeds some of her Jerseys some gummy candy. “I decided that this issue has my name written all over it,” she said in an interview.

Daniels figured if her friend didn’t understand the value of pure sugar in a cow’s diet, the rest of the world would be completely in the dark. She worried about people accepting opinions from people who were uninformed or pushing agendas such as veganism as gospel.

“In this issue there was a lot of that because there is so much bashing of sugar in human diets,” she said. “As a parent I understand the concern for sugar, it’s just that ruminant animals are totally different than humans. The same logic can’t be applied.”

The main stomach of a cow is a fermentation vat, and sugar from candies like Skittles combines with other foods to help the good bacteria break everything down, according to Sylvia O’Netty, a nutritionist for VitaPlus, a Madison-based animal feed company. The bacteria quickly metabolizes the sugar, and it has no effect on the milk or meat, she said.

In the past when corn prices were high, farmers used the candy and sugary foods as a substitute, but today they are used mostly as a supplement, said Randy Shaver, a professor and dairy nutritionist at UW-Madison and UW Extension. Sugary foods typically account for about 2 percent of a cow’s diet, he said.

“Everything is measured,” Shaver said. “Cows are fed total mixed rations. They take the alfalfa and the hay and the corn and soybean meal and it’s mixed together. It’s all regulated by weight. They put in a small amount of Skittles. You might feed them a pound of Skittles per day and use a pound less of corn.”

Not every farmer feeds candy to their cows. Daniels and her husband, Jarred Searls, own a dairy farm near Cobb in Iowa County and they stopped about four years ago after they began purchasing feed that included ground-up sugary breakfast cereal as an energy supplement. VitaPlus does not add any supplements to its feed because most of the energy comes from the corn, but some of their customers add molasses or whey permeates, according to O’Netty.

“There’s an art behind feeding these cows,” O’Netty said. “They are definitely eating a lot better than a lot of humans out in the world.”

Most dairy farms work with a nutritionist who looks at body size and weight, growth requirements and level of milk production to help determine the portions, Shaver said.

Another factor is where the cows spend most of their time. “Animals housed outside need more energy to stay warm, so their requirements are going to go up. The spilled Skittles may have been going to a farm for that reason,” Shaver said.

The Skittle spill was discovered by a Dodge County sheriff’s deputy on a road south of Beaver Dam on Jan. 18. The Sheriff’s Office said the candies, which were missing the “S,” fell off a truck en route to a farm it did not name.

The candies were discarded because they were not completed due to a power outage at the Illinois factory, according to Mars Inc. spokeswoman Michelle Green.

Such products that don’t pass muster are sold to a third party that can sell it for animal feed, Green said.

It is not known if the farmer who spilled them bought the haul from Mars or a third party. “We don’t know how it ended up as it did and we are investigating,” Green said.

Discarded candy and other foods used for animal feed are regulated by the U.S. Department of Agriculture, so claims they contain floor dust from sweepers and other potential contaminants aren’t true, according to Daniels.

Most of the time, the foods don’t make the cut by strict quality control guidelines for reasons such as poor coloring jobs, a missing piece or not enough ingredients in the mold, she said.

Daniels’ farm used gummy candies from a Minnesota supplier as energy supplements until about four years ago. Most of them were miscolored gummy sharks and gummy worms or a gummy bear that was missing a leg, Daniels said.

“They say you can’t put them in the containers and send them to stores because the children would get upset,” she said. “But I have to laugh at that because what’s the first thing kids do when they get a gummy bear? They bite off the heads and the legs.”

The candy Daniels and her husband purchased arrived in one-ton boxes on pallets, which was similar to the box of Skittles that spilled. It was not cheaper than corn, Daniels said, but it was worth it because of its nutritional value.

They stopped using it because it was difficult to move it with a skid loader from the container it arrived in and then blend with the rest of the feed. “It was very labor intensive,” she said.

But that doesn’t mean she thinks any less of candy as an energy supplement. It’s so important she felt it was her duty to explain it in her video after she read all the negative comments about it on a Dodge County Sheriff’s Office Facebook post about the Skittles spill.

Her video has garnered about 136,000 hits, more than anything else Daniels has posted on Facebook. She was ecstatic when a teacher called shortly after she posted the video and asked if she could use it as a teaching tool for her classroom.

“I felt that the right people weren’t entering into the conversation and I felt the right people had not put themselves out there and answered some of the questions from the people who just don’t know what’s going on,” she said. “I thought there was a really good story to tell.”

Is the Government Coming for a Piece of Your Social Security Checks?

You may be surprised at the answer.

If You Can't Answer This Question, You're Not Ready for Social Security

Claiming benefits at the wrong time could be disastrous for your retirement.

The plan could flood the market with additional shares and dilute the stock, making it more expensive for a buyer to acquire a controlling stake.

Planning to wait as long as possible to take benefits? You may want to rethink that.

Contributing to a retirement savings account may put you in the running for a Saver's Credit.

Don't end up with less income than you expect.

How to be a savvy shopper amid Cyber Monday hype

Besides recognizing FOMO, here are other ways to be a savvy shopper on Cyber Monday, which is the Monday after Thanksgiving. Also, check out more of the week's best money tips from experts.

Look for great discounts on Roomba, Dyson, Shark and other big vacuum brands.

Team of researchers studying how to turn trash into energy

Team of researchers studying how to turn trash into energy

Spilled Skittles on a country road put a focus on farmers using candy for animal feed, which dairy farmer and nutritionist Laura Daniels says is OK because it can aid digestion and provide energy.

Dairy cows enjoy the digestive benefits of eating gummy candy, but they don't appreciate the flavor because they swallow them whole, according to dairy nutritionist Laura Daniels.