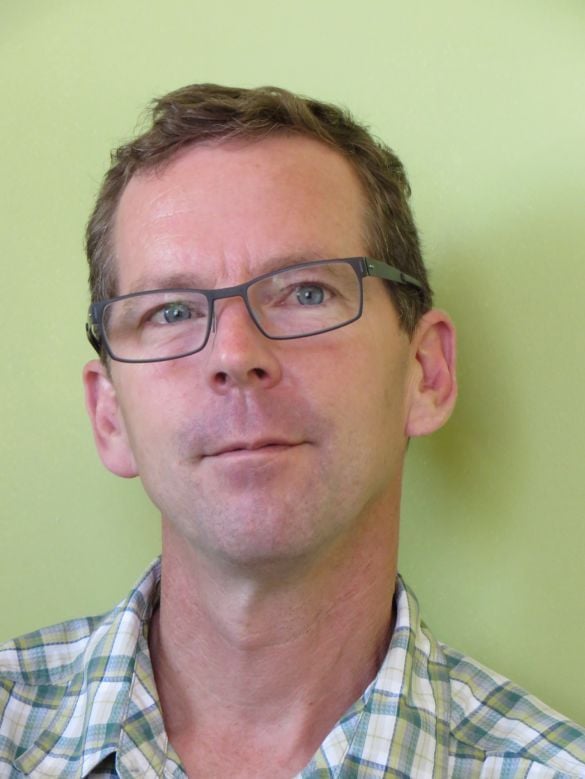 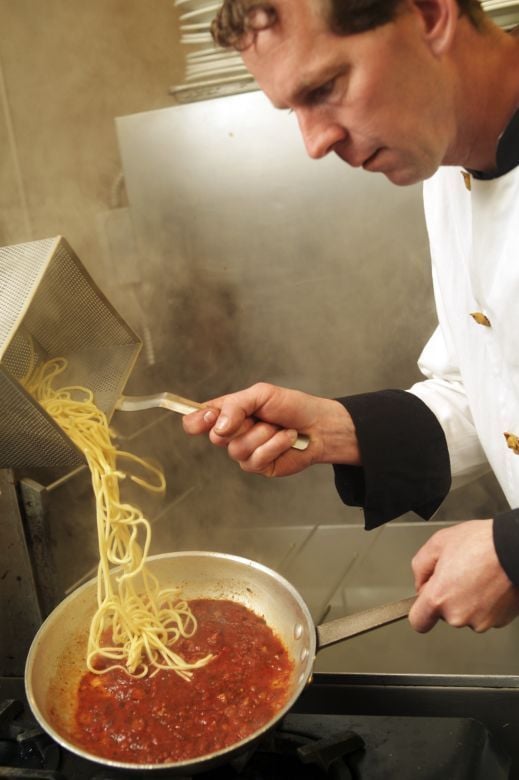 PATRICIA SIMMS For the State Journal

RP’s Pasta Company may have been born of serendipity — but Peter Robertson, CEO and founder of the fresh pasta company in downtown Madison, has made the most of good fortune.

After three years at Northeastern University in Boston studying mechanical engineering and theater design, Robertson toured the world with several well-known dance companies as a set carpenter and technician. Wanting to get off the road in 1993, he picked Madison as a new home and took a job with Electronic Theatre Controls (ETC) in Middleton.

An avowed foodie, he made fresh pasta to give as Christmas gifts to his friends and neighbors in 1994. “I decided I didn’t want to give out cookies or peanut brittle or something like that,” he says. “I wanted to give out something savory like a real food instead of sweets. So I made some fresh pasta and gave it out to my neighbors.”

One of those neighbors worked for an East Side restaurant, Pasta Per Tutti. “She suggested I show it to the owner over there. He said, ‘I’ll buy this from you if you’ll make it for me.’ I thought, ‘That’s a great idea.’ So I started doing my work.”

Today, RP’s Pasta is distributed throughout the United States and Canada, and sales of its fresh gluten-free pasta, in particular, are booming. Robertson ﻿hired a president, Rich Ciurczak, a retired businessman from Fort Atkinson, about five years ago to help grow the business.

“He is a wonderful gentleman with a lot of experience in business,” Robertson says. “He came on board. He was my right brain. It was the best thing that ever could have happened to me.”

Q: How long have you been in the food business?

Q: But you’ve been a foodie for a lot longer?

A: Food is my yoga. It’s my sanity. I could cook 24-7. I’m from Hershey, Pennsylvania. I started working at the Hershey Foods Corp. in 11th grade in its machine design group. Every Tuesday and Thursday, they would just bring boxes of chocolate into the offices. ﻿

Q: You studied engineering and theater design at Northeastern University in Boston, but you didn’t graduate?

A: After three years, I ended up getting an offer to go on a European tour. My university advisor said, “Just go. You’ll get way more experience on the road.” So I went. Hopped on a plane and flew to England with a very, very small troupe out of Boston. We drove all over Europe. That was my first tour. Those days were wonderful. I toured with Merce Cunningham and Martha Graham and the New York City Opera. Sound, lights, sets. Strictly backstage. As my mom put it, I had the life of Riley.

Q: That qualified you for opening a pasta company in Madison?

A: What qualified me for opening a pasta company in Madison is that we always had a season in Reggio Emilia, and how do you not fall in love with the best fresh pasta in the world?

Q: Why did you stop touring?

A: There’s only so many years you can live out of a suitcase. And my time came. I thought, “I’m done with the suitcase.” I moved here because of Electronic Theater Controls. I had actually chosen Madison as the place where I wanted to move to from New York City. I loved it here.

Q: How did the business grow?

Q: Then you started selling at a few local stores.

A: I thought, well, if I can sell to these two stores, I’ll call Phil Woodman and ask him if there was any chance I could sell some fresh pasta at his stores. He gave me someone to call at the East Side store, and she said, “Sure, bring it in.” The business grew very organically. I was a foodie, an artist, a creative guy. I understood the nuts and bolts of business, but, boy, did I learn a lot. It really took me the first 10 years to realize that you need a right brain and a left brain to run a business.

I started by renting some space on Monona Drive. I outgrew that space and moved into the Madison Sourdough space on Williamson Street. We were there for 10 years. It was a fast growth in the early years. Then, we moved to the space on Wilson Street and built that out to be a really nice food-processing facility. We never did any marketing. Never did any advertising. Our gluten-free pasta started in 2008. It’s an area that’s growing very fast. One day we got a call from Whole Foods’ Southern California region. We sent them samples. Next thing you know we are sending pallets of good fresh pasta to California.

Now we distribute from coast to coast in the United States and all across Canada. We are working on the potential of doing a large food group in Brazil. There are opportunities coming right and left. A lot of that is the gluten-free pasta. It’s a niche, but it’s a big niche. There are a lot of gluten-free products out there, but there’s not a lot of good gluten-free fresh pasta.

A: I would have to say there must be.

Brief description of business: RP’s Pasta Co. is a manufacturer of fine fresh and frozen pasta products. Products include traditional semolina long pasta (for example, fettuccine and linguini) and short pasta (for example, rigatoni and fusilli), filled pasta (tortelloni and ravioli), and gluten-free pasta. Products are distributed throughout the United States and Canada to grocers and restaurants.

Besides work as marketing chief for the Smith & Gesteland accounting firm, he's active at Edgewood College and promoting family businesses.

RP's Pasta and Yumbutter are part of a 3-way merger