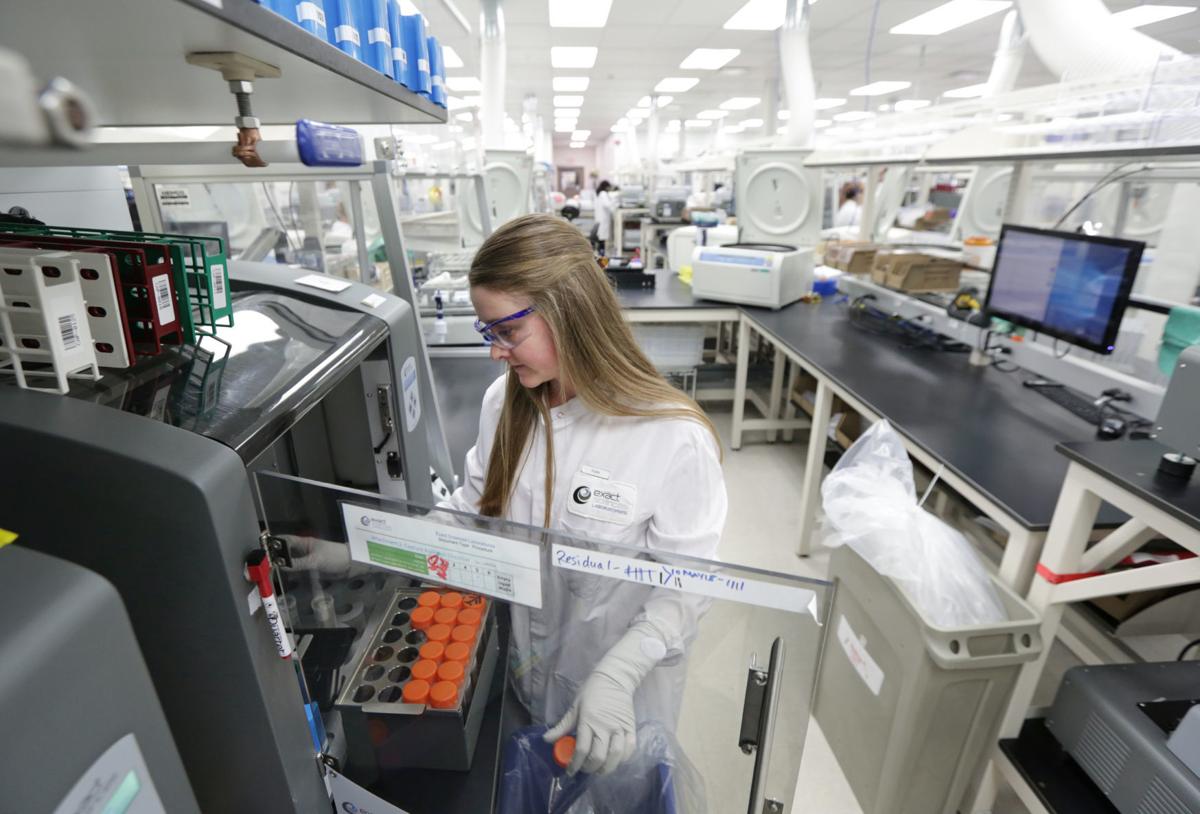 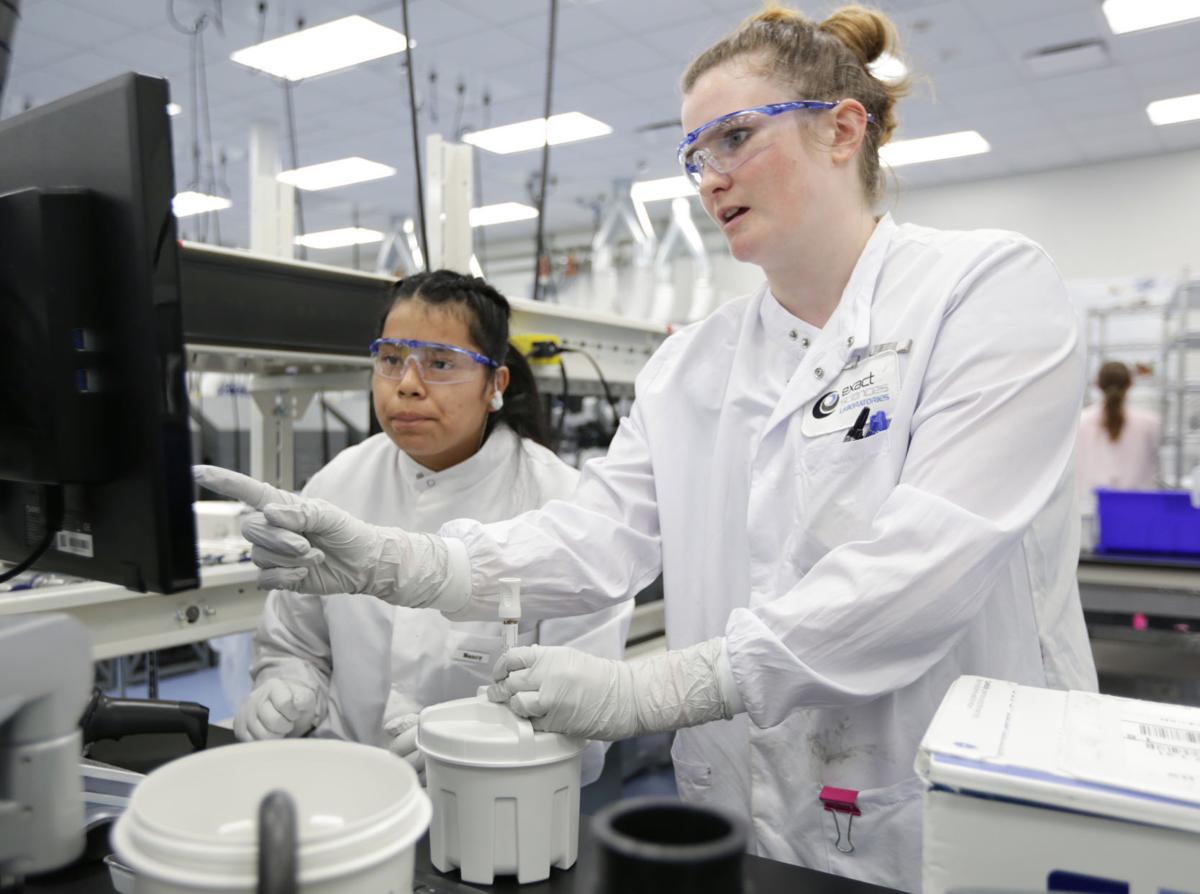 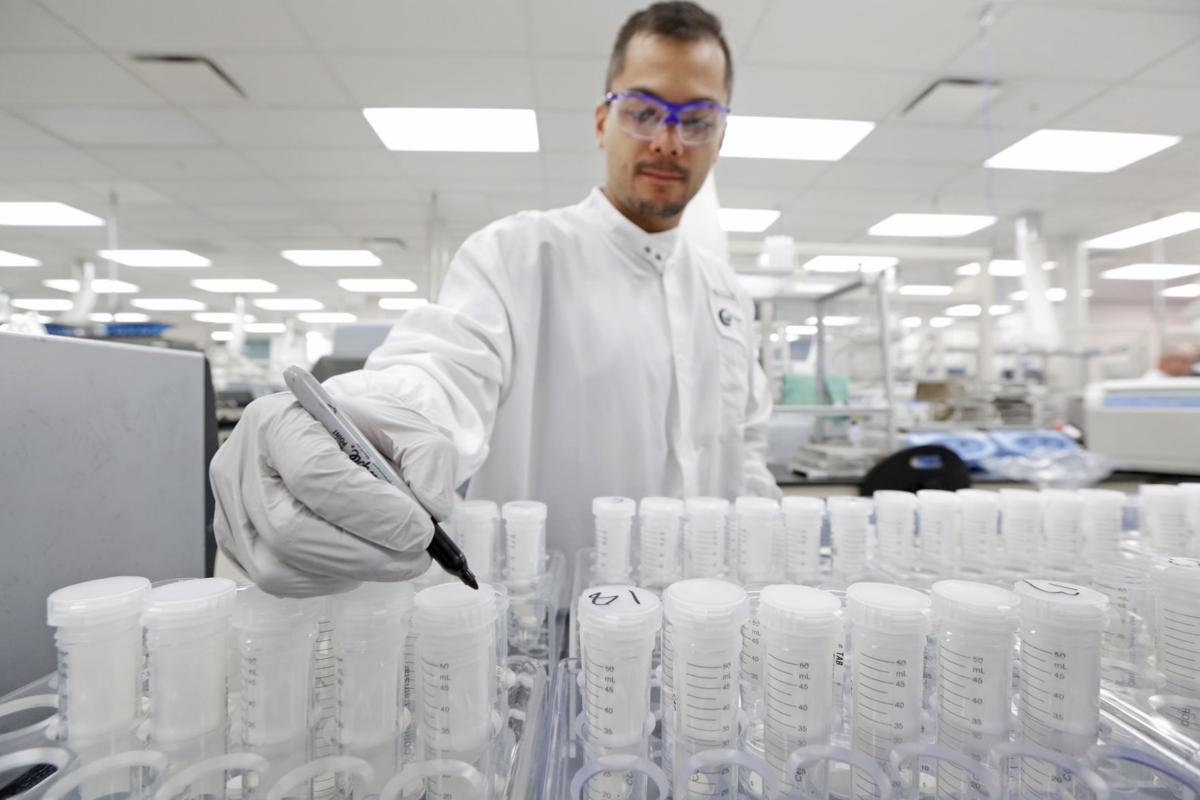 Lab scientist Bryan Robinson prepares samples for processing at Exact Sciences on Badger Road. The processing lab has been doubled in size, and Exact is building a second lab on Schroeder Road. 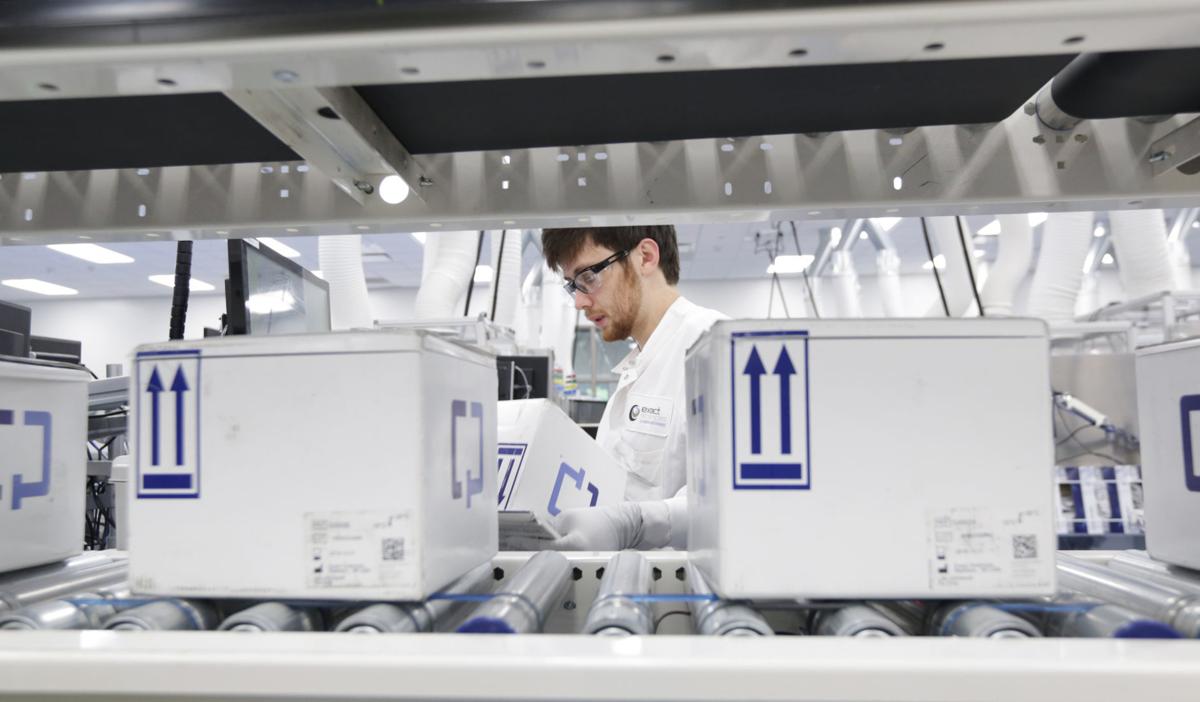 Exact Sciences Corp. and the Mayo Clinic say they’ve developed a blood test that correctly identified 95 percent of the cases of a common form of liver cancer.

The news, released Tuesday in a presentation at a major conference of gastroenterologists, is a signal that the liver cancer blood test could be the second product that Exact, of Madison, and Mayo, of Rochester, Minnesota, will seek to bring to market, following Cologuard, their stool-based test for colorectal cancer. The liver cancer blood test could be available in about three years if all goes well, Exact CEO Kevin Conroy said.

But it’s just the start.

Mayo clinic physician John Kisiel said Mayo and Exact are working on identifying biomarkers for the top 16 killer cancers. Their ultimate goal: Create two tests, each of which would screen for multiple types of cancer. A stool test would detect gastrointestinal cancers and a blood test could pinpoint many other forms of the disease, including liver and lung cancer.

Kisiel said it may be possible scientifically to create such a test within the next five years.

“Given a full-court press, (for) the development of a universal cancer screening test — I think the technology and biology are further along than most people might imagine,” said Kisiel, who also is an assistant professor of medicine at Mayo Clinic Medical School. “I think five years is realistic. But we’d like to see it sooner.”

In search of HCC

The blood test is aimed at finding hepatocellular carcinoma, or HCC, the most common cancer that starts in the liver. HCC is the second-highest cause of cancer death in the world, after lung cancer, according to the National Institutes of Health. Mayo Clinic experts predict that liver and bile duct cancers will be the third-biggest cause of cancer deaths in the U.S. by 2030, partly because of Americans’ increasing obesity.

People with cirrhosis are at the greatest risk of developing HCC and are recommended to be tested every six months. Kisiel said ultrasound can identify 45 percent of the cancers at a curable stage, and a combination of the ultrasound and the blood protein test found 63 percent of the HCC cases, according to a recent study.

In a study of 244 people, conducted over the past year, the test developed by Exact and Mayo detected 95 percent of the liver cancers overall — 93 percent of tumors at a curable stage, Kisiel said.

The results were disclosed at Digestive Disease Week, a worldwide conference being held in Washington, D.C.

Conroy said he was very pleased with the findings. “There’s just never been a blood-based, simple liver cancer test that performs anywhere close to this,” he said.

As with the Cologuard stool test, the liver cancer blood test searches for biomarkers of methylated DNA. They are chemical alterations to DNA that are found in cancers but not in healthy tissues, Mayo’s Kisiel said.

“It is very much a joint process,” he said.

This is the second study of the liver cancer blood test. Conroy said the next steps will be to study the markers to see if the performance can be improved, and then run a larger study. “We haven’t defined how large that will be yet,” he said.

Cologuard was tested in a study of 10,000 people; Conroy said he doesn’t expect the liver cancer test will involve more than a few thousand. That will be determined after conversations with the U.S. Food and Drug Administration, he said.

“We expect to be first with FDA approval for the test,” Conroy said.

Exact and Mayo also presented early results on a blood test for esophageal cancer at the gastroenterologists’ conference. The test detected about 75 percent of those cancers, with less than 10 percent false positives, Kisiel said. He said a phase two study on that test will begin soon.

In addition, Exact and Mayo reported on their first steps toward a combination product, disclosing data on new markers for a potential stool test that could detect both colon cancer and pancreatic cancer. Of 30 patients with colon cancer, 30 with pancreatic cancer and 30 without cancer, about 90 percent of the cancers were found, and they were about 90 percent correct in determining which cancer was which, Kisiel said.

“It provides very compelling evidence for the rationality of the multi-cancer test concept,” he said.

Kisiel said a blood test could also be structured to identify multiple types of cancer at once. But he said it could prove to be harder to gain regulatory approval since there’s no screening tool like that to use as an example.

“An idea this revolutionary faces challenges in terms of its acceptance. But we’re not daunted by that,” Kisiel said.

Cologuard, approved by the FDA in 2014, has been used by more than 1 million people, to date.

2018 year in review: Highs and lows of the past 12 months in the Madison area

The Madison company is collaborating with Mayo Clinic to develop cancer screening tests.

But a lawsuit filed by the city's private partner could affect the scope and timeline of the project.

The biotechnology company is looking to build a new 270,000-square-foot research and development facility at its Fitchburg campus.

The five-story building would be in University Research Park, on the West Side, where the cancer test company already occupies several buildings.

The problem was that Exact Sciences' results didn’t quite meet the expectations of financial analysts who follow the company.

Pfizer will invest more than $65 million through 2021, “adding serious firepower” to the Cologuard sales effort, one analyst wrote.

Exact Sciences launches studies to expand its attack on cancer

The Madison cancer diagnostics company is working to develop more products — in addition to Cologuard — that will scout out cancer cells.

Lab scientist Bryan Robinson prepares samples for processing at Exact Sciences on Badger Road. The processing lab has been doubled in size, and Exact is building a second lab on Schroeder Road. 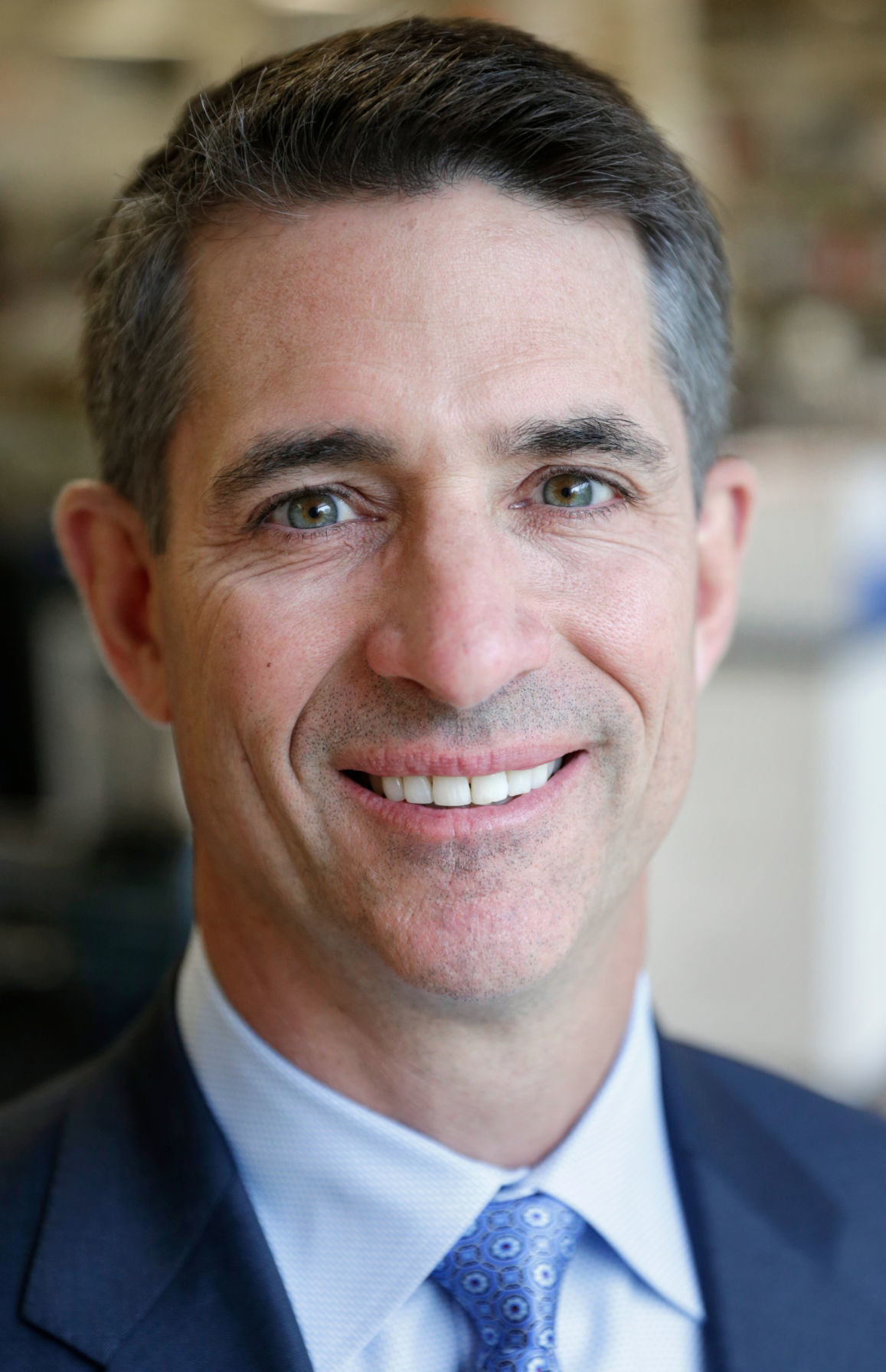 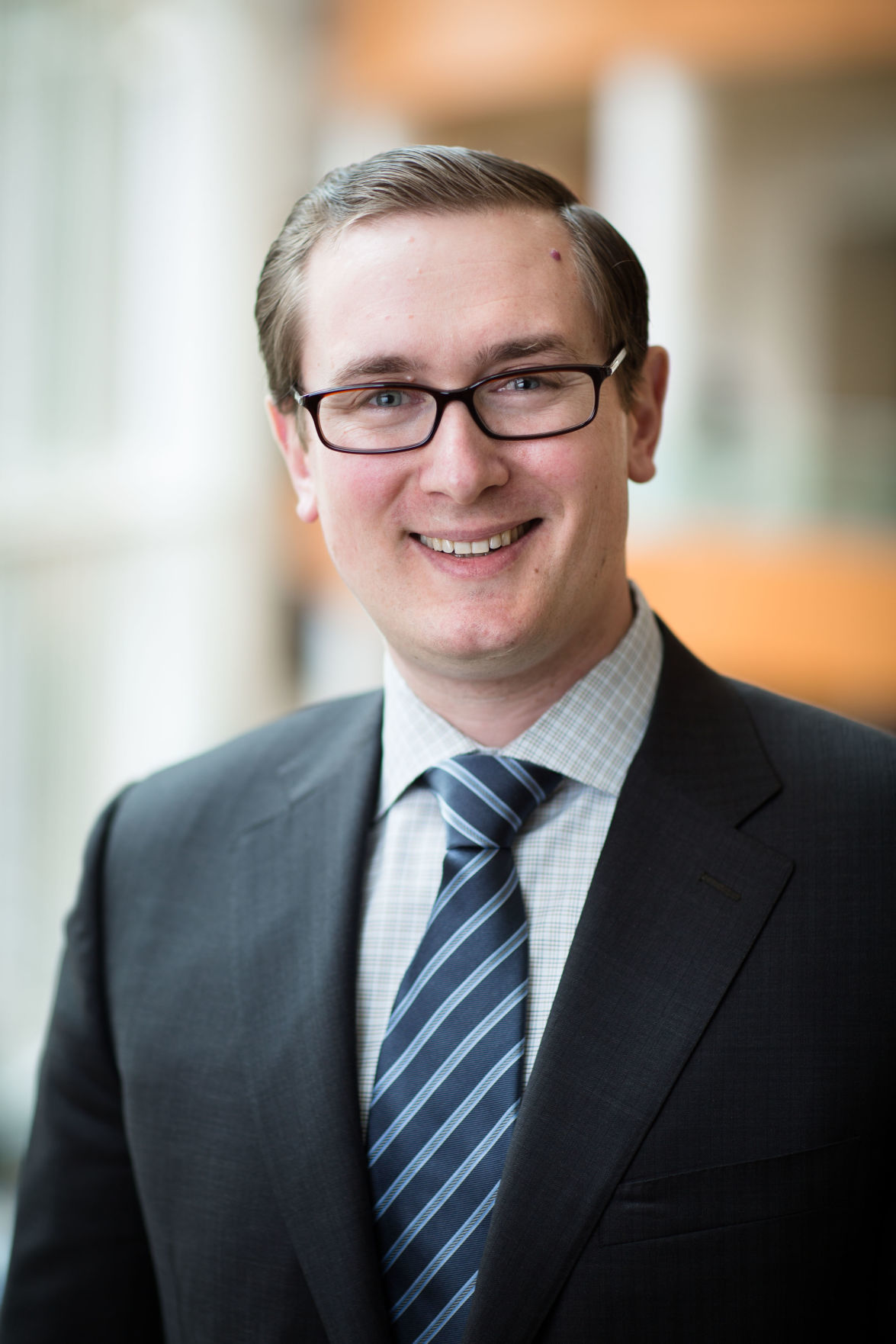