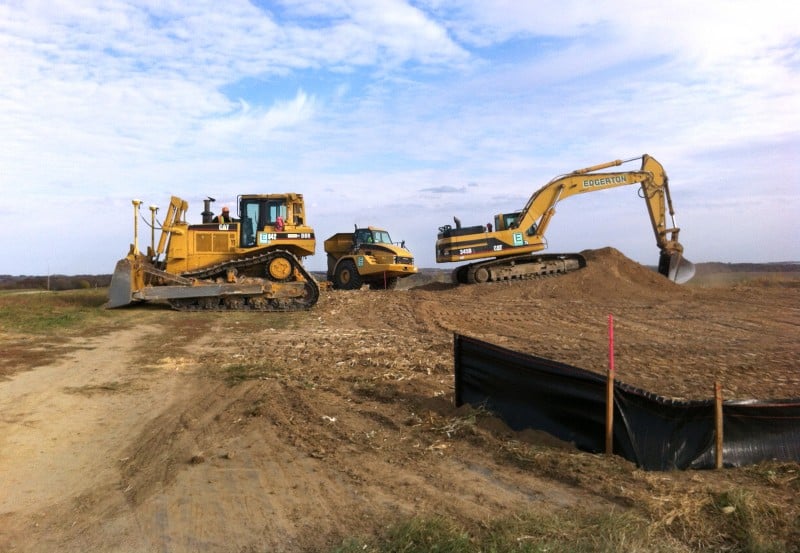 Heavy equipment prepares a pad Thursday along Kickaboo Road northwest of Madison where tons of materials are to be staged during construction of six wind turbines, Dane County's first commercial wind generation project. Epic Systems of Verona is building the 9.9 megawatt array to help offset its utility costs. 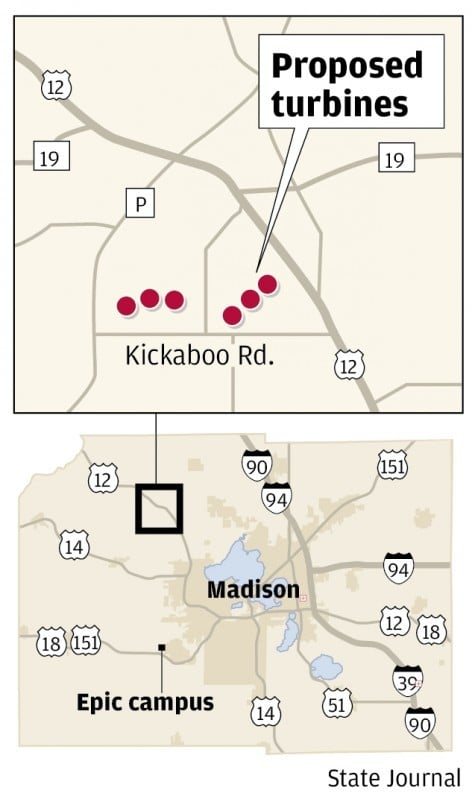 Dane County's first array of commercial wind turbines will rise hundreds of feet above the rolling hills along Highway 12 northwest of Madison under plans Epic Systems of Verona hatched over the last four weeks.

The plan had to move quickly so that Epic can take advantage of federal tax credits that expire Dec. 31, said Bruce Richards, the medical software manufacturer's director of facilities and engineering.

Six turbines — each with three 135-foot blades spinning atop a 262-foot tower — will be visible from the tall buildings in Downtown Madison, including the Capitol, and the electricity they generate will help Epic offset most of its energy needs on its sprawling Verona campus.

Several energy companies have tried and failed to build on the spot since 2007, but Epic's effort works because the company isn't trying to make a profit and doesn't need investors, Richards said Thursday.

"It's the amount of capital we have to get this off the ground," Richards said. "It's substantial."

Richards wouldn't discuss the cost of the project, but said the company expected electrical savings to pay for construction within seven years.

In 2007, the cost of a similar project was estimated at about $20 million by Freeport, Ill.-based Morse Group, which did initial feasibility studies, negotiated lease agreements with landowners and obtained several needed permits.

Morse sold the project to an investor, and it passed through the hands of at least two other companies before Epic purchased it a few weeks ago after concluding that it couldn't build more than three turbines on its land in Verona without risking interference with future construction buildings, Richards said.

A geothermal system heats and cools the Verona campus, and solar panels already generate electricity. The addition of the turbines will mean the company can provide about 85 percent of its own energy needs by 2014, Richards said.

"What sticks out to me is Epic's incredible commitment to renewable energy," said Dane County Executive Joe Parisi, whose administration has expedited permits for the company.

Morse Group president Lou Rotello said his company will serve as engineering, procurement and construction contractor on the project, which will employ about 75 construction workers.

The site is a good one in part because almost all of the homes that could be affected by noise or flickering shadows from the turbine blades are occupied by family members of the landowners who are leasing their land for the towers, Rotello said.

The ridge isn't the windiest spot in the county, but studies indicate it will be gusty enough to spin the blades at 27 percent of their full-speed capacity each year, Rotello said.

The turbines have a capacity of 9.9 megawatts, which will qualify them as one of 10 "major" wind power generators in Wisconsin, said Deborah Irwin, the state Public Service Commission's renewable energy specialist.

The largest is the 162-megawatt Glacier Hills Wind Park operated by We Energies in Columbia County. The smallest is the Lincoln Wind Energy Facility run by Wisconsin Public Service in Kewaunee County with 9 megawatts.

Epic plans to sell its wind-generated electricity to Madison Gas and Electric Co. to offset its utility costs. MGE spokesman Steve Kraus said the two companies haven't negotiated a contract. At least one previous effort to build turbines on the site failed because the developer wanted a higher rate than MGE would pay.

Richards said Epic has an alternative plan to send the electricity over existing transmission lines to its complex in Verona, although that would involve building an electrical substation and paying to use the lines.

State law leaves permitting of wind power facilities under 100 megawatts to local governments. Dane County approved a land use permit for the original project in 2008.

Some residents worry that the towers will lower property values, but studies haven't proved that will happen, said town of Springfield chairman Don Hoffman.

"Some people think it's great, some people don't want to look at them," Hoffman said. "To me it's a good reminder to people that we use a lot of power and it's got to come from somewhere."

Catching Up: New wind turbines not at full power yet

When the wind blows, at least some of the six towering new turbines northwest of Madison spin and generate power — but not much.

Heavy equipment prepares a pad Thursday along Kickaboo Road northwest of Madison where tons of materials are to be staged during construction of six wind turbines, Dane County's first commercial wind generation project. Epic Systems of Verona is building the 9.9 megawatt array to help offset its utility costs.