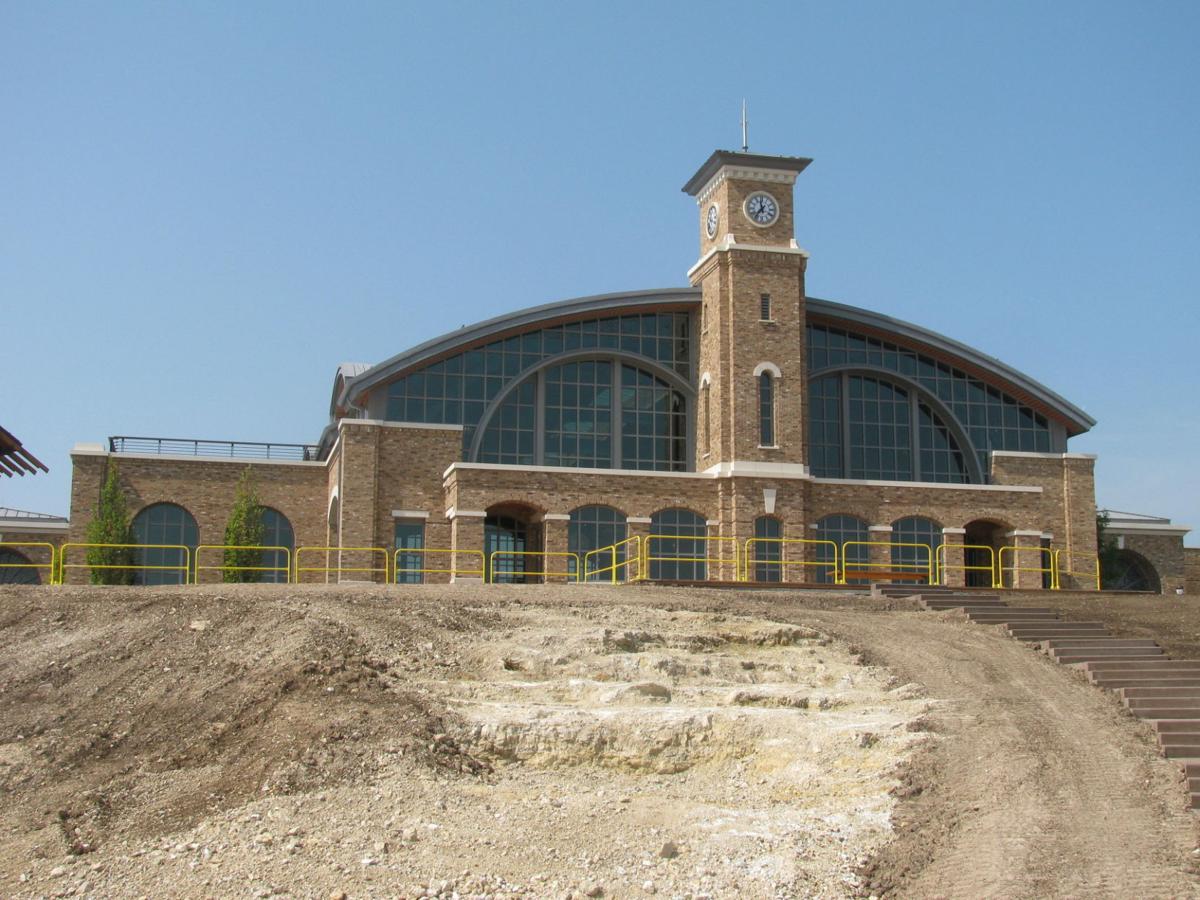 Epic’s Wizards Academy Campus, part of which is shown in this photo from September, is gradually being completed. The last of the five office buildings in Epic’s fourth campus is expected to open by June 2016. 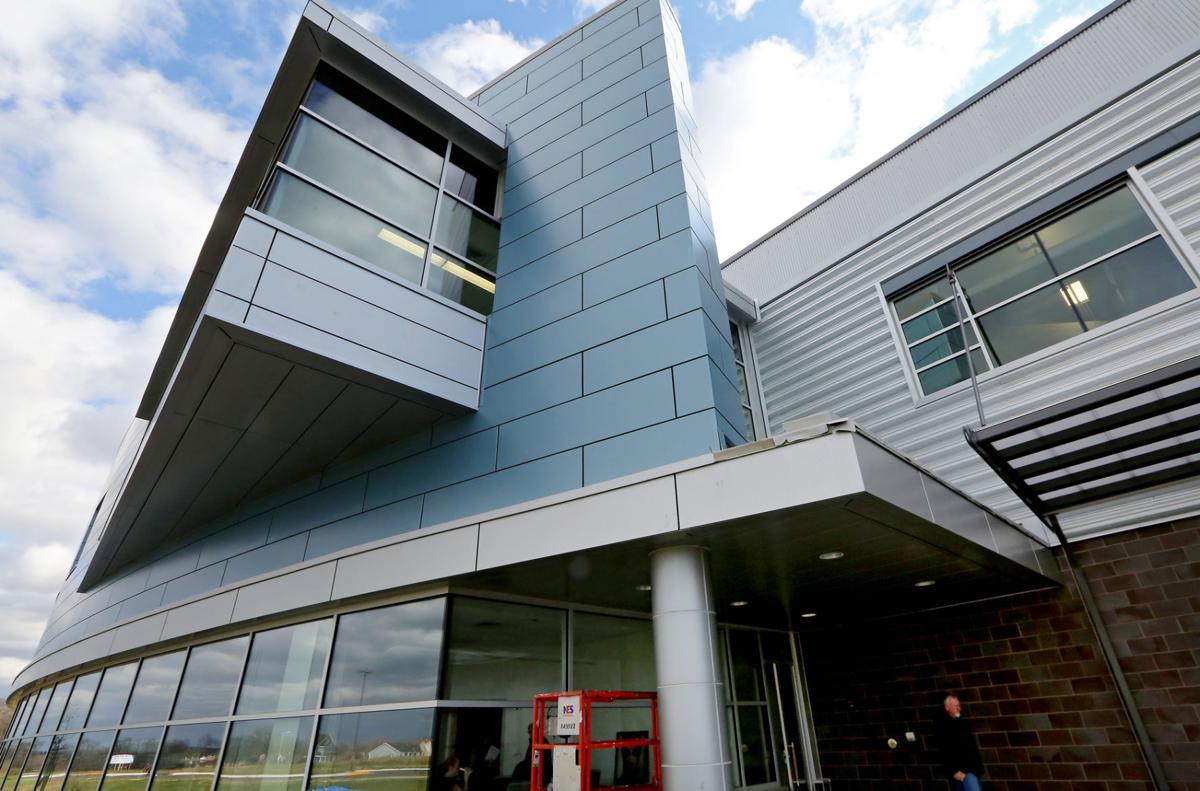 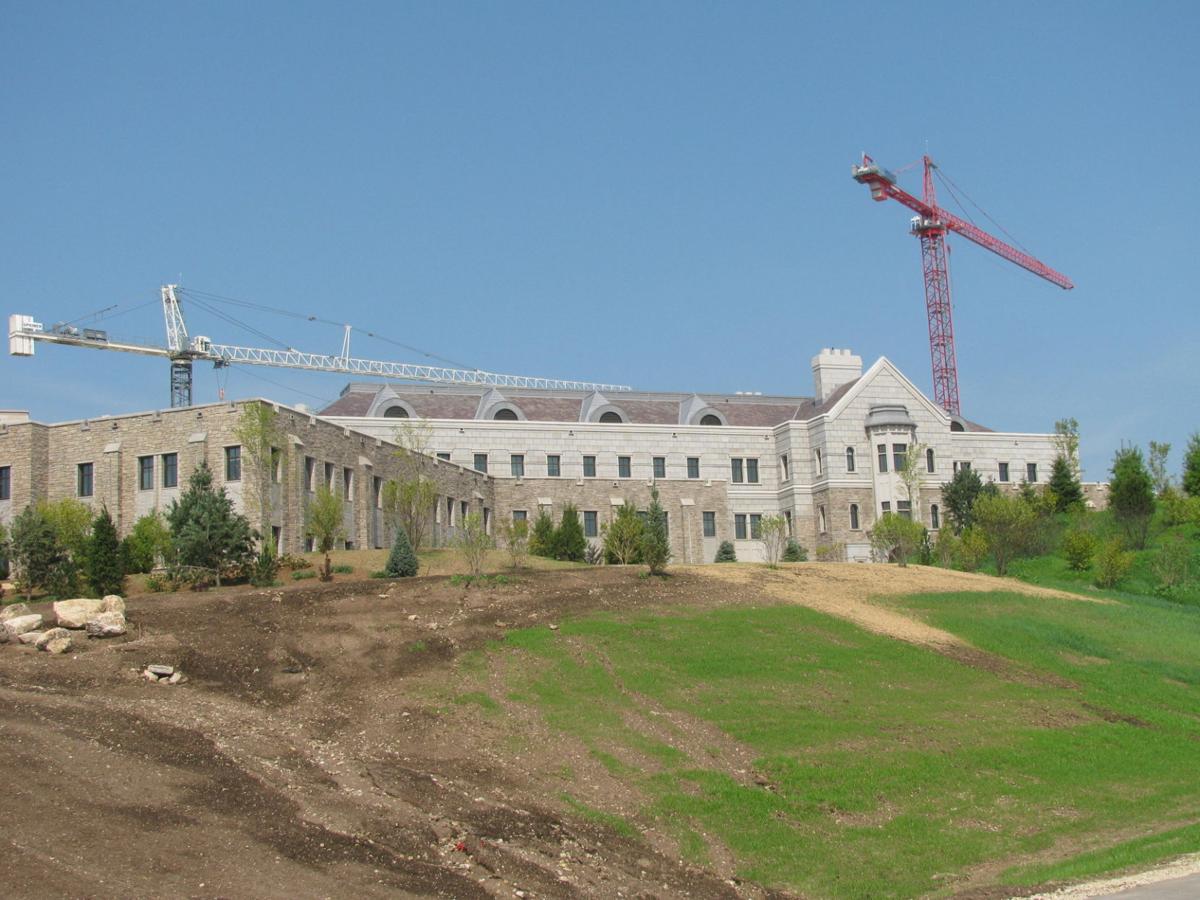 All five buildings of Epic Systems Corp.'s Wizards Academy Campus, part of which is shown in this photo from September, are expected to be completed by June 2016. 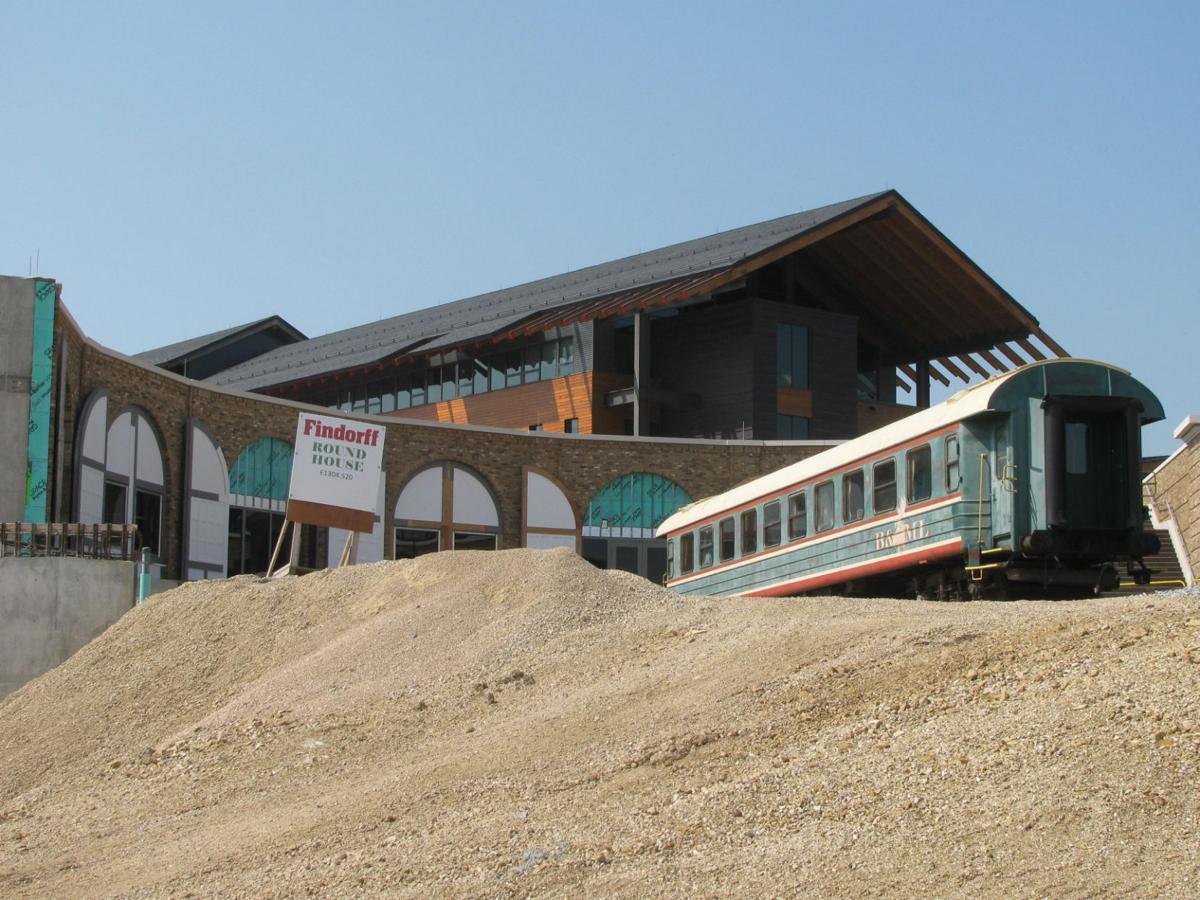 With one building looking like a budding train station, in this photo from September, Epic's fourth group of office buildings is due for completion by June. 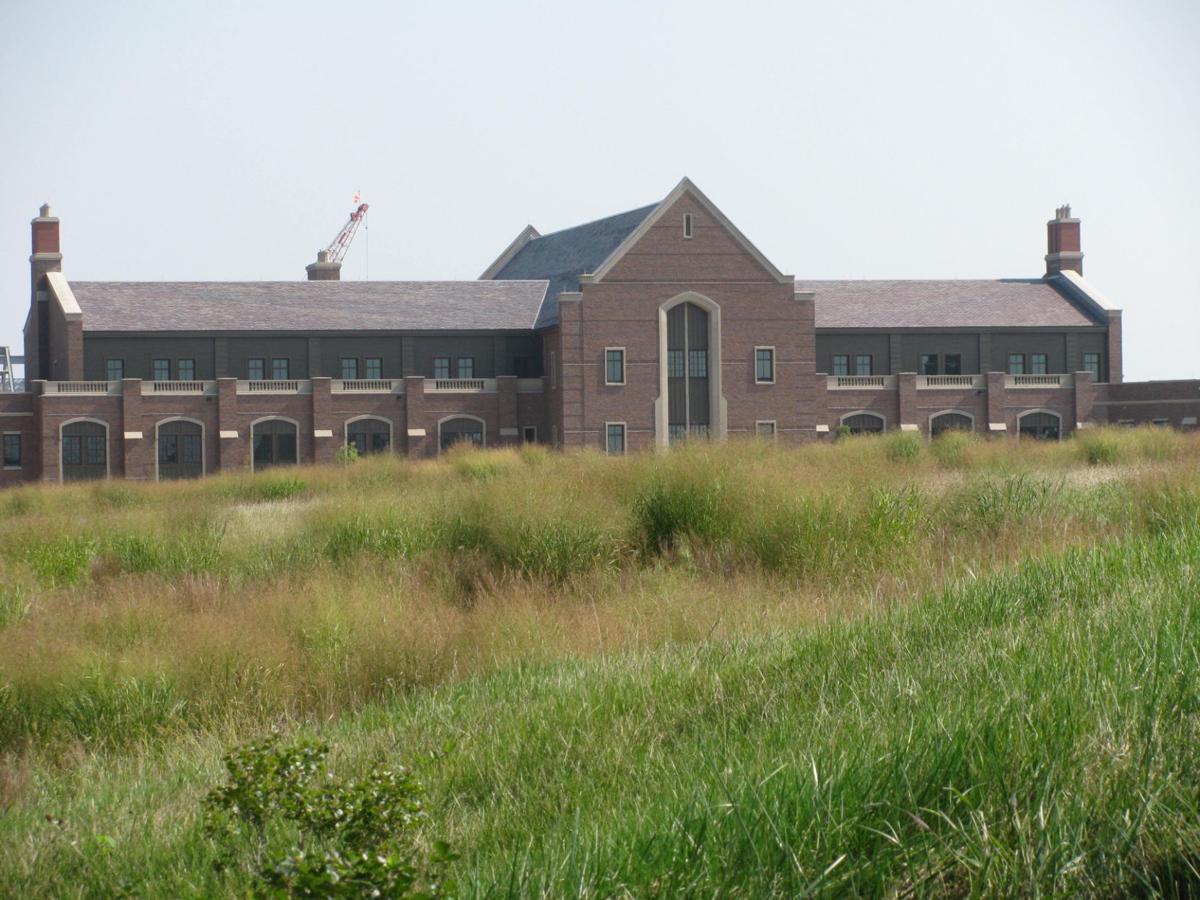 Epic, the sprawling electronic health records company in Verona, says it expects the Wizards Academy campus -- part of which is shown above in this photo from September -- will be completed by June. It will be the fourth set of office buildings for the privately owned company.

The Verona electronic health records company, founded in 1979, now has a workforce of 9,400, spokeswoman Dana Apfel said. That’s believed to be an increase of about 1,400 in the past year.

To house those employees, Epic is in the midst of building two more clusters of office buildings. Campus 4, the Wizards Academy Campus, has two buildings completed. Three more will open over the next six months, along with an underground parking ramp with more than 2,000 stalls, said Adam Sayre, planning and development director for the city of Verona.

Designed to resemble a historic academic center, like Oxford University in England or the fictional Hogwarts school from the “Harry Potter” series, the five buildings will add 1,580 offices to Epic’s Verona campus. A large cafeteria building, King’s Cross, already is open; it is Epic’s second full-sized cafeteria.

Meanwhile, construction of campus five also is underway, with a Storybook theme based on literary classics. Its five office buildings will provide another 1,600 offices and 1,500 parking spaces. The first building is expected to be completed in the first half of 2016 with two more to open later in the year.

Roads around Epic also are being upgraded. Nine Mound Road will be expanded to four lanes in 2016, a joint project by Epic and the city of Verona, Sayre said. “We just need a bigger road because of the traffic,” he said. That is: traffic of Epic employees coming and going.

Epic CEO and founder Judy Faulkner, 72, took steps in 2015 hinting at plans for her retirement from the privately owned company but did not say when she will retire. She told Modern Healthcare magazine, in a story published in March, that when she retires, she will leave most of her stock in the company in a charitable trust, tentatively called Epic Heritage Foundation.

In December, Faulkner and Epic set up an endowment to fund three faculty associate positions in the UW-Madison’s computer sciences department, where student enrollment has nearly doubled over the last five years.

Epic says its software is being used by — or being installed at — 360 health care organizations based in 10 countries, holding records of 180 million Americans, or 55 percent of the U.S. population, as well as 42 percent of the people in Denmark. The company has said it had $1.8 billion in revenues in 2014.

Promega Corp. in Fitchburg opened its newest building, the Kepler Center, in fall 2015, but it will be this spring before the 126,000-square-foot warehouse and distribution center is fully operating.

In the works for 2016 will be development of plans to expand several of Promega’s 18 branches in 2017 — in California, the United Kingdom, Germany and China.

Promega founder and CEO Bill Linton recently told staff, “We will continue to invest in the capability and capacity of the company for the long term.”

Beyond buildings, Promega’s leaders are looking forward to the introduction in late 2016 of the Spectrum CE System. Most of Promega’s 3,500 products are biological substances such as reagents used in research and drug discovery.

The Spectrum CE System is an instrument to be used for forensic analysis, by organizations such as crime labs, and for paternity identification.

“It’s a first for the company, and it breaks new ground in the forensic community,” spokeswoman Penny Patterson said.

Patterson said Promega also expects to have to ramp up production to meet demand for NanoBIT, or NanoLuc Binary Interaction Technology. A biological substance derived from a protein, NanoBIT was named one of the Top 10 innovations of the year by The Scientist magazine for its ability to monitor specific activities in a cell.

“The more scientists understand the interactions in a normal cell, the closer they get to understanding non-normal disease states and what triggers them,” Patterson said.

Behind the scenes, the company also continues to deal with an attempt by disgruntled shareholders to buy Promega shares and take over the company. The effort began last summer over what the shareholders said was their concern over the privately owned Promega’s future.

Exact Sciences pushes on Exact Sciences is working on several fronts in 2016: Expanding orders for its Cologuard test to screen for colorectal cancer; getting a building constructed to hold an expected surge in employees; and convincing a federal panel to upgrade its recommendation for use of Cologuard.

The Madison company dealt with a series of ups and downs in 2015, the first full year Cologuard was available to the public.

In late 2014, after federal regulators approved the use of Cologuard and Medicare said it would reimburse most of the cost, Exact was charged with getting the word out about its novel, noninvasive, DNA-based stool test.

“We are very optimistic about the year ahead and the number of tests that we (expect) to be completed,” Fielder said. “We understand patients want this test and physicians continue to order this.”

Exact had planned to anchor a huge Downtown development, the $200 million Judge Doyle Square project, that would have involved a public investment of $46.7 million, or nearly one-fourth of the total price tag. Exact was promising to bring 400 jobs Downtown.

Then an advisory panel, the U.S. Preventive Services Task Force, came out with a preliminary report in October listing Cologuard as an “alternative” choice for colon cancer screening, not one of the primary options. Exact stock plunged nearly 50 percent and opponents of the development raised an even more skeptical eye.

Exact pulled out of the Judge Doyle Square project saying it will build an addition onto one of its buildings at University Research Park instead. A timetable is not yet available.

Exact and its supporters have appealed to the task force to raise its recommendation. A final report by the panel is not expected until “late 2016,” Fielder said.

In the meantime, the company continues to ramp up. Exact now has more than 700 employees, with 450 at its headquarters in University Research Park and labs in the town of Madison. The company hired 275 employees in 2015, Fielder said.

He would not project how much the staff will grow in 2016 but said about 50 positions in Madison are open now.

Use for Oscar Mayer property up in the air What’s known about Madison’s Oscar Mayer plant closure is that a year from now, it is expected to close, ending a nearly 100-year run in Madison and eliminating 1,000 jobs from the local maket.

That process was put in place Nov. 4 when Kraft Heinz announced the Madison plant would close, with Oscar Mayer’s headquarters moving to the Chicago area and manufacturing jobs to other Kraft Heinz facilities in Iowa and Missouri.

What isn’t known is what will happen with the property on Madison’s North Side.

Kraft Heinz spokesman Michael Mullen said in a Dec. 22 email that the property is expected to be put on the market the first quarter of 2016.

The company, which was formed as the result of a 2015 merger that was made final in early July, has had luck in the past selling large manufacturing plants that it closed while streamlining its business.

For example, California-based Ruiz bought a former H.J. Heinz plant in Florence, South Carolina. After the facility is retooled and a distribution center is added, it is expected to employ more than 500. Heinz employed 200 there.

And, in Pocatello, Idaho, Amy’s Kitchen bought a former Heinz property and currently employs 175 there with plans for 1,000 in 15 years. Heinz previously employed 401 there.

MadREP President Paul Jadin said his agency and several of its partners have met with Kraft Heinz regarding the property. “Our next step will be based on direction from (Mayor Paul Soglin’s) office regarding overall plans for the district. That will likely occur in January,” he said in an email exchange this week.

Bob Van Enkenvoort of the State Journal contributed to this report.

[Editor's note: This story has been updated to reflect a correction. The original slightly misstated the number of Cologuard tests Exact Sciences expects to have completed by the end of 2015 and projects to complete in 2016.]

A look ahead at the area grocery and retail business sectors.

Regional leaders look to public to help plan for the future

A Greater Madison Vision is developing a plan for how the region should address an expected population growth in the coming decades.

Epic CEO Faulkner No. 22 in top 100 list of most influential in healthcare

Judith Faulkner, founder and CEO of Verona-based Epic Systems Corp., is No. 22 on Modern Healthcare’s list of the most influential people in h…

Epic was not one of the bidders for the $33 million contract with the Department of Health Services.

Epic’s Wizards Academy Campus, part of which is shown in this photo from September, is gradually being completed. The last of the five office buildings in Epic’s fourth campus is expected to open by June 2016.

All five buildings of Epic Systems Corp.'s Wizards Academy Campus, part of which is shown in this photo from September, are expected to be completed by June 2016.

With one building looking like a budding train station, in this photo from September, Epic's fourth group of office buildings is due for completion by June.

Epic, the sprawling electronic health records company in Verona, says it expects the Wizards Academy campus -- part of which is shown above in this photo from September -- will be completed by June. It will be the fourth set of office buildings for the privately owned company.