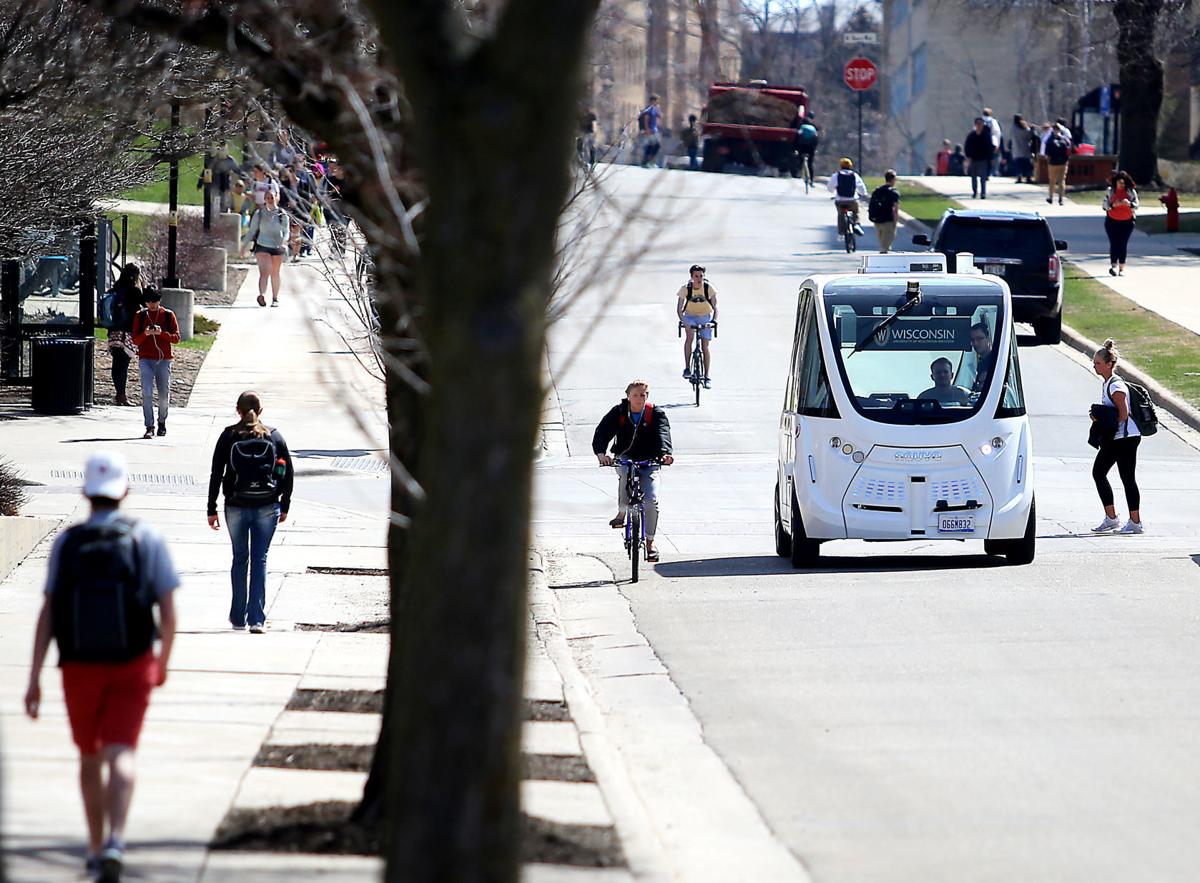 A small, electric shuttle bus -- without a human driver steering its path -- could be wending its way up East Washington Avenue next fall in a demonstration project under consideration by the city, UW-Madison and American Family Insurance Group. A similar driverless vehicle, shown above, was tested on the UW campus last spring. 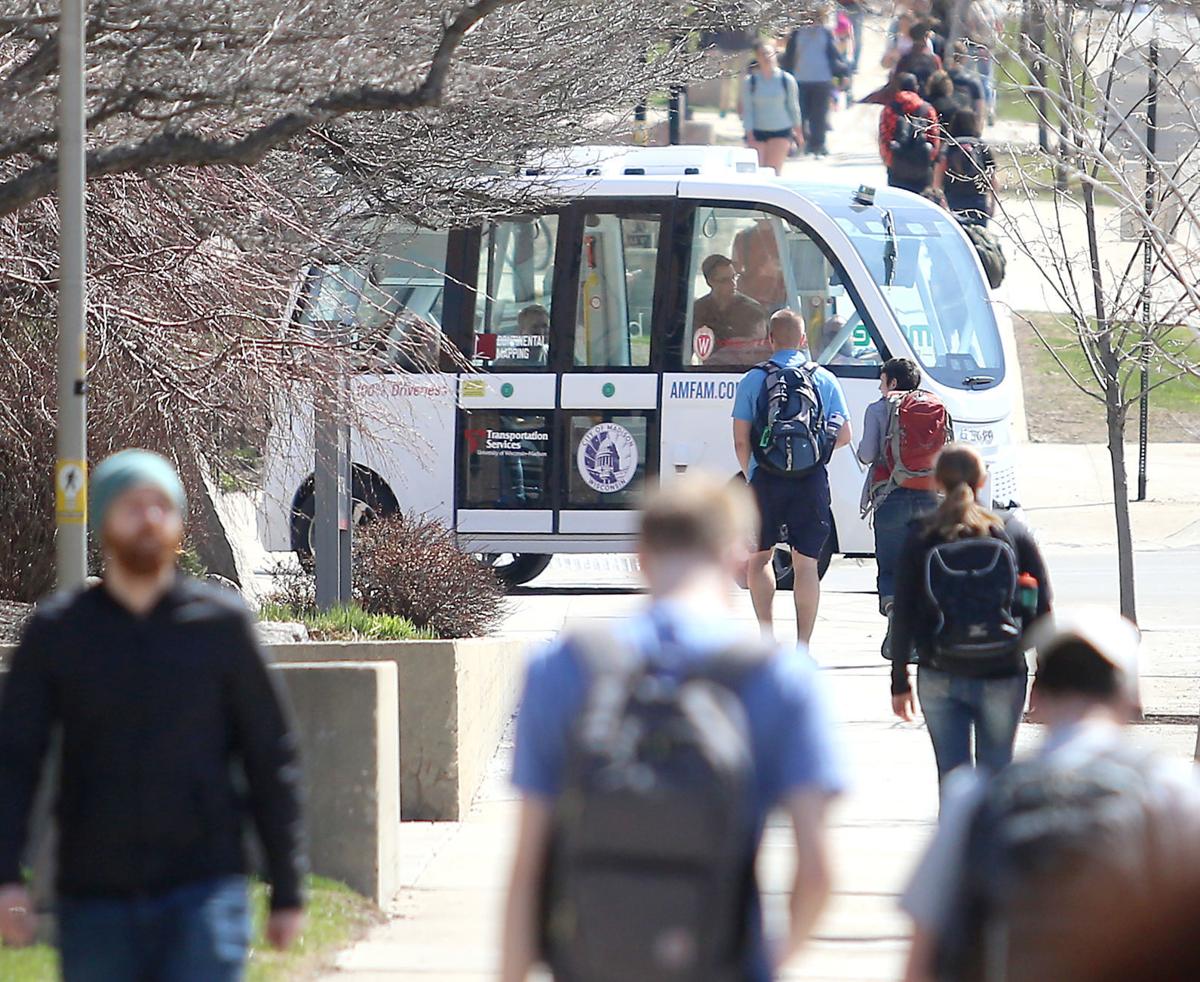 A driverless shuttle heads toward Linden Drive on the UW-Madison campus last April in a two-day experiment. Now, the UW, the city and American Family Insurance are collaborating on what they hope will be regular shuttle service Downtown using a similar type of autonomous vehicle.

There may be a new way to get from the Near East Side to the Capitol Square this fall: Via a small shuttle bus guided by artificial intelligence software instead of a human.

A driverless shuttle demonstration project is in the works for Madison’s central city.

It calls for a 15-passenger, automated, electric bus to cart passengers a short distance, and to track how well the system works.

The most likely route will run from the Spark building, at 821 E. Washington Ave., to the state Capitol. The length of the stretch — about one mile — is considered optimum for this type of test, said Jon Riehl, transportation systems engineer for the UW-Madison’s Traffic Operations and Safety (TOPS) Laboratory, which is heading the effort.

It’s also an increasingly popular neighborhood where several upscale apartment buildings, stores and restaurants, and a big entertainment venue have sprouted over the past few years.

“That district is growing and already has parking issues,” Riehl said.

“The real objective is to reduce the number of vehicle trips” and ease traffic congestion, Soglin said.

The city and UW-Madison have been key participants in the quest to make autonomous vehicles part of the transportation system. In early 2017, the U.S. Department of Transportation chose UW to be one of 10 automated vehicle proving grounds in the U.S.

As part of that, radio units have been installed on several traffic lights at North Park Street and University Avenue to see if they can communicate with two driver-operated Ford pickups — one owned by the city and one by UW — to transmit warnings about oncoming vehicles or pedestrians, for example.

The idea gained steam last April, when a 15-passenger shuttle bus made by the French company Navya carried a total of 750 passengers on test rides around the UW campus over a two-day period.

While most comments from the riders were favorable, a couple of glitches came to light, Riehl said, such as the shuttle’s abrupt stops for obstacles — “like what would happen when you slam the brakes on your vehicle.”

But the safety of others on the road was not compromised, he said. “The vehicle never had a problem sensing pedestrians, bicycles or other vehicles. There was even a bicyclist who circled the vehicle and the vehicle was able to handle that,” Riehl said.

The next phase will be to bring on a shuttle for a longer term — perhaps as long as two years — and see how it operates in normal traffic, he said.

American Family has agreed to pay for a shuttle, at a cost of around $300,000, Riehl said. It will take another $50,000 to $100,000 to run the demonstration project for the first year. Grants or corporate contributions could help cover those costs.

There will be no cost to the city or taxpayers, Riehl said.

“The data we get will enable us to understand and learn about rapidly changing trends that impact mobility,” Wagener said. “The more involved American Family is in shaping the future, the greater the insights we’ll have into driving our business and our products.”

It will take several months to get the project off the ground, UW’s Riehl said. Shuttle companies will be asked to submit bids to provide the vehicle. “We hope to get it here by fall of this year,” he said. Test runs will be held at MGA Research Corp. in Burlington.

With the death of a pedestrian struck by an Uber-operated autonomous car last March in Arizona, safety will be paramount, Riehl said.

“We really think these technologies need more research and deployment studies” to collect data and test their limits before they become mainstream, he said.

If the Spark-to-the-Capitol route is chosen, the shuttle will likely travel along East Main Street instead of East Washington Avenue so they don’t hamper traffic flow, Riehl said.

“These shuttles normally go from 25 to 28 miles per hour, maximum speed, and oftentimes they’re driving slower than that,” he said.

At the start, trips probably will be limited to special events, such as the Dane County Farmers’ Market around the Capitol Square, he said, and will likely avoid snowy or icy conditions.

The shuttle will be free to passengers — at least until regular service routes are established, he said, and each trip will have a human driver at the wheel as backup, and to answer passengers’ questions.

The autonomous shuttle will need a waiver from the federal government to run on city streets, but there are no state or city rules barring the vehicle, so it will not need City Council approval, Madison traffic engineer Yang Tao said.

“I think there are lots of opportunities for this kind of service,” said Tao. A major event at Breese Stevens Field, at 917 E. Mifflin St., could make it easier to park at Downtown ramps, for instance.

Tao said the shuttle could reduce air pollution from cars and offer more options for people with disabilities or those who cannot drive to get around. “I think we should be open-minded ... to learn how this can benefit us,” Tao said.

If all goes well over the next year or two, other routes probably will be tested before any regular service begins, Riehl said. He said project participants will apply for a three-year grant from the U.S. Department of Transportation to experiment with the technology.

The university was planning to again offer free rides to the public Wednesday from 9 a.m. to 3 p.m.

While such technology won't be taking to the streets tomorrow, it may be closer than some people think.

Don Lemon gives Carl Nassib a round of applause

CNN legal analyst: Weisselberg ought to be lawyering up

CNN legal analyst: Weisselberg ought to be lawyering up

A small, electric shuttle bus -- without a human driver steering its path -- could be wending its way up East Washington Avenue next fall in a demonstration project under consideration by the city, UW-Madison and American Family Insurance Group. A similar driverless vehicle, shown above, was tested on the UW campus last spring.

A driverless shuttle heads toward Linden Drive on the UW-Madison campus last April in a two-day experiment. Now, the UW, the city and American Family Insurance are collaborating on what they hope will be regular shuttle service Downtown using a similar type of autonomous vehicle.