Coworking gains steam in Madison
Share this
{{featured_button_text}}
1 of 4 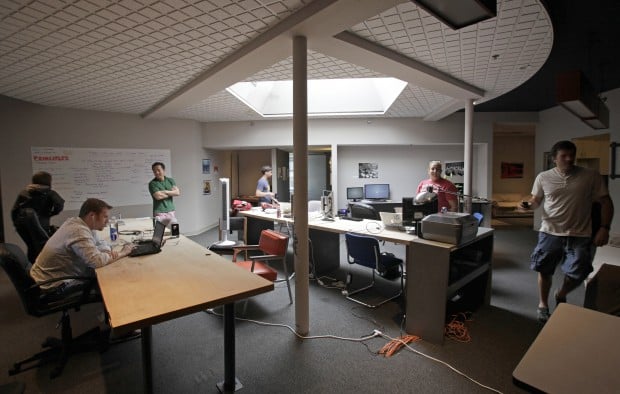 Members of 100State, a coworking space overlooking the State Capitol at 100 State St., mill around the "skyroom," a skylit, shared work area. 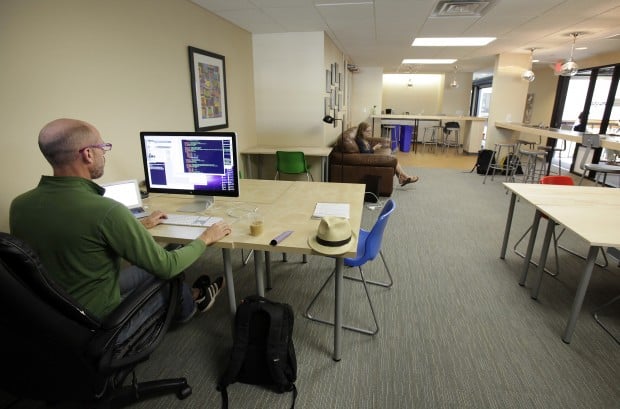 Software entrepreneur Philip Crawford works at Horizon Coworking, 7 N. Pinckney St., one of several coworking places that have opened or expanded in Madison this year. 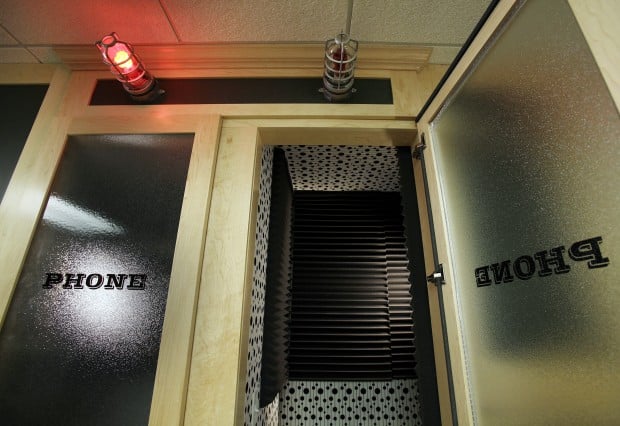 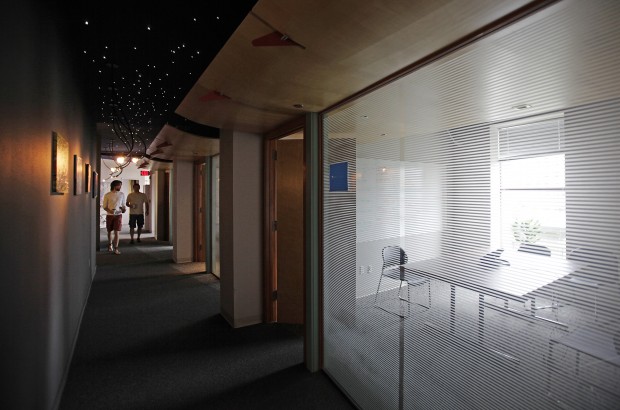 100State, one of Madison's new coworking spaces features twinkling lights in the hallway ceiling, like a starry night, while the day's sunlight pours into shared conference rooms.

out and work at a laptop, where do young techies in Madison go?

More and more often, to a co-working space.

“It got a little lonely at home. I figured I’d come and check one of these spots out,” said Mike Gannon, who works remotely for a New Jersey company and was recently trying out Horizon Coworking, 7 N. Pinckney St., on the Capitol Square.

Co-working spaces are office environments where people who don’t generally work for the same company sign up to share space at a long table or a designated desk.

Most likely, a smattering of amenities is available, such as kitchen facilities, meeting rooms, and, of course, the ubiquitous coffee pot.

“The advantages of working out of your home office have worn thin,” said Preston Austin, Horizon’s co-founder. “People don’t get up and move around; they are not creating new contacts.”

In Madison, several co-working spaces have opened, relocated, expanded or are about to open this year:

Co-working also is an option at Bendyworks, 106 E. Doty St., and it continues to grow at Sector67, a “maker space” where participants can be designing computer code in one room and creating prototypes on a 3D printer or tinkering with a car engine in the next room.

The format for co-working can vary quite a bit, from a nonprofit charging a nominal fee to a business accelerator that provides training, mentors and startup funding, said Jon Eckhardt, co-founder of the Madison and Milwaukee-based gener8tor business accelerator and executive director of the UW-Madison School of Business Weinert Center for Entrepreneurship.

“People have re-conceptualized what a (business) incubator might look like,” Eckhardt said. “There’s a certain energy in an accelerator. People have tried to recreate that energy, sometimes without the accelerator itself.”

A larger phenomenon driving co-working is the instability of the labor market, Austin said.

traditional employment as reliable; others seek higher risk, he said.

Horizon and Murfie moved across the street, from 1 S. Pinckney St., in early 2013, giving them about four times more space. The renovated building, built in 1899 as a men’s clothing store, features brick interior walls, wooden beams and a center skylight, with a look that could be described as casually upscale.

Horizon’s side of the fourth floor includes a kitchenette, a couch, long tables and assorted seats. Membership costs $45 a month. A separate room houses desk space that can be reserved at $200 a month. There are also two phone booths — without phones — but lined with sound-deadening insulation so members can conduct phone or video conference calls, Austin said.

“We’ve tried to create a lot of different ways that people can get out of each others’ hair,” he said.

“You don’t come here for latte. But you can have a meeting where you don’t have a coffee grinder in the background,” Austin said.

There’s also room for private discussions about confidential business issues, such as the two conference rooms that Horizon and Murfie share.

Freelance writer Josh Wimmer said writing at home, standing in his apartment kitchen, probably was a reason for the “low-level depression” he felt.

A friend recommended Horizon and Wimmer said the co-working space opened his mind to new options, like the simple act of going to lunch with friends. “It just seemed like it fit,” he said.

it of others’ ideas

100State opened in June on the fourth floor of the building that formerly housed the Madison Children’s Museum and now features Ian’s Pizza on the first floor.

100State is devoted to co-working “and a lot more,” said Michael Fenchel, who started the nonprofit with Nikolai Skievaski. It is an expansion of Caboose Coworking, the previous, cramped space they occupied in a train car at the West Washington Avenue railroad depot.

BlueTree has 12 employees in Madison and 20 consultants on-site with client companies, but co-founder and chief executive Reggie Luedtke said he was working out of his home.

“I got more done in one week here than in one month at home,” Luedtke said. “It’s interesting to see other projects, and people bouncing ideas off each other. It’s hard to be an expert in everything.”

With membership ranging from $50 to $200 a month, 100State has a drop-dead view of the state Capitol. Hallway ceilings are studded with tiny, twinkling lights. The lobby houses keyboards and a drum set, used for Tuesday night jam sessions. “Almost everyone here has ridiculous, hidden musical talent,” said Fenchel.

The co-working space has two long tables and assorted work areas, including rooms that can be reserved for meetings. Members have to apply to join. “We accept people who are following their passion, who are interested in being part of a cooperative community and doing something to help Madison,” said Fenchel, executive director.

At 100State’s opening night, June 7, around 200 attendees brainstormed about Madison’s problems and how to fix them.

Jessica Bahr joined after meeting Skievaski at a social media event. “I knew it would be beneficial just to be around them,” she said.

A UW-Platteville student, Bahr is co-founder of Undergrad Success, whose goal is to help college students prepare for career opportunities before they graduate. Its website launched in February.

Also working there on a recent weekday was Nathan DauSchmidt, an analyst for a Chicago company and director of U.S. operations for ParkMan, a Helsinki, Finland company. Co-working provides “face-to-face interaction that you don’t get over a computer,” he said.

DauSchmidt moved to 100State from another local co-working space. “This one, so far, has the most energy, more buzz to it,” he said.

Another attraction may be member Sarah Woolworth’s startup, Wisconsin from Scratch. Woolworth wants to teach cooking classes and, using 100State’s kitchenette, has been plying members with tasty morsels.

Cresa Madison, a commercial real estate firm that represents tenants, opened a co-working space in the Machinery Row building on the Near East Side on July 1.

With seven work stations, Nextt has claimed one. The up-and-coming startup, co-founded by Madison serial entrepreneur Mark McGuire, describes itself as a “private social network for friends to connect online so they can do more together offline.” Nextt recently raised $700,000 in seed funds.

“We spend an awful lot of time helping startup companies understand the mechanics of finding space,” said Tim Rikkers, managing principal for Cresa Madison. “We had so many folks that needed that kind of space that we said, ‘Hey, look, let’s help these companies grow.’”

Cresa leases the space, furnishes offices and provides wireless Internet, charging occupants $300 a month per person. Rikkers said he expects the tenants to come to Cresa for business advice, too.

“We’re not operating to make a profit,” Rikkers said. “For us, it’s a break-even proposition as a benefit to our current and future clients, and to raise the bar in Madison.”

Madworks Coworking opened in June 2012 in Middleton, but it will be moving to Madison’s West Side in August, to the MGE Innovation Center, 505 S. Rosa Road, in a partnership with University Research Park, which has helped nurture biotech and tech companies for nearly 30 years.

There will be room for more than 30 people, with a kitchenette and a lounge, said research park associate director Greg Hyer.

“The ever-growing startup scene in Madison has proven a need for co-working space like this,” he said. “We believe URP and Madworks will create a perfect environment for a new generation of entrepreneurs.”

Hyer said it will be the area’s largest office space for individuals and emerging businesses. Student lawyers at the UW’s Law & Entrepreneurship Clinic will be available for business law services, and Merlin Mentors, a business mentorship group, is also expected to provide assistance.

One Million Cups aims to help entrepreneurs network and collaborate.

And PerBlue adds an executive from Glu, a major, mobile game development company.

Madison coworking comes in many shapes and sizes

The growing trend is for more than just young tech entrepreneurs.

Bluetree moves to bigger offices on the Far West Side.

Members of 100State, a coworking space overlooking the State Capitol at 100 State St., mill around the "skyroom," a skylit, shared work area.

Software entrepreneur Philip Crawford works at Horizon Coworking, 7 N. Pinckney St., one of several coworking places that have opened or expanded in Madison this year.

100State, one of Madison's new coworking spaces features twinkling lights in the hallway ceiling, like a starry night, while the day's sunlight pours into shared conference rooms.