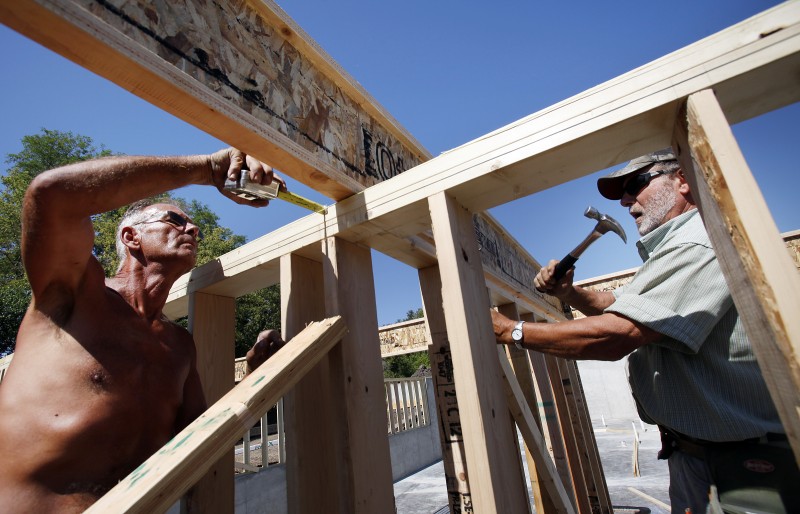 Subcontractors Tony Krebs, left, and Greg Freidel work on a home being built on Smithland Lane in Cottage Grove by general contractor Duren Custom Builders of Sun Prairie. Owner Dan Duren said business is picking up a bit this summer for home builders after five very weak years tied to the national housing crash and recession. The 80 housing starts last month constituted the best June builders have seen since 2007. 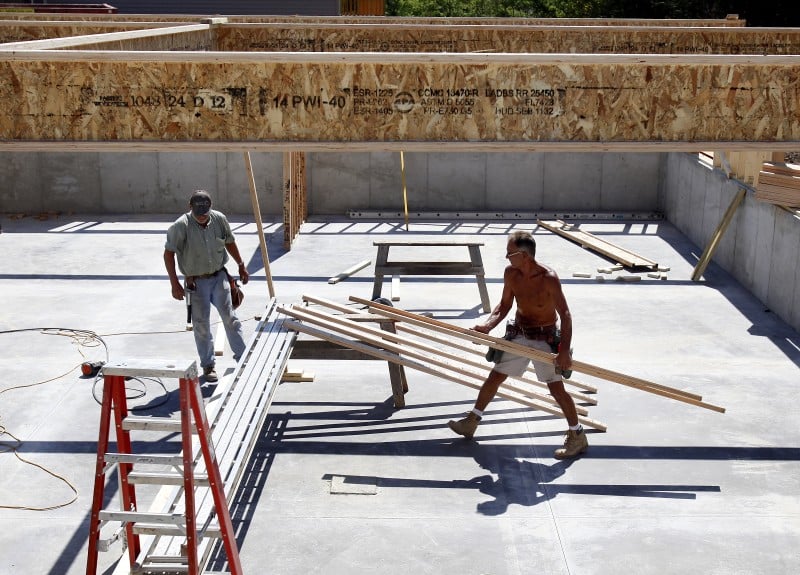 More homes are being built in Dane County this summer, but anyone who signs a new home contract should first research possible builders carefully and take other steps to ensure the project moves smoothly and on-budget. One imperative is to make sure suppliers and subcontractors like these, pictured working on a house being built in Cottage Grove, are paid with part of the money that homeowners give builders. Homeowners should get lien releases from their builders to ensure they can’t be sued later by an stiffed parties. 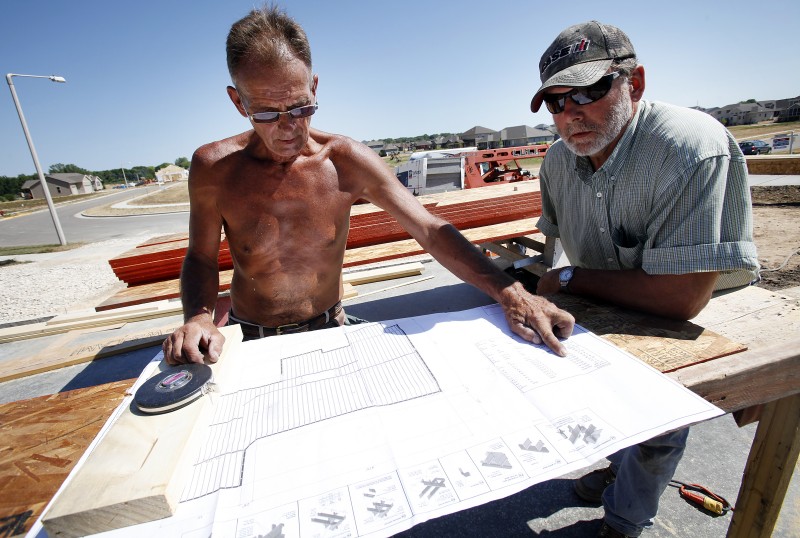 Subcontractors Tony Krebs, left, and Greg Freidel look over plans for a home being built on Smithland Lane in Cottage Grove. Duren Custom Builders is the general contractor.

In 31 years of home building, Tom Zimmer has been surprised — make that flabbergasted — by one constant: what little thought most people give, he said, to choosing the right home builder.

“I run into this all the time,” said Zimmer, a custom builder from Fitchburg. “If you were going to buy a refrigerator, would you not go to three or four places, read Consumer Reports, follow up with a company’s references, and make sure you get it at a reputable place?”

“People do not do any of that building houses,” he added. “What people do — and I’ve had them in my office doing this — is they come and just say, ‘Tom, how much a square foot?’”

Zimmer, who in March put up the framing for University of Wisconsin football coach Bret Bielema’s new house on Lake Kegonsa, said he can’t quote any customer an exact price until he knows a lot more details about a job.

What’s more, while consumers certainly can’t be faulted for trying to get a good price on such a major purchase, it’s a mistake, Zimmer said, to rely on price alone in deciding.

“You need to do your homework,” he said. “But it seems like with a builder, people just want to take the cheapest guy.” That approach can backfire if a builder takes short cuts, substitutes cheaper materials or sticks buyers with a big final bill after low-balling to win a bid.

“There are lots of ways to cheat on a house,” Zimmer said. “With the economy being down, we’ve lost a lot of builders, and the crummy ones usually go first. But now, (with an uptick in building permits), they’re starting to stick their heads up again.”

New home permits hit a five-year high in June in Dane County. Housing starts increased nearly 43 percent to 80 permits, up from 56 in June 2011, according to MTD Marketing Services of Wisconsin.

That’s still historically low — and a long way off from the high of 258 permits in June 2003 — but it’s the best June builders have seen since 2007, when there were 114 permits. It also marks five out of six months this year to post a year-over-year increase.

“Business is going quite well for us,” said Sun Prairie-based custom builder Dan Duren. “We have a number of homes started, and we’re talking to new people on a regular basis.”

But good market or bad, anyone signing a new home contract should do so with care, experts said. Beyond researching the best builder for the job, people having a home built need to make sure they:

• Understand the construction process and what’s covered by the builder’s warranty.

• Keep in close contact with their builder as construction takes place.

• Protect themselves financially by securing “lien releases,” which show subcontractors and suppliers were paid. The builder should provide lien releases as construction occurs, so the homeowner can’t be sued for unpaid bills later.

Local real estate lawyers, meanwhile, say the best way to ensure you don’t get cheated is to have an attorney review and sign off on construction contracts.

It may sound self-serving, Madison attorney James Graham acknowledged, but hiring a lawyer versed in real estate law can put a new home customer in a much better position.

“Most (new-home) transactions don’t involve an attorney, and to the extent a person is represented by anyone, they’re often using a real estate broker — who’s not trained in reviewing contracts, is not allowed to give legal advice, and is an interested party in the transaction,” said Graham, who works for Accession Law.

How to pick a builder

Industry and consumer experts said a builder should be a good fit personally and professionally.

“Find a builder you can communicate with,” said Jerry Deschane, executive vice president of the Wisconsin Builders Association. “Find someone you’re comfortable working with, because you’re going to spend a lot of time and make some very stressful decisions with them.”

To research builders, consumers can ask for references, check with trade associations, and look up builders’ legal histories in online court records.

People also should search out references on their own, rather than relying only on a builder’s list.

“You can do it by talking to others,” said Kent Carnell, a trial lawyer at Madison-based Lawton & Cates. “If you can talk to somebody in the building industry, that’s good, but maybe it’s a commercial contractor rather than a residential builder, and you can ask them what they know about companies that are building houses.”

Andrew Inman, vice president of development for T. Wall Properties, recommended consumers check with a company’s vendors and subcontractors on past jobs. Builders can be asked for such a list, and those on the list may be able to suggest others.

“People should ask, ‘What is your procedure to make sure my home is built on time and in a quality fashion?’” added David Simon, president of operations for Veridian, Dane County’s largest home builder. “There are a lot of choices to made, which can be fun and exciting, if you’re doing it right.”

“Most reputable builders want to have happy clients,” he said. “That’s how they make their living. The frustration for builders is if they don’t realize until fairly far along in the process that they’re building something a person might be complaining about and calling a defect. It usually comes from a failure to communicate early on.”

Confusion over change orders is a common way things go bad. Desired changes to the job should be documented in writing.

“There’s much less likelihood of disputes that way,” Graham said. “You’ll hear a builder say, ‘Every time I turned around, they wanted a change here and a change there,’ but later the client had a completely different recollection.”

Sun Prairie builder Duren, who constructed a 4,400-square-foot home in Bristol for this summer’s annual Parade of Homes, said he was “always willing” to weave in clients’ ideas as he builds, though he said sooner was better.

“I tell people to jot down their wants and needs,” Duren said. “Keep a list, and when you see something you like somewhere, if you can take a photo, pictures are always helpful.”

Carnell said consumers should insist on a specific completion date for the construction and include penalties if the house isn’t finished by that time.

“Builders don’t like that,” he said. “But it helps get it done. Give them enough time to complete it — a typical time in Madison is five or six months — but then make sure it’s done within that time.”

Graham said the construction lawsuits he has handled always erupted from three areas: a project being late, being over-budget or falling apart.

Carefully drawn contracts can minimize issues. “You try to have contracts specify those areas with sufficient detail and also to anticipate problems and solutions,” Graham said.

Carnell also warned people to be sure their builders’ estimates for supplies and furnishings, known as “allowances,” are realistic. A builder might quote $5,000 for cabinets, for instance, but that could be for lower quality materials, while the cost to get something that looks like it did in the builder’s model home might be $10,000.

TIPS ON CHOOSING A HOME BUILDER

• For references, ask the contractor for names, addresses and phone numbers of past customers, local suppliers, banks, subcontractors and consultants, such as architects and engineers.

• Ask the contractor for any industry designations or trade association memberships.

• Ask if the contractor will let you see other projects the company has done, both completed and in progress.

• Ask who supervises the contractor’s construction.

• Ask how long the contractor’s trade people have been working with him or her.

• Will the contractor provide a complete and clear contract?

• What type of warranty does the contractor offer?

• Does the contractor build the size and type of house you want?

• Are there any liens against properties the contractor has built?

• Take your time and get multiple bids.

WHAT TO ASK BUILDER REFERENCES

Here are some important questions to ask references about a builder.

For more questions and detail, see the Wisconsin Builders Association website at wisbuild.org. Click on the Consumer Information link under the News tab.

• Was the builder easy to reach during the project?

• How did the builder charge for change orders?

• Was follow up on warranty work completed in a timely way?

• Did the builder follow plans and specifications, or were changes made without consulting you or the architect?

• Were there any surprises, or did the work go smoothly?

PBS Home site, for tips and advice on hiring a contractor, bids and references, subcontractors and the building contract

Subcontractors Tony Krebs, left, and Greg Freidel work on a home being built on Smithland Lane in Cottage Grove by general contractor Duren Custom Builders of Sun Prairie. Owner Dan Duren said business is picking up a bit this summer for home builders after five very weak years tied to the national housing crash and recession. The 80 housing starts last month constituted the best June builders have seen since 2007.

More homes are being built in Dane County this summer, but anyone who signs a new home contract should first research possible builders carefully and take other steps to ensure the project moves smoothly and on-budget. One imperative is to make sure suppliers and subcontractors like these, pictured working on a house being built in Cottage Grove, are paid with part of the money that homeowners give builders. Homeowners should get lien releases from their builders to ensure they can’t be sued later by an stiffed parties.

Subcontractors Tony Krebs, left, and Greg Freidel look over plans for a home being built on Smithland Lane in Cottage Grove. Duren Custom Builders is the general contractor.