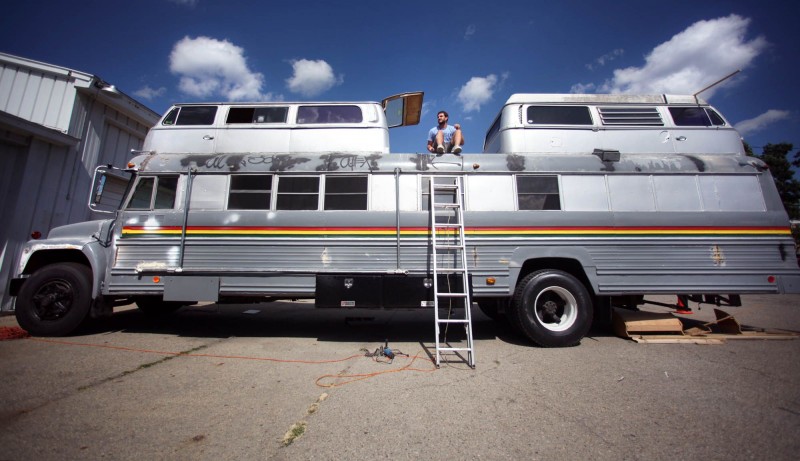 This unique bus is being renovated and readied for a cross-country tour as the Venture C Mobile Art Collective at Sector67, an alternative business incubator. Michael Fenchel, Madison, says the vehicle — a school bus topped by two Volkswagen buses — will house an art studio in front and a music studio at the rear of the main "floor." Living quarters are on the "second story." 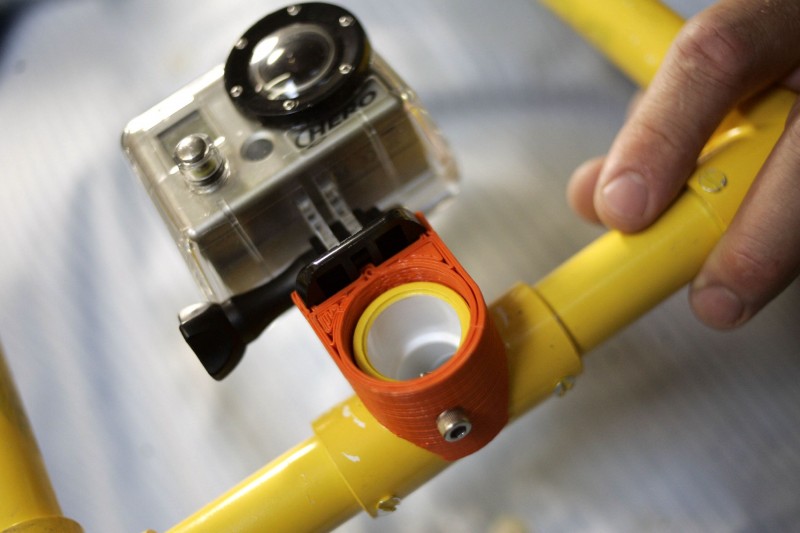 The bracket at center supports an underwater camera and was made with a 3D printer at Sector67, 2100 Winnebago St. 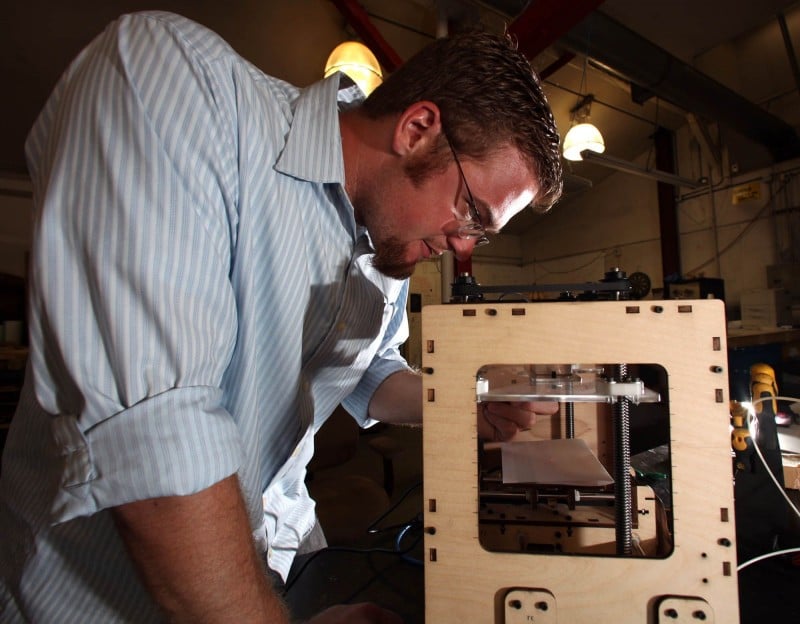 Mark Ratzburg is developing a laser cutting accessory for a 3D printer at Sector67, an alternative business incubator in Madison.

Some of the oldest buildings in Madison house some of the newest technology and innovations.

Two business incubators that have opened in the past year, 94Labs and Sector67, are not the traditional offices or laboratories, and their methods are anything but standard; yet, they are helping entrepreneurs create products and start companies more rapidly than ever before — one, through an intensive program that focuses immediately on customers, and the other, by providing tools to turn pie-in-the-sky ideas into real things.

94Labs opened this spring at 1 N. Pinckney St., a building that dates back to 1871, whose previous occupants included American Exchange Bank.

Beyond the imposing vault doors is a sleek, airy room with about a dozen workspaces. On the wall at each workspace is a large whiteboard, papered with sticky notes grouped under headings such as Key Partners, Customer Segments, Value Propositions and Revenue Streams.

The board is titled "The Business Model Canvas." It is each company's business plan.

Named for the Interstate 94 route that connects the so-called IQ Corridor between Chicago and Minneapolis, 94Labs uses "lean startup methodology," with an intensive, 12-week incubator program for technology business ideas.

"This is not summer camp," Meier said. "We start by focusing on the customer segment: who is the core customer and what does that customer really want?"

Over the 12 weeks, participants get help achieving four goals:

• Identify and talk to potential customers.

• Build a presentation to show to potential investors.

Starting in Milwaukee last March with five companies, the incubator class that began in Madison in June drew 150 applicants nationwide; 14 were accepted and "graduated" in August.

"Six of the 22 companies we've started this year actually have some revenue," Meier said.

A lawyer and serial entrepreneur, Meier used Y Combinator, in California, as a model. Launched in 2005, Y Combinator puts tech startups through a three-month immersion program and invests $18,000 in each one. More than 300 companies have been created, the program's website says.

In Wisconsin, Meier joined with serial entrepreneur Emmanuel Mamalakis and attorney Joe Kirgues, both of Milwaukee, to start 94Labs. In eight months, it has incubated 19 companies and put three others in a more advanced accelerator program. Those companies created about 100 full- or part-time jobs so far, Meier said.

"Think of this as a farm club. We're creating large volume of high-quality startups," Meier said. "With our model, we could change the entire dynamic of the economic base of our state."

On the East Side, Sector67 is like a giant playroom for hobbyists and tinkerers. But it's not just for fun; it's for sparking entrepreneurship.

Located at 2100 Winnebago St., a building that once was a pole barn — age unknown — Sector67 opened last October and has gradually filled its space with all sorts of equipment.

There are sewing machines, workbench tools, computerized milling machines, and even a pottery wheel and kilns. A side room full of computers draws neighborhood children who wander in after school to learn how to write software.

It's known as a hacker space, but not the kind of hacker who breaks a software security code. Instead, it means "to take something out of context and use it for something it was never, never intended for," said Chris Meyer, who developed Sector67.

Joe Kerman is working on producing parts for a 3D printer, a machine that makes three-dimensional items from a spool of plastic cord. The printers come in a kit made by MakerBot Industries, a New York hacker group, but parts wear out and need to be replaced, Kerman said. "Hacker spaces were born to make small-volume parts," he said.

Mark Ratzburg, a scuba enthusiast, made a device to hold an underwater camera. He pitched it on a scuba forum. "People were interested in buying it but not at the right price," Ratzburg said. Now, he is working on a laser cutter for use with the 3D printer. He also dreams of building a kit for motorcycles to run on electric power.

In the parking lot, Michael Fenchel is working on a unique, three-in-one bus. The former school bus is topped with two Volkswagen buses and will become a mobile art collective. Fenchel plans to drive it around the U.S. for a year, with a music recording studio in back and artist space in front.

"I want to inspire people to do what they love," said Fenchel, who plans to make a documentary about the project.

Meyer, an Edgerton area native, has long been interested collaborative space. Second-place winner in the UW-Madison 2010 Burrill Business Plan competition and a third-place winner of the 2010 Governor's Business Plan contest for Sector67, Meyer, who studied mechanical engineering at UW, used his prize money to create Sector67.

He amassed equipment by scouring auctions, Craigslist and other bargains. Stacks of screws, knobs and other hardware came from the demise of a local hardware store.

"He's great at finding us these deals. That, I'm convinced, is the key," Kerman said.

Membership to the nonprofit organization ranges from $25 a month for high school students to $200 a month for individual office space. Sector67 has more than 40 members so far. If 67 people join, it will provide enough money to hire Meyer as full-time staff and mentor.

One proud accomplishment of Sector67 was winning two contests to turn a Fisher-Price Power Wheels vehicle into a race car. Seven members — including Ratzburg, Kerman and Meyer — used a discarded toy Jeep body and materials donated by local companies such as Isthmus Engineering & Manufacturing and Renascence Manufacturing Corp. They added big speakers, created a Stephen Colbert head on the 3D printer as a hood ornament, and took first place at Maker Fairs, sponsored by Make magazine, in Kansas City and Detroit.

Meyer said he is amazed at how far Sector67 has come in just under a year. But there is one cloud on the horizon: The City Council recently approved the area for tax incremental financing, anticipating a proposal to build subsidized housing on the property. That means the group will have to find new space. Meyer said he hopes to find an Isthmus location but has no prospects yet.

In the past year, Sector67 has hosted events such as BuildMadison, a 24-hour community "create-a-thon." Another one will be held next weekend, from 11 a.m. Saturday to noon Sunday.

If you haven't saved as much as you would've liked for retirement, Social Security could bail you out.

How to fill in your financial blind spots

'Sideshow and a cult': Cupp's warning on if GOP further concentrates base

'Sideshow and a cult': Cupp's warning on if GOP further concentrates base

This unique bus is being renovated and readied for a cross-country tour as the Venture C Mobile Art Collective at Sector67, an alternative business incubator. Michael Fenchel, Madison, says the vehicle — a school bus topped by two Volkswagen buses — will house an art studio in front and a music studio at the rear of the main "floor." Living quarters are on the "second story."

The bracket at center supports an underwater camera and was made with a 3D printer at Sector67, 2100 Winnebago St.

Mark Ratzburg is developing a laser cutting accessory for a 3D printer at Sector67, an alternative business incubator in Madison.