Follow postgame coverage after No. 25 Badgers fall to No. 5 Hawkeyes in regular-season finale 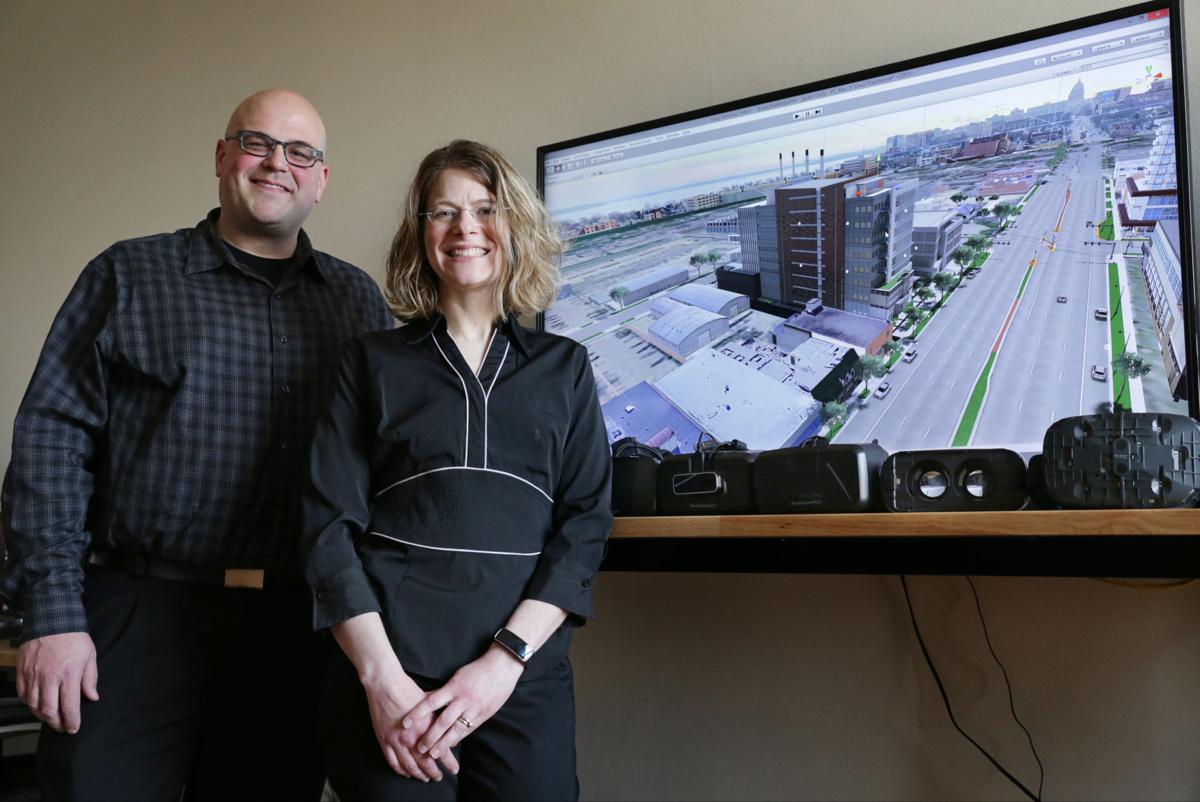 Arch Virtual co-founders Jon and Kandy Brouchoud turn two-dimensional images into three-dimensional, virtual reality experiences, like The Spark building project, shown on the screen behind them. The Spark, planned for the 800-block of East Washington Avenue, will be built by American Family Insurance and will house the StartingBlock Madison entrepreneurial hub. 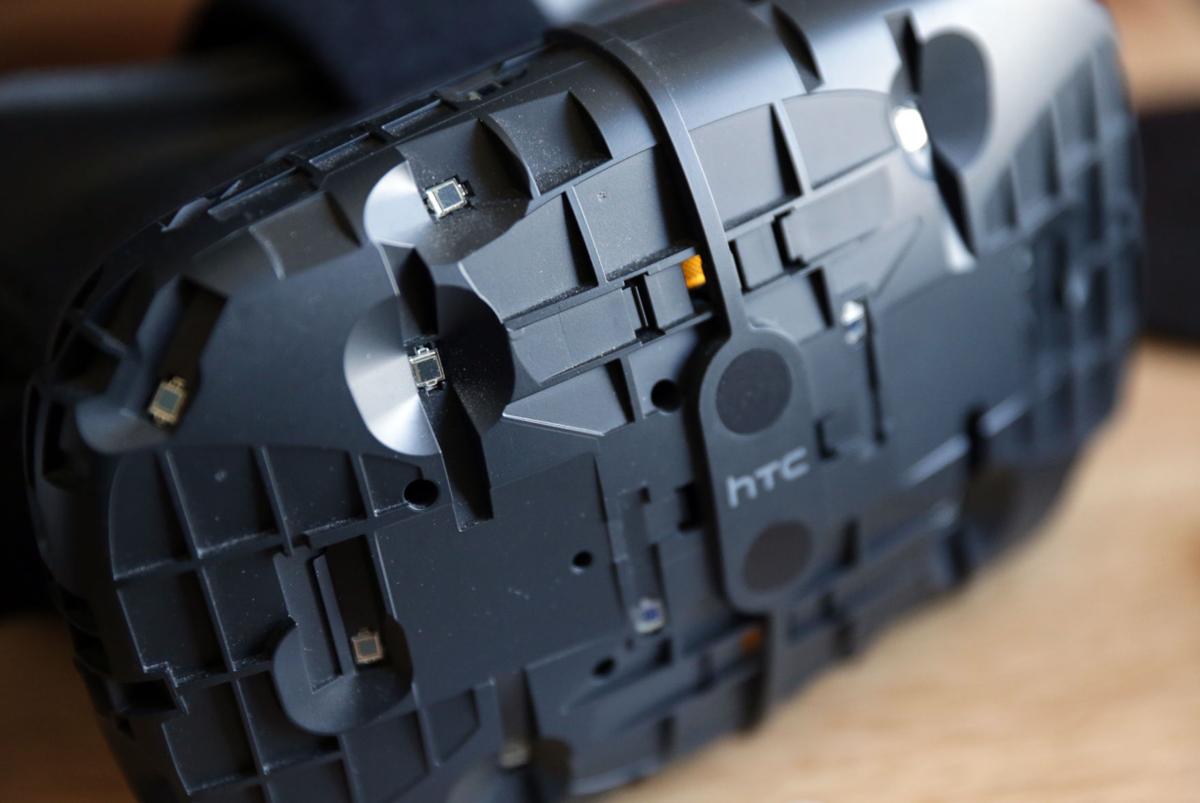 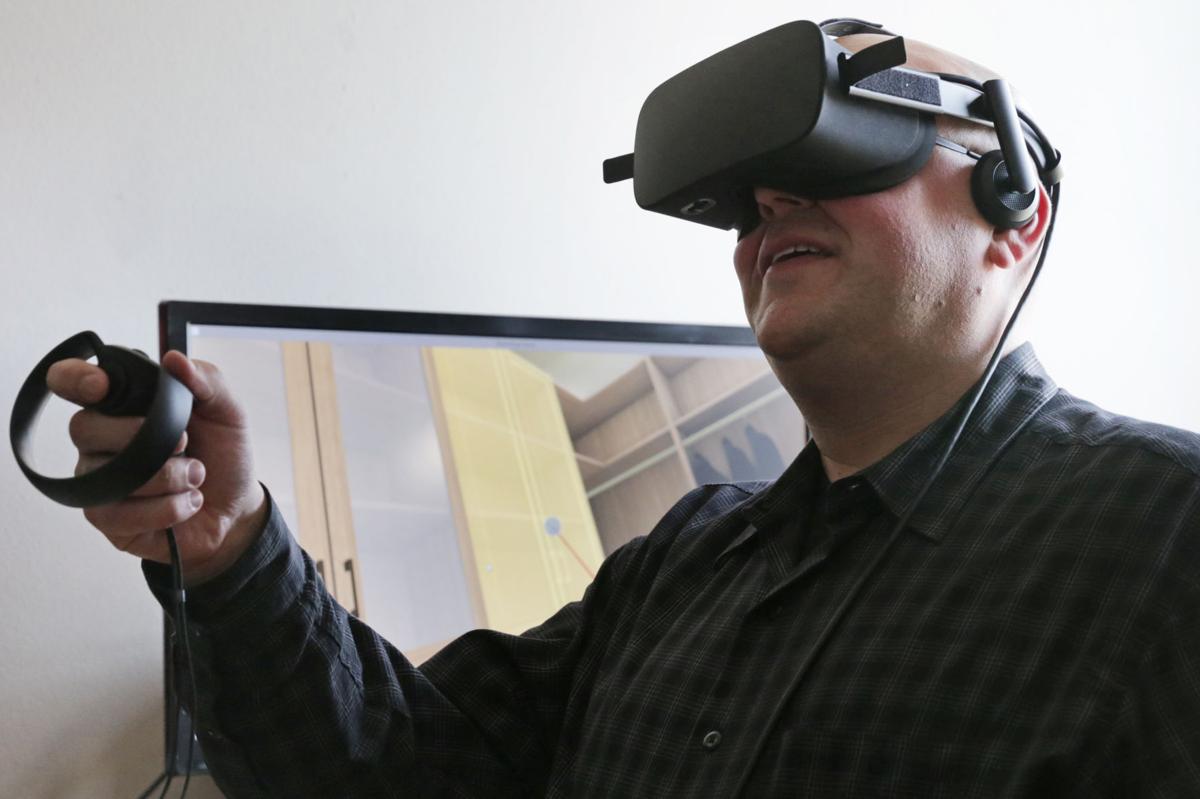 With his virtual reality headset on and an Oculus Touch controller in hand, Jon Brouchoud can open and close cabinets in the closet of a condo planned for construction in a demonstration at Arch Virtual's office in Oregon.

OREGON — At the top of the stairs in a nearly 110-year old, two-story, red-brick building on the village of Oregon’s neighborly Main Street, a husband-and-wife team works on cutting-edge technology that has drawn clients from as far away as California and Texas, Australia and Oman.

Usually, virtual reality (VR) is associated with games or entertainment. But the Brouchouds are not just interested in playing.

Put on a headset in their office and you could find yourself on an oil rig in the ocean, the drill arm poised on your left and the sun setting at the right.

Or you can wind your way through a model of a home, pressing a button or two to change the floor covering or open a drawer in a walk-in closet.

For instance, Arch Virtual has created VR scenarios for safety training for employees of a sewage treatment plant in Australia; for showing off the Sacramento Kings’ new basketball arena — before it was built — complete with a “high-five” from a player; and for letting users race through the Himalayas in a Suzuki Swift.

The company recently provided the Madison Plan Commission with a virtual reality walk through The Spark, the eight-story building planned by American Family Insurance in the 800 block of East Washington Avenue, featuring StartingBlock Madison, an entrepreneurial hub.

Arch Virtual also created a simulation of a planned $350 million student housing project at Texas A&M University. The Brouchouds were consulting with project participants in six other states, working together, live, on a 3-D model of the complex, which will include bathrooms and walk-in closets in each dorm room and a rooftop recreation area complete with a swimming pool and gas grills.

“While it’s under construction, they can show students what the dorms will look like,” Jon Brouchoud said. “In virtual reality, you can hear a splashing sound when you (virtually) jump into the water.

“Every time we do this, we feel like we’re in the future. We’re inhabiting a building that doesn’t exist,” he said.

A report last week by IDC projected worldwide spending in the virtual reality and augmented reality (AR) market will hit $13.9 billion in 2017 — a 130 percent increase over last year — and could reach $143.3 billion by 2020.

“On the virtual reality side, producers are quickly moving beyond games to create new content mainstream audiences will embrace,” said Tom Mainelli, vice president of devices, AR and VR for IDC, a technology market research firm in Framingham, Massachusetts.

The Brouchouds say, though, that so far they know of few direct competitors in their part of the industry, at least in the Madison area.

Their interest in devising 3-D simulations of buildings is a natural.

Jon, 41, of Manitowoc, and Kandy, 39, who grew up in Dubuque, Iowa, met as graduate students in architecture at UW-Milwaukee. In 2003 they started Crescendo Design, designing homes in an environmentally friendly way, and after moving around the Midwest and spending a year in Berkeley, California, they settled in Oregon, about 10 miles south of Madison, in 2007.

But there were a few pebbles along the way. “We found clients sometimes had a hard time visualizing a design in two dimensions,” Kandy said.

“We were practicing sustainable design principles yet traveling around the Midwest” to meet with clients, said Jon.

Then they discovered the virtual world Second Life, which could bring their designs to life and put them in the same “virtual” room as their clients, even if they were miles apart.

“It just seemed like a huge opportunity,” Jon said. Arch Virtual later moved on to another technology platform, Unity, and built its proprietary software, Immerse, on the Unity engine.

When the Spark project came before the Plan Commission in December; other presenters at the meeting offered blueprints and slides.

“When it came to ours, committee members put on a headset and saw, ‘This is actually what it’s going to look like,’ ” Jon said.

The visuals included video taken by a drone that was flown to the planned rooftop height at The Spark’s site to show the view from above. “You can see both lakes (Monona and Mendota) up there and the state Capitol,” he said.

“They are a fun DreamBank fly-through, a 360-degree look at the Green Bay Packers Dream Drive, and How to Build a Business. The technology adds a fun, interactive component to the inspiration-filled tools and resources offered at DreamBank,” Tillman said.

Virtual reality goes beyond 3-D and lets the user interact with the environment that’s visualized in the goggles.

For example, in designing a home or commercial building: “If you want to change the height of a ceiling, you can really feel it in a visceral way,” Jon said.

Through the Immerse software platform that Arch Virtual has developed for use with Oculus Rift and HTC Vive headsets, people around a room or around the world can view the same VR vision and can collaborate on changes.

“I think this is going to change the industry. It’s going to be a new way that architects can visualize (projects) beforehand” and make sure all the parties involved understand how a project will turn out, Kandy said.

Jon said when building owners first visit a completed project, they often are surprised about some detail in the design, even after seeing the blueprints and illustrations.

“With this technology, we can take all of that surprise away,” he said.

Arch Virtual has designed virtual medical facilities such as an operating room, that doctors and nurses can walk around and see if equipment is positioned correctly. “There’s millions of dollars at stake there,” he said.

The company also has scanned real human bodies into the system so medical students can practice performing surgery — at the virtual level — before they do it in real life.

Manufacturing clients have asked for virtual versions of some of their equipment, Brouchoud said. In one case, a company wanted to show off an industrial tank at a trade show but the two-story tank was too big to transport. So Arch Virtual created a VR scenario complete with animated action showing how the tank operates.

A builder developing $1.5 million townhouses in Florida was handing potential homeowners a thick binder that laid out the many options they could choose, ranging from floor materials and paint colors to plumbing and lighting fixtures. Arch Virtual — using manufacturers’ specifications — created a virtual reality scenario that shows the buyers how each of those colors and fixtures would look together, Brouchoud said.

“Now, every square inch is accessible. ... The key thing is to see it all together,” he said.

VR for the masses

Oculus Rift came on the scene in 2014, but it was not until 2016 that the headsets became available in big-box consumer stores, Brouchoud said.

“That’s opened up whole new markets for us,” he said.

Meanwhile, the technology has improved, largely solving past problems such as inducing motion sickness in some users, he added.

Financially, Arch Virtual has been profitable from the start, the Brouchouds said.

Bootstrapping the company’s first years with their own money, the couple raised a small amount from investors, as of Jan. 1, 2017, and added Shannon Lory, of Madison, as a partner to manage sales and marketing.

They are the only full-time employees, but Arch Virtual has 24 VR software developers on contract, half of them in the Madison area, to work as needed.

“It’s such a new technology, we had to cast a really big net,” Brouchoud said.

Brouchoud said Arch Virtual has developed its Immerse Creator platform that can be licensed so others can use it to fashion their own virtual reality experiences.

By the end of this year, Arch Virtual expects to top $1 million in revenue from virtual reality projects since 2014, Brouchoud said.

He said the technology is likely to shake up all sorts of industries, not just architecture but the medical field, as well.

“It could be saving lives. That’s an amazing feeling,” Brouchoud said.

The idea is to get VR tools into the hands of more people, says CEO Jon Brouchoud.

Arch Virtual co-founders Jon and Kandy Brouchoud turn two-dimensional images into three-dimensional, virtual reality experiences, like The Spark building project, shown on the screen behind them. The Spark, planned for the 800-block of East Washington Avenue, will be built by American Family Insurance and will house the StartingBlock Madison entrepreneurial hub.

With his virtual reality headset on and an Oculus Touch controller in hand, Jon Brouchoud can open and close cabinets in the closet of a condo planned for construction in a demonstration at Arch Virtual's office in Oregon.