An arbitration panel has ruled The Edgewater hotel and the company it hired to manage the hotel’s $100 million construction is responsible for many of the delays and cost overruns, and has ordered the hotel to pay more than $14 million to the general contractor and an architectural firm.

The ruling Thursday by the three-person panel included harsh criticism of the way contracts were written and the way in which the hotel’s owner, Bob Dunn, “micromanaged” the project. Dunn hired Hammes Co., of which he is president, to make decisions and manage the project that started in November 2012. The hotel opened in fall 2014 but several projects remained incomplete.

The arbitration ruling came just over a year after J.H. Findorff & Son filed a $16.3 million construction lien against The Edgewater in Dane County Circuit Court. At the time, it was one of 16 liens totaling $23.7 million filed against the hotel by contractors.

The 51-page ruling also ordered Findorff of Madison to pay $1.4 million to Nickles Electric, the electrical contractor, and $3.1 million to J.F. Ahern Co., the mechanical contractor. But the largest judgment was against The Edgewater, ordered to pay $13.8 million to Findorff and $289,287 to Boston-based Elkus/Manfredi Architects.

“The panel finds that Hammes/Edgewater did not properly manage The Edgewater hotel project,” wrote Kendall Schoonover, chair of the arbitration panel of the American Arbitration Association that heard 28 days of testimony between Feb. 28 and May 26. “In fact, Hammes/Edgewater became its own worst enemy.”

Schoonover wrote that Hammes/Edgewater failed to provide timely design and construction documents to the contractors, to give timely design decisions to progress and advance construction and to operate in good faith in its dealing with the architect, general contractor and subcontractors. The ruling also said Hammes/Edgewater “failed to negotiate in good faith or in a timely manner” on requests for change orders and contract time extensions and it failed to make timely payments.

“Ironically, Hammes is the only entity that has received full payment,” Schoonover wrote. “Given the overwhelming talent level of the parties, some of (whom) literally spent months of their lives designing and constructing this building, this project should have been a roaring success. It was not, however, at least financially, and it ran off course and ended up in this arbitration with all parties sparring with each other.”

Dunn and Dave Beck-Engel, Findorff’s president, could not be reached Friday for comment. But Amy Supple, the Edgewater’s chief operating officer, said that the arbitration panel’s ruling will not affect the operation of the hotel.

“While we don’t agree with the panel’s ruling the process was set up to bring these outstanding matters to closure. We always understood there could be any number of outcomes and we were prepared for any of them,” said Supple, who learned of the decision Friday. “The hotel owners are committed to this property, as is the operating team. This ruling doesn’t impact the operating business. I’m glad to have it over and to move on.”

The Edgewater project on Lake Mendota’s eastern shore and at the west end of Wisconsin Avenue involved years of planning and debate over public financing. Dunn ultimately dropped his request for $16 million from the city and instead secured funding from an investment group that includes philanthropists W. Jerome Frautschi and Pleasant Rowland.

The original hotel opened in 1948 with 107 rooms but Dunn’s project nearly doubled the number of rooms, added restaurants, a spa, rooftop event space, a ballroom, public terrace and a pier. The 202-room property has 356,220 square feet of space under roof including a new 15-story tower with two presidential suites and four condominiums, three of which are completed, Supple said.

Not included in the awards were costs for attorney fees and expert witnesses. The panel ruled that The Edgewater should pay Elkus/Manfredi $479,043 and Findorff $325,489. Findorff was ordered to pay $184,639 to Ahern and $26,641 to Nickles.

The case and arbitration ruling document lays open the inner dealings of one of the city’s most high-profile projects and one of the most powerful developers in the state. Dunn’s projects, as president of Hammes, have included Olympic venues, Ford Field in Detroit, MetLife Stadium in New Jersey, the Kohl Center, Miller Park and the $293 million renovation of Lambeau Field.

The Edgewater was not a Hammes project but Dunn hired the company to oversee the hotel’s construction. However, a project management agreement between Dunn and Hammes stipulated that only Dunn could make decisions for any item valued at more than $10,000, something that was not relayed to Findorff and others hired for the project, according to the ruling.

“Because Mr. Dunn was involved with various other Hammes project(s) and traveled a great deal of time, his absence led to significant delays in making important decisions. This had a ripple effect on the design effort and, ultimately, the construction of the project,” the panel wrote. “In fact, the project manager (Hammes) was an independent contractor only as a technicality. Hammes was actually an alter ego of Mr. Robert Dunn who controlled every aspect of what Hammes did before, during and after the project.”

All payments ordered by the panel are due by Aug. 27, according to the ruling. An appeal is unlikely, said Dick Heymann, an adjunct professor of law at UW-Madison. Arbitration is used to avoid court proceedings and is set up under an agreement by all parties involved in the case. In most cases, a ruling is final.

“There are frequently delays in major construction projects, frequently disputes among the parties as to whose fault it is and frequently a contract calls upon the party to submit such disputes to arbitration,” said Heymann, who did not have details of the ruling. “In big projects like this it’s harder to be timely and it’s not necessarily the fault of the contractor or subcontractors.”

Construction lien filed against The Edgewater

Interactive galley tells the story of Madison and more

Part of the $100 million redevelopment of The Edgewater hotel includes a more than $1 million interactive gallery on the seventh level of hotel's Wisconsin Building that helps tell the story of Madison.

But Edgewater owners say Findorff is responsible for cost overruns and payments to subcontractors.

In addition, the general manager hired in 2014 is no longer with the hotel.

106-room Tru by Hilton hotel planned for Far West Side

The $5.8 million project is being proposed by North Central Group, the same company that is building the AC Hotel in the city's Downtown 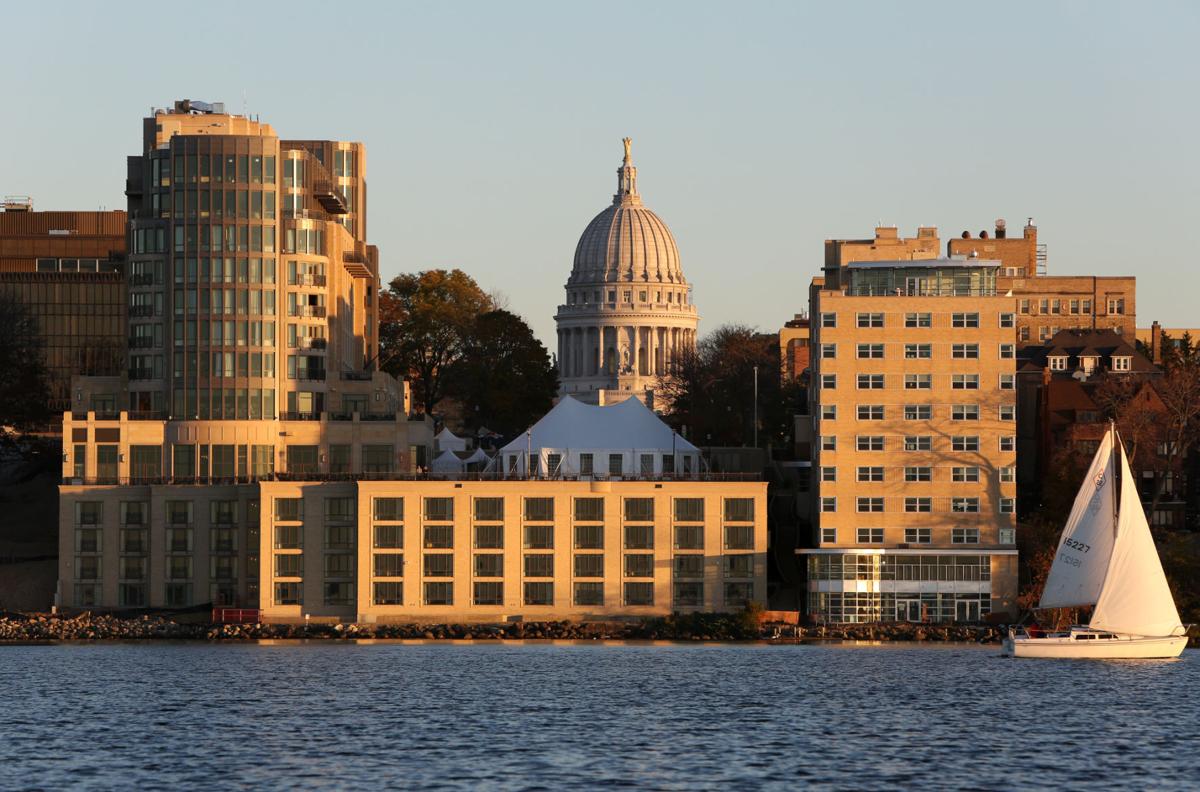 The Edgewater hotel reopened in the fall of 2014 after a $100 million renovation and expansion. An arbitration panel ruled Thursday that the hotel needs to pay more than $14 million to contractors for cost overruns. 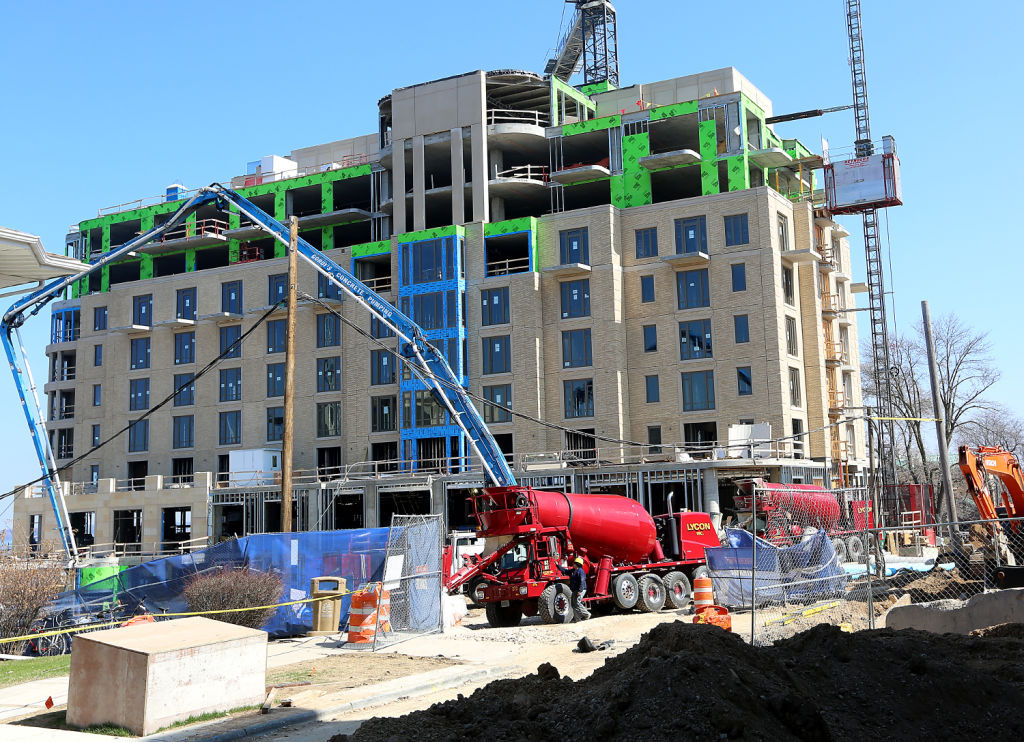 Construction on The Edgewater Hotel began in 2012 and included a 15 story tower. This image is from April 2014. 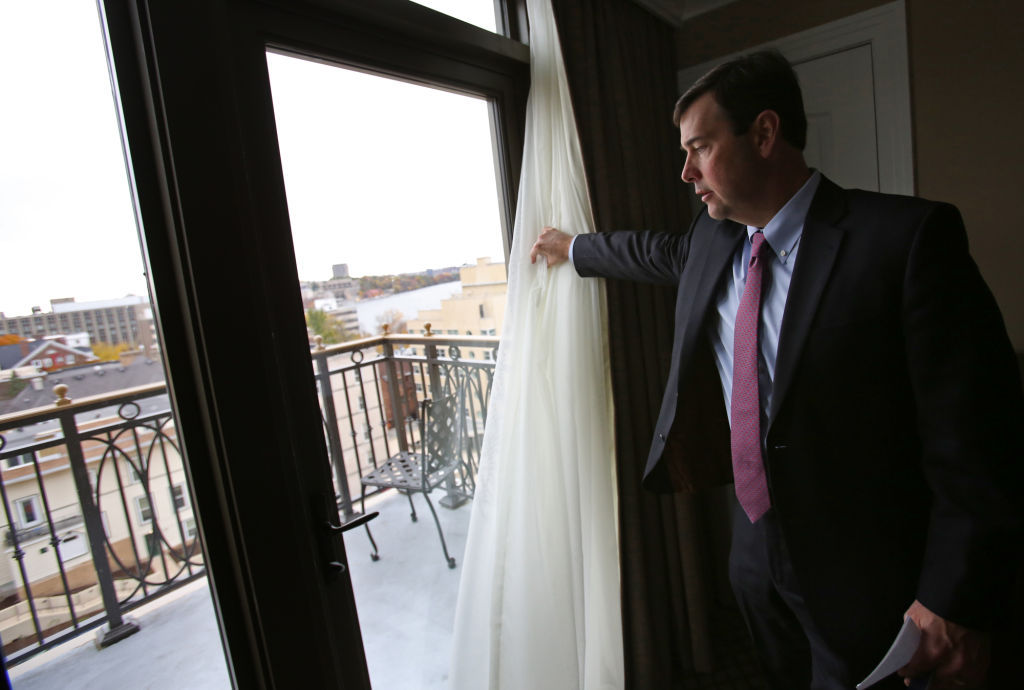 Developer Bob Dunn pulls back the curtains in a room in the main tower of the The Edgewater Hotel to check out the view of Lake Mendota in this image from October 2014.