Early storm damage estimate in Madison is $7-10 million; Southwest Side hit hard
Share this
{{featured_button_text}}
1 of 6 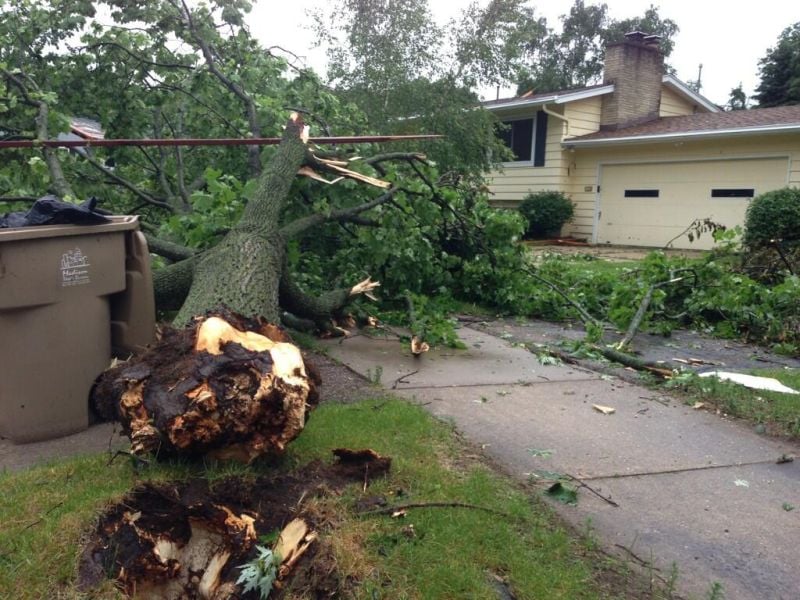 A tree on Yorkshire Road in Madison was among scores of trees uprooted or destroyed from a storm late Monday and early Tuesday. 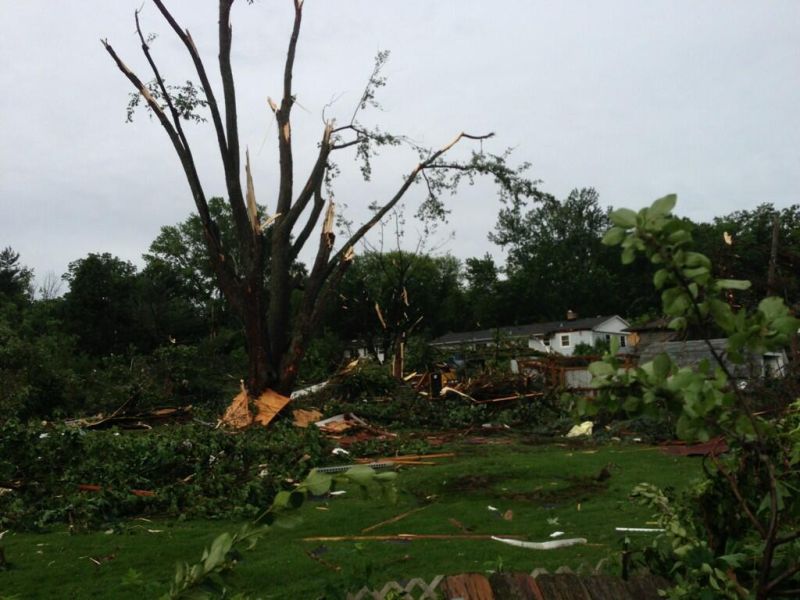 Many of the trees on Friar Lane, Yorkshire Road and Hampshire Place were destroyed. 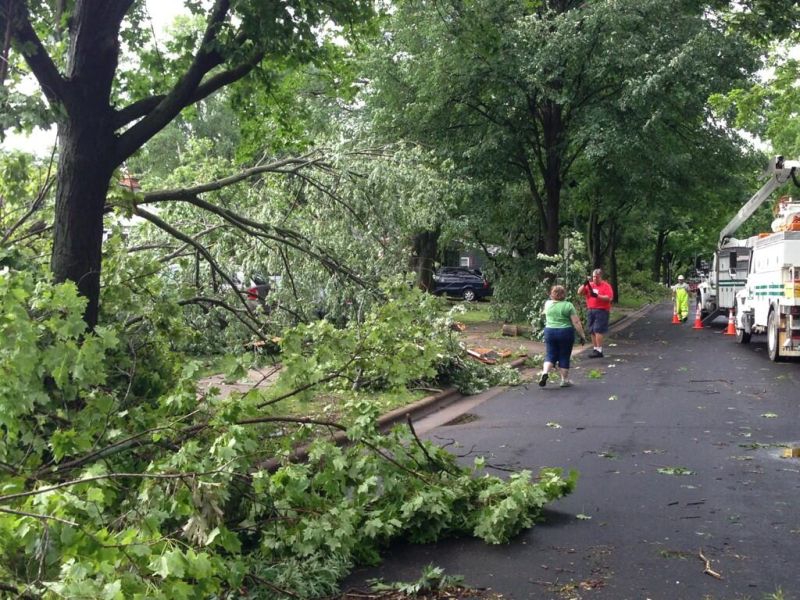 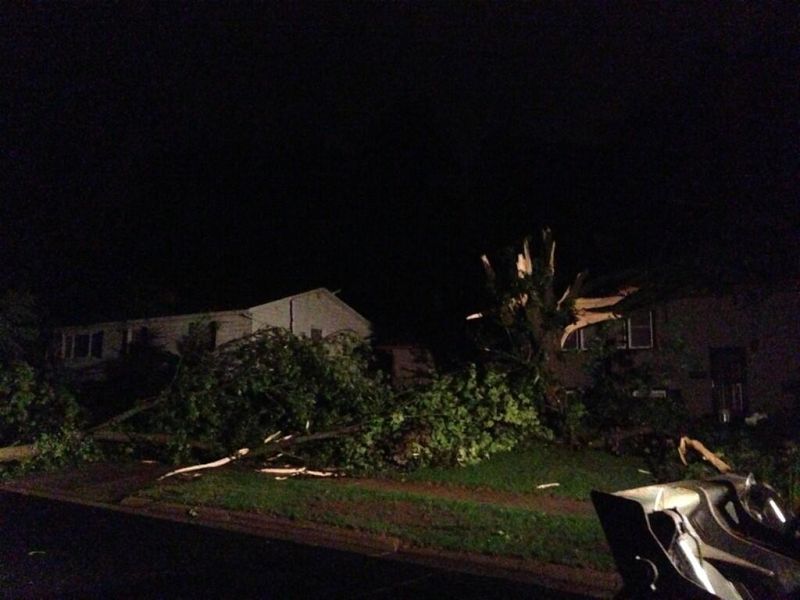 This home on Friar Lane was among at least 23 damaged from a storm late Monday and early Tuesday. Scores of trees were also destroyed but no one was injured, according to the Madison Fire Department. 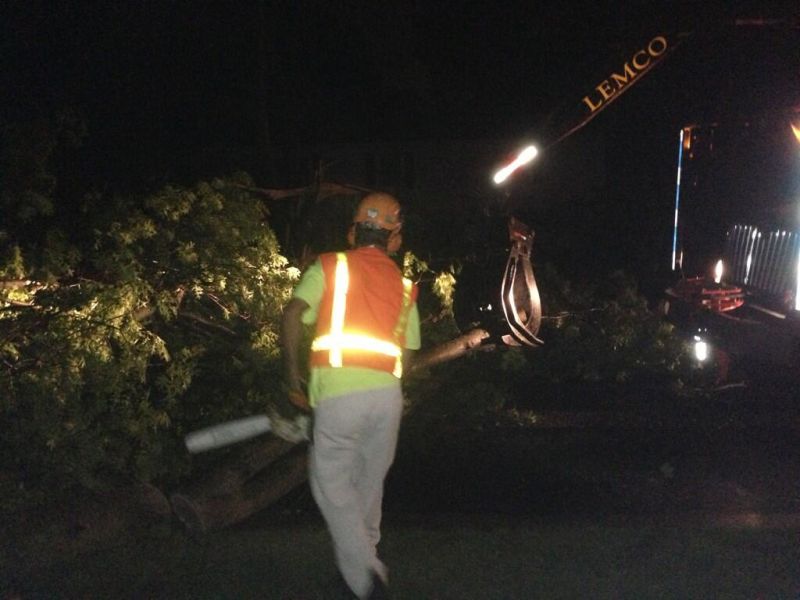 A City of Madison Forestry Department worker uses a chainsaw to remove fallen trees blocking Friar Lane on the Southwest Side. 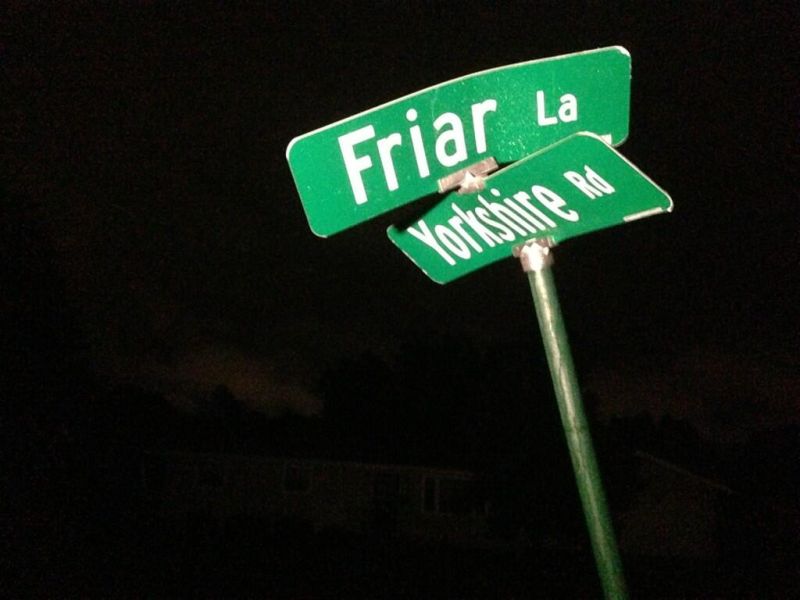 The Southwest Side neighborhood at Friar Lane and Yorkshire Road, near Vitense Golfland, sustained heavy damage in the storms that hit the Madison area on Monday night into Tuesday morning.

12:45 P.M. UPDATE: Madison officials lined up Tuesday morning to deliver this assessment of the city's response to the tornado and storms: Quick reaction, practiced and smooth response, and a lot of cleanup work ahead.

“I am pleased to report we can’t find any serious injuries among all the good people of Madison who suffered through this storm,” said Mayor Paul Soglin at a news conference. He said the preliminary damage estimate to public and private property in the city is $7 million to $10 million, a figure that will surely change.

Streets Superintendent Chris Kelley said limits on brush drop-off will be lifted to aid in removing downed trees from neighborhoods. Already 29 crews were out collecting brush.

Madison Fire Chief Steven Davis said the first call related to the storm Tuesday morning came at 12:16 a.m., with people trapped in a house, a call that brought out the department’s building collapse team. By 12:30 a.m. the decision was made, with Soglin, to open the Emergency Operations Center, a start-up that was “flawless,” he said. He praised the response from residents, too, calling Madison “a good, smart calm community.”

Bus detour information is available by calling 608-266-4466 or going to www.mymetrobus.com, Metro Transit officials said. The only public building to suffer damage was a city garage.

George Hank, director of the city's Building Inspection Division, said inspectors were checking structures for soundness and some have already been deemed unfit for occupancy.

Soglin, wearing a blue-checked work shirt, said he had been on both sides of the city Tuesday morning to assess damage and the city's response and was impressed with what he saw.

“This is why we’ve got regulations in society and why we have city employees. This is why we pay taxes. It is for moments like this,” he said.

Hanks stressed that residents should accurately assess all damages from the storm and report them to the city (608-266-4551), as the city will be sending information along to the Federal Emergency Management Agency in requesting emergency aid.

One of Madison's hardest hit areas by a line of storms that included an apparent tornado late Monday and early Tuesday was on the Southwest Side just west of Vitense Golfland.

The Madison Fire Department said at least 23 homes were damaged and at least six had their roofs torn off in a two-block area of Yorkshire Road and Friar Lane just south of Schroeder Road. Scores of trees were destroyed; some covered vehicles parked in driveways and others blocked Friar Lane.

No serious injuries were reported, but some residents left their homes and took shelter in a Metro Transit bus until they could find alternative housing. Crews from the the Madison Streets Division and from the Madison Forestry Department also responded to help clear the debris and used chainsaws, grapples and front-end loaders.

Darkness and the loss of power to the neighborhood obscured much of the damage but Dawn Sanderson, 40, who lives at 5818 Yorkshire Road, said she knows the damage was severe to her home and her half-acre property that had, until a few hours earlier, been filled with mature trees.

Sanderson was sleeping when the storm hit. Her husband and three daughters — ages 16, 15 and 12 — also were in the home when she was awoken by strong winds.

"I looked out the window like I always do when there's a storm just (in time) to see this tree literally snap and go flying and then the wires spark and fall," Sanderson said pointing to what had been a healthy tree in her front yard. "The roof is gone so these rooms are flooded. The roof is half gone above the kitchen so that is flooded. There's literally water coming through the ceiling lights and fans. The garage is gone."

Madison Fire Department spokeswoman Bernadette Galvez said most people in the neighborhood chose to stay in their homes and not seek alternative housing.

"We're lucky no one was injured," Galvez said as she led a reporter through the neighborhood with a flashlight. "Look at the devastation. Look at the severity."

Nearby, police cordoned off a large portion of Schroeder Road as crews from the city, Madison Gas & Electric, and Hooper Corp. chased the thunder and lightning with a roar of chainsaws and diesel trucks.

John Marshall, a public works supervisor who’s worked for the Madison Streets Division since 1977, was on scene and said the damage was the worst he had seen since an F-1 tornado ripped through several West Side neighborhoods, including Midvale Heights in 2004.

"It was comparable … It hit a pocket very similar to this size and took everything down and damaged some homes. Most of the trees where that hit were virtually gone," he said.

The Streets Division had six groups working through the darkness, each one equipped with three dump trucks, two clamp trucks and a loader. Marshall said he expects streets and forestry crews will have the worst of the fallen trees and debris cleared sometime Tuesday.

On the East Side, moderate to severe storm damage was reported along East Washington Avenue, Jenifer, Spaight and Wilson streets.

Other ares hit hard include Verona and Platteville, where officials announced early Tuesday that UW-Platteville would be closed Tuesday because of damage to campus buildings.

Ken Endres, 72, and his wife, Mary, have lived at 1006 Friar Lane since 1969. The couple's home lost its roof during the storm. They later left their home to seek shelter on a Metro Transit bus brought in to protect residents from the rain. Mary Endres, 73, was in tears, a box filled with medicine bottles on the seat next to her. Ken Endres was wrapped in a blanket wearing jeans, a T-shirt and tennis shoes.

"I looked down the hallway and there was sky out there and the hallway was filled with debris," Ken Endres said. "It was so fast we didn't have time to take shelter. And if we did, we would have been heading down the hall to get downstairs to the family room."

Endres said his neighbor's garage was destroyed and another neighboring home also lost its roof. Another neighbor, Bettie Hall, had a more than 50-foot pine tree crash onto her home. Branches helped soften the blow from the trunk.

"It's bad but fixable," Hall said. "We had the tallest pine in the neighborhood. It was tall when we moved in 25 years ago."

Across the street, Sue Teubert and Lyle Gruen lost their garage, three-season porch, had two of their cars damaged and had the roof torn off their house. On Tuesday morning, water was dripping in the kitchen into buckets, and wet spots had formed on the ceilings of the living room and dining room.

"All the trees are gone," Teubert said. "You can be thankful we're alive."

But heavy rains to the north overnight prompted flash flood warnings for several counties, and more storms are forecast for south-central Wisconsin on Wednesday and Thursday.

Read all the coverage from Madison.com of the recent severe storms and tornadoes.

Slideshow: The 20 most-read stories of June

Madison's Southwest Side took a big hit when a powerful storm that included a tornado moved through the area Monday night and early Tuesday.

Photos: Madison's East Side cleans up after storm

Damage was evident Tuesday on Madison's East Side after a powerful overnight storm that included a tornado.

Larry Sperling tells about damage to his neighborhood

Larry Sperling's home was one of at least 23 homes damaged south of Schroeder Road late Monday and early Tuesday by an apparent tornado.

Received claims were up to 178 late Tuesday afternoon.

The National Weather Service hasn't officially confirmed the severe storm that hit Verona as a tornado just yet, but is saying the possible tornado started out near Mineral Point and lifted and touched down multiple times between New Glarus and Verona.

Wisconsin Emergency Management said five people were injured by flying glass in Platteville when the storm blew out windows in houses.

A tree on Yorkshire Road in Madison was among scores of trees uprooted or destroyed from a storm late Monday and early Tuesday.

Many of the trees on Friar Lane, Yorkshire Road and Hampshire Place were destroyed.

This home on Friar Lane was among at least 23 damaged from a storm late Monday and early Tuesday. Scores of trees were also destroyed but no one was injured, according to the Madison Fire Department.

A City of Madison Forestry Department worker uses a chainsaw to remove fallen trees blocking Friar Lane on the Southwest Side.

The Southwest Side neighborhood at Friar Lane and Yorkshire Road, near Vitense Golfland, sustained heavy damage in the storms that hit the Madison area on Monday night into Tuesday morning.