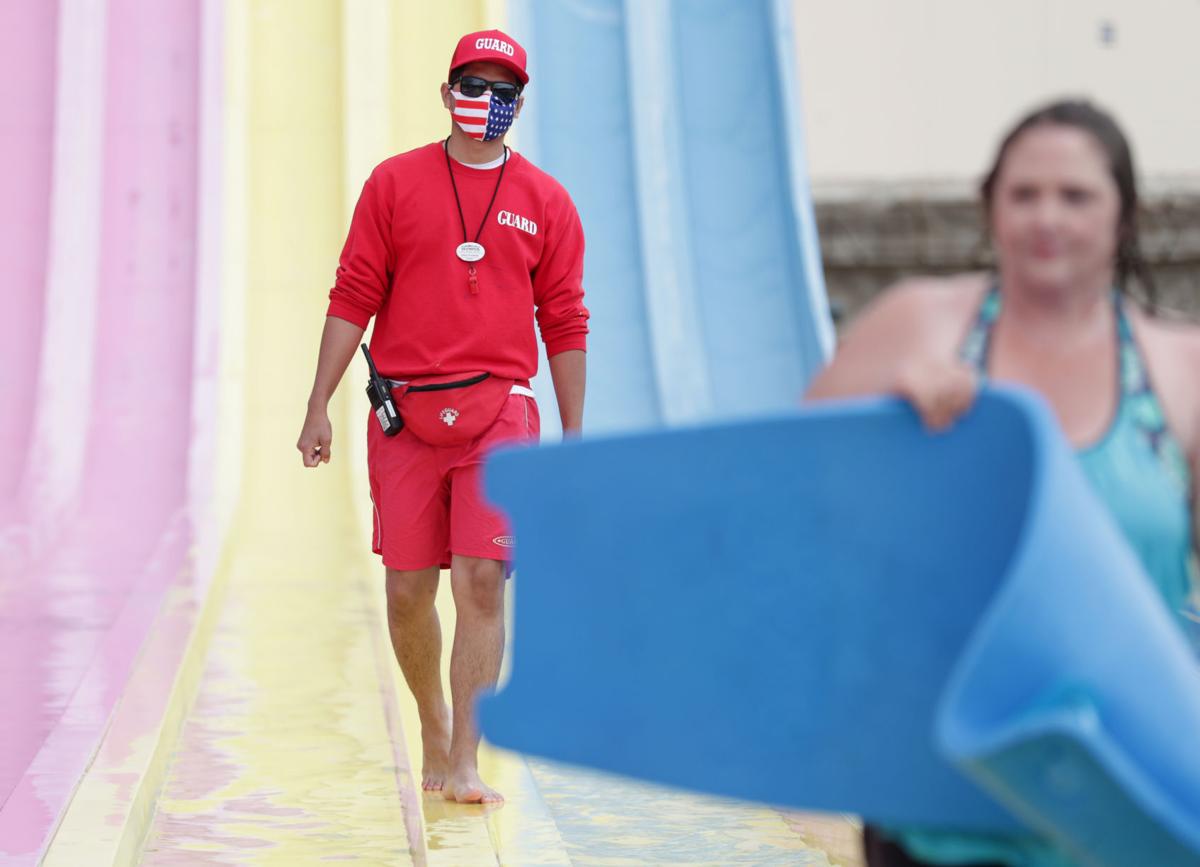 Jesus Fernando was among the lifeguards at Mt. Olympus Water & Theme Park to wear a mask over Memorial Day Weekend last year as Wisconsin Dells was largely quiet due to the pandemic. Crowds picked up as the year progressed, but overall it was a down year for tourism destinations throughout the state. 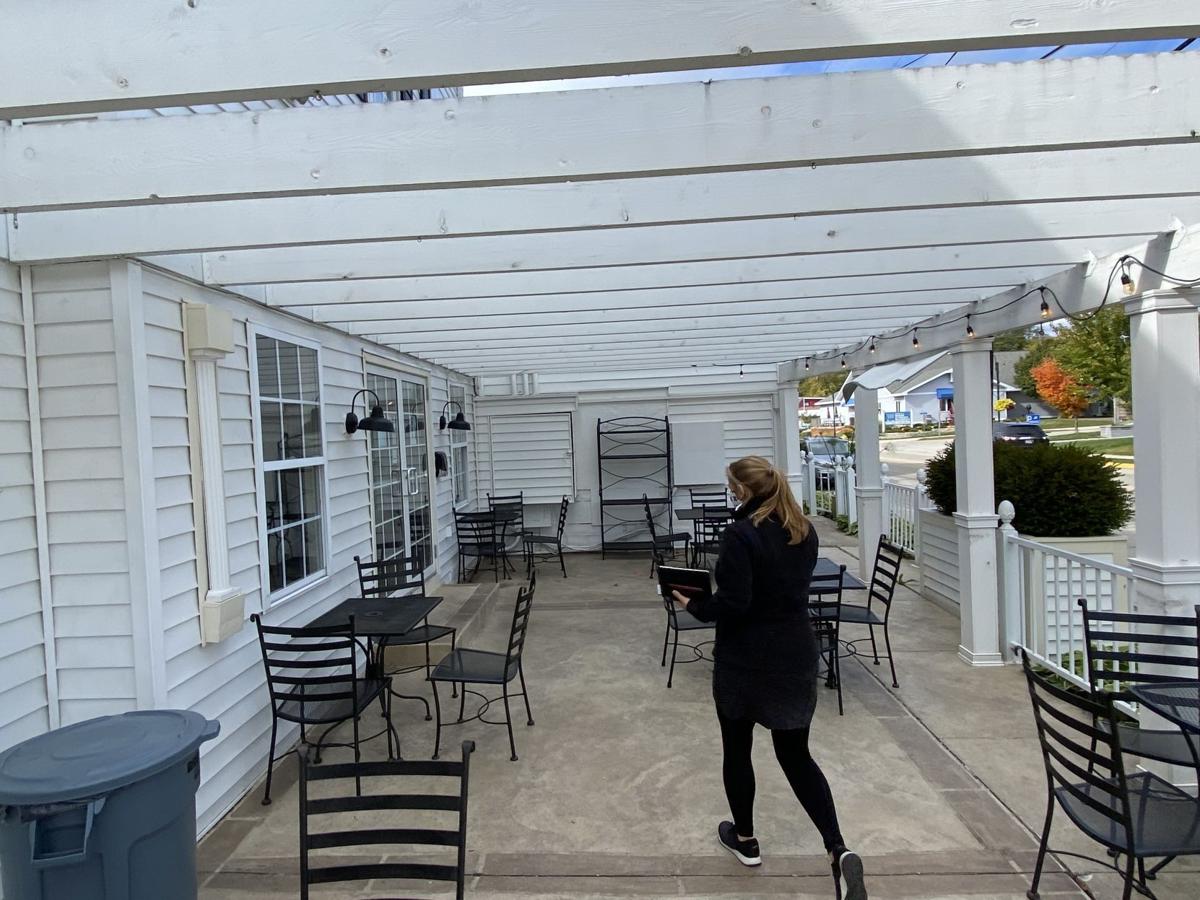 The outdoor seating area at The Fireside in Egg Harbor was a saving grace for the restaurant since owner Lauren Schar closed the dining room last year due to the pandemic. 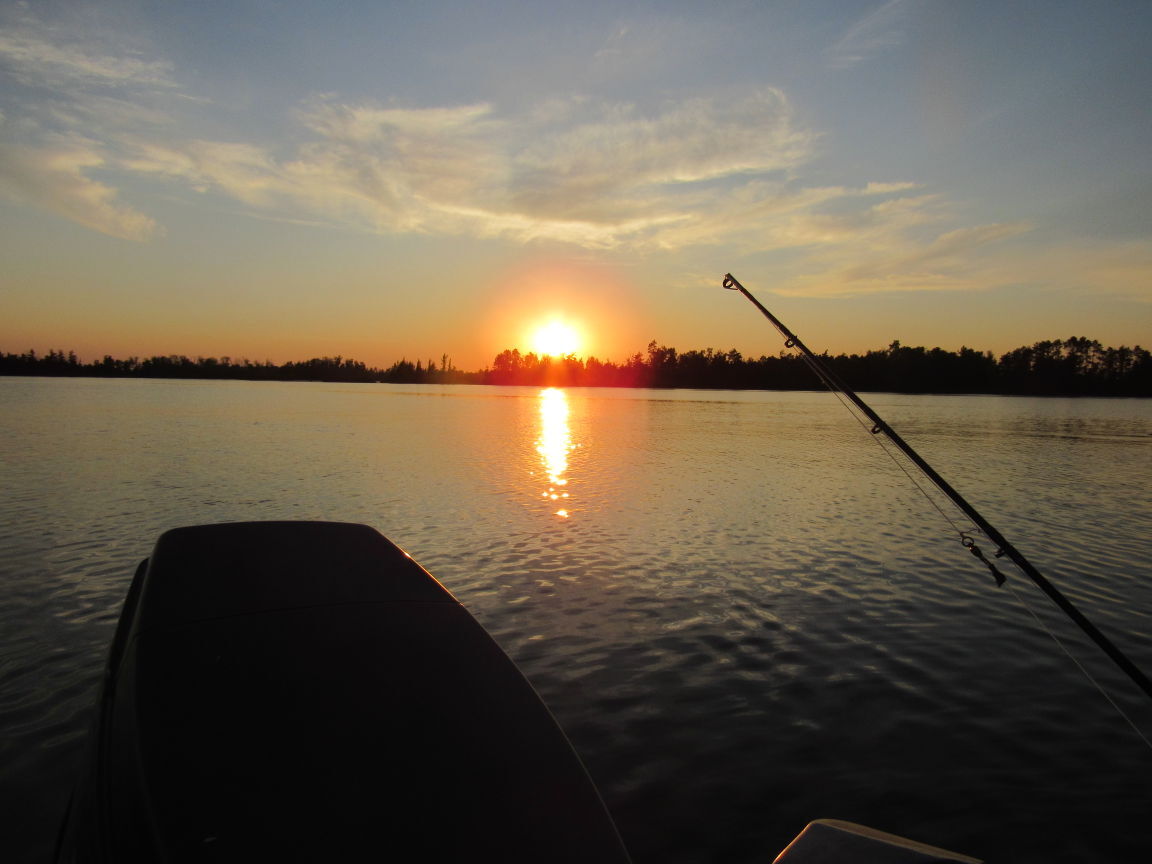 The sun sets on the Turtle Flambeau Flowage near Mercer, a popular destination for anglers, kayakers and campers.

Many stressed the offerings of the outdoors, others created drive-thru experiences and one business began shipping its much beloved donuts to customers who couldn’t travel.

Tourism destinations around the state were creative in 2020 as many of their customers chose not to travel or, for those who did, kept a distance from others.

The pandemic created one of the most challenging years in history for the state’s $22.2 billion tourism industry but entrepreneurial thinking helped ease some of the negative impacts, which won’t be fully realized until 2020 spending numbers are released in early May.

In Wisconsin Dells, where Memorial Day Weekend saw all but one of the community’s major waterparks shuttered and the downtown resembled a ghost town, tourism in 2019 was a $1.6 billion industry. If the region, which covers parts of three counties, were ranked among the state’s 72 counties, it would rank third only behind Milwaukee ($3.8 billion) and Dane ($2.3 billion) counties in overall tourism spending.

Visitors gradually began to return to Wisconsin Dells as the summer wore on and more attractions opened their doors. In the key months of June, July and August, room tax revenue was down about 40%, better than was originally anticipated.

Leisure travel accounts for about 80% of the tourism spending in the Dells with the remainder coming from conventions and business meetings. And that’s good news for the area’s economy as vacation travelers will return more quickly than business travelers. National industry surveys indicate that 84% of travelers plan to take a trip in the next six months, the highest level since the start of the pandemic.

“We were already surprised by what we saw last summer,” said Romy Snyder, the longtime president and CEO of the Wisconsin Dells Visitor & Convention Bureau. “It makes us feel optimistic and hopeful that it will be a better year for the businesses in general.”

Adjustments for the bureau in 2020 included slashing its marketing budget by 50% and having weekly marketing meetings. The plan for 2021 includes returning to 2019 spending levels but adding in more social media campaigns.

The pivots by local businesses in the Dells in 2020 included changing the way they interact with their customers, improvements to facilities that would have been difficult to do with larger crowds, reduced capacities and improved safety protocols.

Over at Paul Bunyan’s Cook Shanty, a staple for over 60 years, its world famous buttermilk donuts are now also being shipped to customers who took a pass last year on a visit.

“This has been the strangest, most challenging, stressful, craziest year we’ve experienced since we opened our doors in 1958,” the company posted on its website in November. “Reflecting on our season, we’ve learned a lot about our business, but mostly that we’re resilient. Our employees were like Swiss Army knives, hopping into any position that needed help in the moment.”

In Door County, the finger of land that separates Lake Michigan from the bay of Green Bay doesn’t rely on youth baseball, hockey, soccer and lacrosse tournaments that bring in families from around the Midwest. Nor does it draw conferences and conventions that fill acres of event space, thousands of hotel rooms and multistory parking garages. There are beaches instead of waterparks, locally owned boutiques and no outlet malls.

That meant tourism spending may have been down by only 20%, according to tourism officials there, where 11 lighthouses dot the peninsula and were among the socially distanced draws last year.

Angela and Chad Luberger’s Plum Bottom Gallery in Egg Harbor had been located in a rural area south of the village since 2007, but in 2019 the couple opened a second location in Egg Harbor to take advantage of the foot traffic.

Chad is a porcelain artist, Angela creates jewelry, and the couple also sell the works of 100 artists from around the country in a variety of mediums. Masks are essential for both customers and employees, and Angela said last fall that she was seeing more families during the week, when compared to past fall seasons. Many are buying art as a way to change up interiors after months of being stuck at home.

“People are still here. They’re coming for the colors and they’re still coming to Door County. We’re only a gas tank away,” Angela Luberger said. “We were expecting and preparing to be down 50 percent and we’re not down as far as we thought. We’re going to make it.”

At the Door County Maritime Museum in Sturgeon Bay, exhibits were moved online and the museum store was actively promoted to encourage online sales of merchandise.

Over at the Leigh Yawkey Woodson Art Museum in Wausau, art kits were created for the local school district to distribute to families enrolled in summer programs, and later on those kits were made available to visitors to the bird-centric museum.

At Old World Wisconsin near Eagle, the state historic site was closed for most of 2020, but in October the gates opened for a “Fall Family Fun Drive,” in which visitors drove along a set route to take in the colors and the villages and farmsteads that date back to the 1800s. Over two weekends, the event drew about 2,500 people.

In Vilas County, Cranberry Fest in Eagle River and the Musky Jamboree in Boulder Junction were canceled. But with more than 1,300 lakes, those venturing Up North had plenty of options. Many also brought their bikes to ride the 45-mile Heart of Vilas County Paved Bike Trail System that winds through stands of pines and hardwoods and connects St. Germain, Sayner, Boulder Junction and Manitowish Waters.

Cindy Burzinski, Vilas County’s director of tourism and publicity for the past 23 years, said while restaurants and some hotels and motels were challenged in 2020, those lodging facilities with kitchenettes and vacation home rentals were heavily booked as visitors sought to get away.

Considering the circumstances, the numbers offer a bright point and an indicator of the impact the outdoors had on the local economy.

“We had a really, very good summer because people could come up and they could social distance comfortably without trying to,” Bruzinski said. “We were promoting the (bike, hiking, ATV and snowmobile) trails that were less used so that they would find less people on them. And because we have 63 trail systems, there are a lot of trails that are lesser used.”

Walworth County saw a 34% decrease in overnight stays in 2020, but in January hotel bookings were off by just 3% when compared to January 2020, a positive trend, according to Stephanie Klett, president and CEO of Visit Lake Geneva and the former state tourism secretary.

The region features lakes like Delavan, Como and Geneva; nature preserves, plentiful outdoor dining opportunities, and in February of this year, Winterfest and the U.S. Snow Sculpting Championship. There’s also the 26-mile Geneva Lake Shore Path that provides up-close views of the stately homes that rim the lake.

“You’re going to feel safe here,” Klett said. “I marveled at our hotels, bed and breakfasts, our inns, our restaurants, our shops, at how quickly they navigated to address the situation in a safe way.”

Masked up and pushing the outdoors, Door County trying to survive

Tourism is down about 20%, much less than expected, but Door County doesn't rely on sporting events, conventions and conferences.

Festivals in the village dedicated to music, Wilhelm Tell, Oktoberfest and the orphaned Swiss girl, Heidi, were all scrubbed in 2020 and businesses are hoping tourists can return later this year.

A first of its kind study commissioned by the state Department of Tourism shows the impact of the COVID-19 pandemic on outdoor recreation and manufacturing in Wisconsin.

Much-needed rain, thunderstorms on the way for southern Wisconsin after warmest day of year

A more active weather pattern will bring the first rain and thunderstorms of April to southern Wisconsin, according to forecasters.

Ossoff reacts after Will Smith production pulled from Georgia

Ossoff reacts after Will Smith production pulled from Georgia

Jesus Fernando was among the lifeguards at Mt. Olympus Water & Theme Park to wear a mask over Memorial Day Weekend last year as Wisconsin Dells was largely quiet due to the pandemic. Crowds picked up as the year progressed, but overall it was a down year for tourism destinations throughout the state. 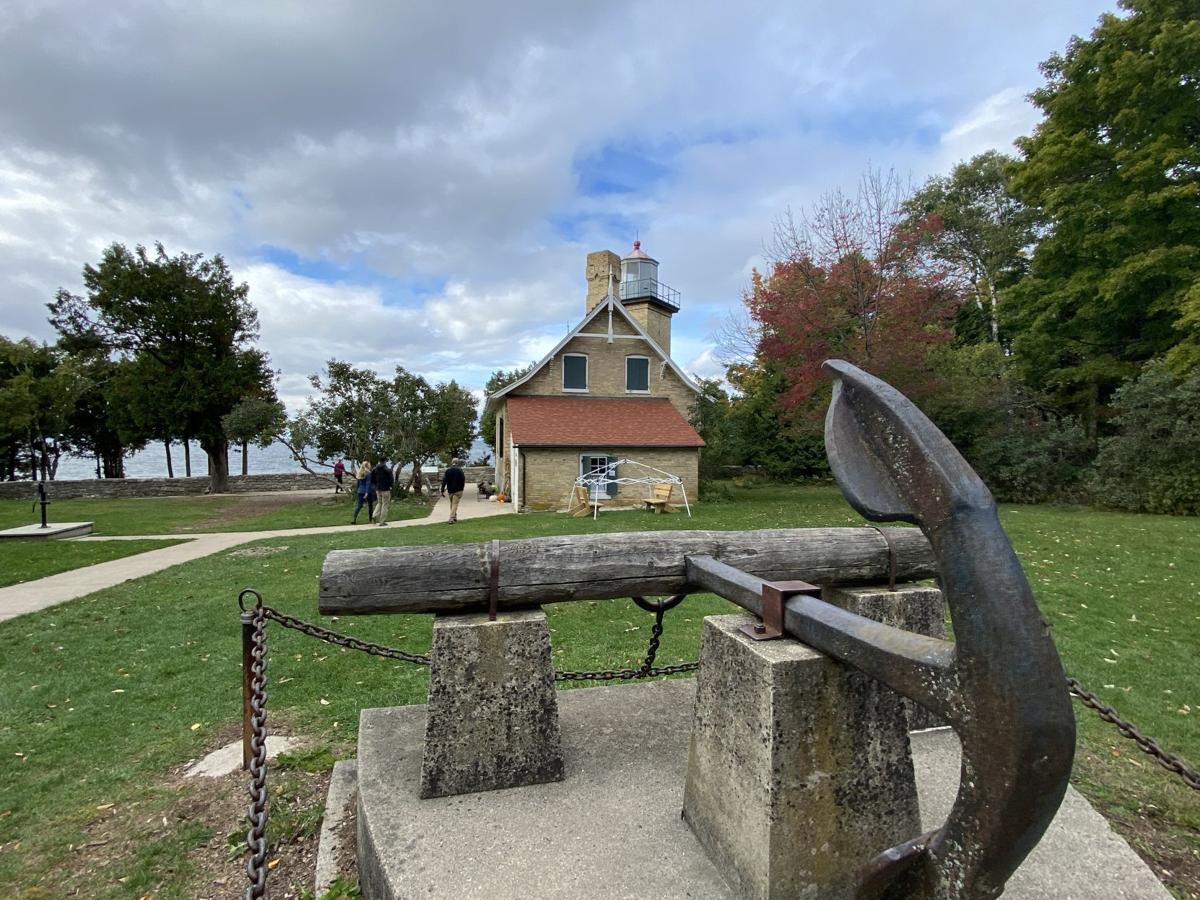 A 1,000-pound anchor rests before the Eagle Bluff Lighthouse in Door County's Peninsula State Park. Families seeking to isolate during the pandemic flocked to the area in 2020 to take in outdoor activities such camping, and visiting the beaches and 11 lighthouses that dot the peninsula.

The outdoor seating area at The Fireside in Egg Harbor was a saving grace for the restaurant since owner Lauren Schar closed the dining room last year due to the pandemic. 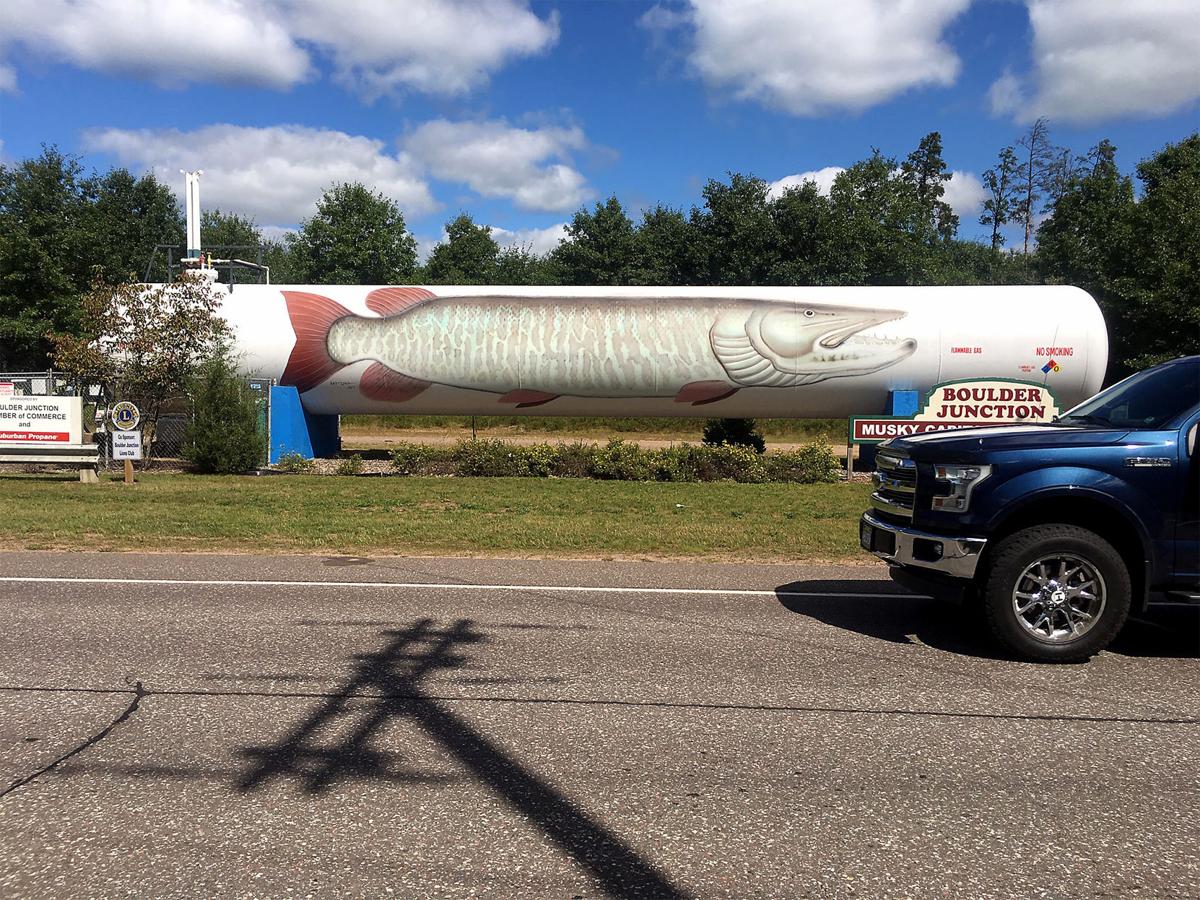 Boulder Junction in Vilas County promotes itself as the "Musky Capital of the World" but the annual Musky Jamboree in August was canceled due to the pandemic. However, many people came to the region to bike, camp, fish and participate in other outdoor activities in 2020. 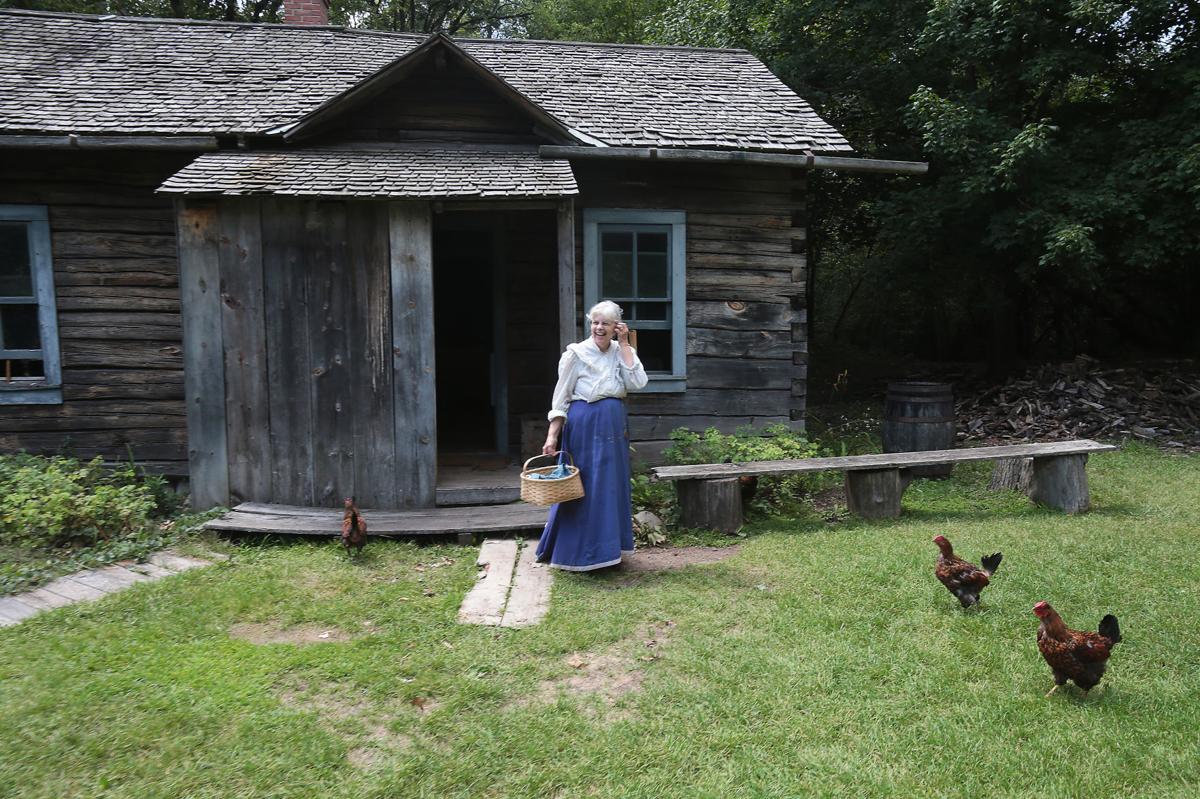 A living history museum that takes visitors back to 1800s Wisconsin, Old World Wisconsin allows visitors to experience everything from life on the farm to classes in a one-room schoolhouse and a visit to the town blacksmith. The destination was closed for most of 2020 but hosted in October an event that allowed visitors to drive through the massive site. 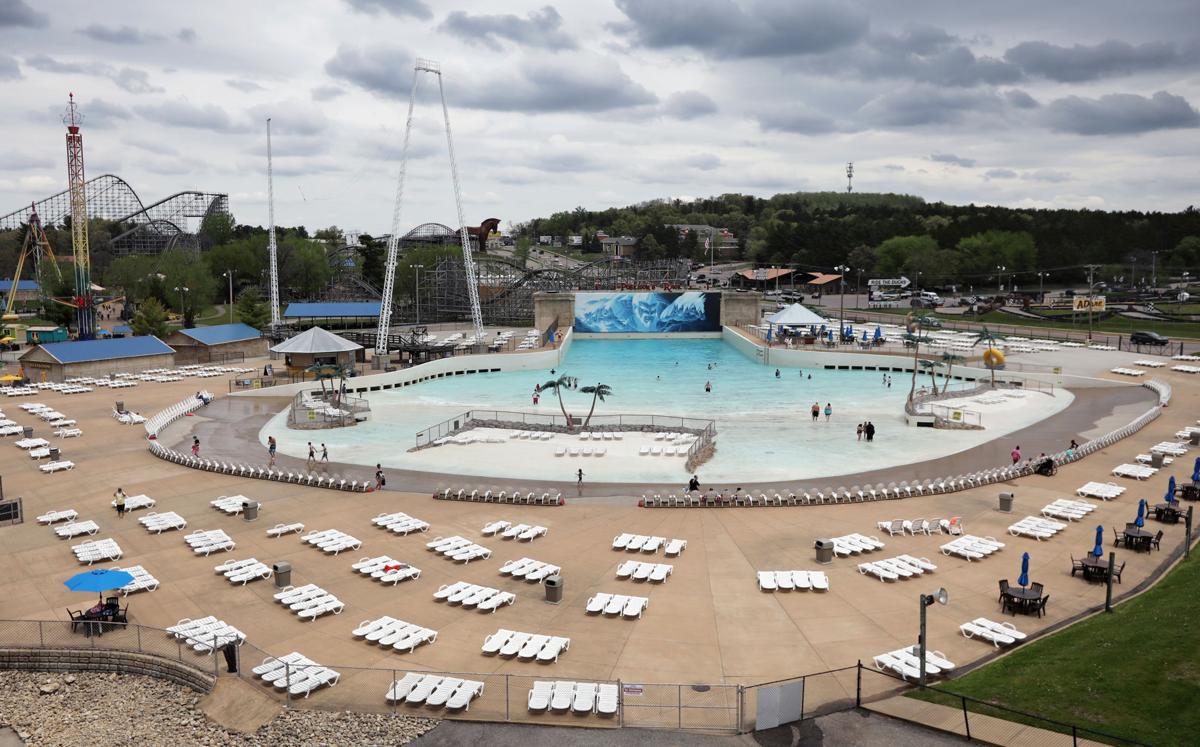 Mt. Olympus Water & Theme Park was the only major resort in Wisconsin Dells to open for the Memorial Day weekend, but had only a minimal crowd. 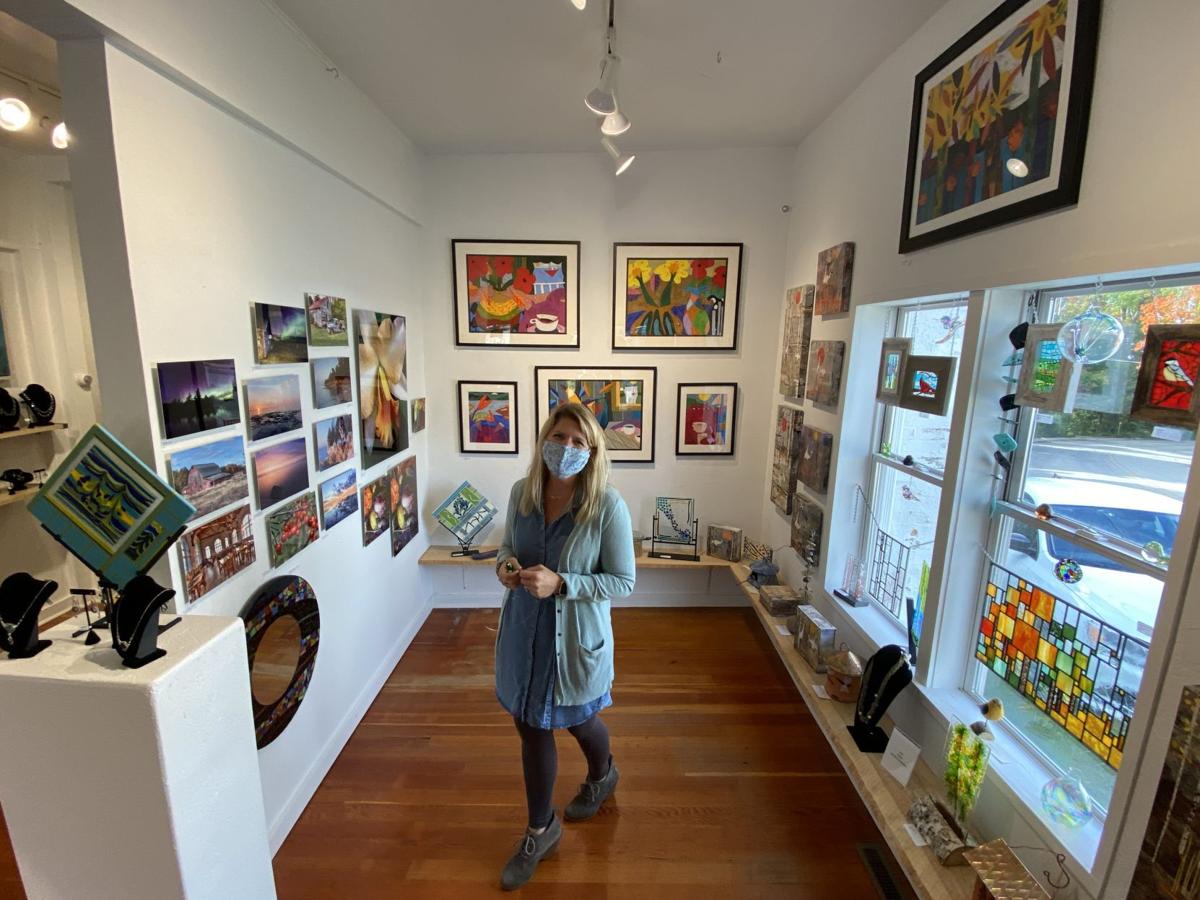 Angela Luberger, a jeweler who co-owns Plum Bottom Gallery in Egg Harbor, said sales were down in 2020 but have not decreased as much as she and her husband, porcelain artist Chad Luberger, had expected.

The sun sets on the Turtle Flambeau Flowage near Mercer, a popular destination for anglers, kayakers and campers. 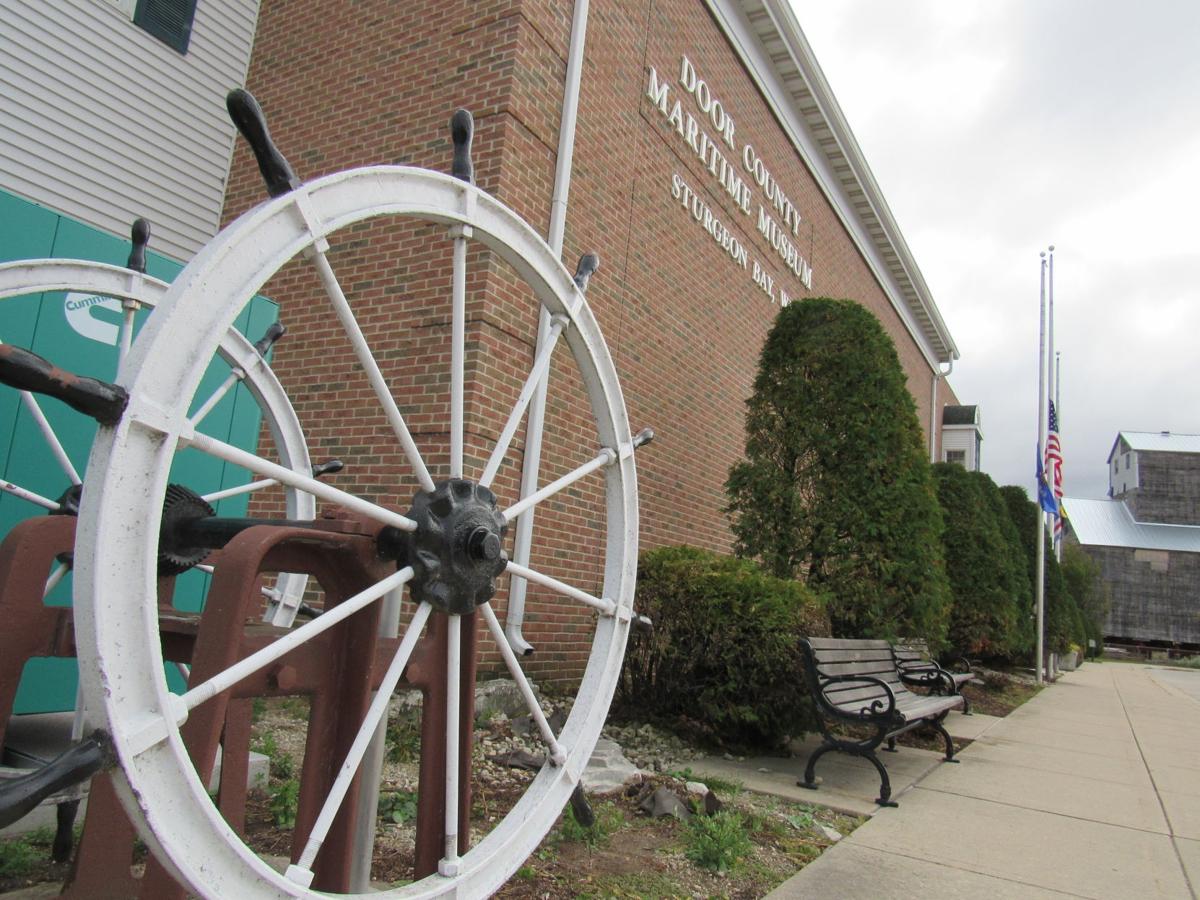 The Door County Maritime Museum in Sturgeon Bay tells the story of the peninsula's maritime history and culture. 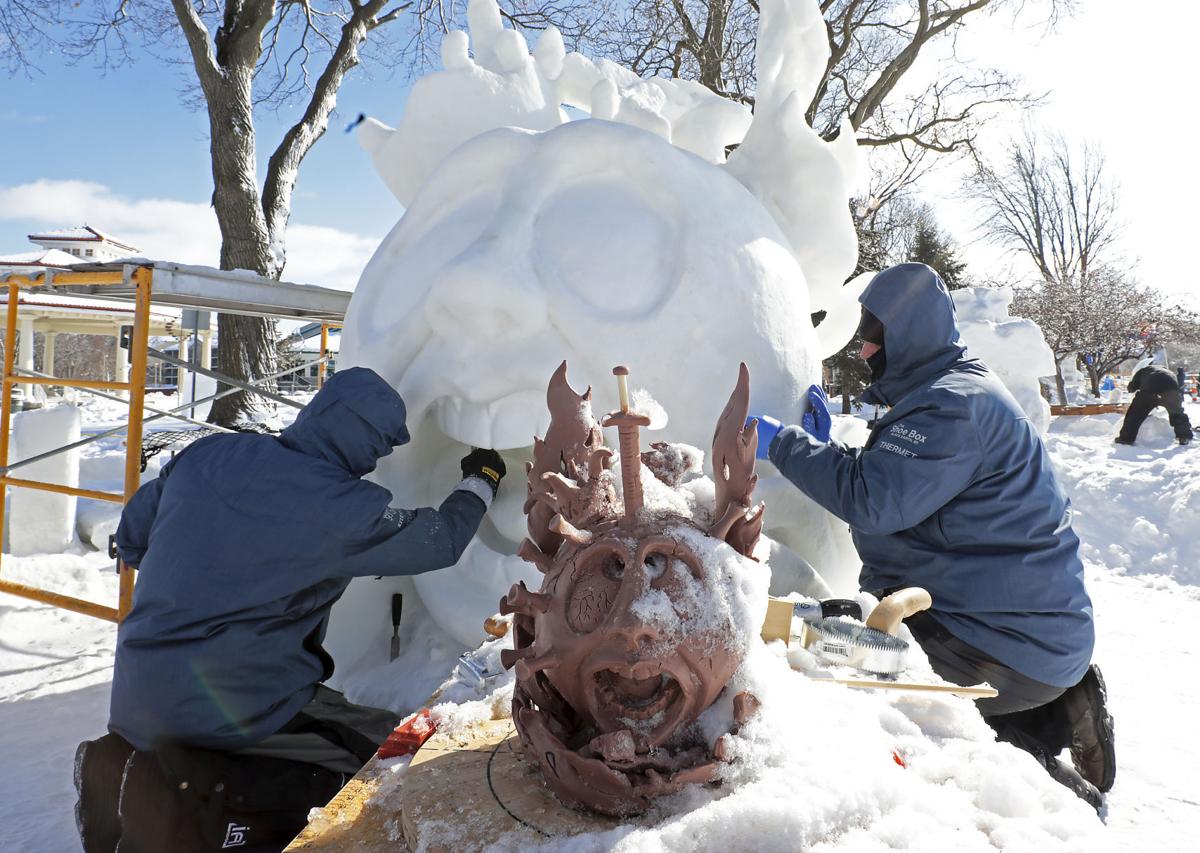 The U.S. National Snow Sculpting Championship in February in Lake Geneva brought members of Sculptora Borealis from Wisconsin who are seen here working in their winning sculpture, "Inoculation," a COVID-19-themed piece that includes a syringe coming out of its head, as depicted in a clay model in the foreground.