The economic reality of a pandemic on one of the state’s leading industries is now official.

None of the state’s 72 counties saw an increase in visitor spending when compared with 2019, according to numbers from the state Department of Tourism obtained by the Wisconsin State Journal.

In Downtown Madison alone, spending fell from more than $300 million in 2019 to just over $100 million, a drop of 62% according to figures released Monday by Destination Madison. Hotels in the central city were hit the hardest as bookings were down 78%.

“These numbers are a hard truth. Dane County tourism was devastated in 2020. Thousands of people in our community, the backbone of our hospitality industry, bore the brunt of a very difficult year,” said Ellie Westman Chin, Destination Madison’s CEO and president. “For the first time in the 49 years our organization has been leading regional hospitality efforts, Dane County has fallen from being the second-biggest generator of tourism revenue for the state. We have our work cut out for us to help the greater Madison area rise back to that level.”

With the dramatic losses, Dane County slipped from second to third in direct tourism spending. Milwaukee County still leads the state but saw a 39.3% decrease in spending to $1.3 billion as events such as Summerfest and Wisconsin State Fair were canceled, the Democratic National Convention was held virtually and no fans were allowed at Milwaukee Brewers games.

Sauk County, home to a large portion of the Wisconsin Dells attractions and lodging, moved from third to second after spending dropped by only 16.3% to $958 million.

But in a separate study commissioned by the Wisconsin Dells Visitor & Convention Bureau and which covers multiple counties that make up the Dells target area, direct visitor spending was down 29.1% to $856.6 million. The number of visitors to the region dipped to 3.52 million compared with 4.9 million in 2019.

“Although there is no making up for those dollars lost, we are looking towards the future with enthusiasm as traveler sentiment continues its positive upward trend,” Romy Snyder, president and CEO of the WDVCB said. “Despite major setbacks, businesses have continued to push forward with new things for 2021. We know there is a lot of work ahead, but we look forward to welcoming visitors back to the destination they know and love.”

Activities such as biking, fishing, camping, paddling and hiking all helped stem the losses for several northern counties. Vilas County, home to over 1,300 lakes and miles of bike trails, saw spending dip by 3.9%, Bayfield County on Lake Superior saw a decrease of 2.7% while Ashland County was down 7.8%. Trempealeau County, which ranks 53rd in spending, saw the smallest decline at 1.9% to $27.4 million.

The overall economic impact of tourism in Wisconsin dropped 22.3% to $17.3 billion while in Dane County the overall impact was down 30.1% to $1.6 billion, according to the numbers from Tourism Economics, which was commissioned by the state to study spending.

The state Department of Tourism normally trumpets its annual spending report and in years past has given the Wisconsin State Journal embargoed data to prepare stories about what are typically positive trends in tourism spending.

But this year the numbers were not released to media by the state, there was no advance notice nor even a press release. Acting Tourism Secretary Anne Sayers has not issued a statement about the numbers and could not be reached for comment. She replaced Sara Meaney, who left the position in November after two years on the job.

On Monday afternoon, Craig Trost, communications director for state Tourism, said the department has “taken a much different approach than in previous years,” he wrote in an e-mail. It stressed that state Tourism in 2020 distributed nearly $12 million to destinations through recovery grants, with more than $750,000 going to Dane County, and that a survey by Longwoods International showed that 87% of travelers are planning a trip in the next six months.

“Just like a traveler participating in a Wisconsin road trip, we are focused on the road ahead of us, not the road behind us,” he wrote. “However, we acknowledge that the pandemic impacted tourism spending in communities differently. While we are focused on inspiring the recovery, we defer to our local destinations to tell their unique economic story this year.”

To put the Dane County numbers in context, the $618 million in losses alone in direct spending is more than the total 2020 spending in 69 of the state’s 72 counties. In Dane County, more than 6,700 people out of 22,600 people in the hospitality industry lost their jobs in 2020, with 2,000 of those losses in the Downtown. Tax revenue associated with tourism spending in the county fell by $57 million to $114 million, a 33% drop.

“The hardest part of seeing these numbers is knowing how many thousands of local people are affected by this loss. We know the money visitors bring to Dane County finds its way into businesses they never visit, feeds children they never meet and supports nonprofits whose services they never need,” said Rob Crain, chair of Destination Madison’s board and director of business marketing and engagement for Madison Gas and Electric.

“The effects of the pandemic are by no means over, and many hospitality businesses are still suffering tremendously.”

Phillip Mattsson-Boze, president of the Greater Madison Hotel & Lodging Association, said the numbers were expected and not surprising. Recovery will take years.

“Downtown markets have been hit significantly harder over the course of the pandemic. Downtown hotels have definitely taken the brunt of it in Madison and across the country,” said Mattsson-Boze, who doesn’t expect a full recovery for the lodging industry until 2024.

The tour from June 18-27 features 40 homes throughout Dane County and one on Lake Wisconsin in Sauk County.

Tourism spending increased 1% for the month when compared with 2019 while other surrounding states saw tourism still below that of September 2019.

Tips for managing ADHD while working from home

Tips for managing ADHD while working from home 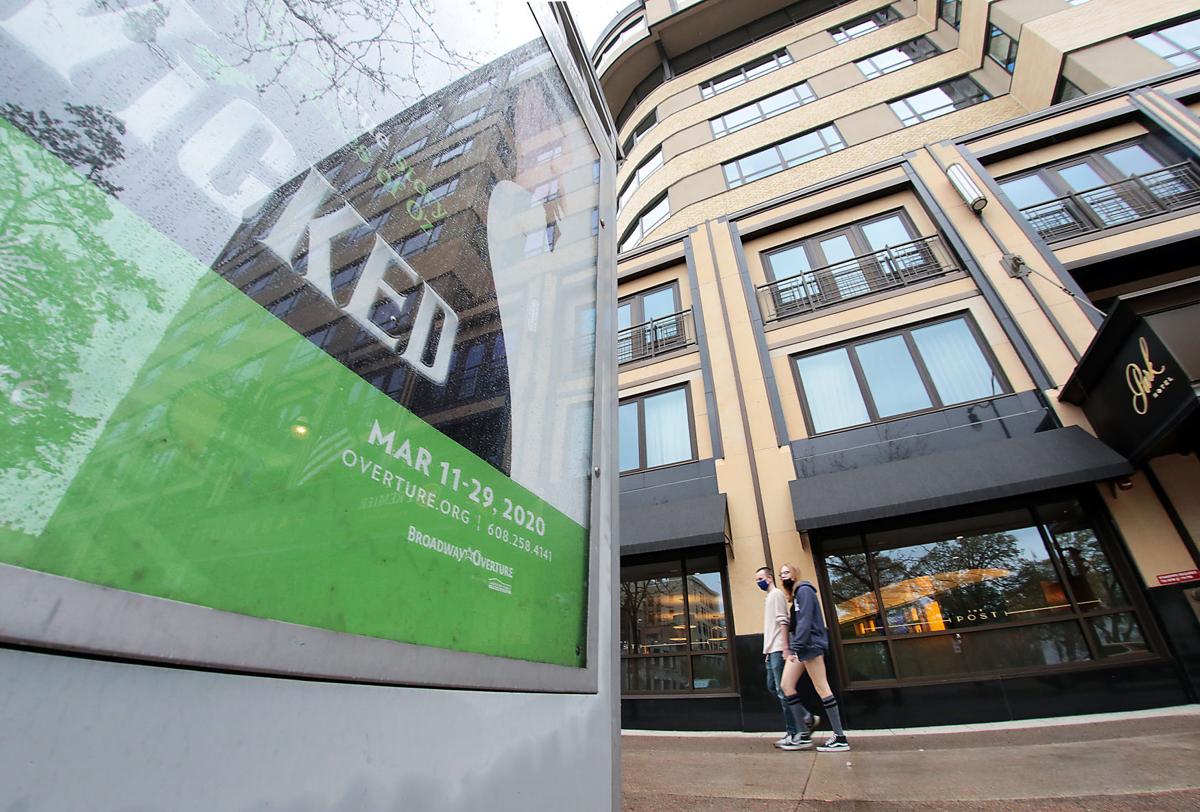 A promotional poster advertising last spring’s truncated local run of the musical “Wicked” remains on display in an events kiosk outside the Park Hotel on Capitol Square. Madison hotels, especially those Downtown, were largely empty in 2020 as the pandemic halted business and leisure travel, sporting events, concerts and plays. 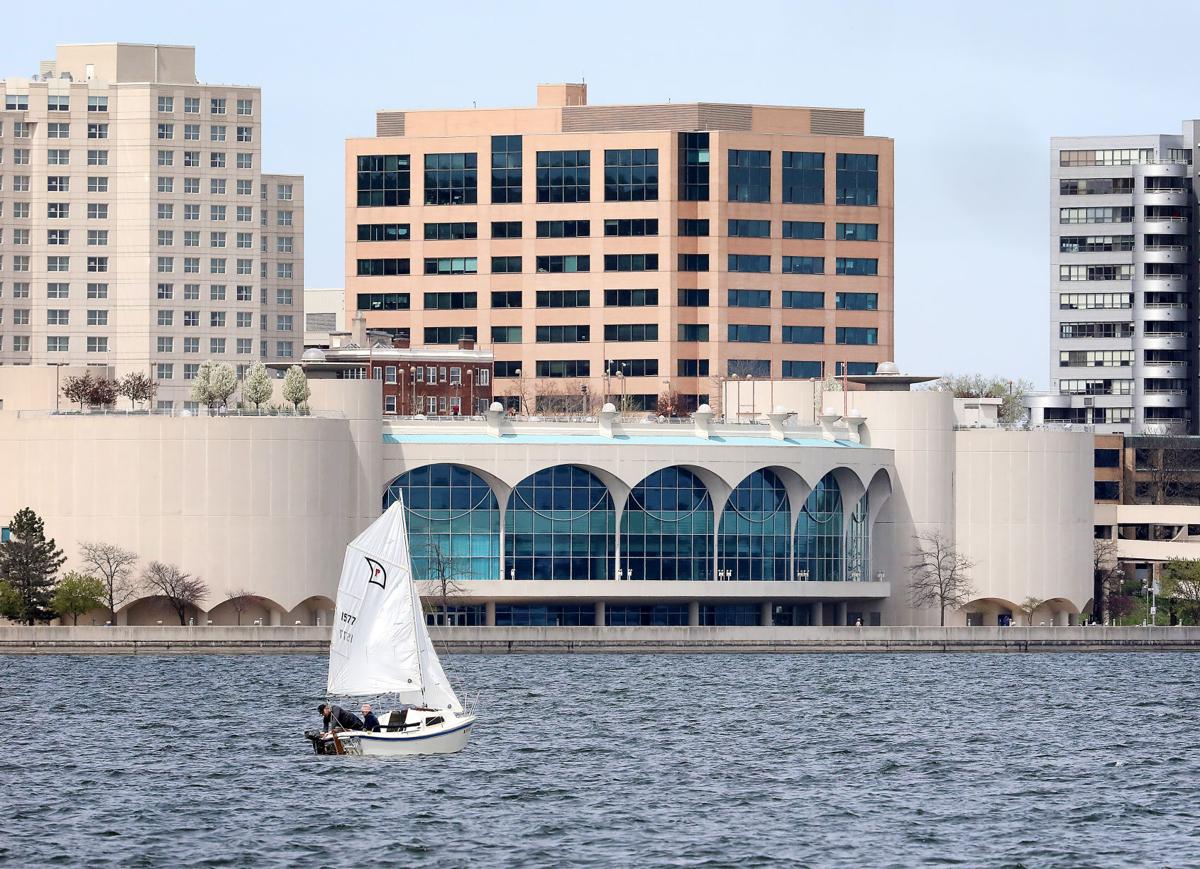 The Monona Terrace convention center in Madison was quiet in 2020 along with most other tourism-related businesses in Dane County, where tourism spending last year was down 43%, the steepest decline of any county in Wisconsin. 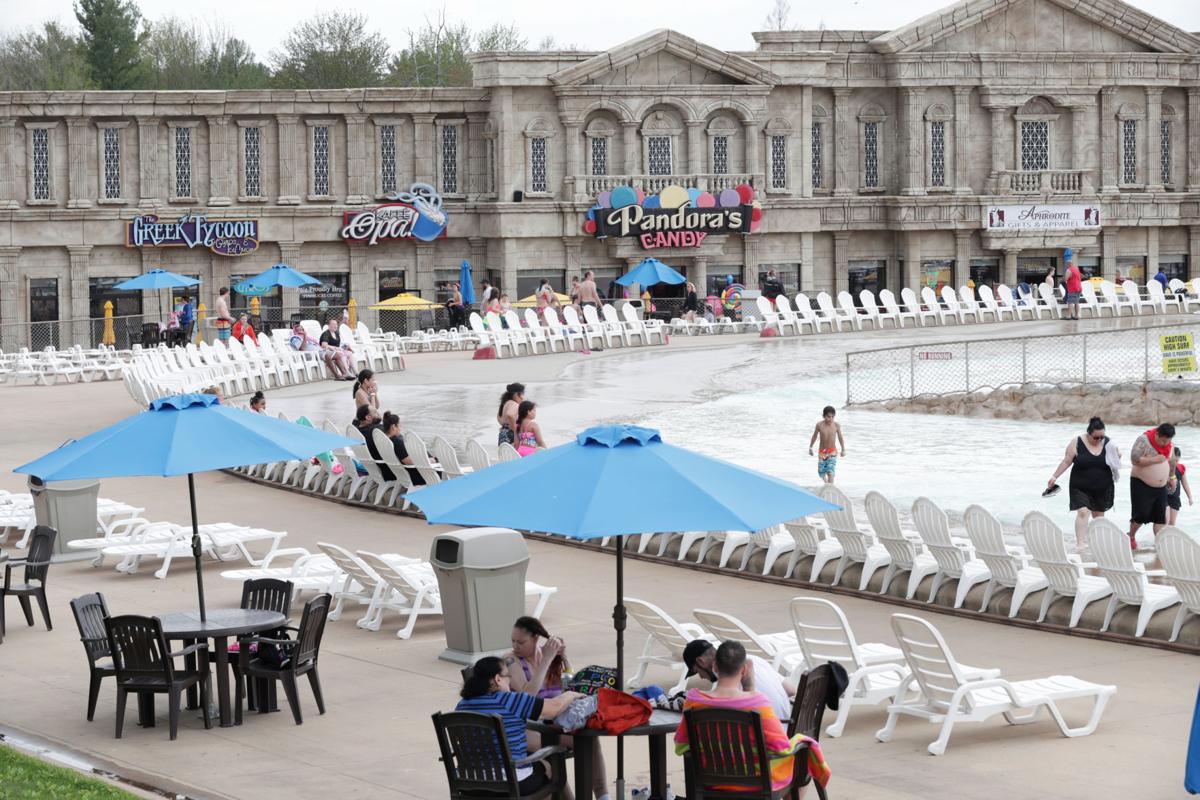 The wave pool area at Mt. Olympus Water and Theme Park in Wisconsin Dells had few guests on the Saturday of Memorial Day weekend in 2020. Tourism spending in the Dells was down 29.1% in 2020 when compared to 2019. 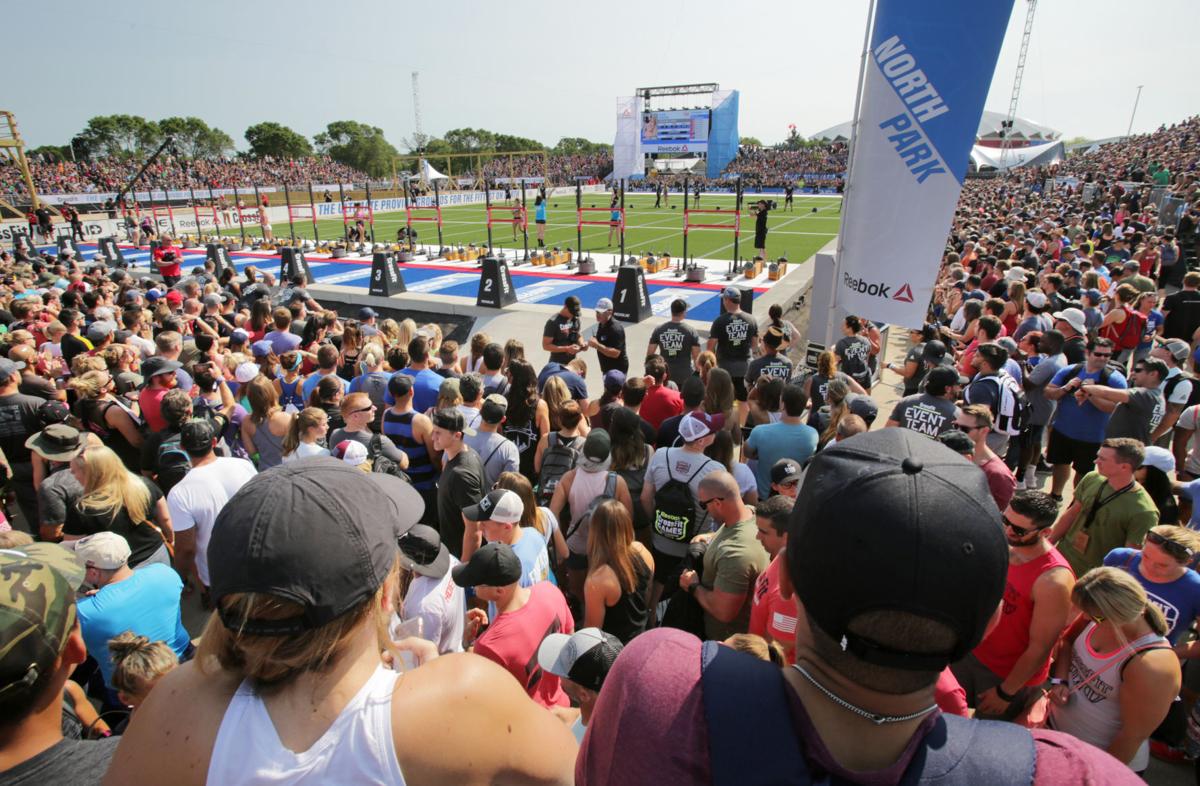 A large crowd watches the women's Strongman's Fear event during the 2017 CrossFit games at Alliant Energy Center in Madison. The 2020 competition was cancelled due to the pandemic, but is slated to return in late July. 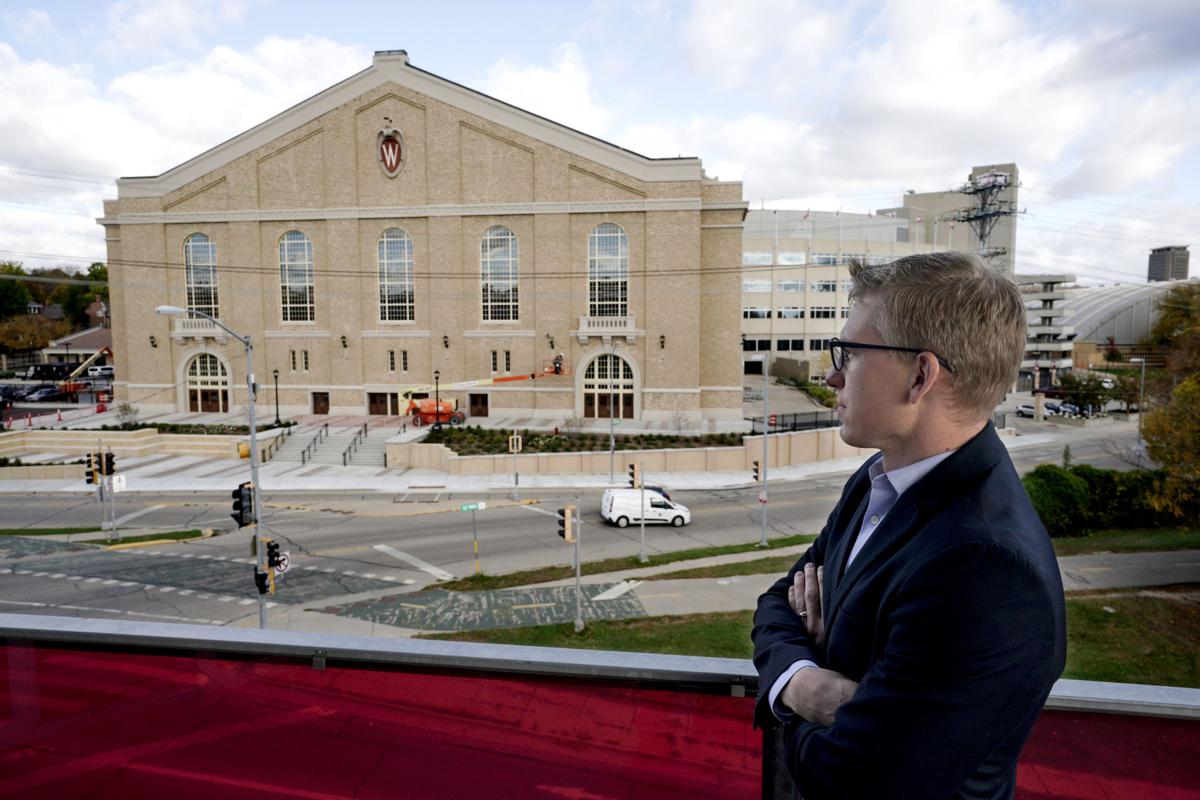 The HotelRed has been closed since March 2020 and is now up for sale. General Manager Phillip Mattsson-Boze is also president of the Greater Madison Hotel & Lodging Association. Hotel spending in Madison's downtown was down 78% in 2020. 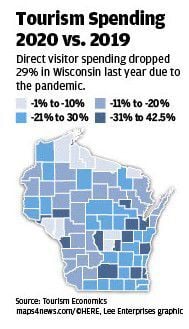