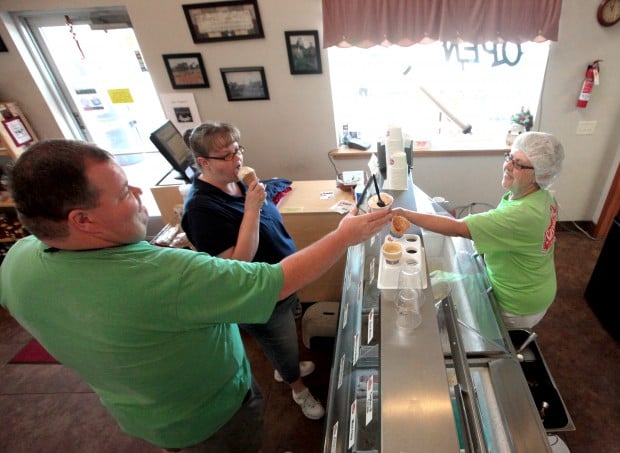 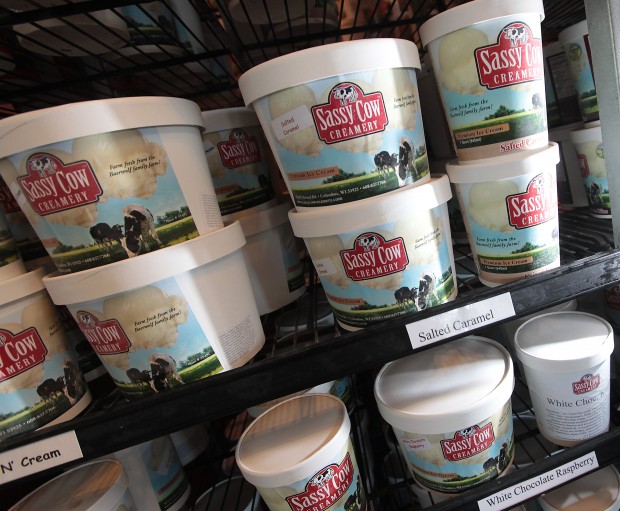 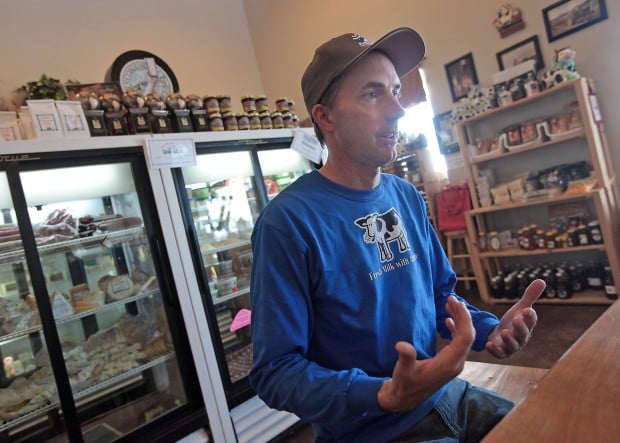 James Baerwolf and his brother, Robert, added the Sassy Cow business to their dairy farm five years ago. The creamery's products are now sold in 250 grocery stores, restaurants and coffee shops in Wisconsin and Illinois.

TOWN OF HAMPDEN — One lick of the smooth, frosty vanilla ice cream made Danny and Donna Poggioli’s 15-hour drive from New York City temporarily disappear. Finally, they felt like they were in Wisconsin.

“This is what we came for. The back country roads and some awesome ice cream,” Donna Poggioli said outside the Sassy Cow Creamery’s store and bottling facility in Columbia County between Sun Prairie and Columbus.

Since opening in 2008, Sassy Cow’s grass-roots beginnings and organic focus have attracted swarms of tourists and local buyers, making its “milk with an attitude” one of the most popular dairy products in the state. The business will celebrate its fifth anniversary with an event Saturday.

Reaching the milestone wasn’t easy for brothers and co-owners James and Robert Baerwolf, who have farmed the fields around Sassy Cow their whole lives. They placed a $1.5 million bet on themselves, adding a milk processing facility to their farm despite having little experience in processing or marketing.

“We were basically about to do something that we had never done before and didn’t have the knowledge for,” James Baerwolf said.

A number of family farms have transitioned to on-the-farm milk processing and direct marketing to compensate for the volatility of the bulk milk market, said Tom Kriegl, a farm financial analyst with the UW-Madison Center for Dairy Profitability. Operating a dairy farm by itself is a big challenge, let alone the extra complexity of making and marketing the finished product.

“A lot of time, skill and effort is required to match production with the demand of the product,” Kriegl said.

To keep up, the Baerwolfs increased their herds from 400 to 500 traditional cows and from 100 to 250 organic cows since opening Sassy Cow.

At first, the Baerwolfs showed off their products at local food festivals and worked solely with Soderholm Wholesale Foods in Sun Prairie to distribute their products to a few local grocery stores and restaurants. Now, with the additional help from 25 employees and marketing director Kara Kasten-Olson, Sassy Cow works with eight food distributors that deliver their milk and ice cream to 250 grocery stores, restaurants and coffee shops throughout Wisconsin and Illinois.

Sassy Cow sold $4 million in products last year and continues to market its “milk with an attitude” brand and increase its variety of about 75 ice cream flavors.

Sassy Cow’s rapid rise has been pushed along by a wave of interest in local and organic products.

“They were good farmers to start with, and their business and marketing skills are what made for success,” said UW-Madison dairy economist Bob Cropp. “Sassy Cow is in a unique market, and they have been able to capitalize from it.”

“It’s the biggest blessing to be close to Madison. People are receptive and interested in local farms,” Baerwolf said. “When people take interest in what they’re eating, that’s good for farmers, good for the product, and allows businesses like us to succeed.”

“We see customers put other products down and pick this one up because it’s right down the road. People are willing to spend a bit extra to support the local economy,” Meier said.

That’s one of the reasons Monty’s Blue Plate Diner on Atwood Avenue switched all of its milk, cream and ice cream to Sassy Cow in 2009, said Joey Connaughty, managing partner of Food Fight Restaurant Group. Monty’s goes through 20 to 25 three-gallon tubs of the Baerwolfs’ ice cream every week.

“It feels good to bring awareness to our customers about our local food connection,” Connaughty said. “The best part is our one-on-one, personal, face-to-face relationship that we have with these guys.”

Where: W4192 Bristol Road, off Highway N between Sun Prairie and Columbus

Sassy Cow Creamery outside Columbus is celebrating its fifth year in business.

James Baerwolf and his brother, Robert, added the Sassy Cow business to their dairy farm five years ago. The creamery's products are now sold in 250 grocery stores, restaurants and coffee shops in Wisconsin and Illinois.