Republican groups are calling for the restructuring of Wisconsin’s convoluted K-12 education funding system — including additional funding for students living in poverty — as education becomes a focal point heading into the 2022 midterm elections.

The idea that low-income students need more resources to succeed has long been championed by academics, public school advocates and Democratic Gov. Tony Evers, who in 2010 proposed an overhaul of the state’s now 30-year-old school funding system. Republicans have dismissed Evers’ so-called “Fair Funding” proposal as too expensive. Instead, they have focused on distributing an equal amount of new state aid to each student regardless of background while expanding the state’s private school voucher programs.

The conservative Wisconsin Institute for Law and Liberty provided the Wisconsin State Journal with a new report calling for a more granular funding model for funding K-12 schools that focuses on the individual financial needs of each student, rather than each district — a concept similar to a proposal put forth by a statewide bipartisan Blue Ribbon Commission on School Funding in 2019.

“There’s something happening across the country, so I think the renewed interest by conservatives is reflective of where voters, taxpayers, moms and dads are,” WILL director of education policy Libby Sobic said. “Here in Wisconsin, school finance is always going to be a barrier (to achieving education reform) that we’re going to butt up against unless we tackle it.” 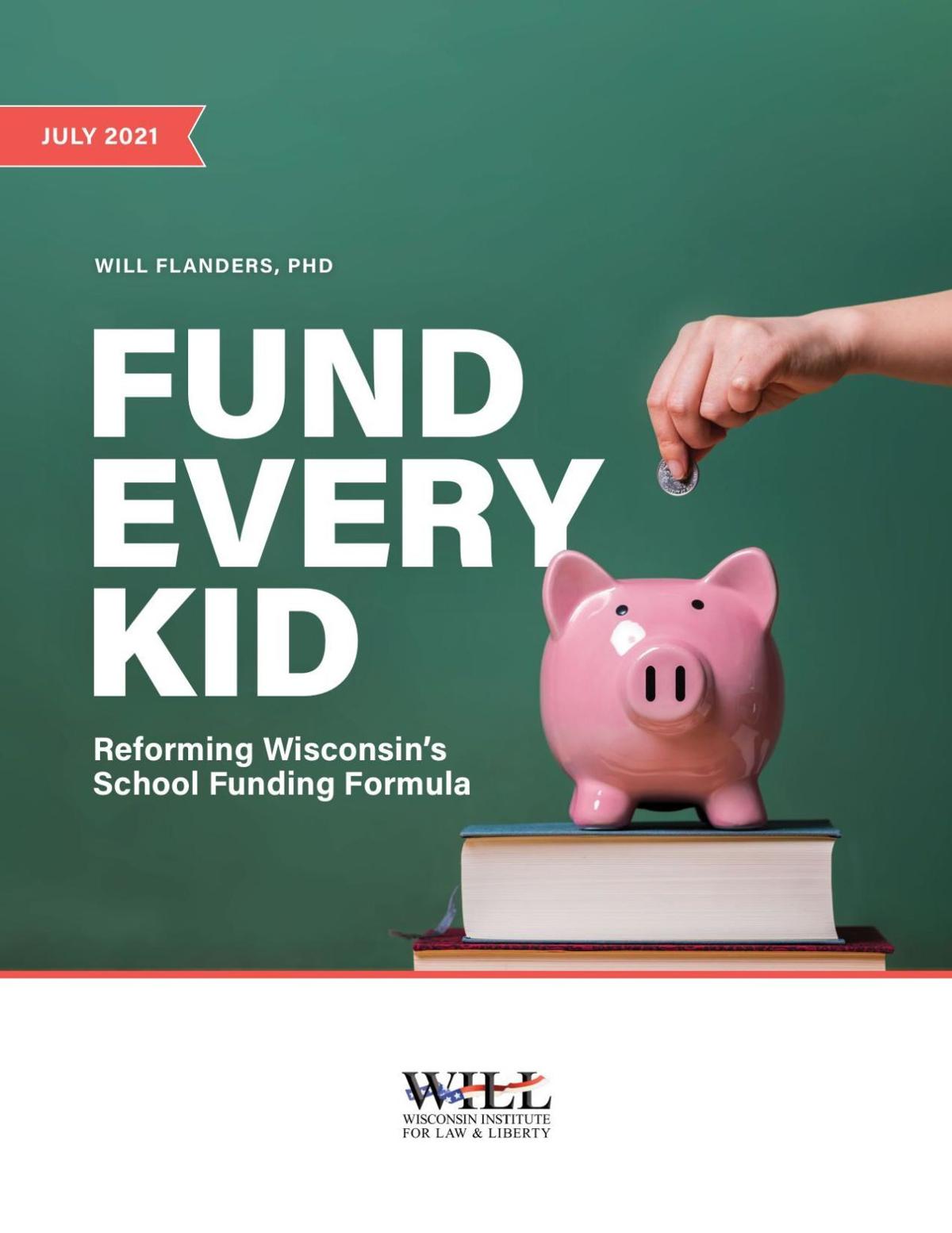 Sobic said the current state funding model suffers from “a lack of both efficiency and effectiveness of funding because the state treats every child’s value based off of the door they walk through.”

The state distributes general school aid using a formula meant to equalize districts based on their relative property values and offers supplemental aid in categories such as poverty, rural transportation, English language learners and special education.

Through the report, conservatives appear to be amending the more egalitarian approach that former Republican Gov. Scott Walker described as a “voucher in every backpack” and applying principles that liberals have called for to achieve greater student equity.

Wisconsin has long had one of the worst racial and socioeconomic achievement gaps in the nation. On the 2019 National Assessment of Educational Progress, the gaps between the percentage of white students and Black students in Wisconsin who scored proficient or better on the 2019 tests ranged from a 31-point difference in fourth-grade reading to a 39-point gap in fourth-grade math, the worst in the nation. Black students in the state are disproportionately low-income.

Sobic said the change in approach is part of a national movement led by groups such as ExcelinEd, chaired by former Florida Gov. Jeb Bush; the American Federation for Children, an organization that focuses on expanding voucher and charter schools; the American Legislative Exchange Council and the Reason Foundation among others.

More than a dozen states have passed education funding changes in the past year, according to the National Conference of State Legislatures.

“We’ve seen a lot of organizations starting to say ‘the weighted student funding model is the way to go.’ The other reason we’re really driven by this is that we really like the idea of continued education reform and, in order to achieve that, the money has to follow the students,” Sobic said. “On both sides of the aisle there is still a reaction to parents struggling with the pandemic and what it did to education.”

The Republican focus on education issues comes as the party seeks to rebuild after statewide losses in 2018 and 2020. The period coinciding with the presidency of Donald Trump saw suburban women flee the party, as evidenced by Democratic legislative gains in suburban Milwaukee.

Education was the most contentious issue in the recently passed 2021-23 state budget, with Republicans increasing funding for public schools by less than a tenth of what Evers had requested. Evers ultimately signed a Republican budget that pumped hundreds of millions of new dollars into the state funding formula, but because of state-imposed revenue limits, it effectively will lower property taxes rather than add money to district budgets.

The budget also left more than $1.6 billion of taxpayer money uncommitted, which Republicans have said they intend to use in the next biennial budget for a much larger increase in education funding.

Currently each student who receives a private school voucher gets between $8,300 and nearly $9,000. Public school districts are limited by the state to having between $10,000 and $24,000 to spend per student, depending on the district and not counting federal funds and certain other state aid programs.

Julie Underwood, a member of the blue ribbon commission and president of the liberal Wisconsin Alliance for Excellent Schools, pushed back against WILL’s effort, calling it a Trojan horse to get more money for vouchers.

“There’s not much about a weighted formula (in the report),” Underwood said. “There’s not even a suggestion of how many categories would be weighted and what levels they would be weighted at. … This is not about changing the formula to weight for student needs. This is all about fully funding independent charter schools and vouchers.”

Tony Evers has repeatedly called for a new funding system to address student needs while Scott Walker has focused on freezing property taxes.

Republicans say their plan to give $408 million to school districts without increasing their ability to spend it will qualify the state for $2.3 billion in federal COVID funds.

MTV Cribs is getting a reboot

MTV Cribs is getting a reboot