The Madison-based 4th District Court of Appeals sent the lawsuit, brought by Wisconsin Manufacturers and Commerce against Gov. Tony Evers’ administration, back to circuit court with orders to dismiss it.

According to the state Department of Justice, the state can release the records in question once the court-imposed injunction is lifted, a process which involves a 30-day lag to give WMC and other business groups the chance to appeal to the Wisconsin Supreme Court, which they have vowed to do. The Wisconsin Supreme Court could prevent the release of the records if it takes up the case. 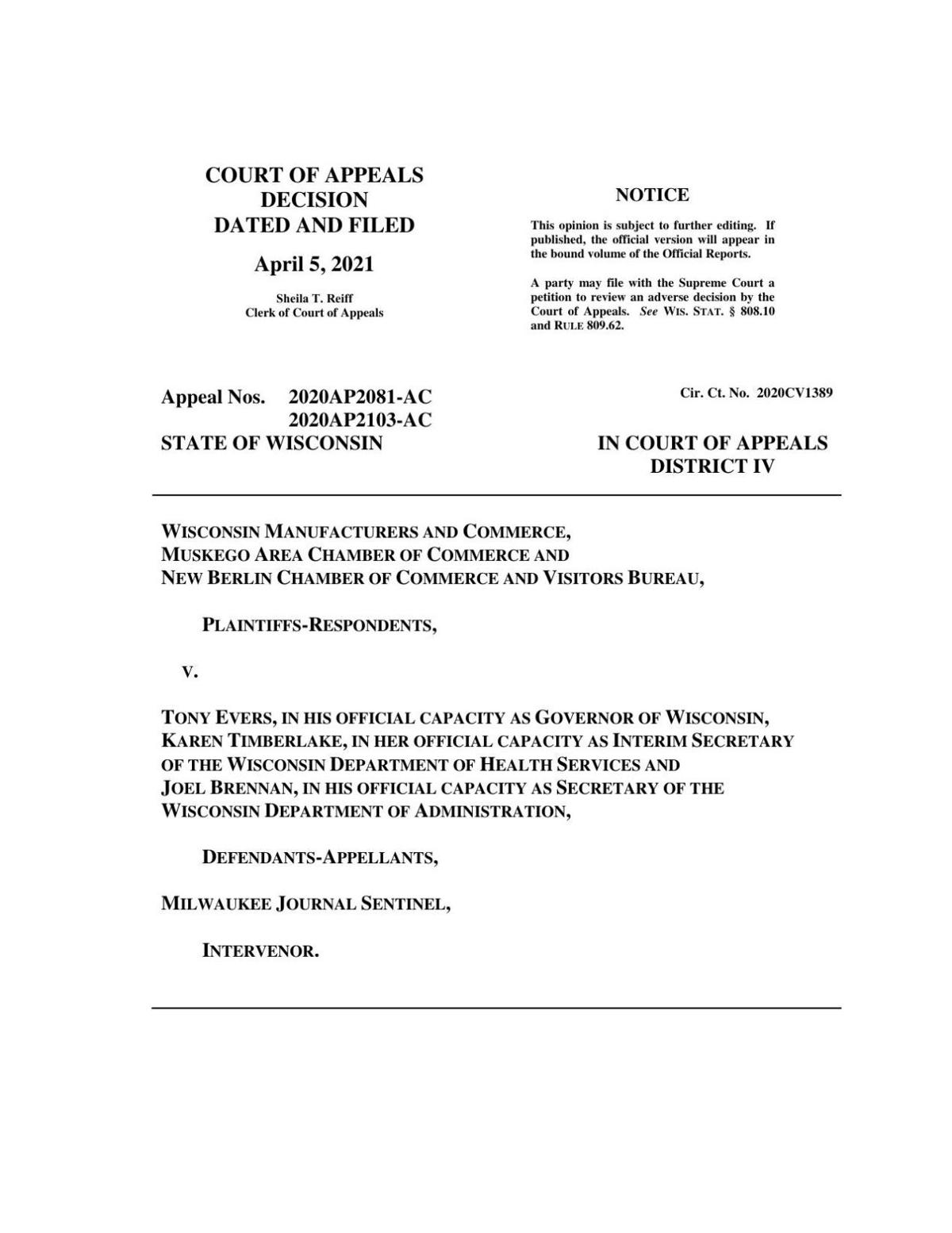 “We are disappointed with the court’s decision, but thankfully the lower court’s injunction still remains in place and will for the foreseeable future. In other words, the lists will continue to remain confidential while we pursue relief in the Supreme Court, which we will,” said Scott Manley, WMC Executive Vice President of Government Relations.

The case is one of the most notable public records cases during the COVID-19 era in Wisconsin, and pits businesses’ right to privacy against the public’s right to information. The appeals court panel involved in the case consisted of Judges Michael Fitzpatrick, Brian Blanchard and JoAnne Kloppenburg.

The state Department of Health Services since last summer had planned to release the names of more than 1,000 businesses with more than 25 employees where at least two workers have tested positive for COVID-19. That prompted an outcry from Wisconsin businesses, which said releasing such information to the Milwaukee Journal Sentinel and other media outlets that requested the information, including the Wisconsin State Journal, would have severe impacts on companies already struggling through the pandemic.

Gov. Tony Evers’ administration briefly reversed course, but the governor in the fall told reporters the administration planned to release the information in the near future, prompting legal action.

Wisconsin Manufacturers and Commerce, the state’s largest business organization, along with the Muskego Area Chamber of Commerce and New Berlin Chamber of Commerce and Visitors Bureau, filed a lawsuit in Waukesha County Circuit Court against Evers, then-Health Secretary Andrea Palm and Administration Secretary Joel Brennan, seeking to block the release of business names. The business groups allege the information they want blocked is derived from diagnostic test results and the records of contact tracers, and that such information constitutes patient health care records that must be kept confidential.

Attorneys for the state said the records contain no personal information but instead aggregate the number of reported cases associated with businesses. The appeals court panel referred to that fact as one of the reasons why it sided with the state and the Milwaukee Journal Sentinel. Kloppenburg wrote for the panel that remanding the case for dismissal was appropriate because WMC and others failed to show they have a legally protectable interest justifying concealment of the records. “We are not persuaded that the alleged harm to the reputations of the Associations’ member businesses could constitute an injury contemplated by these statutes, because the statutes are focused on individual patients and their health care records,” Kloppenburg said.A Waukesha County judge issued a five-day temporary restraining order preventing the state from releasing any business information. In December, the judge again extended a restraining order preventing the state health department from releasing the information.

An Evers spokeswoman didn’t respond to a request seeking comment.

A former Milwaukee County sheriff’s deputy accused of driving through a red light and causing a crash that killed a man was sentenced Monday to six months in jail and two years of probation.

Another day of near-record warmth for southern Wisconsin could bring a third straight day of 2021 highs for Madison, before showers and thunderstorms on Wednesday end a dry stretch, according to forecasters.

The groups allege the information they want blocked constitutes patient health care records that must be kept confidential.

WMC filed the lawsuit in 2020 after the state announced plans that summer to release information pertaining to positive COVID-19 cases at businesses in order to comply with public records requests from media outlets.