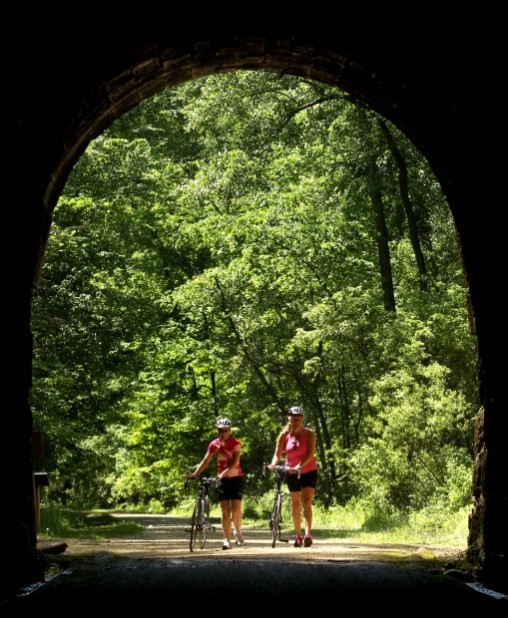 Several long tunnels carved through the hills are part of the appeal of Wisconsin's Elroy-Sparta State Trail. 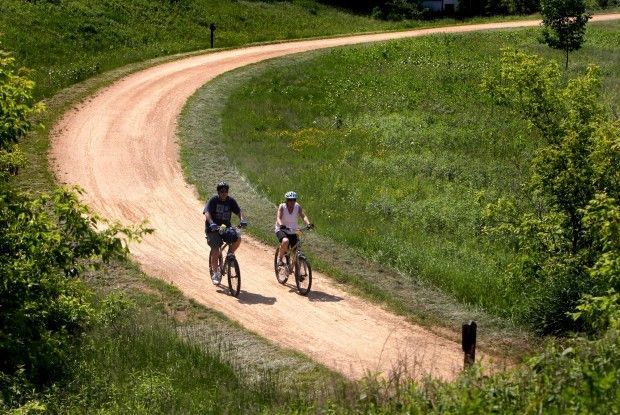 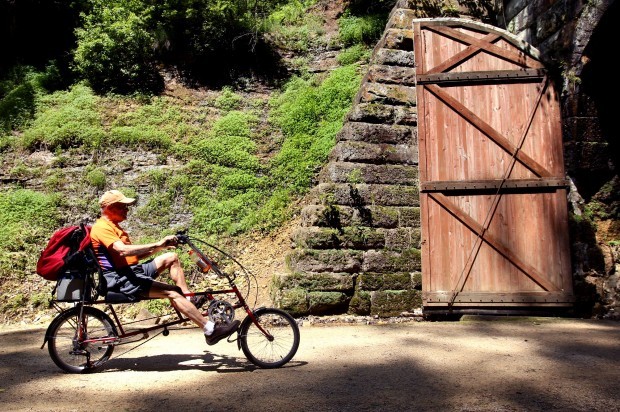 Bikes of all sorts do well on the mostly flat and hard-packed crushed limestone surface of the Elroy-Sparta State Trail.

Spend a day on the Elroy-Sparta State Trail and you’ll ride through as much history as scenic countryside. Just remember to bring a light. You’ll need it to see your way through the railroad tunnels that pierce the region’s bluffs.

Opened for use in 1966, the trail is considered the nation’s first rail-to-trail conversion, using more than 32 miles of a rail bed that once connected cities such as Sparta and Winona, Minn., to eastern markets and spurred development of numerous small communities along the way that now offer wayside food and lodging for trail users.

“They call it the granddaddy,” said Pam Strike, who works at the trail headquarters in the former rail depot in Kendall. “The grandad of the trails.”

Working at the trail headquarters, Strike meets people who come from Madison, Milwaukee and Illinois, and as far away as Europe and Australia, just to bike the trail.

Sue and Chad Gassmann of Milwaukee checked out the trail online, and when they were in Wisconsin Dells decided to tack on a couple of days in Wilton to enjoy the trail.

Still getting into biking, Sue said she prefers the comfort of trail riding to being on the road.

Though used by more than 60,000 cyclists each year, cows outnumber people along its route through picturesque countryside and five communities.

Winding through rural Monroe and Juneau counties, the trail links to the La Crosse River State Trail to the west and the 400 State Trail to the east, creating more than 100 miles of contiguous trail between Trempealeau and Reedsburg. Communities along the trail offer food, lodging and camping facilities.

The crushed limestone surface is hard-packed, making it accessible for just about any type of bicycle, though most riders favor fat-tire cruisers. For those who don’t have their own ride, bikes are available to rent for $19 a day at the Kendall headquarters.

Exhibits in the small trail museum in Kendall document the railroad and the towns — Wilton, Kendall, Norwalk — that served its crews.

Completed in 1873, the Chicago Northwestern Railroad was the second rail line to the burgeoning city of Sparta, where the population doubled in less than two decades. It formed a 126-mile link between Madison and Winona, and required three tunnels through the bluffs to maintain the maximum

Located between Norwalk and Sparta, Tunnel 3 is the longest at 3,810 feet — more than three-quarters of a mile — carved by hand through the seeping rock walls.

Riders can visit the ghost town of Summit, where workers settled during the three-year construction and which later served as a mail stop until free rural delivery came along in the 1900s. The eight houses are gone, but the stone foundations remain.

At the other end of the tunnel, weary travelers can stop by Tom Cordner’s place for a cold drink — or a spare flashlight — on days when he’s open. Other times they’ll see a “gone bikin” sign.

“It’s just something I do for a hobby,” said the retired furniture maker. “There’s no profit in it. I just like to talk to people.”

Cordner, 65, lives next the trail in the house where he grew up. He remembers back then, when his grandfather worked for the railroad, going down to talk to the hobos who made camp nearby.

These days, neighbors come by and set up chairs in his yard to chat with people off the trail.

The Elroy-Sparta State Trail State stretches 32 miles along the abandoned Chicago & North Western Railroad bed, passing through three tunnels along the way. Trail pass are required for riders 16 and older and cost $4 per day. A $20 annual pass also is available. Bicycle rentals and concessions are available at the trail headquarters in the old Kendall Depot in the village of Kendall, which is open May 1 to Oct. 31. On the Web: elroy-sparta-trail.com.

Keeping your jack-o’-lantern fresh through Halloween

Times when it's best to use a debit card

Times when it's best to use a debit card

Need to get away?

Several long tunnels carved through the hills are part of the appeal of Wisconsin's Elroy-Sparta State Trail.

Bikes of all sorts do well on the mostly flat and hard-packed crushed limestone surface of the Elroy-Sparta State Trail.