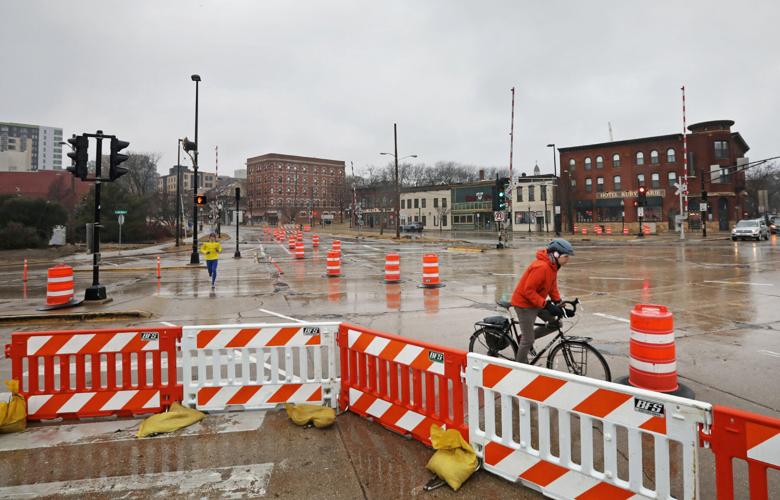 The city is starting a complete reconstruction of South Blair Street from East Washington Avenue to John Nolen Drive, including the "hairball" intersection with East Wilson and Williamson streets. 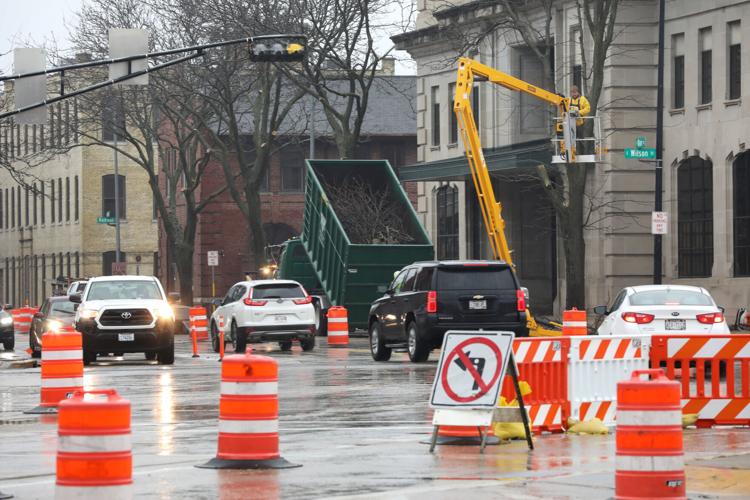 The reconstruction of South Blair Street is expected to run through November.

At long last, the city is moving to fix the infamous “hairball” intersection at John Nolen Drive, South Blair, East Wilson and Williamson streets Downtown as part of a larger road reconstruction project.

But long-awaited improvements funded by the city and state will require some inconveniences for motorists, bicyclists and pedestrians while work is being done through November.

The project is a full reconstruction of South Blair Street from East Washington Avenue to John Nolen Drive, including new left turn lanes at the clogged and dangerous hairball intersection, dubbed so due to the multiple crossings, signals, railroad tracks and the lack of dedicated left turn lanes that cause traffic to back up and lead to rear-end crashes.

The plans also add medians around the intersection, while an existing driveway to Machinery Row off of Williamson Street will be removed, principal engineer Jim Wolfe said. The driveway is problematic due to poor visibility of path users around the corner of the building, while its location also allows vehicles to make some unexpected turns, he said.

A nearby driveway will be reconstructed, he said.

The work will also include replacement of the sanitary and storm sewers within the project limits, new pedestrian scale lighting on South Blair Street and railroad crossing improvements to allow for the installation of a quiet zone. In a quiet zone, trains must cease the routine sounding of their horns when approaching crossings.

The intersection is now the only train crossing in the core Downtown not improved to a quiet zone.

City to explore grand connections between Downtown and Lake Monona

“This project is many, many years in the making,” said Ald. Mike Verveer, 4th District. “I’m confident that the plan now under construction will greatly improve pedestrian and bicycle access to Law Park and the surrounding area. Most important, it will improve safety for all involved.”

Starting Monday, Integrity Grading & Excavating will start work at the John Nolen Drive, South Blair Street and East Wilson Street intersection. Northbound South Blair Street will be reduced to one traffic lane, which will result in travel delays during peak travel times for about two weeks.

Around April 1, major excavation will begin. During this time:

Signage suggesting an alternate route using South Broom Street, West Wilson Street and the Outer Loop has been installed by the contractor.

In 2019, the city completed work on the East Wilson and Williamson street legs of the hairball intersection, which are city streets, with the work now primarily on the South Blair Street and John Nolen Drive legs, which are part of state Highway 151.

Next are improvements of East Washington Avenue between Blair and Blount streets in 2023.

Then, in 2026, the city and state will begin the major reconstruction of John Nolen Drive from North Shore Drive to the south, including the replacement of bridges and upgrades to the heavily used Capitol City Trail.

As the community emerged from the COVID-19 pandemic, it's been amazing to witness the creativity, dedication to causes and resilience that give hope and promise. I chose stories that reflect that dynamic, some involving long-held dreams, including pieces about a vision for the next Downtown in the wake of the pandemic and protests against racism, and the Bayview Foundation's plans for redevelopment of low-income housing into what will be one of the coolest neighborhoods in Madison. A proposal for an 18-story housing tower that would have razed the historic Wonder Bar with its gangster lore on the South Side revived a movement to save the building with the final chapters of the saga yet to be written. After fits and starts, the Wisconsin Historical Society chose a site for a long-sought, $120 million museum at the top of State Street. And I was able to document the move of a homeless man from the once sprawling homeless encampment at Reindahl Park near East Towne to the city's first tiny shelter encampment in an industrial area on the Southeast Side.

There's been so much more -- the plight of event venues amid the pandemic, the Urban League of Greater Madison's proposed Black Business Hub and the unveiling of plans for the Center for Black Excellence and Culture, both on the South Side, new investments and initiatives to address gun violence, the coming of bus rapid transit and a transit network redesign.

It will be something to watch so many of these ventures come to fruition in coming years.

Forging the Next Downtown

With hard lessons from the pandemic and protests, Madison looks to forge a more diverse, inviting Downtown.

The nonprofit Bayview Foundation is poised to launch a $50 million, low-income redevelopment that could become one of the city's coolest neigh…

McGrath Properties original proposal for an 18-million redevelopment, the tallest residential building in the city, would have razed the Colis…

The Wisconsin Historical Society, after picking a site for a new $120 million museum at the top of State Street, unveiled plans that show a gl…

With winter approaching, the city moved the first homeless from a sprawling encampment at Reindahl Park to 30 tiny shelters with heat on the S…

Madison to convert almost half its median planting beds to grass, concrete

Citing budget constraints, the city wants to convert 62 planting beds to turf and 27 beds to colored, stamped concrete but wouldn't remove any trees.

The city and neighborhood partners are moving to transform a modest space atop a Madison Water Utility well overlooking Lake Monona into an artistic, comfy and engaging community destination.

The driver did not show signs of impairment after the crash and was cited with traffic violations, police said.

The city is starting a complete reconstruction of South Blair Street from East Washington Avenue to John Nolen Drive, including the "hairball" intersection with East Wilson and Williamson streets.

The reconstruction of South Blair Street is expected to run through November.