Legendary Wisconsin State Journal sports columnist Joseph "Roundy" Coughlin was known as the "Sage of Mendota" until he died Dec. 9, 1971. He had an innate skill of predicting the outcome of sporting events, and that ability -- along with a gregarious personality and quick wit -- combined to create a national reputation for a thoroughly homegrown talent.

Coughlin, inducted into the Madison Sports Hall of Fame in 1968, was also considered a pioneer in forms of the new media at the time, radio and television. Although he was a sports columnist for 47 years, he wasn't bound by the usual rules of grammar and style that writers usually observe. But that only seemed to add to his appeal. For years, his column was just called: "Roundy says."

"The big guy was everybody's friend," according to a story in the State Journal the day after his death. "A walk around Capitol Square took him an hour, so many people wanted to talk."

Roundy, as everyone called him, had a big heart -- leveraging his celebrity to raise money for causes involving children, including the newspaper's Empty Stocking Club and his own charity, the Fun Fund, for disabled children. For many years, he held court with a group of friends and admirers at a luncheon group called the Rounder's Club. The club continued to meet and raise money for Roundy's charities long after his death. The Rounder's Club plans its 75th and final benefit holiday lunch on Wednesday, Nov. 28, to raise money for the Empty Stocking Club.

'What more could be fairer?' 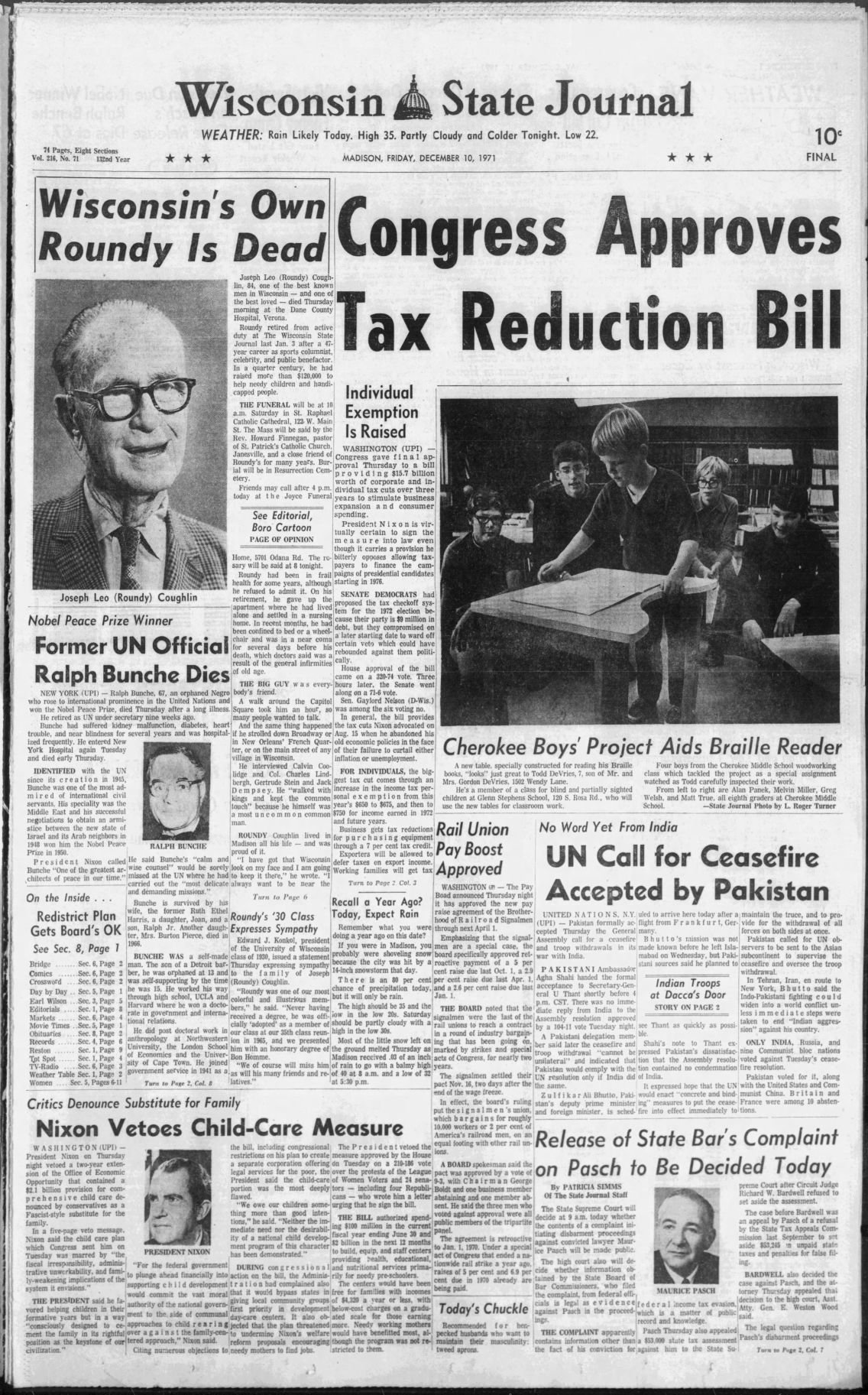 More in Throwback galleries: A look inside the State Journal's archives (24 of 28)

One thing we’ve learned over decades of running the Empty Stocking Club is that your donations matter.

Children recognize the meaning of the Empty Stocking Club

Children understand the power of the Empty Stocking Club.

For more than 100 years, the Wisconsin State Journal and its readers have joined together to make sure no child is passed over at Christmastime.

Here's a look at Christmases past, as told through the pages of the Wisconsin State Journal.

The 'Sage of Mendota' lives on: Twitter feed brings legendary Madison columnist's work back to the forefront.

Rounder's Club, a holiday tradition of giving, set for 75th and final luncheon

The club, founded by legendary State Journal sports columnist Roundy Coughlin, has raised money for children in need through the Empty Stocking Club for decades.

For 100 years, the Wisconsin State Journal and its readers have partnered to fulfill a simple mission: to make sure every child in our communi…

For 100 years, Wisconsin State Journal editors have asked for the help of their readers to brighten the holidays for poor children.

Some people may wonder if it matters all that much to provide a Christmas gift for a child who would not otherwise have one.

Throwback photos: Experience Father's Day in Madison in the '50s

Do you know any of these dads or kids? The State Journal ran features celebrating fathers and their children in honor of Father's Day in 1952 …

Take a step back in time to remember old-school newspaper delivery boys on National Newspaper Carrier Day, which is Sept. 4. Newspaper carrier…

From the 1950s until 1994, the Wisconsin State Journal compiled some of the best reader-submitted recipes into annual cookbooks.

The Wisconsin State Journal ran an annual cookbook contest from 1956 to 1994, with staffers vetting thousands of recipes for possible inclusio…

Throwback photos: Vintage Christmas toy ads from the '20s through the '80s

For many local families struggling to meet basic needs, the Empty Stocking Club is a game changer.

With an eye toward easier reading on any size screen, enhanced navigation and faster loading time, the Wisconsin State Journal’s website will …

Many reasons for giving to the Empty Stocking Club

Since 1918, our readers have generously supported the nonprofit organization that works to make sure all children in our area have at least one nice, new toy to open at Christmastime.

When you donate to the Empty Stocking Club, know that you are making a real difference in a child's life -- something they will remember for years to come.

Since 1918, the newspaper and its readers have partnered to make sure no child is forgotten during the holiday season. We still need contributions to keep this tradition alive for years to come.

Some people may wonder whether giving a child a toy at Christmas makes much difference.