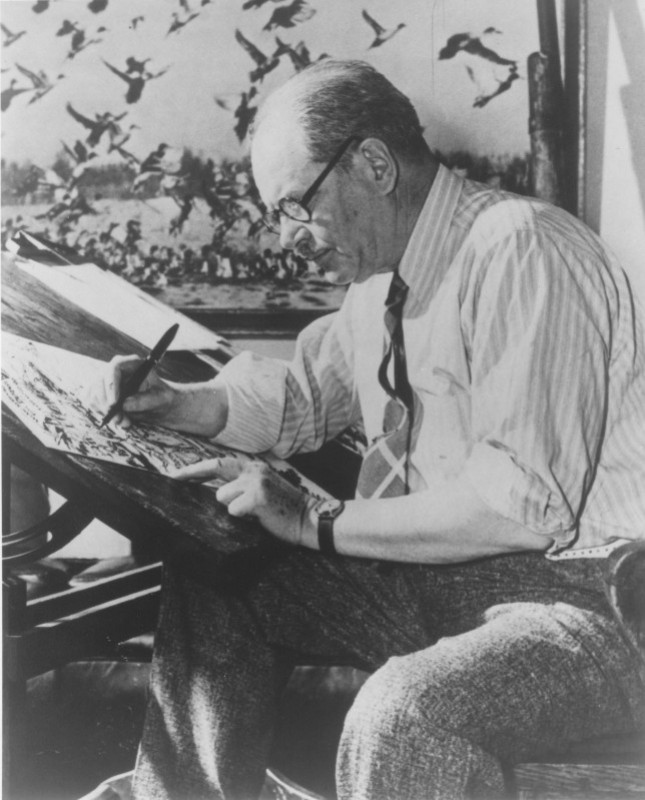 The first Federal Duck Stamp was sketched in 1934 by Jay N. “Ding” Darling, who worked for the Des Moines Register. Darling, who twice won the Pulitzer Prize, died 50 years ago. 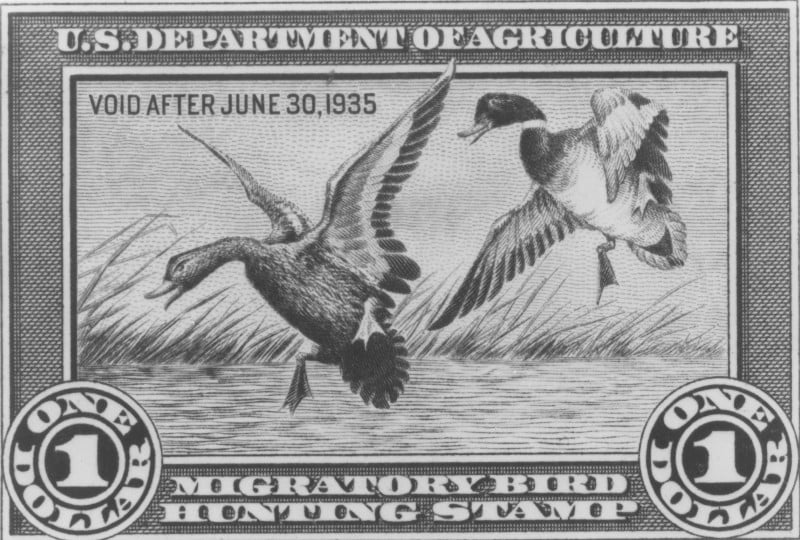 The first Federal Duck Stamp, at left, was sketched in 1934 by Jay N. “Ding” Darling, who worked for the Des Moines Register.

TIM EISELE | For the State Journal

One of the nation’s conservation leaders, the late Jay N. “Ding” Darling, was a political cartoonist with the Des Moines Register newspaper who was appointed chief of the U.S. Biological Survey by President Franklin D. Roosevelt in 1934. He went on to sketch the design that became the very first U.S. Migratory Bird and Conservation Stamp, which is a required purchase by all waterfowl hunters ages 16 and over.

It also helped to purchase Waterfowl Production Areas in Wisconsin, such as Shoveler Sink just west of Madison. These areas are open to public hunting, but more importantly provide secure nesting habitat to waterfowl, upland birds and other wildlife.

Everyone who is sloshing around in waders in marshes and wetlands this month in pursuit of ducks and geese should doff their camouflage cap to “Ding Darling” for the habitat his stamp has provided.

What isn’t as widely understood is that the Duck Stamp can be purchased by anyone, not just hunters. Just go to the local Post Office and for $15 you’ll get a work of art on a stamp that lets you participate in this unique legacy.

Oct. 14 to 20 is National Wildlife Refuge Week and that’s a great time to buy your stamp.

Ding Darling was responsible for beefing up professional staffing of the U.S. Biological Service, predecessor of today’s U.S. Fish and Wildlife Service, and mandating restrictive hunting regulations to give more protection to migratory birds.

Following two-years at the U.S. Biological Service, Ding Darling returned to Des Moines where he continued drawing political cartoons that twice earned him a Pulitzer Prize while calling attention to the nation’s conservation needs.

Wisconsin has a unique tie to Darling. He attended Beloit College and worked on conservation matters with the late Aldo Leopold, the nation’s first professor of game management at UW.

This year, the 50th anniversary of his death, Samuel Koltinsky, owner of Marvo Entertainment Group and producer of award-winning documentaries, is introducing a documentary about the fascinating Darling.

Titled “America’s Darling: The story of Jay N. ‘Ding’ Darling,” the documentary tells how the small-town cartoonist changed America by influencing its presidents, changing its landscapes and winning the hearts of its people.

“I started doing research on Darling and then his vision, leadership and whimsical side seeped into my soul,” Koltinsky said. “He was a modern-day Renaissance man. I hope that this documentary will inspire the world.”

The 60-minute film features the Duck Stamp program and its importance for conservation. Koltinsky notes that Darling is joined by Teddy Roosevelt, Aldo Leopold, and Rachel Carson as four of America’s greatest conservation heroes.

Darling’s grandson, Kip Koss of Key Biscayne, Fla., believes that Darling’s most important conservation contribution was helping to bring about a heightened awareness of the need to use our natural resources wisely.

As for the documentary, Koss said, “Sam and his team have done what most would consider impossible: condensing Ding Darling’s remarkably productive life into a 60-minute documentary.”

He said Koltinsky has “skillfully blended interviews with audio and visual treasures that captures the warmth, breadth and passion of this inspiring teacher and leader; my grandfather.”

The documentary, which premieres in Florida on Oct. 19, helps today’s young people realize the vision of yesterday’s conservation leaders.

More information is available at http://www.marvoentertainmentgroup.com.

Darling of a documentary

The premier of the Darling documentary is Oct. 19 at the Jay N. “Ding” Darling National Wildlife Refuge in Sanibel Island, Fla. Other showings are Oct. 21, Darling’s birthday, in Charlevoix, Mich., near where he was born, and Oct. 23 in Des Moines, Iowa.

The DVD is available for $20 from http://www.marvoentertainmentgroup.com.

The first Federal Duck Stamp was sketched in 1934 by Jay N. “Ding” Darling, who worked for the Des Moines Register. Darling, who twice won the Pulitzer Prize, died 50 years ago.

The first Federal Duck Stamp, at left, was sketched in 1934 by Jay N. “Ding” Darling, who worked for the Des Moines Register.