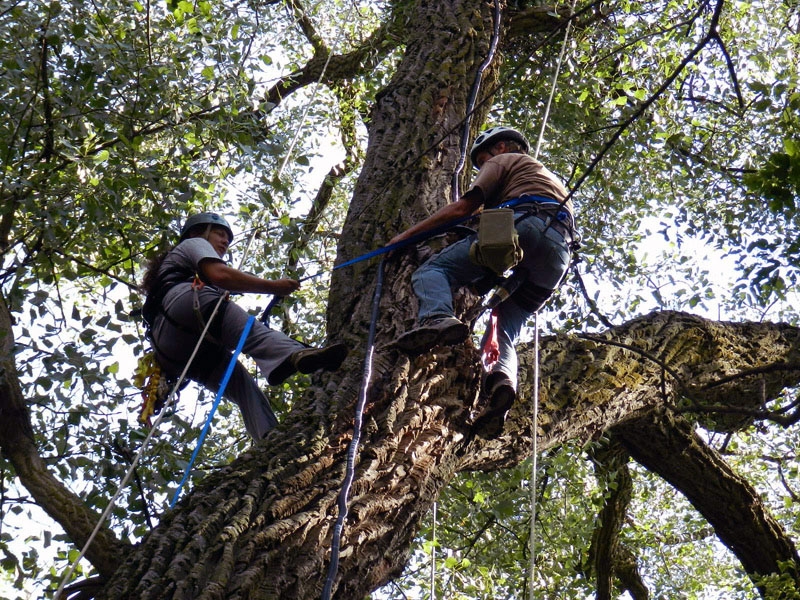 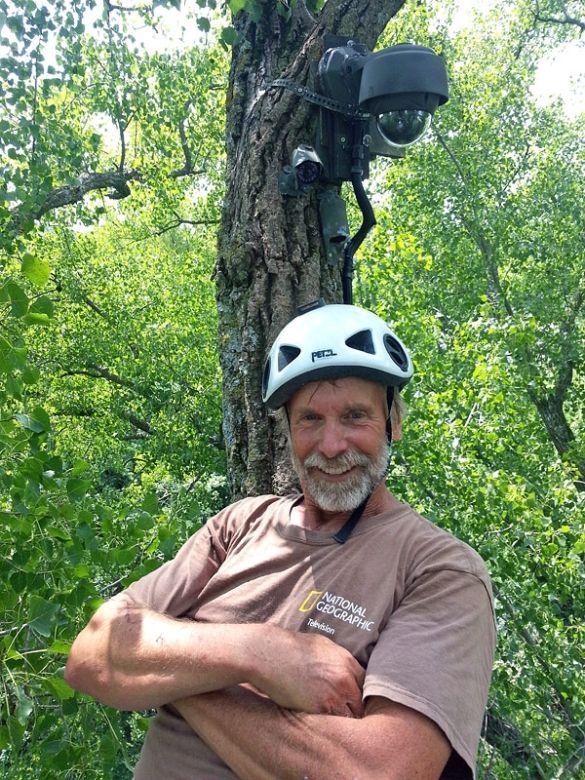 Videographer Neil Rettig shows the new camera above him that is now monitoring the bald eagle nest in Decorah, Iowa.

The Decorah eagles are new parents and a new camera is following the nest.

The pair of bald eagles laid three eggs in their new nest over a period of 10 days and the first egg hatched on April 2. The second egg hatched April 4 and the third on April 7.

Bob Anderson, executive director of the Raptor Resource Project in Decorah, Iowa (located west of Prairie du Chien, Wisconsin), said there was a question whether the eggs would even hatch due to the cold weather this winter.

Last year he monitored a nest in Minnesota where all of the eggs failed to hatch due to cold weather.

This year, eggs were laid on Feb. 23, Feb. 26, and March 2 in the Decorah nest. The third egg tolerated three days of sub-zero weather reaching minus 20-degrees Fahrenheit and the next day there was 10-inches of snow.

Anderson said that conditions couldn’t have been worse for egg survival.

Temperature, humidity and turning of eggs are all important to ensure that an embryo survives and hatches.

Now that the eggs have hatched the adults will be busy bringing food to the young in the nest for about 12 weeks, or until the young fledge.

The Raptor Resource Project has tracked the nest success of the same pair of eagles since 2008, allowing viewers to get real time video of nesting activities and rearing 17 young bald eagles.

But in 2013 the adults threw a wrench into viewers’ plans as they built a new nest in a different tree. They raised their young in that nest which was not monitored with a camera.

People who were used to watching the eagles each day went through withdrawal without their “eagle fix,” but last August a new camera was installed to record activities in the new nest.

"The interesting thing is that last year, as soon as they fledged (flew) from the new nest, they all went to the old nest and never returned to the new nest,” Anderson said. “I find that fascinating.”

This is the eighth year of cameras monitoring an eagle nest.

Anderson watched the whole process as the pair of eagles increased activity around the nest the first week in February. They brought up marsh grass and formed it into a bowl to finish the nest and help keep eggs warm.

This year, the Raptor Resource Project has added another camera to monitor a second eagle nest, this one located in Wisconsin at Glen Haven in Grant County on 1,400 acres owned by the Kohler Company near the Mississippi River. The nest is known as Eagle Valley.

The pair of eagles laid their first of two eggs on March 27. It normally takes about 35 to 39 days until the eggs hatch.

Anderson said that it will be interesting to then compare the progress of the Decorah pair with the Eagle Valley pair.

Where the Decorah eagles are nesting in a semi-rural area near a trout hatchery and trout stream, the Eagle Valley eagles are near the Mississippi River and a lock and dam.

The nest is in a rural area and is not visible from any roads.

Anderson said the Eagle Valley eagles tend to bring in a fair number of mud hens, grebes and carp to feed to the eaglets, whereas the Decorah birds bring in trout, suckers, pigeons, and road-killed animals.

Anderson has had a front-row seat watching the eagles and has been surprised by two things.

“I’m totally amazed at how often raccoons are trying to get at the eggs and the young,” he said. “I’m just shocked. One night there was a raccoon trying to get the female off the eggs, and we’ve seen that in the other nests as well.”

Because they use an infrared camera they can watch the birds at night without having a light on the nest.

When a nest fails, people often jump to a conclusion that it is an environmental issue, but Anderson thinks the number one failure for nests is due to raccoons.

“The other thing that we’ve learned is that the adult eagles come and go at night,” he said. “That is a new thing we didn’t know before.”

The Raptor Resource project now offers a moderated chat this year and anybody can log on and ask questions. To follow the nest camera and chats go to http://www.raptorresource.org/.

Viewers can monitor both the Decorah, Iowa eagles and the Eagle Valley nest.

The Project has also made arrangements to host an “After the Fledge” get-together and picnic for people on July 19 and 20. People will be able to stay at nearby Luther College but motel space is expected to be tight. Visitors will then learn more about the eagles.

For information on the project go to http://www.raptorresource.org/falcon_cams/.

Videographer Neil Rettig shows the new camera above him that is now monitoring the bald eagle nest in Decorah, Iowa.