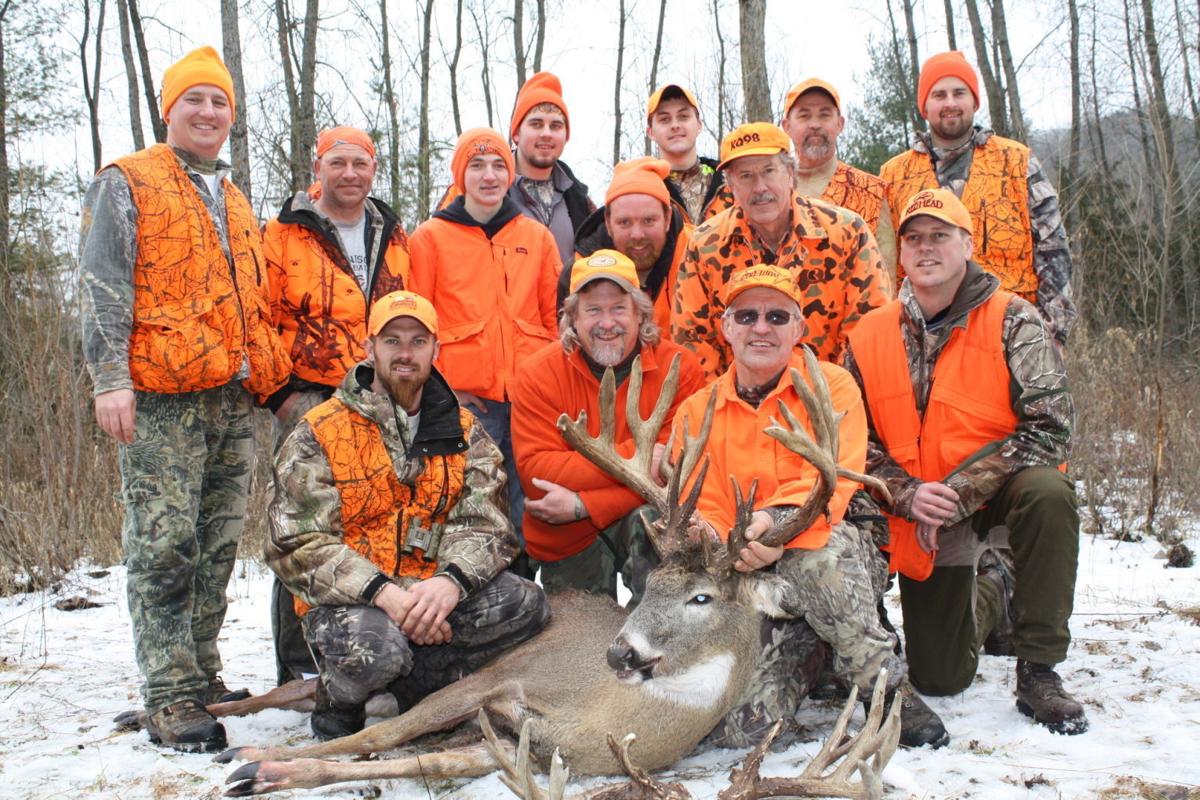 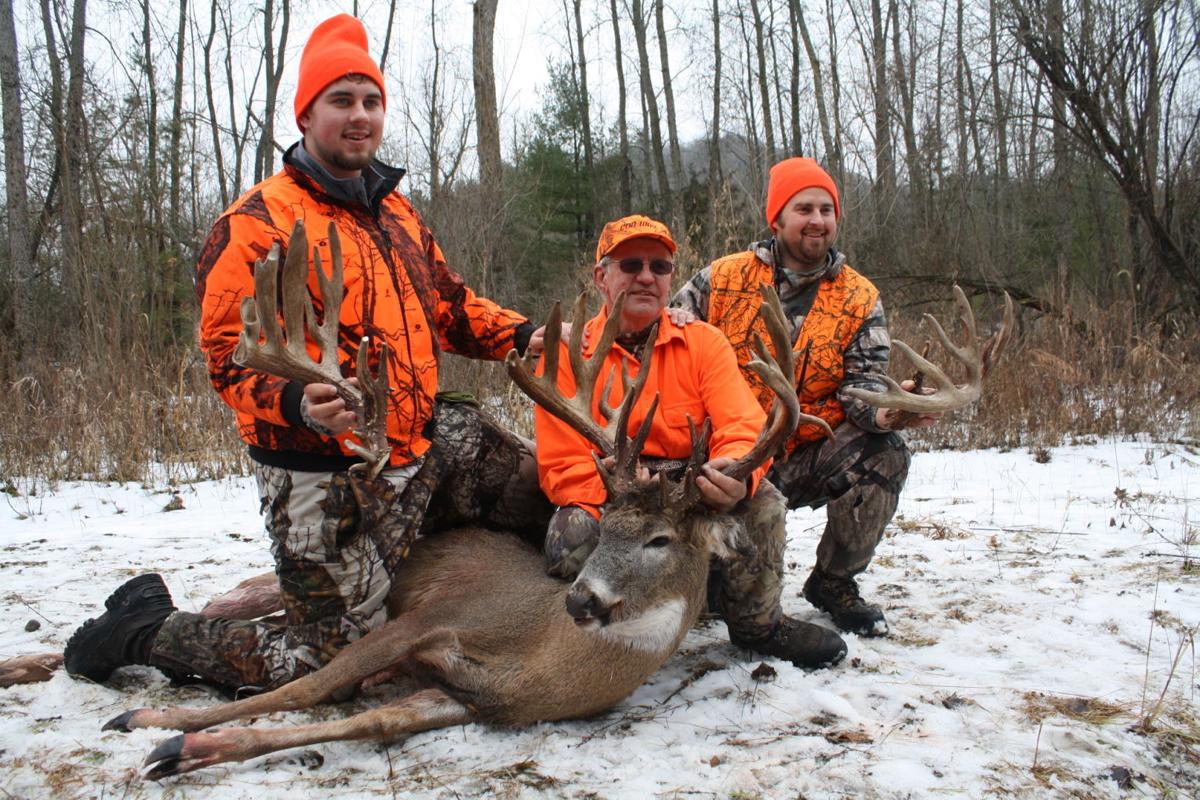 Stan Kreidermacher (center) holds a 28-point buck he shot on Dec. 13, the final day of the Minnesota muzzleloader season. The buck had a green score of between 235 and 248, which would shatter the current state non-typical muzzleloader record of 226 5/8. On the left, holding one of the animal's shed antlers, is his nephew Layton Kreidermacher, while another nephew, Landon Kreidermacher (right) is holding the other.

For those who frequent the rolling hills and valleys of the southeastern Minnesota’s prime white-tail country, news of a legendary buck’s possible demise traveled at cyber speed.

This wasn’t Big Foot, mind you, as there was physical evidence — shed antlers — that this monster walked these parts with stealth-like movement that had only been captured on those sneakly trail cameras, but mostly during the hours humans sleep.

So was it true?

Did 60-year-old Stan Kreidermacher of Altura, Minn., really make the shot of a lifetime — with a muzzleloader at that — to bring this monster down?

Kreidermacher’s single blast of flying lead from about 60 yards grounded this 28-point — it has 29 points, but one is not long enough to score — 200-pound buck just past noon on Dec. 13, which happened to be the final day of Minnesota's muzzleloader season.

Only a rookie hunter would tell you where this all-but-guaranteed record-setting buck was actually shot, so all Stan would divulge is it was shot nearly the tiny town of Elba, which sits on the doorstep of the 27,000 acre Whitewater Management Area .

You can narrow it down from there.

So when Stan and the other 12 members of his hunting party hauled the buck to Elba and celebrated with a few rounds of adult beverages at Mauer’s Tavern, the word was out. Quickly.

“You can’t see everything by one picture, there are so many points everywhere,” Stan said of his buck, which is estimated to be six years old or older. “When I shot this deer I had no idea what it was. I had heard through the grapevine that there was this big buck, one that my nephews had been following for a couple of years.

“They never brought it up and I never asked to see any pictures of it. I knew they were trying to be secretive about it.”

The buck, which had been tagged with the tongue-in-cheek moniker of “Mean Gene,” has been unofficially green scored at between 235 and 248, which would blow away current, non-typical muzzleloader record of 226 5/8, which is held by Brandon Bernu. Bernu shot his buck in Ottertail County in 2005.

According to the Rochester Post-Bulletin’s John Weiss, Craig Pierce of Lewiston, Minn., who is an official scorer for Minnesota Official Measurements, said he has “every confidence it will be No. 1.”

News of his prized buck traveled so fast and furious that Stan, who farms as well as runs his own tractor repair business just outside of Altura, said he didn’t even make it to his shop for several days after bagging the buck.

“Apparently news of it is all over,” Stan said. “I haven’t done anything in my shop. I have had oodles of writers call me for an interview. I did a talk show, been on a radio station. As my brother told me when he saw it, ‘You’ve got no idea what you are in for.’”

What Stan and his wife, Pam, have discovered that when a possible record-setting white-tail is shot — especially one that had earned legendary status — everyone wants to talk to you about it.

Morning, noon, night, the calls keep coming. Reporters from national magazines, from newspapers, from radio talk shows, from outdoors online sites, they have all called — and keep calling.

"It has been unreal, honestly," said Pam, who also hunts. "I have heard the story so often I could tell it to you by heart."

And Stan is quick to say the same thing time after time. It took all 13 members of the hunting party, especially nephews Layton Kreidermacher, Landon Kreidermacher and Brian Ruhoff, to make it happen. He just happened to be in the right spot at the right time.

“This story is not about me and the deer. The real story is the effort of 13 people who made this happen. I was just the lucky devil to shoot it,” Stan said. “I can’t stress enough that they are the biggest part of the story.”

The story of the Mean Gene Buck — aka the Buss Buck — began somtime in the fall of 2013, said 21-year-old Layton Kreidermacher of Altura. It seems Layton’s brother, 31-year-old Landon, and his cousin, Brian Ruhoff, were looking for a place to do some pheasant hunting.

The man who told them about a good spot was mild-mannered Gene Stevens, a wildlife artist from the area, Layton said. So Landon and Brian went to this area — it remains confidential, although local folks know right where it is — to pursue some pheasants.

“They ended up kicking up a deer when they were pheasant hunting. They knew it was big, but didn’t now exactly how big,” Layton said. “(That winter) we decided to go look for sheds (antlers) from it. My brother and I went up there and he found one right away.

“With those big ones, kind of the rule we follow is both halves (of the antlers) generally fall within 200 yards of each other.”

So five hours into the second day of looking for the other shed antler, Layton found it.

“We knew this was a huge deer, but it grew quite a bit over the last year,” Layton said.

Layton and Landon, avid hunters, put out trail cameras in areas where they thought Mean Gene might frequent. They wound up getting 27 pictures of the mighty buck on trail cameras, but that’s it.

No eye-witness sighting for this savvy old white-tail.

“I hunted it pretty hard during all of bow season, but never did see it,” Layton said. “The first two weeks I was out there every day. Then the next day, we got the only hard-horn picture. It was only 60 yards from one stand.

“I was like, 'You’ve got to be kidding me.' I had asked off work the first weekend (of bow season) and really couldn’t ask for the next. Then he shows up.”

Layton went to the same spot during the first day of the Minnesota gun-deer season on Nov. 7, but never got out of his vehicle.

“I went there the first day of the shotgun season and there were 35 vehicles hunting this state land (near it). I said, ‘Man, you’ve got to be kidding me.’ I went to another spot, thinking there was no way this deer could survive that much (hunting) pressure.”

It did, which leads us back to Stan and the other 12 members of the hunting party. They had made two drives on Saturday morning (Dec. 13) and never saw Mean Gene. They had seen some doe, but not any “shooters,” as in big bucks.

On the third drive, that changed — and so did Stan’s deer-hunting resume.

“On the third drive I was one of the sitters. They did kick him up and one of the guys — on the top — shot and creased his back. One of the other guys seen him on the hillside, but did not get a shot,” Stan said. “I was on the bottom and heard a bunch of deer going through the thick brush. I heard a couple of faint grunts, then caught a glance of the antlers.

“I said, ‘This is not the big one, but it’s a pretty nice one.’ Then they disappeared for a period of time. Then off to my left, a little ways up on the hillside about 60 yards away, I saw a deer coming through a thicket.

“I put the gun in an area where I could see him the best in the brushy thicket and when the horns hit that hole, I pulled the trigger. I never seen him (go down), and with a muzzleloader you don’t get a chance to reload.”

Stan walked over to the area where he thought the deer had been hit, but no blood. A couple of other members of the hunting party soon joined him, and they quickly found a blood trail. About 300 yards later, there was more than blood.

There was Mean Gene.

“All the time I was thinking, ‘Maybe he wasn’t as big as I thought.’ Then all of a sudden I heard then screaming like a bunch of little girls,” Stan said. “There was simply disbelief. Sometimes you shoot a deer and there is what is called ‘ground shrinkage.’ This was kind of the reverse of that.”

Stan said they didn’t move the deer for two hours as members of the hunting party had a photo shoot with what they certainly believed would be a state record-setting buck.

Stan has decided to get a full body mount of Mean Gene, and is actually redesigning part of the new house he plans to build next summer to accommodate it a built-in area. You might say Mean Gene's going to have his own room.

And while deer of Mean Gene’s stature can fetch a hefty amount of money from outdoor-based companies who want to display it, Stan was quick to say this:

For the record, Stan dispelled rumors that he had been offered six figures — or more — for the almost certain record-breaking buck.

In the meantime, the whereabouts of Mean Gene's almost-certain record-breaking antlers remain a secret.

"They are in hiding," Stan said, chuckling. "They are locked away for safe keeping."

WHAT: A monster buck in southeastern Minnesota was named “Mean Gene” by those who pursued it for more than two years.

WHO/WHEN: Stan Kreidermacher, a 60-year-old who has hunted white-tail deer for 43 years, shot the buck on the final day of the Minnesota muzzleloader season on Dec. 13.

WAITING PERIOD: Kreidermacher has to wait 60 days from when the buck was shot for an official measurement as the antlers will have some shrinkage.

HOW IT'S SCORED: Deer antlers are “scored” by how many points they have, how tall those points are, how thick the antlers are, the distance (spread) between the two antlers and the thickness of the main beam.

TYPICAL OR NON-TYPICAL: If an antler has too many irregular points, they are classified as non-typical, which tend to score higher than typical antlers (matching sides).

FINAL HOME: Kreidermacher said the animal is "locked away for safe keeping" in a secret place. He said he eventually will have a full body mount of the animal, then likely display it in his home.

Here are the top five muzzleloader record-holders in the non-tpyical category, according to Minnesota Official Measurers:

Slideshow: The 20 most-read stories of December

Stan Kreidermacher (center) holds a 28-point buck he shot on Dec. 13, the final day of the Minnesota muzzleloader season. The buck had a green score of between 235 and 248, which would shatter the current state non-typical muzzleloader record of 226 5/8. On the left, holding one of the animal's shed antlers, is his nephew Layton Kreidermacher, while another nephew, Landon Kreidermacher (right) is holding the other.