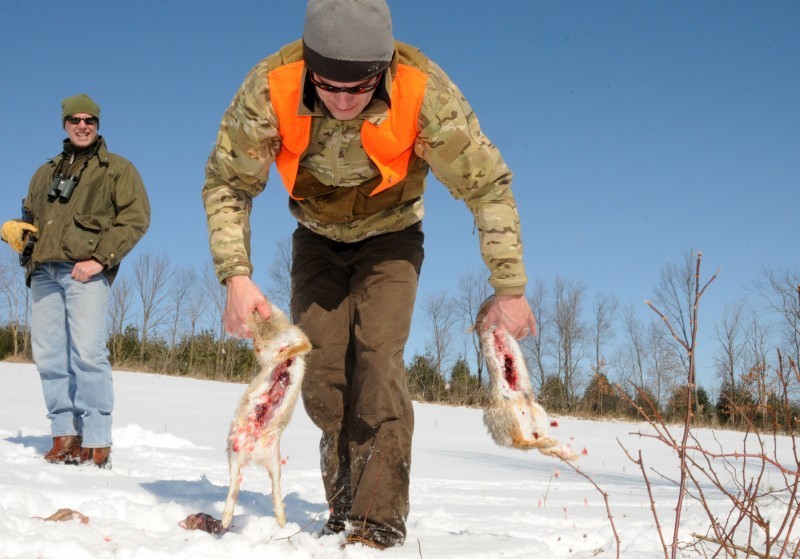 Steven Rinella shakes off two rabbits after gutting and cleaning them with snow. 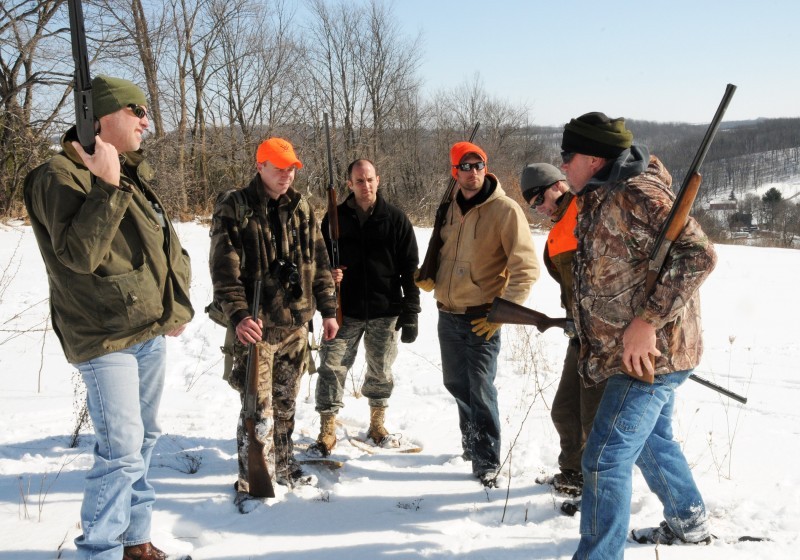 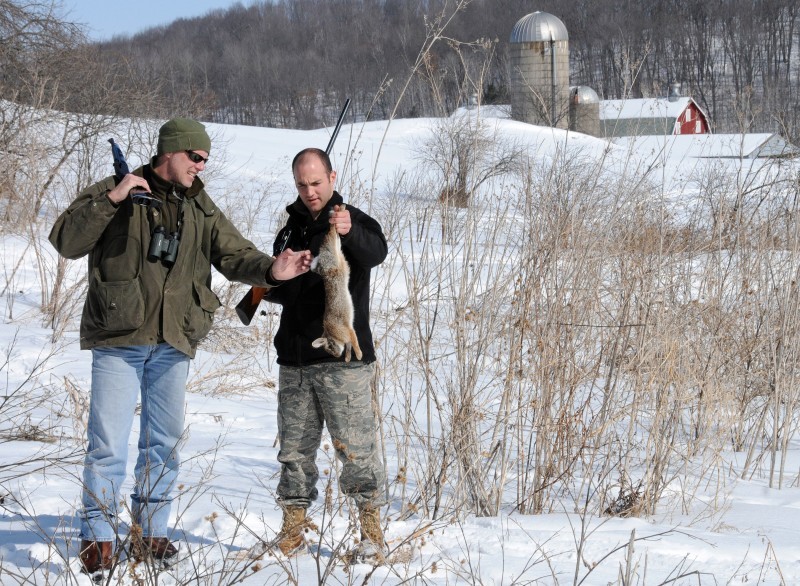 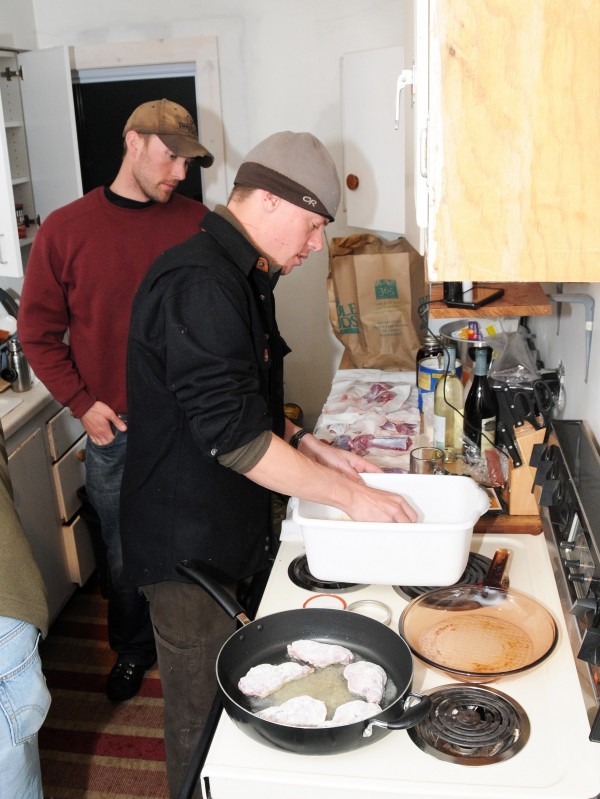 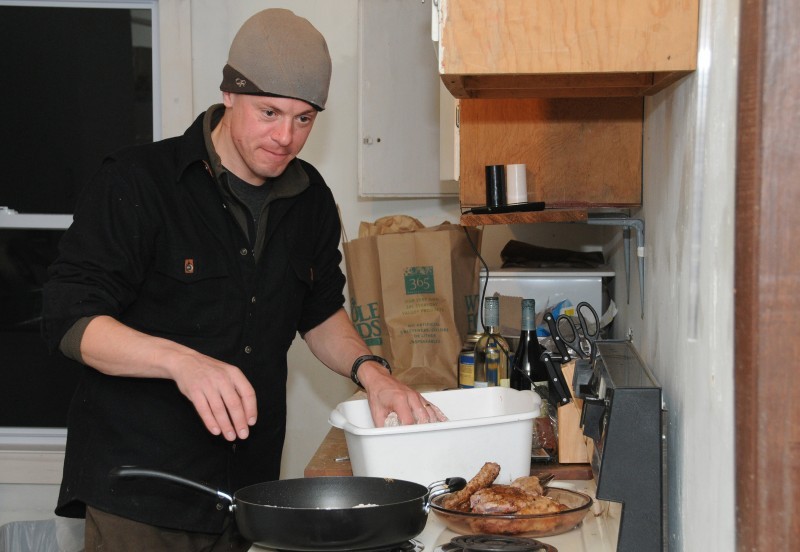 CAZENOVIA -- My first shot at a bounding bunny kicked up a silvery cloud of snow 2 feet behind its cotton tail, sending the rabbit into overdrive.

OK. Maybe the shot was 3 or 4 feet late. My shotgunning skills were rusty. Then again, 36 years had passed since my last serious rabbit hunt.

No matter. Tyson Hall's shotgun blast stopped the rabbit's run seconds later. Or maybe it took a .22 slug from Paul Neess' nylon-stocked Remington auto-loader, which had been popping off like a string of firecrackers. Either way, our seven-man group had its third rabbit of the morning.

We were hunting a brushy hollow behind the old Vince Duren family barnyard in Richland County. Our host, Doug Duren of Madison, grew up there, but like most hunters these days, he too had long forsaken rabbits for white-tailed deer.

Given that, it seemed fitting we waited until rabbit season's final day, Feb. 28, to again hunt the cottontail. We'd probably still be waiting if not for Duren's guest from New York, author Steven Rinella, host of "The Wild Within" on the Travel Channel.

Rinella grew up hunting rabbits in Michigan and Illinois. But unlike some of us, he hasn't so easily forgotten rabbit hunting's twisting, turning, stop-and-startle charms. So, once Duren and Rinella squeezed rabbits into their schedules, Duren put together a posse to hunt them.

Also joining us was Mark Boardman, Neess's co-worker at Vortex Optics in Middleton; and Karl Malcolm, a doctoral candidate in forest and wildlife ecology at the University of Wisconsin.

After Duren cooked and served us scrambled eggs with fried onions and potatoes for breakfast, we gathered guns and gear outside while he explained our first maneuver. Hall, Neess and Boardman then circled uphill to get behind the nearby hollow. Once there, they'd watch likely escape routes. Duren, Rinella, Malcolm and I then spread out to push the hollow's dense thickets of burdock, sumac, prickly ash, wild raspberry and multiflora rose.

Nasty stuff, that multiflora rose. I first mistook it for blackberry bushes, but when its long, hooked thorns dug into my scalp, legs and hands and held fast, I knew otherwise. How could a cottontail's delicate fur and skin survive this stuff? It makes raspberries and prickly ash look friendly.

I considered retreating to the thicket's perimeter, but then glanced toward Rinella and Malcolm. They were busting through the bristly brush with determination a beagle would admire. If I withdrew now I'd risk ridicule, maybe slander. Duren was within sight and sound, after all.

A rabbit scooted atop the snow, weaving and dodging through brush on the hollow's rim. Ripping free of the thorns, I hurried to a better vantage point. The rabbit responded by running toward Duren. When it paused, he rolled it with a blast from the bottom barrel of his .22/.410 gun.

When we finished the push and regrouped atop the hill, Rinella gutted the two rabbits, scrubbed their cavities with snow, and slid them into his coat's game pouch. After pushing a nearby pine plantation with no luck, we again swept the hollow on our way back to the house. That's when Hall shot the rabbit I missed.

After lunch we drove to a farm north of town where Duren had permission to hunt. There we made two more pushes, shooting three rabbits during the first hunt and two more during the second. By now it was nearing 4 p.m., and we agreed we had pushed enough brush and shot enough rabbits for one day.

We returned to Duren's farm, took a group photo, and accepted Rinella's offer to cook the rabbits for dinner. Hall and Malcolm skinned the bunnies, and removed their feet and heads. Rinella then cut the legs free and expertly trimmed out their backs.

As he laid them out, you would have thought the cuts were store-bought. After rolling the pieces in a Shore Lunch seasoning and pan-frying them in Crisco, Rinella put them in the oven for 45 minutes.

He then served dinner, along with hearty bread and Trish Duren's home-pickled beets. If I've eaten a better, fresher meal in a hunting camp, I've forgotten when.

I know for certain, though, that I won't wait another 36 years to hunt cottontails.

Contact Patrick Durkin, a free-lance columnist, at patrickdurkin@charter.net or write to him at 721 Wesley St., Waupaca, WI 54981.

WAUPACA -- So much for using crossbows to trigger attendance-boosting controversies for the statewide fish and wildlife hearings Monday, April 11.

Steven Rinella shakes off two rabbits after gutting and cleaning them with snow.