ASHEVILLE, N.C. - Zoe Smith is a 10-year-old gymnast who many people find to be extraordinary because she competes with a prosthetic leg and regularly beats her able-bodied peers.

To Zoe, though, this is old news.

She has been missing her left foot longer than she can remember. As she stretched out this week in a makeshift gym in a small church outbuilding on the outskirts of Asheville, N.C., Zoe found something else extraordinary she wanted to discuss.

"I'm going to lose a tooth in this practice," she told her coaches, opening her mouth wide. "It's really loose, see?"

The practice session was geared toward preparing Zoe - all 51 inches and 60 pounds of her - for her first national meet. It was this past weekend in Orlando, Fla., she competed in the AAU Gymnastics National Championships at the Wide World of Sports Complex at Walt Disney World Resort.

This wasn't a Florida trip that the Smith family had been planning to make. Zoe had won first place in the floor exercise and fifth place in the all-around at the state level for her AAU division. But Orlando was an expensive proposition.

One of the people who saw Zoe doing back handsprings and roundoffs at the North Carolina event, though, was meet director Jessica Harris. She is also the statewide head of AAU gymnastics events. Harris knew nothing about Zoe until a few minutes before the 10-year-old took the floor.

"Somebody had said something about this girl with one leg," Harris said. "And then there she was, about to go on. I thought, 'I've got to get a video of this.' And watching her compete, it gave me chills. I was awestruck."

That floor exercise - with Zoe flying through the air, her prosthetic leg gleaming in the bright lights - earned a score of 9.575 and a first-place medal. Watching it now you can see the talent, but also what one of Zoe's coaches, Jennifer Nikitopoulos, called the young gymnast's "sass."

Zoe explained "sass" this way: "When you're doing your routine, you just have this attitude about it," she said. "You're confident about what you're going to do, instead of being shy and not expressive."

That routine led Harris to decide on the spot that Zoe deserved to be in Orlando, along with her family and her coaches, and that Team North Carolina would sponsor them.

In Florida, Zoe knows she will get the same looks and the same questions that she often faces in a gym full of strangers. It doesn't bother her much, as long as the people ask nicely. She even has different age-appropriate explanations ready for what happened to her left leg when other children (and it is mostly children) ask about it.

"Mostly I get a lot of stares," Zoe said. "But some are actually brave enough to come up to me and ask ... I say I was born without a fibula bone. Or, if they're 6 years old and under and don't know what that is, I just say a bone in your leg. And I tell them they had to take off this part of my foot, so I'm only left with an ankle, and I wear a prosthetic.

"But if the kids are 3 and under, I take my sister and put her right there and let her explain - because I'm not good with little kids."

Fatima Smith, Zoe's older sister, is 11. The two are best friends and take gymnastics together. Fatima looks like Zoe's twin, except she is slightly taller and doesn't have a prosthetic leg.

Zoe was born with fibular hemimelia, a defect that occurs in about 1 of every 40,000 births. Even though Laila Smith, Zoe's mom, had several ultrasounds, no one diagnosed it. Zoe turned out to be missing not only her fibula but also half of the growth plates on her left leg. That meant that the damaged leg will grow at about half the rate of her right one her entire life.

The couple agonized before deciding upon a Boyd amputation, which removed the front portion of Zoe's left foot but kept the heel for support. Zoe had the operation at age 1 and began walking with her first tiny prosthetic soon afterward.

"Zoe can still walk on that leg without her prosthetic," Laila Smith said, "although with the leg length difference, it's getting harder."

Zoe mostly wears her prosthetic, although she takes it off during gymnastics classes for some of the stretching exercises because it isn't as flexible as the human body. She has gone through about 10 prosthetic devices so far as she has grown, and she showed every one of them on a recent visit.

Several of the artificial feet had their toenails painted. "They say we can do that," Zoe said, "so I do."

She and Fatima started gymnastics about five years ago, when the family lived in California. The Smiths were home-schooling their children and running a goat-breeding business at the time. They figured their girls would benefit from some sort of exercise class.

Zoe - whose real name is Zuleikha, but who has recently decided to go by Zoe - advanced quickly.

In the meantime, wanting to get nearer their relatives, the Smiths moved to Asheville last August. Then the girls took a few months off from gymnastics. But they missed the sport, and returned to it in January.

Zoe's husband-and-wife coaching team, Fred and Jennifer Nikitopoulos, are young instructors who currently don't have access to a full-sized gym. For awhile, Zoe and the other members of Halo Gymnastics would meet at public parks around Asheville to train. Now they work out at Candler Church in an outbuilding that is barely 1,000 square feet.

The building doesn't have a set of uneven bars. The balance beams are homemade and sit on the floor. Zoe can never do her real floor routine at practice, because the outbuilding can't accommodate any full-sized equipment.

"She kind of just has to imagine what it's all going to be like," said John Smith, her father.

Zoe's spartan training site doesn't bother her. She flitted from one girl to another at practice, obviously enjoying the camaraderie both with her sister and the other gymnasts.

She said her future goal is to be a college gymnast, but for now she's happy with trying to learn her next skill and playing with the family's two kittens (Willow and Ginger) in her downtime.

Even in limited space, the way Zoe can maneuver her body in practice is startling. Handstands, splits, front flips, back handsprings - watch her awhile, and the prosthetic leg fades into the background while her talent shines through.

The most difficult apparatus for Zoe to master, though, is the balance beam. Her prosthetic, which she sometimes calls "my cheetah foot" because it makes her feel faster, presents challenges when she tries to perform on a 4-inch-wide piece of wood.

"Terrible" is too strong a word for it, but certainly Zoe has many more steps to take before she figures out how far she will go in gymnastics.

She is starting to make a name for herself already. Once Harris's colleagues at the AAU heard about Zoe, they chose her from the 2,500 athletes attending the Orlando meet to light the torch Friday night at the "Celebration of Athletes."

Though for Zoe, she had more important things on her mind. About an hour into practice, her loose tooth fell out.

"Told you!" she said, bouncing over to her father, tooth in hand.

"Looks like I better tell the tooth fairy to round up a quarter," John Smith said.

Zoe grinned, and then ran off to do another back handspring. 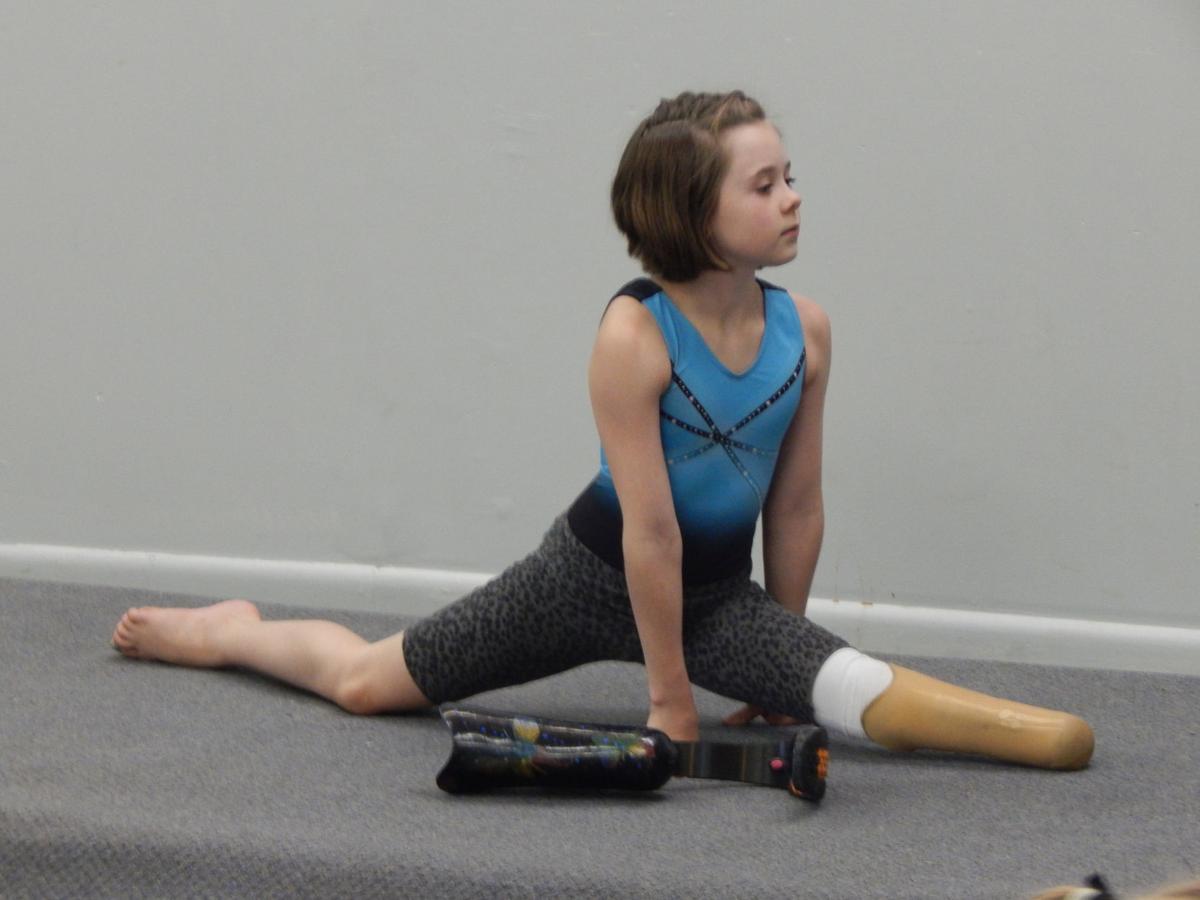 Zoe mostly wears her prosthetic, although she takes it off during gymnastics classes for some of the stretching exercises because it isn't as flexible as the human body. (Scott Fowler/Charlotte Observer/TNS) 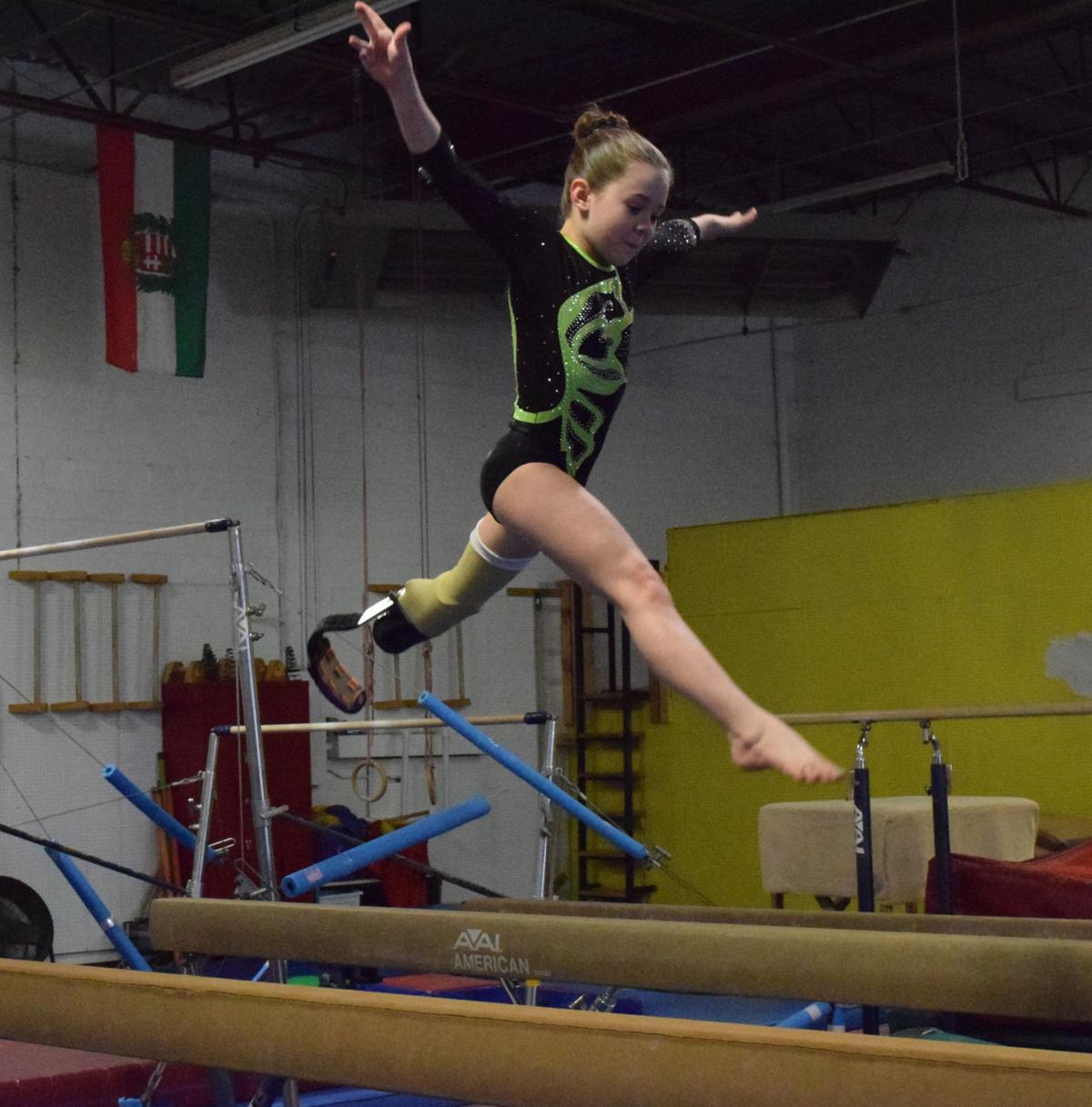 Zoe Smith, 10, performs on the balance beam. Zoe competes with a prosthetic left leg due to her left foot being amputated at age one. (John Smith/HALO GYMNASTICS/TNS)