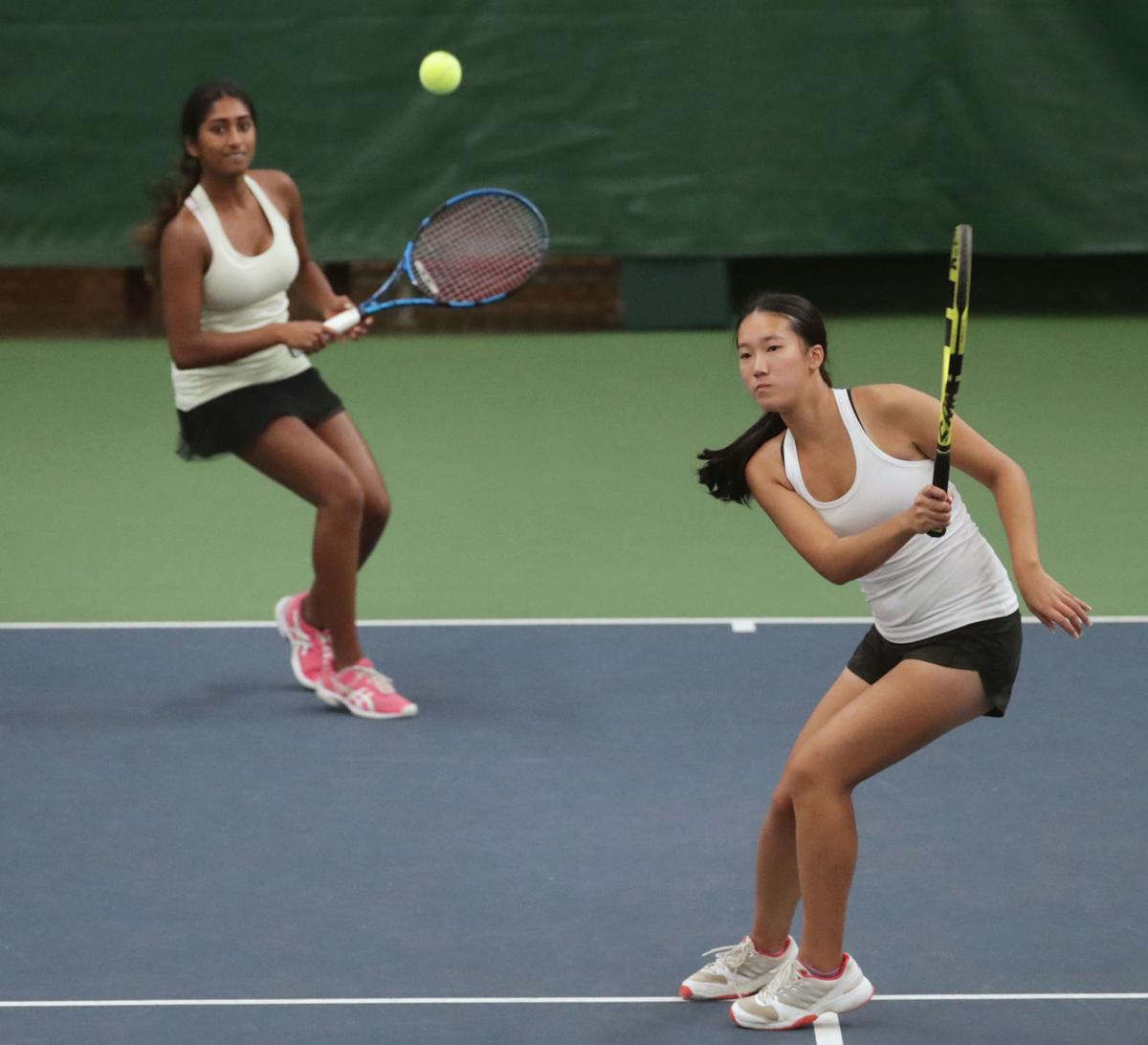 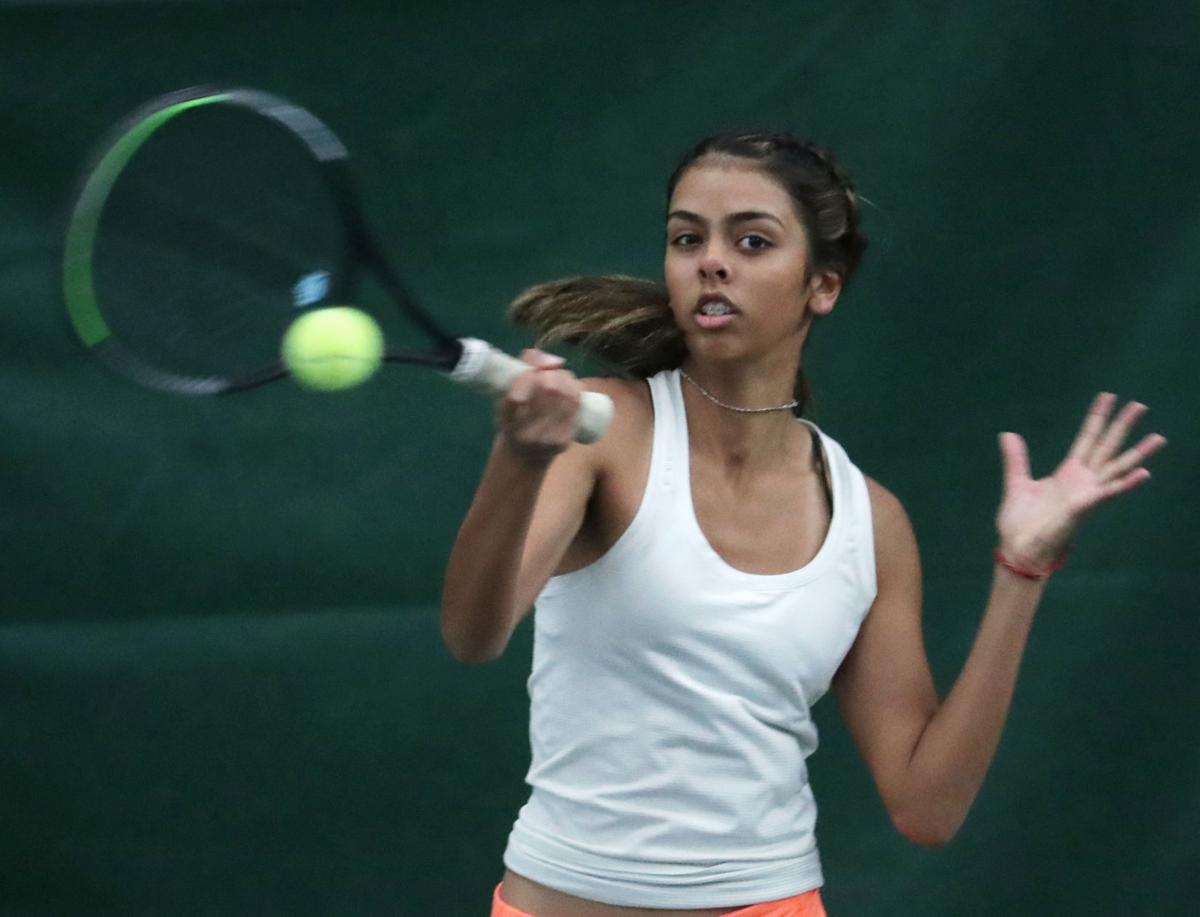 Coming off months of physical therapy to recover from deteriorated spine fusion surgery dating back to when she was 12 years old, Madison Memorial’s Nikita Remesh didn’t know whether or not she would be able to play this fall.

So when the senior picked up a racket again for the first time just three days before the start of the season, she knew making the switch from singles to doubles play would be the smart move.

After an early feeling out period alongside new playing partner Elizabeth Wu, the pair found the right fit and got on a roll to the WIAA Division 1 individual state tournament. The Spartans’ top tandem didn’t show any signs of slowing down Thursday as they rolled to a straight-sets win over Janesville Parker’s Annie and Lucy Barnes in their first-round match at Nielsen Tennis Stadium.

“It is the best feeling ever,” Remesh said. “Making it to state itself is like the biggest accomplishment in the world for me because I didn’t even know I was going to be able to play this season.”

Remesh, who finished in the top eight at this past spring’s alternate fall state tournament, said she and Wu approached each other before the start of the season, with the former making the jump to doubles and the latter in need of a new partner following the graduation of Janna Liu.

“Starting off we had very different playing styles and personalities on the court, so I think we kind of just had to get used to each other,” said Wu, who admitted she’s more of the calming influence on the court.

Regardless of their role, the pair’s budding chemistry was on full display against the Vikings.

Remesh and Wu cruised to a 6-2 6-1 victory. With their meshing personalities, Wu admitted the pair’s movement together on the court was an early struggle but the pair are definitely in synch now.

And with their top goal of making state already crossed off, how the final two days of the tournament pan out, starting with Friday’s second-round match with Green Bay Southwest’s Mallory Kerhin and Janelle Novotny, is icing on the cake. But that doesn’t mean the pair isn’t optimistic.

“I mean, Elizabeth, we could make it to the finals if you want,” Remesh mused after the win.

Both had their share of close calls grinding out straight-set wins, but it was Ryan and Andler that got pushed to the brink of a decisive tiebreaker. After pulling away for a 6-3 win in the opening set, the senior/sophomore duo trailed 5-4 late in the second set.

However, after knotting things up and breaking the serve of Eau Claire Memorial’s Kimberly Harvey and Katie Rentzepis, the Cardinals put things away in the final game with a Ryan smash at the net as the final point.

“We don’t like tiebreakers,” Andler said with a chuckle. “They’re a little stressful, but it didn’t feel like we were losing. It always felt like we were right there, so even though there was a lot of pressure, we didn’t feel it necessarily.”

“I just wanted to play tomorrow,” added Ryan, who qualified for the alternate state meet this past spring. “I feel like there’s no pressure anymore.”

Andler and Ryan will square off with Brookfield East’s Maddie Radtke and Jasmine Sun in Friday’s second round.

Joining the pair in the second round are Conrad and Li, who weathered an opening set push from Sun Prairie’s Reagan Schwartzer and Alexandra Stein to pick up a 7-5, 6-0 win.

Baraboo seniors Paige Lewison and Lanie Koppie punched their ticket to Friday’s second round with a 6-2, 6-2 victory over Union Grove’s Abby Wilks and Sam Chizek.

Conrad and Li will meet Hudson’s Kira Young and Grace Lewis, while Lewison and Koppie will take on the 15th-seeded pair of Ella Martin and Anna Sueflohn from Kettle Moraine. Olson finished second in the spring's alternate fall state championship, where Somasundaram finished fifth. The pair are not the only locals still alive heading into Saturday's final rounds.