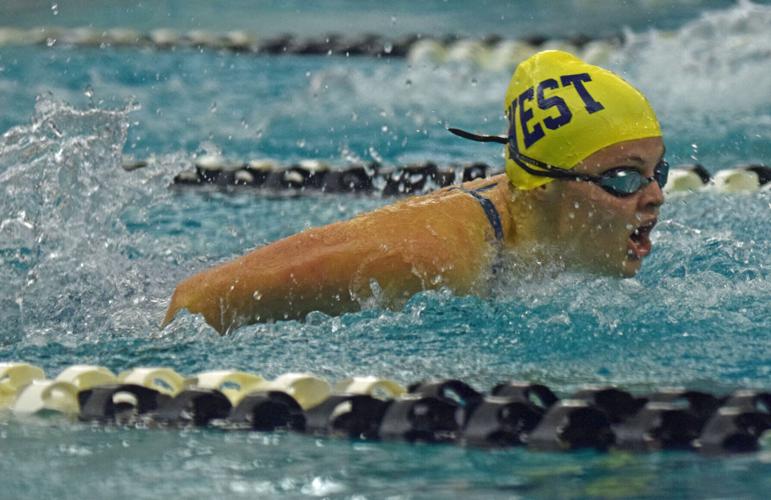 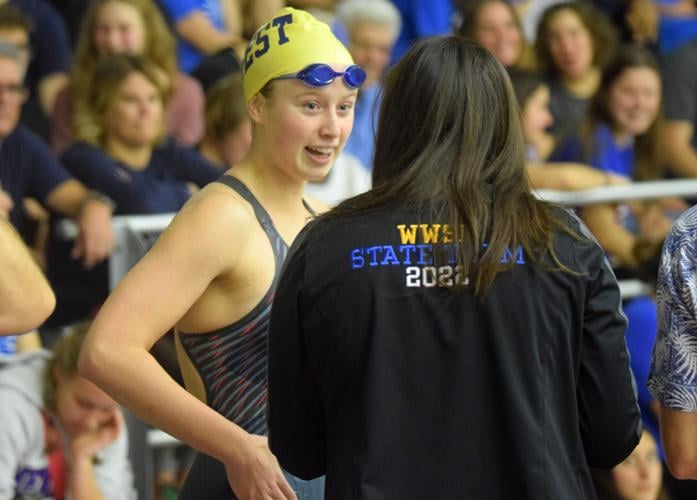 WAUKESHA — Ellen Osthelder knew from looking at the seed times she had her work cut out for her in the 100-yard butterfly at Saturday’s WIAA Division 1 state swimming and diving championships.

The Madison West senior wasn’t afraid to set her sights on third place with top-seeded Campbell Stoll of Arrowhead, a Texas commit, and Brookfield Central’s Sophia Brueggeman considerably ahead of her.

“I knew it was doable and I was gunning for it,” she said.

Osthelder made it a reality at the Waukesha South Natatorium, finishing behind the leading pair with a time of 56.02 seconds, delivering the lone individual podium finish for the Regents. Osthelder’s bronze medal paced Madison West to a 12th-place team finish with 73.5 points.

“Ellen is a very determined person who knows what she can get and knows her level of swimming,” Madison West coach Amanda Ellmaker said. “On Friday, she was like, ‘I’m going to get third,’ … and it’s awesome to see what she thought she could do and achieve that.”

Osthelder entered the event seeded fifth and looking to improve on her 11th-place finish last season. She credited an increased focus on the technical aspects of her race for the stronger finish.

“My starts and turns especially, and then my underwaters,” she said. “This year compared to last year, I feel so much more confident in my start and off every wall my underwaters were a definite improvement.”

The afternoon got off to a dreadful start for the Regents when their 200 medley relay was disqualified in the day’s opening event. The team of Osthelder, Hannah Mello, Natalie Austin and Zeynep Yapici was disqualified on the team’s final relay exchange, nullifying a fourth-place finish in 1:46.23.

It was a bitter pill to swallow but one Ellmaker lauded the group for doing in such a composed manner.

“I think that was one of the biggest highlights,” she said. “Coming in here after the medley relay and seeing them talk together as a team like, ‘We’re all in this together. It’s not just the one person who disqualified.’”

Osthelder, Mello and Yapici made up for it later in the 200 freestyle relay. The trio teamed with Ren Talerico to finish fifth in 1:37.49.

“We just kind of put it past us,” Osthelder said about the disqualification. “We decided we’ll deal with it after the meet and we have a ton of other great races to swim. I’m just glad as a team we were able to have that experience.”

Along with Osthelder’s impressive jump in the 100 butterfly, Violet McCullough made a surge in the 100 backstroke. The Madison West sophomore entered seeded 16th and finished eighth in a time of 57.38.

McCullough won her heat but was bumped off the medal stand by less than a second. Still, it’s a marked improvement from her debut last season, when she was 23rd in the event.

McCullough said being in the outside lane in Lane 8 helped quell her urge to look inside and peek at the competition.

“I wanted to stay focused and stay in my own lane; not worrying about what everyone else was doing,” she said.

The near-podium finish only has her focused on bigger and brighter things next year.

“I’m feeling on top of the world,” she said. “I went out with a bang and am ready for next season.” With non-football athletes able to sign national letters of intent for the 2023 college seasons, the State Journal is following commitments fr…