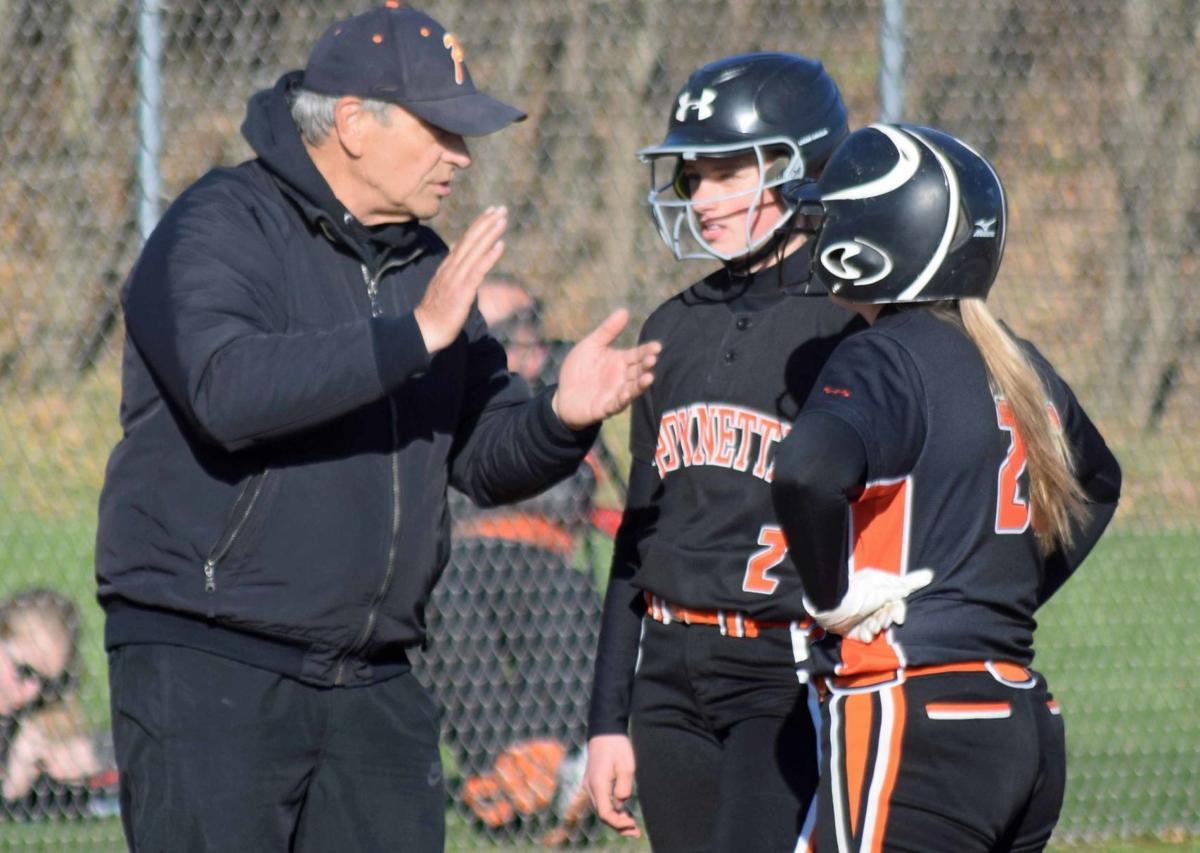 Poynette coach Bob Tomlinson addresses a pair of players during a non-conference game against Westfield in 2019. The longtime Pumas head coach officially retired after 41 seasons as head coach earlier this month. 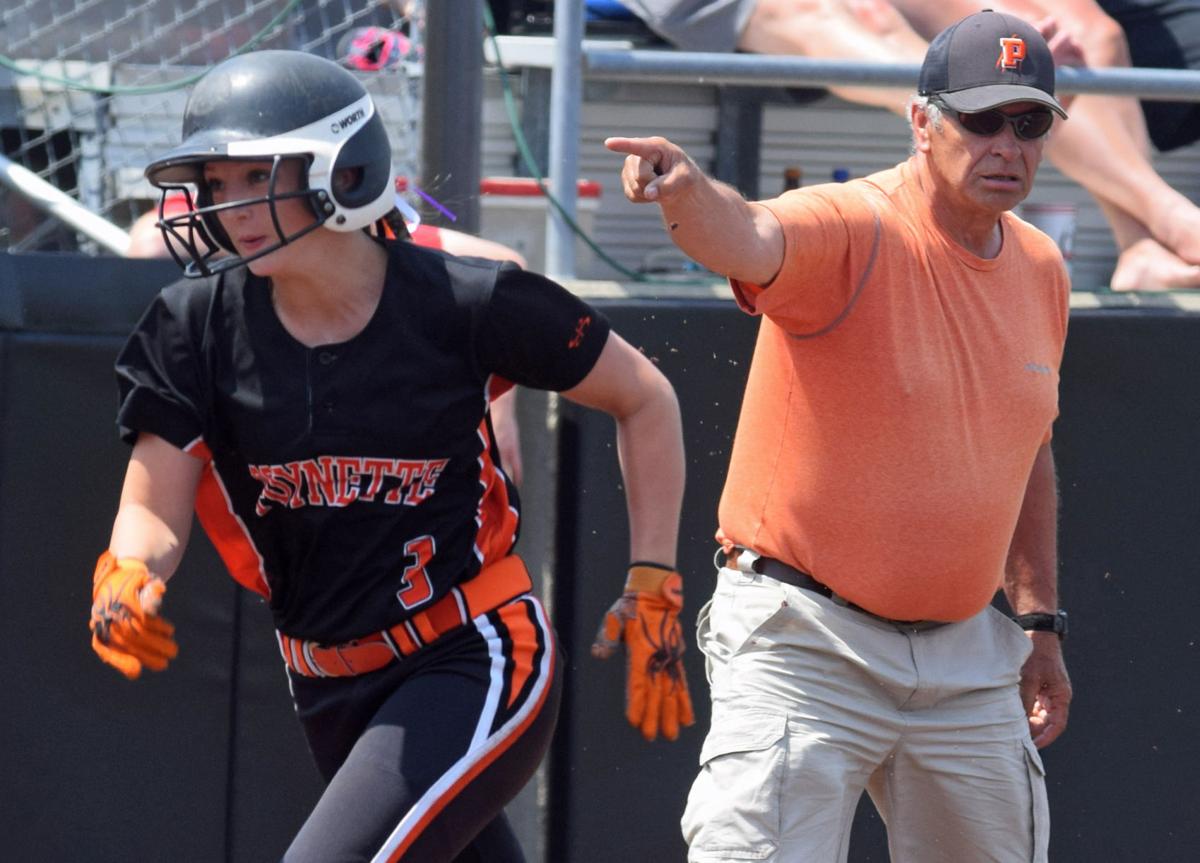 Tomlinson, right, was part of the Poynette program since its inception in 1979, was a co-head coach the following season and took over as sole head coach in 1981. During his tenure, the Pumas reached the WIAA state tournament 11 times, claiming five state championships in 1998, 2005, 2011, 2018 and 2019, as well as four more runner-up finishes.

Seeing something grow is truly special.

You nurture it. You breathe life into it. You cultivate it.

For all intents and purposes, Bob Tomlinson has been the curator of the Poynette softball program.

A 1968 Poynette graduate himself, Tomlinson has been with the Pumas softball program since its formation.

From being a volunteer assistant coach in the team’s first season in 1979 to becoming co-head coach the following season and ultimately head coach in 1981, Tomlinson has been a part of the Pumas’ pack from the beginning.

The storied career spanning four decades has reached its end, however, as the veteran manager recently retired following an illustrious 41-year run of filling out the line-up card.

There isn’t much the Wisconsin Amateur Softball Association and International Softball Congress Hall of Famer didn’t do in his time with the Pumas.

Tomlinson helped lead Poynette to five WIAA state championships, including back-to-back titles in 2018 and 2019, along with four runner-up finishes, 26 conference titles, 17 regional championships and far too many wins, all-conference honorees and lives impacted to count.

As impressive as the sheer numbers are, what’s more impressive is the transformation Tomlinson and his fellow softball lifers cultivated over the course of the sport’s inception.

“A lot of us were men’s fastpitch players at a lot of the schools; we played against each other — some of us with each other — and I believe we took how the public viewed girls fastpitch softball from what appeared to be a recreational playground activity, where we got no coverage in the newspapers,” he said.

“We never got our scores posted in any of the newspapers; whereas baseball got a full box score, we didn’t even get any scores.

“We just kept pushing and pushing, and all of us; not just me, we all just kept promoting and the game kept getting more competitive and more competitive,” he added, noting the emergence of summer softball. “It’s just taken off and girls are playing all over the country.”

After four decades worth of work, Tomlinson’s decision to retire wasn’t a simple one, despite there being a main culprit: COVID-19. Now at the age of 71, Tomlinson is very much among those at higher risk to succumb to the virus, which forced him and his wife into tight isolation from the beginning of the pandemic’s onset, and one they have rarely broken.

“We’re still isolating pretty much,” he said. “It wasn’t a really easy decision, but it was a decision that had to be made.”

Tomlinson added that the shortened season due to the WIAA’s inclusion of the alternate fall season was a deterrent after losing the entire 2020 season and three weeks of the 2021 campaign, as well as some travelling opportunities.

“I wasn’t too keen on having some of our kids test positive and us having to quarantine, or play somebody who had it and take more time off,” he said. “And my wife and I bought a motorhome last September and we haven’t used it yet. Especially May and June, and late April, that’s going to offer some opportunities to go out on the road a little bit.”

Coming back for the kids

Tomlinson’s decision to finally hang up his high school scorebook is technically his second retirement. He retired from teaching at the end of the 2011 school year, and subsequently from his head coaching position after the Pumas defeated Stevens Point Pacelli, 4-0, in the Div. 3 state championship game for the program’s third title.

Poynette’s search for a replacement wasn’t as successful, however, and Tomlinson was talked into returning in October of that same year. For Tomlinson, the decision was a simple one.

The Pumas finished runners-up in Tomlinson’s first season back and added another silver trophy to the cabinet in 2015. Poynette returned to state in 2016 but was bounced in the semifinals before snapping its seven-year title drought in 2018.

The Pumas repeated as state champions in 2019 with a perfect 30-0 season, and after winning the final 23 games of the previous campaign, will enter 2021 with a 53-game winning streak. Putting the players first truly meant a lot to Ashley Hellenbrand, who was a senior on the 2019 championship team.

“We girls put in a lot of time, and some of us even out of the offseason too, so when he said he wants us to get to where we can go and the Promised Land, meaning state,” she said. “And working together as a team to get there, so I think his way of thinking and coming back to coach was a great standpoint to say ‘You get what you put into what you love and what you want to accomplish.’”

Tomlinson's involvement with his players started much earlier than their prep careers. Casey Fountain can recall Tomlinson first helping her with her pitching when she was 8-years old. The fact that the girls got to spend so much time with him — Fountain was part of the 2020 graduating class and currently plays for Madison College — is what's really special.

"To realize we got to experience his coaching for the last time as juniors, and Ashley as a senior, I think that’s pretty special," Fountain said. "I’m so glad we got him for that long, too; we got him as a high school coach, but also as a mentor when we were little."

While winning the final game of the season has always been the goal, Tomlinson’s mission statement was simple: “Learn today, earn tomorrow.”

“Then our mission statement kind of expanded a bit to, ‘Always searching for better, no matter what you do.’”

Tomlinson’s approach to practice and games was just as unassuming: “Act as if.”

“You come to practice, it’s going to last two hours and no matter what you think of your teammates, for those two hours you have to act as if you’re best friends. Otherwise, we’ll never be able to pull out tight victories in big games,” he said.

Those life lessons have had big impacts on Hellenbrand, who recounted her first major moment in a Poynette uniform during the 2016 state tournament. Trailing 4-0 in the 2016 state semifinals, Tomlinson called Hellenbrand’s number to pitch as a freshman.

“I remember going out to the circle just nervous,” she said. “but he talked me through it and from that point on, I knew he had enough confidence in myself to be the player I need to be, and want to be, and that was basically the set-up of how the rest of my high school career was going to go.”

Hellenbrand, and Fountain as well, have both taken the wisdom Tomlinson and the entire coaching staff instilled in them during her tenure as a Puma and use currently, with the former currently in her sophomore year at UW-La Crosse.

"Even now that I’m playing at Madison College, he’s talking to me about the game, telling me what I can improve on and ‘Always looking for better,’ as he says," Fountain said.

It’s lessons that new Poynette head coach Matt Ramberg hopes Tomlinson can continue to impart into the next generation of Pumas.

“He’s been a fixture around here for a lot of years and he’s been successful, so it’s an honor to be able to step in and coach these ladies, but it’s also a big role to fill,” Ramberg said, noting that he and Tomlinson have talked numerous times over the last three weeks.

“This would be a much harder transition if Bob wasn’t around for me; he always answers my calls, is down working on the fields for me and he’s been a lot of help. I believe we’ll still see him at a lot of softball games this spring,” Ramberg added.

It’s a sentiment Tomlinson echoed in his post on the Poynette Softball Facebook page announcing his retirement. Tomlinson wrote that he “will remain on the Executive Board of the PFO (Poynette Fastpitch Organization),” and “will continue to teach the game to anyone interested in learning more about it.”

That goes beyond the ring of just Poynette players as well. During his winding career, Tomlinson said he was worked with around 200 pitchers from around the area that have gone on to earn all-conference honors.

While he doesn’t like singling out any of the Pumas teams — and there were certainly plenty — that drive to get better meant the most to Tomlinson.

“It was just a great time to experience fastpitch softball at that high a level with those girls that were just always searching to get better,” he said. “Searching for a better understanding of the game; searching for better technique and that kind of stuff.” Poynette coach Bob Tomlinson addresses a pair of players during a non-conference game against Westfield in 2019. The longtime Pumas head coach officially retired after 41 seasons as head coach earlier this month.

Tomlinson, right, was part of the Poynette program since its inception in 1979, was a co-head coach the following season and took over as sole head coach in 1981. During his tenure, the Pumas reached the WIAA state tournament 11 times, claiming five state championships in 1998, 2005, 2011, 2018 and 2019, as well as four more runner-up finishes.