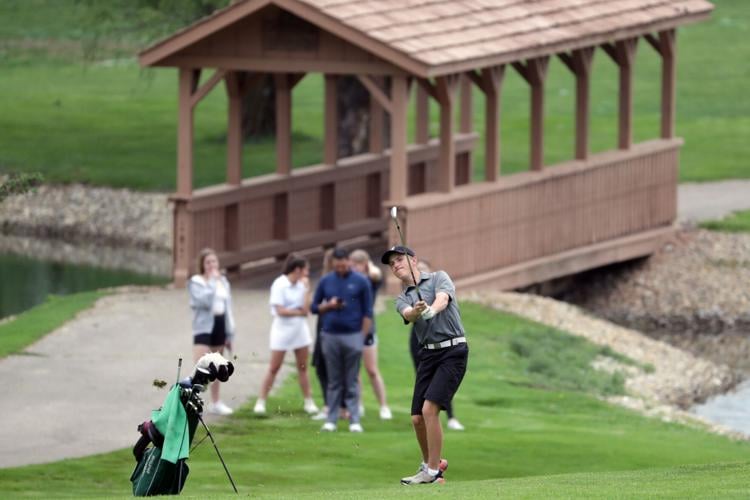 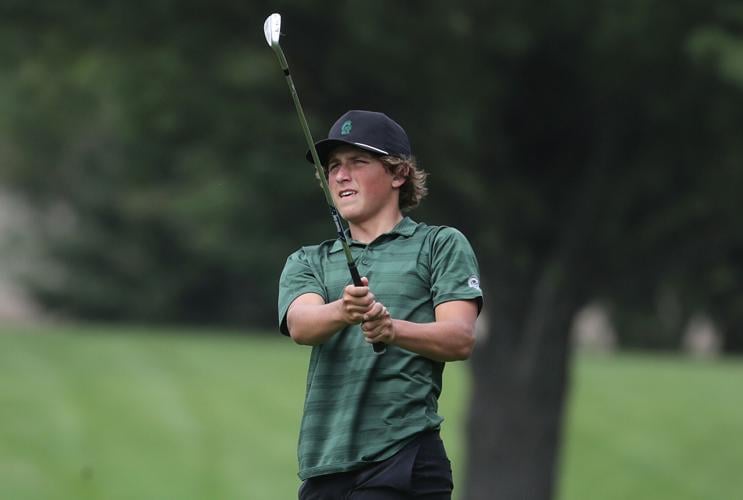 Charlie Erlandson chips onto the 17th green during the Big Eight Conference tournament May 19, 2022, at Evansville Golf Club. As tournament medalist with an even-par 72, the junior led Madison Memorial to the title. 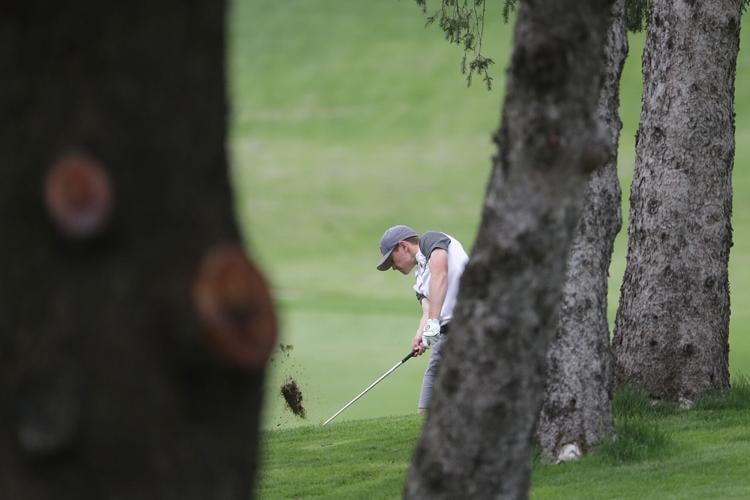 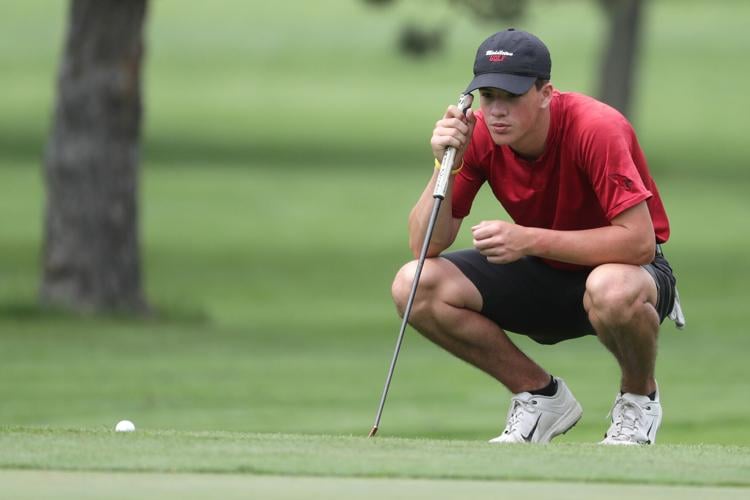 Middleton's Dain Johnson reads his putt on No. 17 during the Big Eight tournament. He shot 77 to finish fourth. 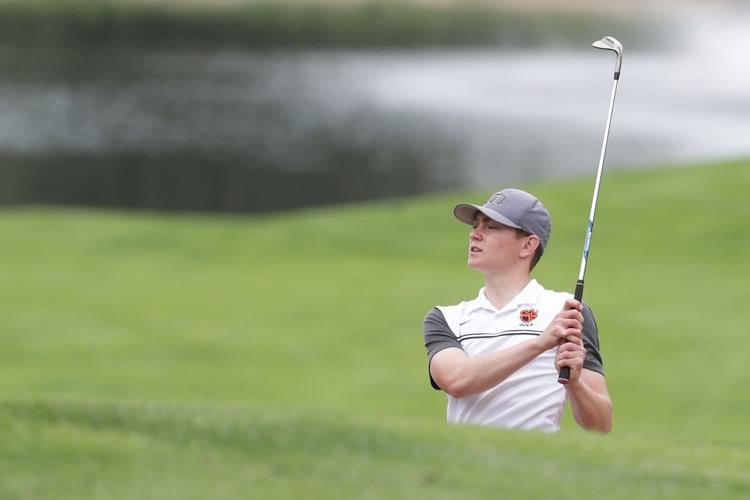 Trouble lurks on many holes at the Evansville Golf Club course.

The layout, with narrow fairways on the front nine and more open and forgiving approaches on the back nine, is difficult.

The course has been called quirky. But Middleton boys golf coach Tom Cabalka described it as a gem.

“It is a great golf course,” Cabalka said after Thursday’s Big Eight Conference tournament. “It really challenges the kids and makes the kids hit shots. And generally on a course like (it), the better team is going to win. And the better team did win.”

It was an example how each course played by area high school golfers offers a test of their skills and is one of several challenges competitors tackle entering any particular round.

Here’s a look at several of the biggest challenges that have faced golfers this season.

April was not kind to the golfers trying to hone their games.

Madison Memorial junior Charlie Erlandson, who was medalist with an even-par 72 while leading the Spartans to the Big Eight tournament title with a 308 total Thursday, said wind, cold and rain make for a dreadful combination.

Club selection, shot making and just maintaining a grip on the club can be affected by the elements. There even was an occasional snowflake in the early part of the season.

“We had wind, cold and rain a couple times last month,” Erlandson said. “It was pretty brutal.”

Waunakee coach Betsy Zadra, whose Badger East Conference team was ranked No. 2 in Division 1 in the weekly state coaches’ poll, came away impressed with the area talent despite “the cold and the wind and the lack of sunshine” earlier in the season. She said at the time the scores were “a testament to how good the golfers are.”

After players got used to the cold, the temperatures soared and now more pleasant weather has arrived. The result was another challenge: Golfers have had to adjust club choice and play two or three different yardages this season, Hartmann said.

“They are figuring it out now,” said Hartmann, whose eighth-ranked team also was the Big Eight dual-meet champion.

Blowing in the wind

Middleton sophomore Dain Johnson said wind is “a big differentiator,” separating those who can and cannot control shots.

The high winds helped make it the most unusual early season weather Cabalka could recall.

“Wind affects kids more,” said Cabalka, whose sixth-ranked team was the Big Eight runner-up, seven strokes behind Madison Memorial. “A lot of kids haven’t mastered the knock-down, keep-the-ball low shot. If they are getting that ball up high in the air, it’s tough to manage your game.”

Evansville Golf Club, Blackhawk Country Club and Maple Bluff Country Club are among the most difficult in the area, but any course is difficult when it’s windy, Hartmann said.

Figuring out the layout

Hartmann said courses that are tight off the tee and players’ ability to hit a long iron onto the green are major challenges for high school golfers.

Evansville is tight and tree-filled.

“No matter how you hit it off the tee, you were playing over the trees all day,” said Madison Memorial senior Isaac Schmidt, the Big Eight runner-up with a 74. “As long as you were prepared for that, you were able to play pretty well.”

Unfamiliarity with a course or one like it increases the challenge.

“They have to figure out their way around the course,” Sun Prairie coach Steve Braatz said. “You might not see where the dogleg is. There are blind shots, and that is the biggest challenge.”

Erlandson said many rounds at Blackhawk Country Club prepared him for the tighter fairways and quick greens at Evansville.

Johnson played Evansville for the first time and was fourth with a 77.

“It means you play a lot more conservatively,” Johnson said. “You have to play to the middle. It’s a lot harder to score.”

Confidence on the course

Players’ expectations also factor into their play this time of year when league titles, all-conference honors and postseason goals hinge on the results. WIAA regionals begin next week.

“The mental aspect of it is the most challenging,” Braatz said. “If you don’t do well early on (in a round), it is hard to re-energize your mental approach. Energy management is a big thing — how you manage the highs and lows. … But that’s what makes it fun — to attain that sense of accomplishment.”

The golfers can’t permit a bad shot or putt to linger and undercut their round.

“I just try to think about the next shot and really focus on my swing, and swing how I know I can swing,” said Middleton sophomore Charlie Jambor, third with a 76 at the Big Eight tournament.

The snowball effect must be eliminated.

“It’s all about not letting it get in your head and making sure the last shot doesn’t affect the next shot,” Erlandson said.

He believed he turned in a strong round Thursday despite not hitting his tee shots as well as he wanted.

“But the ball got in the hole fast enough, so that’s all that matters,” Erlandson said.

How an early mark is a winning formula for high school shot put, discus competitors

“Just move on,” Waunakee's Ian Phebus said. With that goal in mind, how aggressive are high school shot put and discus athletes with their tries? When is it time to dial it back and when is it time to go all out?

The boys state individual tennis tournament gets under way Thursday at the Nielsen Tennis Stadium in Madison. Here's a primer to get you ready for the action.

8 things to know about the WIAA boys golf state tournament

Charlie Erlandson chips onto the 17th green during the Big Eight Conference tournament May 19, 2022, at Evansville Golf Club. As tournament medalist with an even-par 72, the junior led Madison Memorial to the title.

Middleton's Dain Johnson reads his putt on No. 17 during the Big Eight tournament. He shot 77 to finish fourth.