The Sun Prairie East football team has speed in abundance and demonstrated that Friday night.

Senior running back Cortez LeGrant, a sprinter during track and field season, scored four first-half touchdowns in leading Sun Prairie East to a 52-7 victory over Oregon in a Badger Large Conference game.

"They had speed and strength," Oregon senior tight end Charles Daguanno said about the Cardinals. "They had everything. ... It all happened so fast."

The 5-foot-11, 175-pound LeGrant rushed for three touchdowns and had a touchdown reception for the Cardinals (4-2, 3-1 Badger Large), who won their third consecutive game in convincing fashion.

"My speed really helped," LeGrant said. "I'm fast, but I work at it. I work on my legs. (My teammates) push me to be the best I can be, so I can be the best for them. I work out in the morning. I work hard after school. I practice hard. We practice like game-day speed, so when the game day comes, we are ready."

Senior quarterback Jerry Kaminski, a University of North Dakota commit, threw three touchdown passes and ran for another against Oregon (4-2, 3-1), which entered the game as the conference co-leader with Waunakee.

"From the get-go, they were bigger, stronger and faster than us," Oregon coach Dan Kissling said. "Both those kids, (LeGrant) and Kaminski, they are way above everyone here. We've had a really good season and we are going to have a good season, but we can't match their speed.

"We had him (LeGrant) boxed in a couple times for a 4-yard gain and the kid reverses field and he goes for a touchdown. He's the real deal."

The Cardinals, ranked second in Division 2 in the WisSports.net coaches’ poll, raced to a 21-0 lead after the first quarter and were ahead 28-0 in the second quarter before the Panthers scored.

After the teams exchanged fumbles, Sun Prairie East scored the game’s first touchdown on a 37-yard pass from Kaminski to LeGrant with 8 minutes, 58 seconds left in the first quarter.

On the Cardinals’ next possession, sophomore receiver Cooper White took a toss from Kaminski in the backfield and swept right 66 yards for a touchdown, cutting back into the middle of the field and outsprinting defenders for the score with 5:09 remaining in the first quarter. Kaminski was credited with a touchdown pass on the play.

LeGrant was back at it on Sun Prairie East’s next possession, sweeping right for a 29-yard touchdown run and a 28-0 lead with 8:57 left in the second quarter.

The Panthers, whose potent running game was bottled up by the Sun Prairie East defense, took to the air in breaking onto the scoreboard. Senior quarterback Cameron Gates fired a 6-yard touchdown pass to the 6-foot-5 Daguanno with 5:07 remaining in the second quarter, cutting Oregon’s deficit to 28-7.

Gates’ 27-yard completion to Daguanno and two pass interference penalties on the Cardinals helped the Panthers on the 80-yard scoring drive.

Sun Prairie East then scored the final 17 points before halftime and took a 45-7 lead into the break.

LeGrant scored on a 65-yard run with 4:00 left in the half and Kaminski fired a 31-yard touchdown pass to junior receiver Connor Stauff with 1:18 remaining. After Oregon lost a fumble at the Sun Prairie East 35-yard line, Kaminski completed a 27-yard pass to senior receiver Jonathan VandeWalle to the Oregon 8-yard line.

Cardinals senior Trevor Schulz kicked a 25-yard field goal with 2 seconds left in the first half.

"We made some big, explosive plays tonight," Brian Kaminski said. "That's what we've been able to do here the last three weeks. We have to continue to take care of the football. We had one drive where we had few too many penalties. We've got to shore that up. Really, that touchdown drive (by Oregon) was a lot of penalties on us. I'm really proud of our energy. I thought our kids played confidently. They played fast. They executed pretty well tonight."

Oregon and Waunakee, top-ranked in Division 2 in the WisSports.net coaches’ poll, entered Friday leading the Badger Large, with Sun Prairie East and Milton each a game behind.

Waunakee took over sole possession of first with a victory over Sun Prairie West on Friday.

The Cardinals build a 34-7 halftime and cruise to a 54-7 victory over the Wolves,

Verona turns to La Follette for next boys basketball coach

Curtrel Robinson won a state title as a player at La Follette before becoming the Lancers' boys basketball coach. He's been hired to coach a Big Eight Conference foe.

The Badgers enter "The Horseshoe," Ohio Stadium before their primetime matchup against the Buckeyes

The Badgers enter "The Horseshoe," Ohio Stadium before their primetime matchup against the Buckeyes 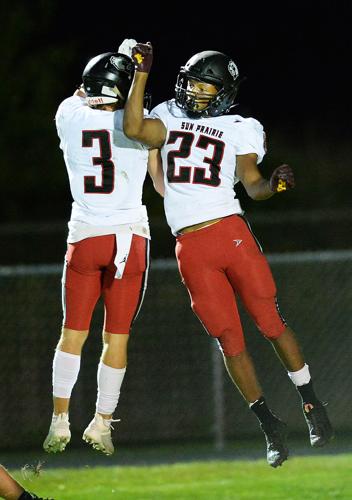 Sun Prairie East's Cortez LeGrant (23) celebrates one of his four touchdowns with Connor Stauff, against Oregon. 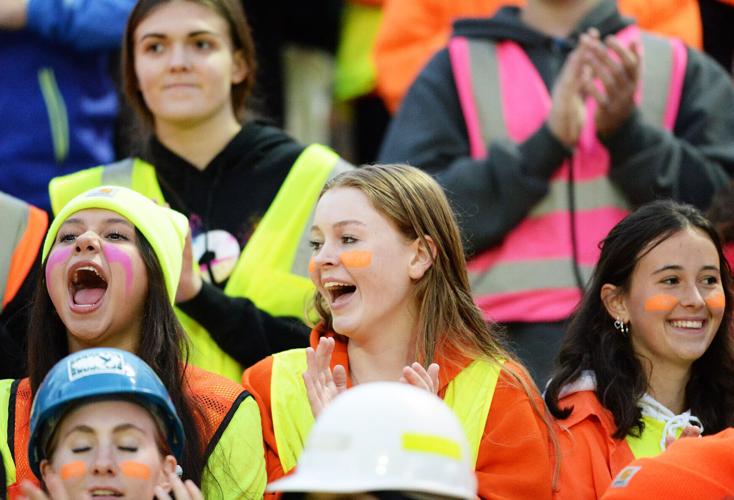