The Columbus football team will play for its third Division 4 title when it competes in this week’s WIAA state championships at Camp Randall Stadium.

The 46th state football championships are set for Thursday and Friday.

Here are several things to know:

The WIAA uses GoFan Ticketing for all digital and cashless tickets that cost $11 plus online fees for adults and students. An all-day pass for Thursday’s games is $30 plus online fees, while an all-day pass for Friday costs $25. Tickets must be redeemed on a mobile device and can be purchased at wiaawi.org/Tickets. Children 2 years old or younger do not need a ticket.

All championship games also will be streamed live on the Bally Sports app with registration and cable system authentication, and digitally on Bally Sports Wisconsin Plus through a subscription at ballysportsplus.com.

The Division 7 title game between Eau Claire Regis and Shiocton kicks off the two-day festivities at 10 a.m. Thursday, followed by Mondovi taking on Stratford in the Division 6 final at 1 p.m. La Crosse Aquinas and Mayville meet in the Division 5 title game for the second straight year at 4 p.m. while Waukesha Catholic Memorial defends its title against Columbus in the Division 4 final at 7 p.m.

Only two returning champions are making the trip back to Camp Randall. Catholic Memorial has won each of the past two Division 4 state titles, taking down Ellsworth 21-12 last year following a 35-0 victory over Kiel in 2019. There were no state title games held in 2020 due to COVID-19.

Aquinas also returns looking to defend its title won last year in Division 5. The Blugolds pulled out a 28-26 win over Mayville and must get past the Cardinals again for their third state crown. It’s the 10th rematch in state history, with the previous year’s winner repeating five of the last nine times.

Mondovi is the lone qualifier this season to have never won a state championship. The Buffaloes finished as runners-up in their only other state appearance in 1990, falling to Columbus 26-19 in the Division 4 final.

Kimberly and Stratford became the seventh and eight schools with double-digit state championship appearances as they are back at Camp Randall for the 10th time each.

The Cardinals' senior quarterback leads the Madison-area contingent as a WFCA All-State selection.

After a run of nine appearances in 12 years dating back to 2007, Kimberly is back in the state championship for the first time since 2018. The Papermakers, who shared the Fox Valley Association title with Neenah, enter on a six-game winning streak.

Kimberly (12-1) doubled up Bay Port 42-21 in their Level 4 semifinal and boast one of the state’s most balanced offenses. The Papermakers, who average 36.7 points per game, have 2,599 yards and 39 touchdowns on the ground and 2,383 yards and 26 through the air and are paced by Blake Barry, who has rushed for 1,770 yards and 28 touchdowns on 261 carries, averaging 6.8 yards per attempt. Seth Miron has thrown for 2,328 yards and 26 touchdowns with just four interceptions, completing 71.7% of his passes.

Mukwonago (12-1) makes its second state appearance, last winning the Division 1 title in 2004. The co-champions out of the rugged Classic Eight Conference, the Indians pulled away from Sussex Hamilton 47-21 in Level 4. Coach Mike Gnewuch relies on a more run-heavy approach and for good reason: Wynn Stang has impressed all year, racking up 2,761 yards rushing and 42 touchdowns while averaging 8.5 yards per carry.

Mukwonago, which has won five straight, isn’t afraid to pass. The combo of Evan Herbig and Tyler Schult has thrown for 1,533 yards and 14 touchdowns with just five interceptions.

Kettle Moraine (10-3) is the lone three-loss team to qualify for state this season but the Lasers have proven how beneficial the defeats have been. returning to state for the first time since 1988. After opening the season 1-2, Kettle Moraine has won nine of its past 10 games, including a 7-0 victory over Brookfield Central in Level 4.

Coach Matt McDonnell has one of the best quarterback-wide receiver duos in the state in Chase Spellman and Drew Wagner. Spellman, a University of Wisconsin target, has thrown for 1,916 yards with 21 touchdowns and eight interceptions, connecting with Wagner 47 times for 888 yards and nine scores. A balanced rushing attack has yielded 1,991 yards and 22 scores.

The Papermakers (11-1) took the lead on their first possession and never looked back while jumping out to a 31-3 lead on three touchdowns by senior running back Blake Barry.

West De Pere didn’t wait nearly as long returning to Camp Randall as it’s back at state for the fourth time after a two-season hiatus. The Phantoms (12-1), who finished runner-up in the Fox River Classic North Conference, pulled away for a 26-7 win over Kaukauna in the semifinals.

Najeh Mitchell is one of the state’s most elusive running backs, having piled up 1,679 yards and 27 touchdowns. Quarterback Duke Shovald has thrown for 2,257 yards and 23 touchdowns with just three interceptions while completing 64.1% of his passes. He’s connected with six receivers, each with over 200 yards.

After nearly snapping a 25-year drought last season, Monroe is back at state for the first time since 1996. The Cheesemakers (13-0) steamrolled their way back to Camp Randall Stadium with a 48-6 win over New Berlin West in the semifinals.

The undefeated Rock Valley Conference champs field the state’s most fearsome rushing attack, having rolled up 5,166 yards and 79 touchdowns in coach Toby Golembiewski’s triple-option. Alex Hernandez (172 carries, 1,487 yards, 16 TDs) and Keatin Sweeney (132, 1,322, 23) lead the way but the Cheesemakers have three other running backs who have at least 400 yards and helped the team average 9.2 yards per attempt.

West Salem (12-1) returns to for the first time in 15 years after last winning the Division 4 state championship in 2007. The Panthers, who won the Coulee Conference, have won 12 straight games after beating Onalaska 37-14 in the semifinals, avenging a 14-13 loss in Week 1.

Dual-threat quarterback Brett McConkey has accounted for over 2,400 total yards, including 1,753 through the air, and 26 total touchdowns. Luke Noel (184 carries, 1,135 yards, 26 TDs) leads the way on the ground, while Brennan Kennedy (37 catches, 798 yards, eight TDs) is McConkey’s top receiving target.

Following its state semifinal defeat to Catholic Memorial last season, Columbus gets another shot at the reigning two-time champions. The Cardinals, who won the Capitol Conference, topped Freedom 32-16 in Level 4 to secure their state final berth for the first time since 1996.

Columbus (13-0) looked dominant all season, winning by an average of 39.4 points per game, with the semifinal win the only game decided by two scores or less. Pacing the Cardinals’ unbeaten run is the state’s highest-scoring offense averaging 48.7 points per game thanks to a punishing ground game.

Junior Colton Brunell has rushed for 2,711 yards and 41 touchdowns on 281 attempts. Columbus’ all-time leading rusher is averaging 9.6 yards per carry and a whopping 208.5 per game. Brunell isn’t a one-man show, however, as Nathan Cotter has thrown for 1,565 yards and 25 touchdowns with just four interceptions to a solid receiving core that features four players with at least 240 yards receiving.

Catholic Memorial (13-0) has buckled down when it needed to in order to reach its ninth state final appearance. The Crusaders, who won the Parkland Conference, grinded out a 20-14 win over Two Rivers in the semifinals to return to the final for the fourth time in five seasons in which championship games have been held.

Coach Bill Young’s team has a balanced offense that has produced nearly 3,200 yards of offense and 64 touchdowns. Running back Corey Smith accounted for over 1,300 total yards and 25 touchdowns. The junior, who holds a scholarship offer from UW among others, has a team-high 1,119 yards and 23 scores on just 133 carries. He gets the benefit of running behind Donovan Harbour, a 6-5, 320-pounder who also has a scholarship offer from the Badgers.

La Crosse Aquinas traversed its way back to state with a chance at capturing back-to-back championships after last year’s win ended a 14-year title drought. The Blugolds (12-1) raced away from Kewaunee 44-19 in the semifinals.

Aquinas’ offense has been able to adapt all season long, but four-year starting quarterback Jackson Flottmeyer makes things go. The senior has thrown for 2,273 yards and 28 touchdowns with eight interceptions, while three running backs have each rushed for 325 yards or more for the runners-up of the Coulee Conference.

Mayville (13-0) returns to state looking to end a title drought that dates to 1994. The Cardinals faced little opposition in the regular season en route to a second straight Flyway Conference title and allowed just eight points until the state semifinals before outlasting Prairie du Chien 26-21.

There’s no question who fuels the Cardinals as running back Blake Schraufnagel has rushed for 2,478 yards and 39 touchdowns on just 210 carries, an average of 11.8 yards per attempt. Coach Scott Hilber’s bunch can throw it as well, with Adison Mittelstadt passing for 1,307 yards and 15 scores with just two interceptions.

Stratford is making its 10th state appearance and first since 2019. The Tigers (10-2) have a shot at an eighth title after beating St. Mary’s Springs 20-14 in overtime in the semifinals. Braeden Schueller has thrown for over 1,600 yards and 20 touchdowns while Koehler Kilty has 1,685 rushing yards and 18 scores.

Eau Claire Regis (13-0) will try to win its third state title in the Ramblers’ first appearance since 2019. The Cloverbelt Conference champs throttled Bangor 43-7 in the semifinals and have surrendered no more than 23 points in a game. Three ball carriers have at least 500 yards and double-digit touchdowns, led by Jack Weisenberger’s 1,053 yards and 14 scores.

Shiocton returns to state for the first time since 2013 when it won its lone title in Division 6. The Chiefs (11-2) earned a 21-19 win over Cashton to end their near-decade long drought. A balanced passing attack fuels Shiocton’s offense as four receivers have at least 200 yards and 20 catches, led by Bennet Schmidt with 724 yards and four scores on 42 receptions. Quarterback Dawson Schmidt has thrown for 1,745 yards and 17 scores with 15 interceptions. Tucker Markham ran for four touchdowns as the Cheesemakers defeated West Salem and earned their first title since 1994.

The Papermakers (11-1) took the lead on their first possession and never looked back while jumping out to a 31-3 lead on three touchdowns by senior running back Blake Barry.

Colton Brunell ran wild, a kicker got a second chance and the defense stood tall as the Cardinals won their third title in program history over the two-time defending champs.

The Cardinals' senior quarterback leads the Madison-area contingent as a WFCA All-State selection. 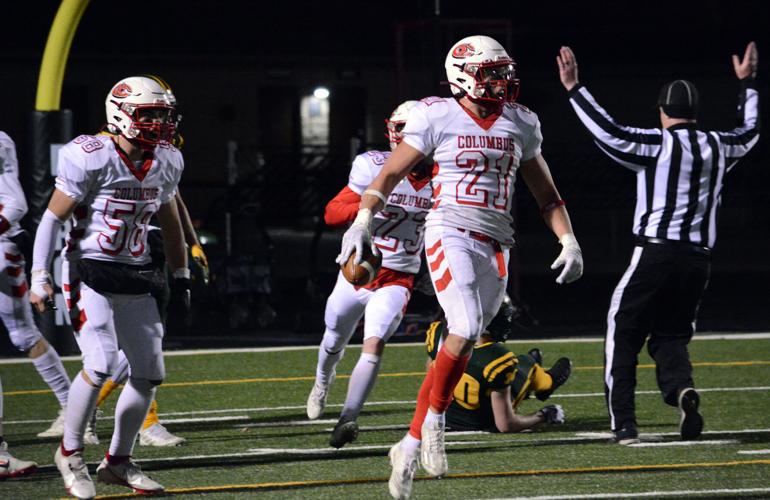 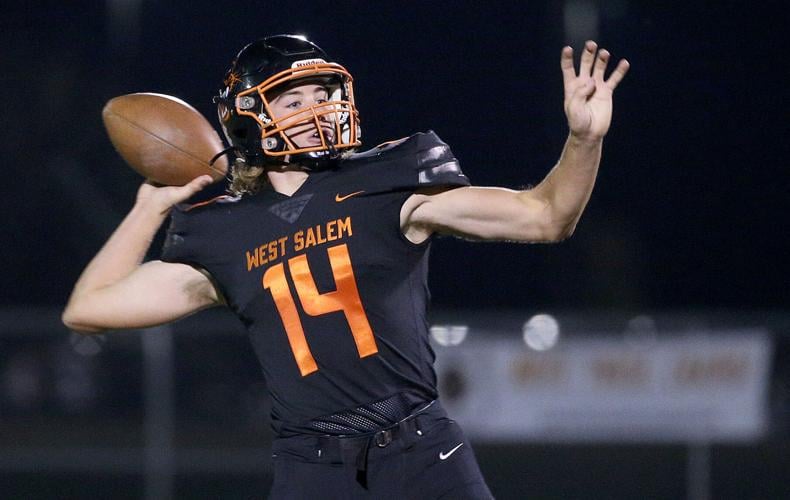 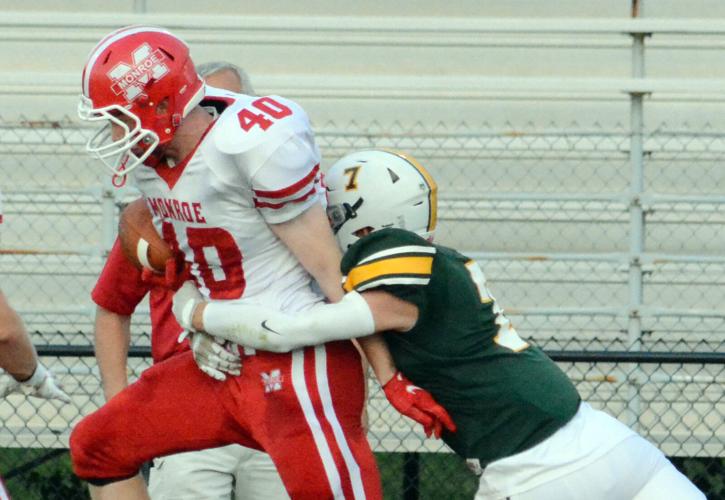 Monroe's Charlie Wiegel tries to escape a tackle from Beaver Dam's Eli Bryant during a non-conference season opener on Aug. 19. 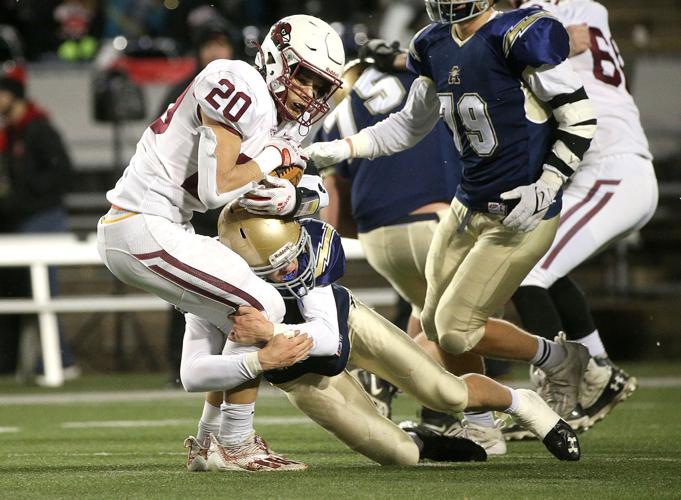 Mayville's Blake Schraufnagel tries to slip out of a tackle by a pair of La Crosse Aquinas defenders during last year's WIAA Division 5 state championship game.