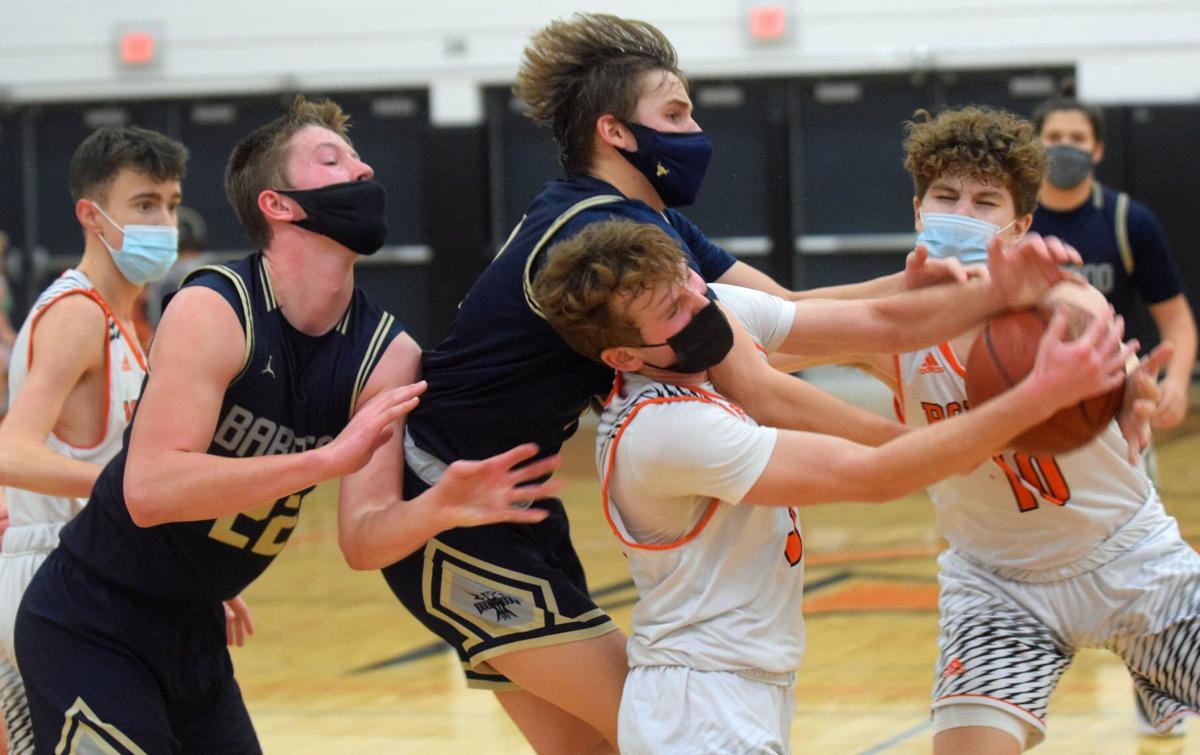 Baraboo sophomore Drew Mistele, center, reaches for a rebound against a pair of Portage players during a non-conference game last season. 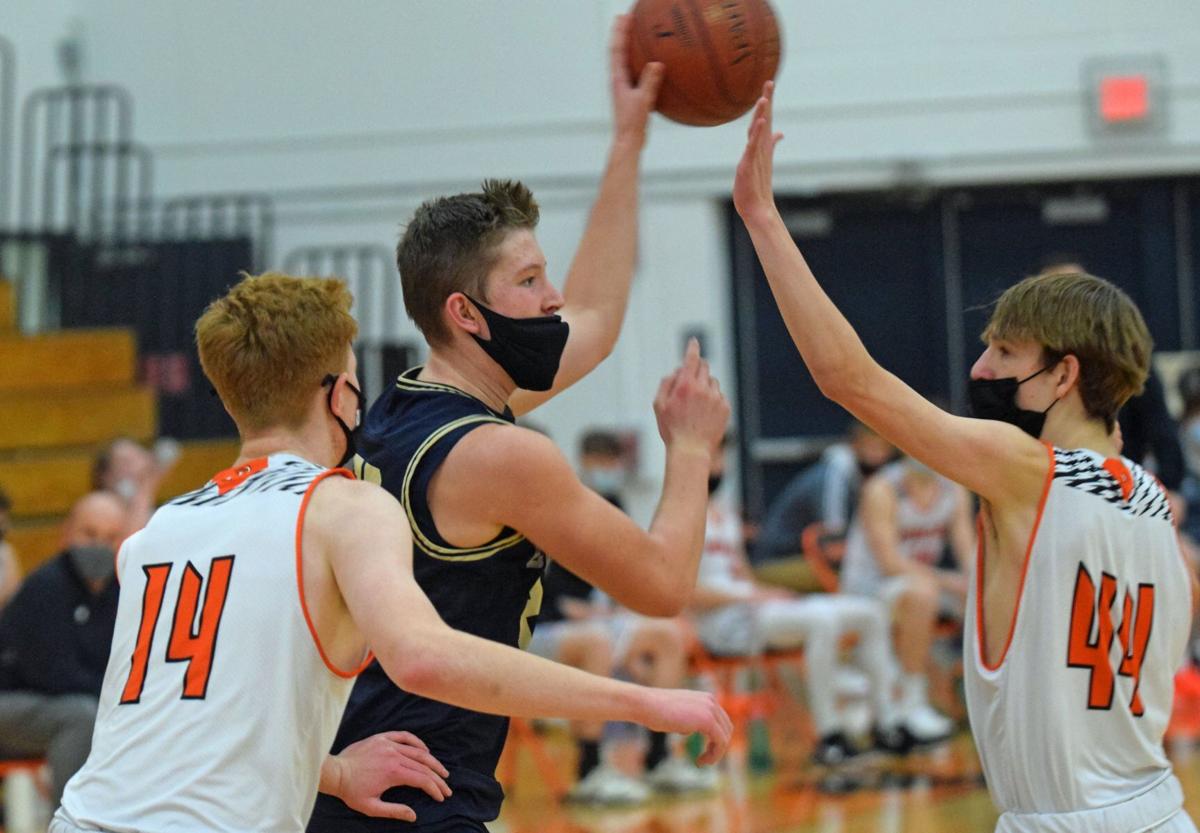 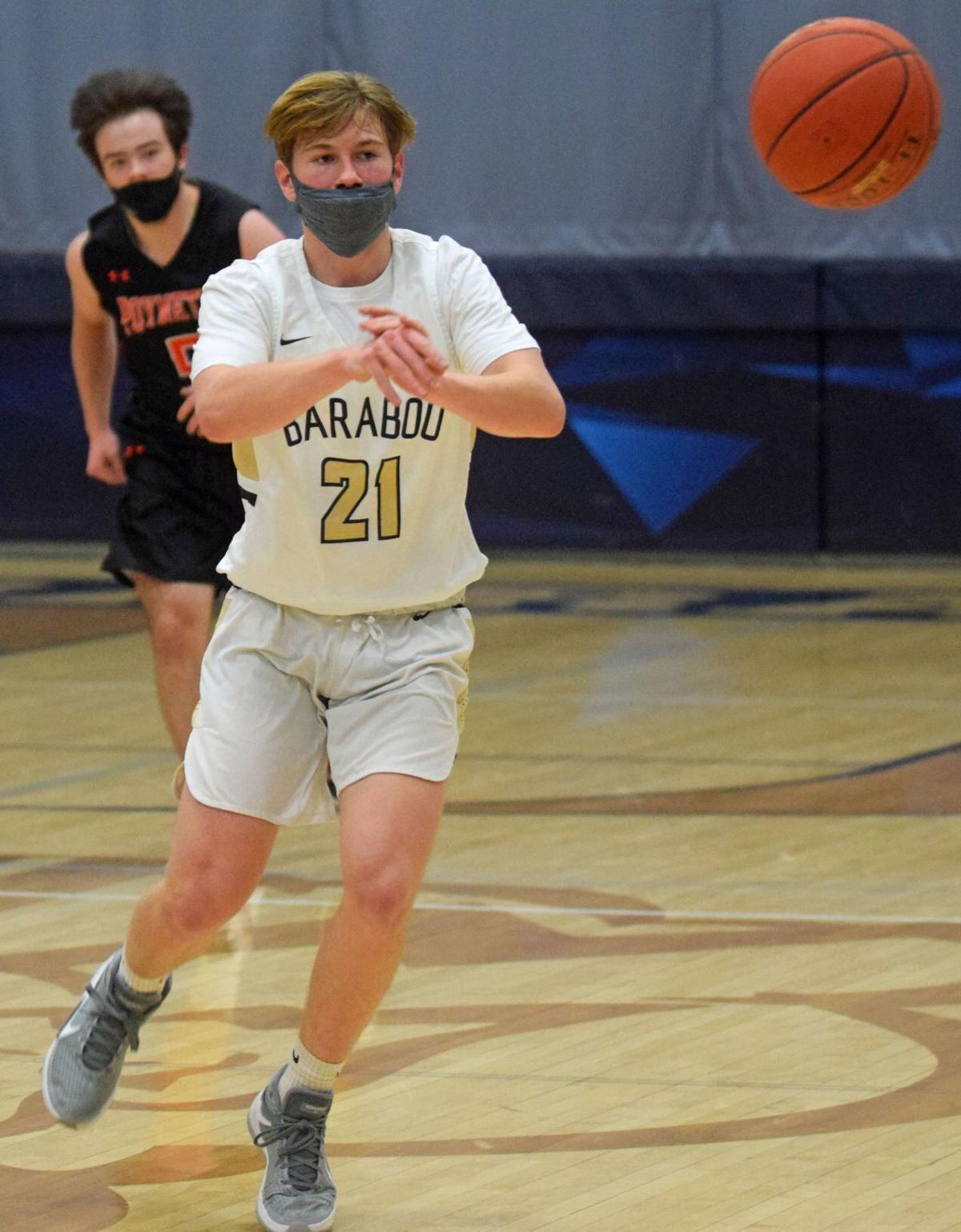 Baraboo sophomore Luke Vittengl fires a pass to the corner during a non-conference game against Poynette last season. 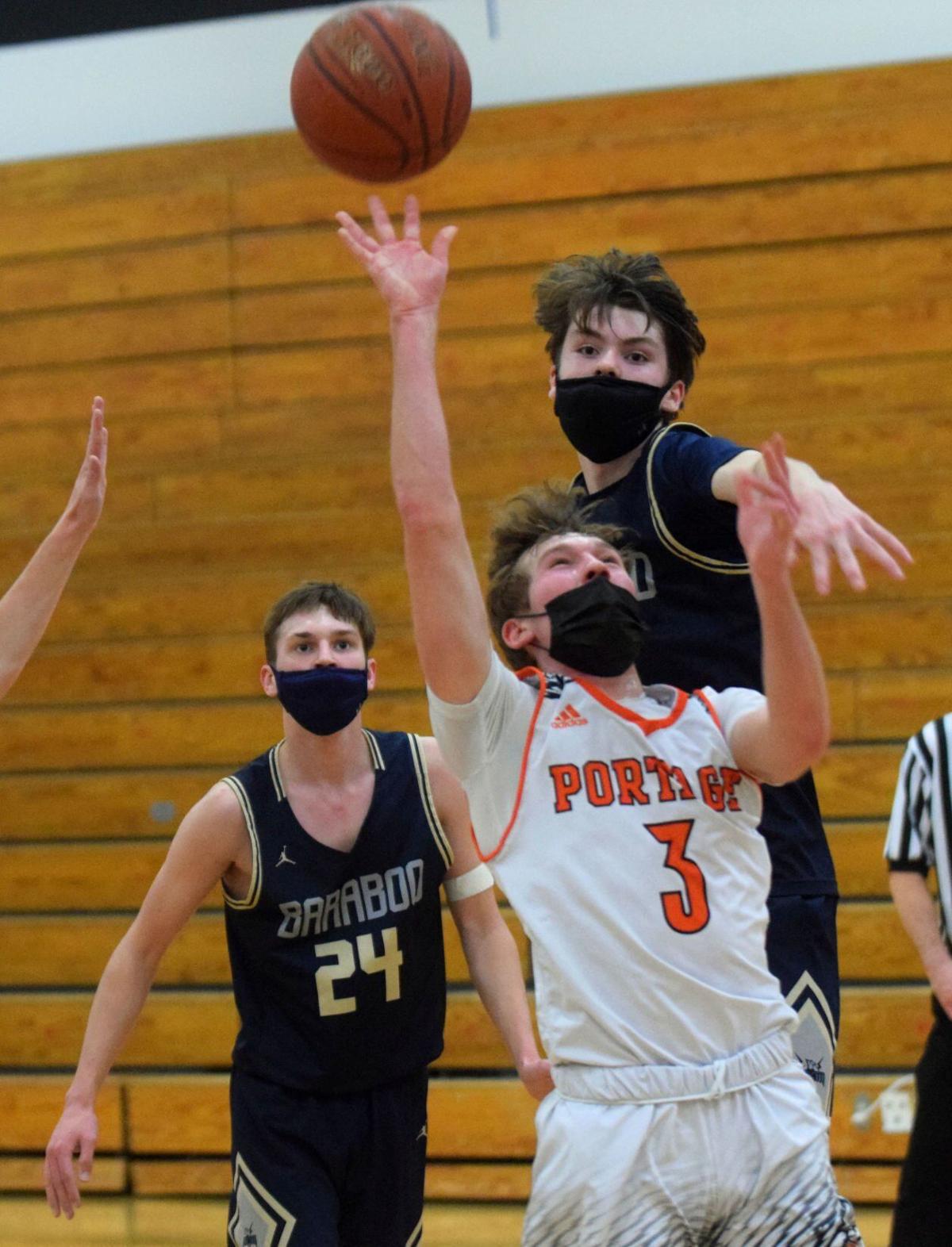 On the one hand there’s a fair bit of “baptism by fire,” with the newcomers needing time to adjust to pace of play and likely seeing few marks on the right side of the ledger. However, those early woes could be well worth the wait.

Baraboo prep boys basketball coach Tyler Fish is hoping the latter is the case for this year’s Thunderbirds team, with a hardened group of returnees back after taking some lumps last winter.

“We took some growing pains last year and feel a little more confident this year because we had some guys get varsity reps, and we do return some guys who saw some serious time, so we’re really excited about that,” Fish said.

The area where the T-Birds gained a large chunk of that experience is in the backcourt and at the point guard position. It’s where Baraboo was at its youngest last year and where Fish took a big risk by playing junior Drew Mistele and sophomore Luke Vittengl.

Mistele started the year as part of the varsity lineup while Vittengl got called up early on in the season. While it didn’t equate to much success — Baraboo finished last year just 3-19 overall — and the pair’s experience was evident, Fish is encouraged about what the pair put together in the offseason.

“Last year you could definitely see the ‘deer in the headlights’ look at times, and it’s just what a whole ‘nother year of weight room and playing a lot of basketball will do for you,” he said of Mistele and Vittengl, who averaged 6.7 and 4.9 points per game, respectively.

“Just the way they act and the way they attack practice, they’re just mature people and I’m really excited for those two. I feel a lot better in the back court when I did last year.”

Fish also feels good having the team’s second-leading scorer from last year, Gabe McReynolds, back once again. The 6-foot-6 forward tallied 11.3 points and 7.8 rebounds per game last winter in his second varsity season.

And after increasing his scoring total eight points from his sophomore season, Fish is anxious to see what McReynolds can do in his senior campaign coming off a strong football season.

“He’s ready to go and he’s a guy who’s worked really, really hard to change his body and turn himself into a really, really good athlete,” Fish said. “He had a really good football season and he’s going to get a lot of attention from people around the league, so we’re going to have to be ready to step up because he’s going to get doubled all the time, like he did at times last year, and we have to be ready to counter that.”

Among those players Fish will turn to when opposing teams put the clamps on McReynolds are seniors Brady Kelly and Drew Bromley. Both players saw some minutes here and there last season, something that will undoubtedly change after the graduation of seven seniors.

The pair have already shown they appear up to the challenge.

According to Fish, he challenged Kelly, another 6-6 forward, to “get a little bit tougher and be a better rebounder.”

“The first few days of practice he looks a completely different player, in a good way,” Fish said.

As for Bromley, the 5-9 guard has endless energy and an infectious attitude where Fish described him as “probably one of the most positive kids I’ve ever been around.”

“He lights up everybody … he’s funny, he’s a great teammate and I don’t think anybody would have anything bad to say about him,” Fish added. “He’s just a high IQ player that’s going to see a lot of minutes for us.”

Fish also expects the 6-7 forward duo of junior Derek Gehin and Ross Liegel to play contributing roles as well. The pair’s length, alongside that of Kelly and McReynolds, plus 6-6 sophomore Kyle Felt, presents Fish with a luxury he hasn’t had in his brief three-year tenure leading the T-Birds.

“I’ve never coached a team this big and long before,” he said.

Fish added that he and his staff and trying to make the most of those unteachable attributes defensively, and he also believes his group can be one of the best rebounding units in the Badger West Conference.

“I think that’s definitely an advantage for us,” he said.

One area that could hurt the T-Birds early on is an unestablished bench. With only six players back from last year’s team, Baraboo once again has limited varsity experience, creating an unknown rotation for Fish.

That doesn’t mean he hasn’t tried putting that to good use. The lack of depth has created plenty of competition among the T-Birds’ ranks and a blessing in disguise for Fish.

“It’s a unique team and I keep telling our guys ‘iron sharpens iron,’” he said. “We have our best guys going at it in practice and I just feel like our practices are more intense and we’re getting better, more so than in the past.”

That will be needed as Baraboo gets a partial new crop of opponents with the Badger Conference’s East/West realignment. While the T-Birds will still face familiar foes like Waunakee, DeForest and Beaver Dam once a season, Baraboo adds the likes of Oregon, Monroe and Madison Edgewood to their schedule.

Longtime rivals Portage, Reedsburg and Sauk Prairie also remain on the schedule as part of the new North Division of the Badger West, and according to Fish, still carry the most excitement.

“Those are schools that these guys have seen since third grade club basketball, where it’s like we know all of those teams pretty well,” he said. “and just the competition is something where we want to take care of those three teams initially.”

The hunger and competition is certainly there already with a majority of this year’s team coming off successful fall seasons in football and basketball. Fish and his staff have just tried to keep that level up.

“Kind of like the word of the year so far has been ‘compete,’ and to just get better.”

Baraboo will get its first chance to do just that tonight when it hosts Poynette in a non-conference season opener. Photos of the Baraboo and Portage boys basketball teams meeting in a non-conference game on Saturday, Dec. 19 at Portage High School. The Thun…

Baraboo sophomore Drew Mistele, center, reaches for a rebound against a pair of Portage players during a non-conference game last season.

Baraboo sophomore Luke Vittengl fires a pass to the corner during a non-conference game against Poynette last season.