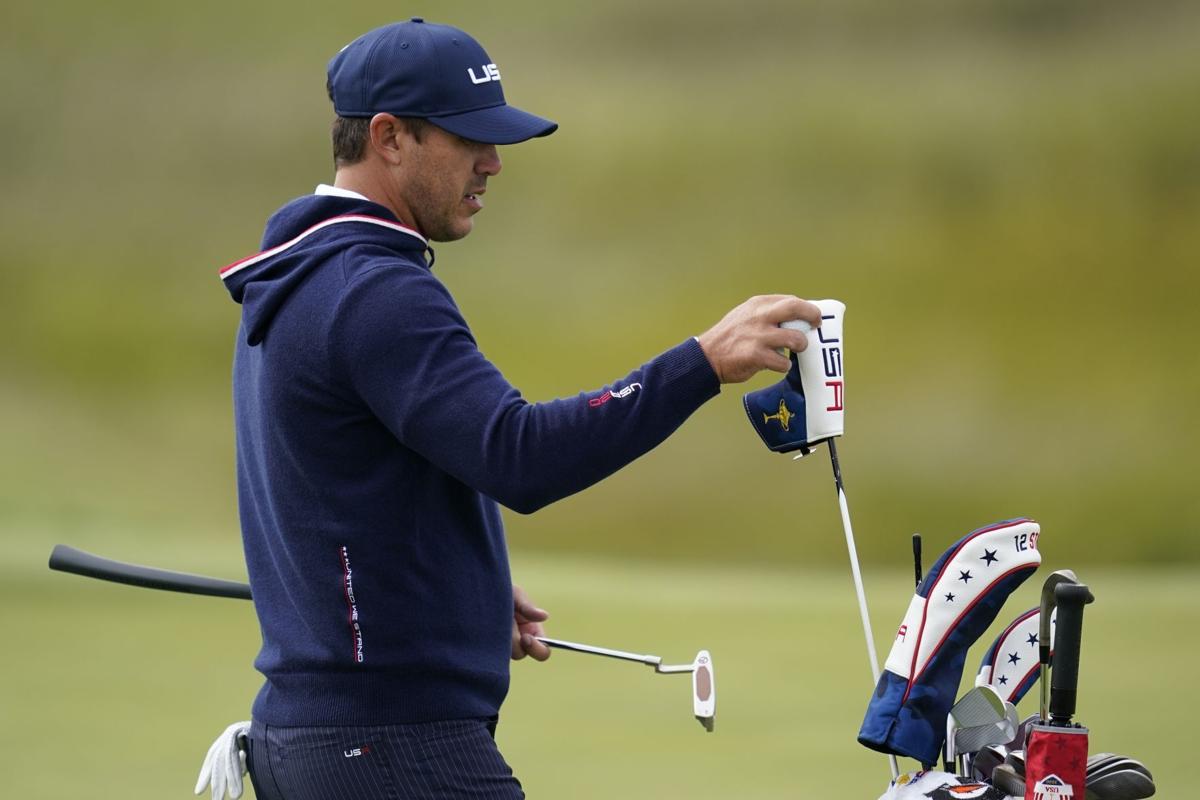 Team USA's Brooks Koepka gets a club on the 10th hole during a practice day at the Ryder Cup at the Whistling Straits Golf Course Wednesday, Sept. 22, 2021, in Sheboygan, Wis. (AP Photo/Ashley Landis) 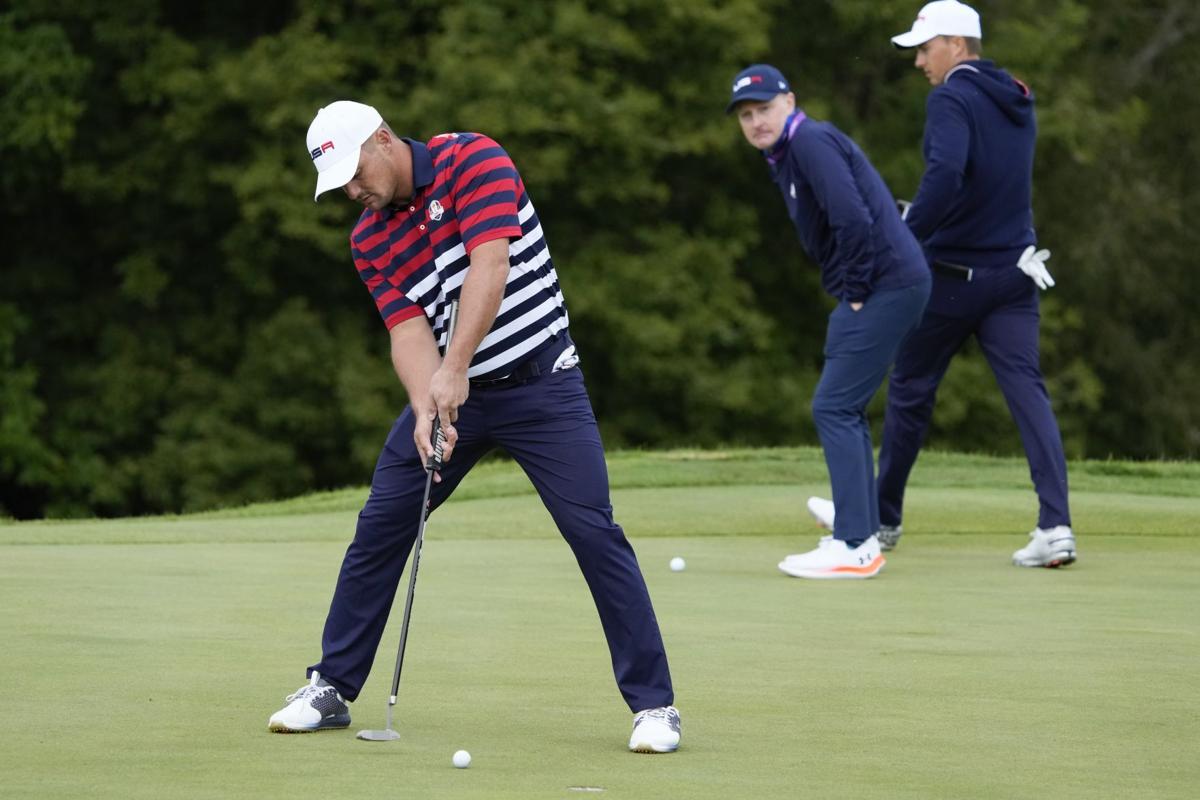 SHEBOYGAN — The video put out by the U.S. Ryder Cup media staff tried to say one thing. The body language from Brooks Koepka told a different story.

Yes, he’s teammates for the week with Bryson DeChambeau and 10 other guys, charged with regaining the Ryder Cup on home soil. But his feud with the long hitter isn’t over by any stretch.

“We are on the same team together,” Koepka said in somewhat cryptic remarks Thursday. “We’ve had dinner almost every night as a team.”

Where they sat at the table is probably another story, and Koepka wasn’t in a mood to offer any more details. Suffice it to say no one expects them to be drinking from the Ryder Cup together should the U.S. find a way to turn back the Europeans at Whistling Straits.

That’s despite DeChambeau teasing earlier in the week that there might be “something fun” that comes out during the Ryder Cup about his relationship with Koepka.

“I have no idea,” Koepka said, hands on hips, when asked what that meant. “I didn’t listen to the comments or hear what he said, so I have no idea.”

Koepka’s dislike of DeChambeau is no secret, though he hasn’t spelled out just what irritates him most about his new teammate. It seemed to begin with DeChambeau’s penchant for slow play and spread as the two sniped at each other over the last year on social media.

Then, of course, there was Koepka famously rolling his eyes during a Golf Channel interview as DeChambeau walked behind him and said something at the PGA Championship in May.

One thing is for sure: On an American squad obsessed with team bonding as a path to defeat the Europeans, don’t expect Koepka and DeChambeau to play together or even play some pingpong in the team room.

Assuming, of course, that Koepka is in the team room at all.

Bonding with fellow players, it seems, just isn’t his thing.

“I haven’t been in the team room,” said Koepka, who is teamed with Daniel Berger against Lee Westwood and Matt Fitzpatrick in an opening foursomes match Friday. “Just chilling too much. I know the obligations are cut down, but I’ve still got long days.”

Those days have presumably been filled with practice and physical therapy for the variety of injuries Koepka always seems to be nursing. He hurt a wrist a few weeks ago and has long had issues with his knees.

Still, he got a rebuke from Paul Azinger, the NBC analyst who knows a bit about the Ryder Cup as a former winning captain.

“I’m not sure he loves the Ryder Cup that much," Azinger said. “If he doesn’t love it, he should relinquish his spot and get people there who do love it.”

Koepka insisted Thursday that he never disparaged the Ryder Cup and that the media took it the wrong way. It was typical Koepka: blunt, defiant and unafraid to say just what he thinks.

But he raised eyebrows in a Golf Digest interview when he suggested that team golf, especially alternate shot where you are dependent on a partner, isn’t really his thing. He was also the only one of 12 American players who didn’t join captain Steve Stricker in an excursion to Whistling Straits earlier this month to play the course and get to know each other better — which Koepka said was because he was rehabbing his wrist injury.

On a young U.S. team with six Ryder Cup rookies, Koepka is an elder statesman of sorts at the age of 31. He has played in two Ryder Cups and has mostly delivered, with a 4-3-1 record on one winning and one losing team.

That could have been highlighted in a video posted on social media this week by the official U.S. team account. Instead, the video showed Koepka on the driving range walking over to DeChambeau and appearing to say hello as dramatic music soared and everything seemed right in the world again.

It wasn’t just hokey but disingenuous as well. The two just don’t like each other, no matter the message the short video was attempting to send.

In the end, though, none of it really matters. Even in a team match like the Ryder Cup, golf is still the most individual of sports and both Koepka and DeChambeau have the inner fire that makes them want to win every time they set foot on a course.

If the U.S. wins, they’ll celebrate and be feted alongside their teammates. In the team picture Sunday night they’ll both have big smiles — though likely from opposite sides of the frame.

If the Americans lose, they’ll be blamed for poisoning the atmosphere and ruining Stricker’s big moment in his home state of Wisconsin.

Meanwhile, the feud will continue. And golf will move on.

Another War by the Shore? Everything you need to know about the Ryder Cup at Whistling Straits

Steve Stricker's biggest issue at Ryder Cup is getting back trophy

“We are worried about this one, and just trying to win this one,” Steve Stricker said when asked about Europe's dominance of the Ryder Cup.

“We have the best players this year,” said Paul Azinger, the lead analyst for NBC Sports who still uses pronouns as if it were 2008 when he was the U.S. captain. “And obviously, they (Europe) roll in with the most confidence and maybe the best team.”

Sport's biggest secret: Names in the envelopes at Ryder Cup

The captains are required to put one name in an envelope on Saturday evening. That player would sit out and be given a half-point if someone on the other team can't play because of injury.

As if there wasn’t enough suspense and second-guessing of the Ryder Cup captains in past years, a nod to the COVID-19 pandemic could make things more topsy-turvy than usual this time around.

“Amazing that this golf course is man-made,” European vice captain Graeme McDowell marveled, “because it just looks like it’s been there since the beginning of time.”

No Tiger, No Phil. And maybe a US Ryder Cup win

Tiger Woods won’t be at Whistling Straits this week, for obvious reasons. Phil Mickelson will, but for the first time since 1995, he won’t hit a shot in the Ryder Cup.

Friction within the team the Ryder Cup might be new for the Americans, but it hasn’t kept the Europeans from winning with regularity.

Lee Elder earned one of the nine automatic qualifying spots for Team Europe and will tie Nick Faldo's European record by making his 11th appearance this week.

At the Ryder Cup, Ian Poulter becomes an eye-bulging, fist-pumping burst of adrenaline who can put up ‘W’s while also getting under almost anyone's skin, whether it be Tiger Woods, Dustin Johnson or even Michael Jordan.

“I think this is a team event. I'm focused on helping Team USA to a victory, and that's honestly the reason why I'm here,” Bryson DeChambeau said.

Sergio Garcia is one of only four players to compete in Ryder Cups across four decades, and he has won 25 1/2 points, the most in Ryder Cup history and as many points as the 2021 U.S. team combined.

US chances at Ryder Cup may hinge on Justin Thomas, Jordan Spieth

Jordan Spieth and Justin Thomas almost surely will be paired together in both foursomes and fourballs beginning Friday, and what they deliver will go a long way toward deciding if Team USA can win the Ryder Cup.

A hole-by-hole look at the Straits course at Whistling Straits, site of the 43rd Ryder Cup matches Friday-Sunday.

Ryder Cup 2021: A capsule look at the European team

A capsule look at the European team for the 43rd Ryder Cup matches Friday-Sunday at Whistling Straits.

Ryder Cup 2021: A capsule look at the American team

A capsule look at the American team for the 43rd Ryder Cup matches Friday-Sunday at Whistling Straits.

“There's been captains who did a good job and it doesn't equate to a win,” Steve Stricker said before laughing and adding, “It can be a thankless job.”

US seeks answers to why Europe keeps winning Ryder Cup

The Americans bring the type of credentials that make them favorites in just about every Ryder Cup, and this year is no different. It just rarely translates into winning the Ryder Cup, and only Europe seems to have the answer.

The Americans have 11 of the top 16 players in the world and COVID-19 travel restrictions make the crowd at Whistling Straits even more one-sided than Lambeau Field.

In the post-Brexit world, seven of Europe’s 12 players aren’t technically from countries in the European Union anymore.

Team USA's Brooks Koepka gets a club on the 10th hole during a practice day at the Ryder Cup at the Whistling Straits Golf Course Wednesday, Sept. 22, 2021, in Sheboygan, Wis. (AP Photo/Ashley Landis)