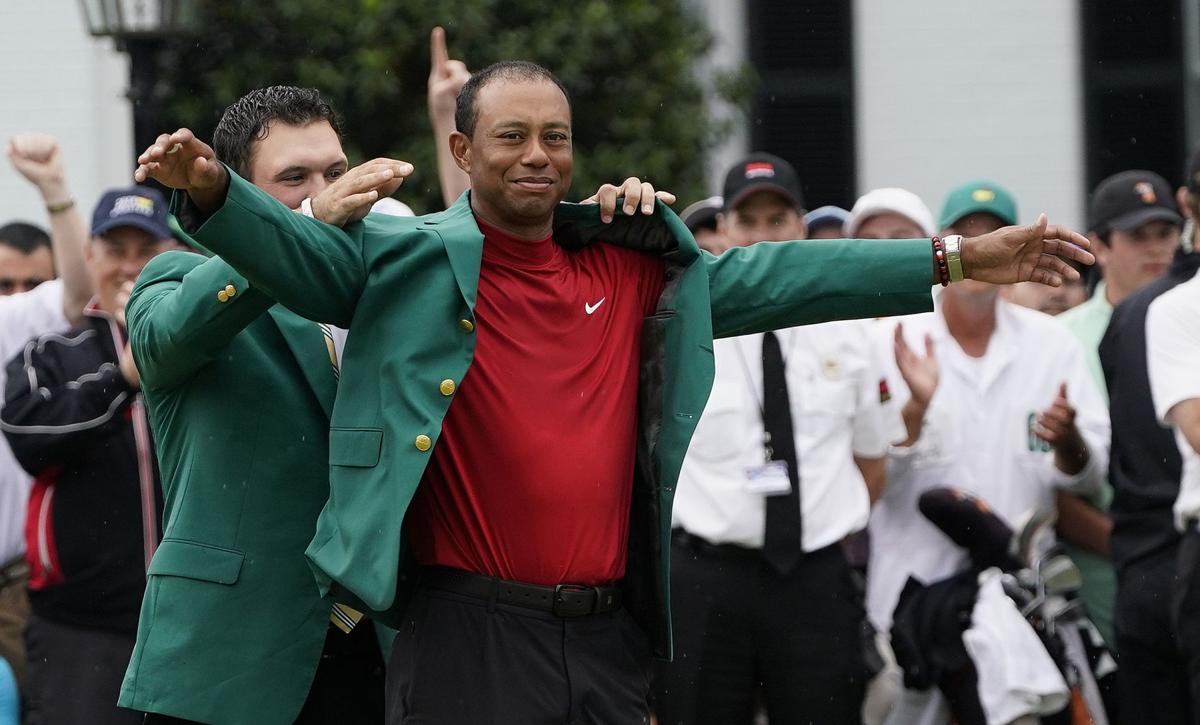 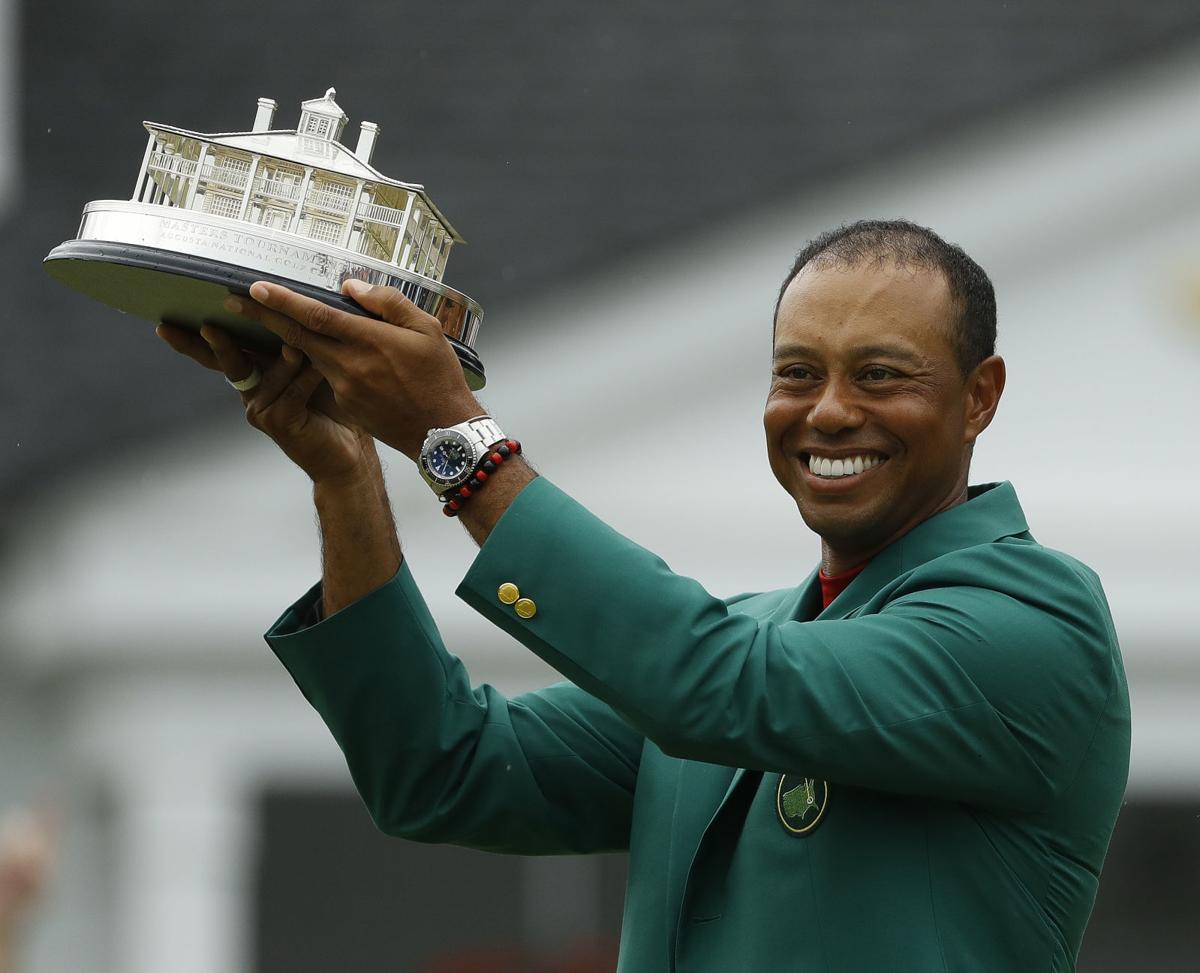 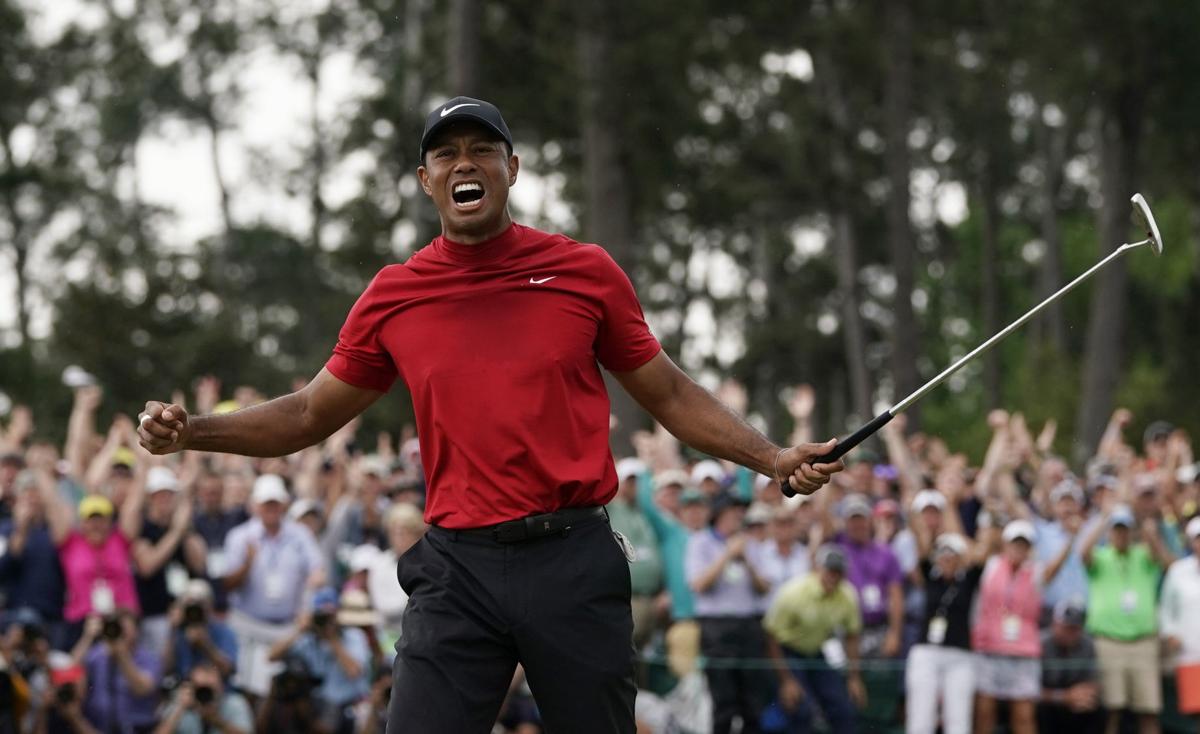 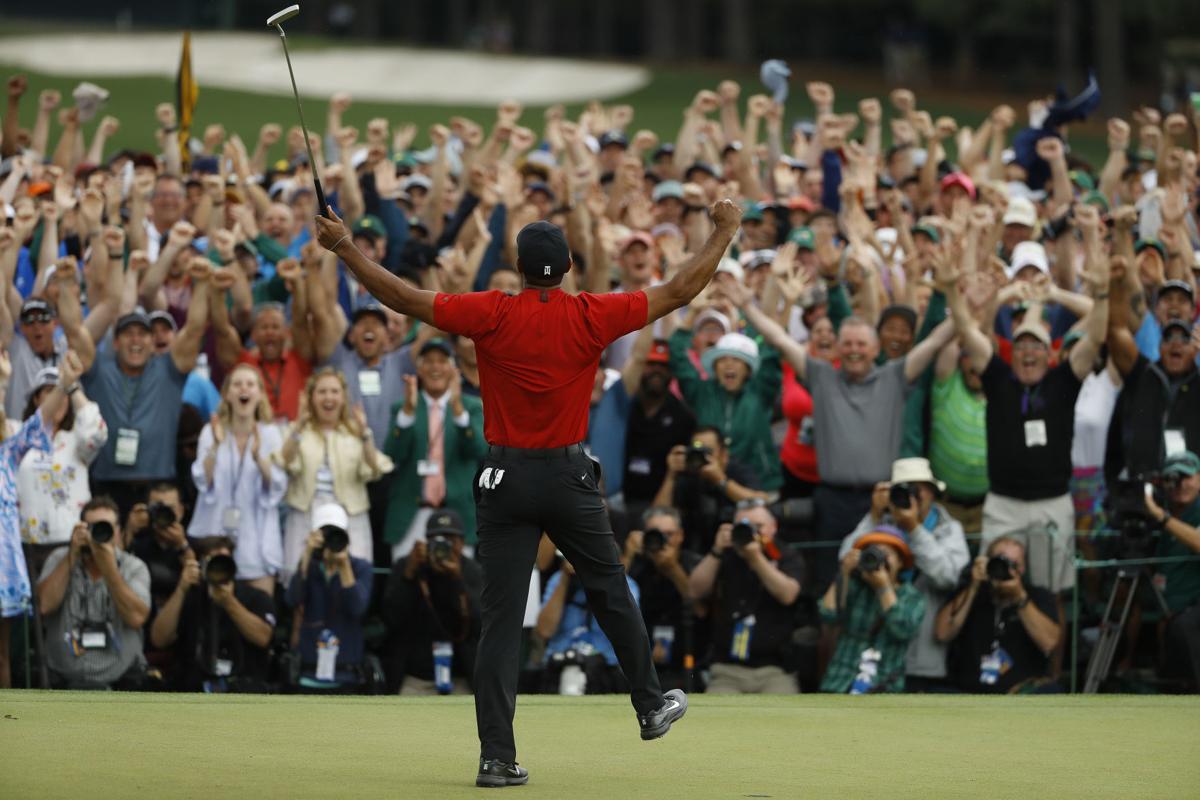 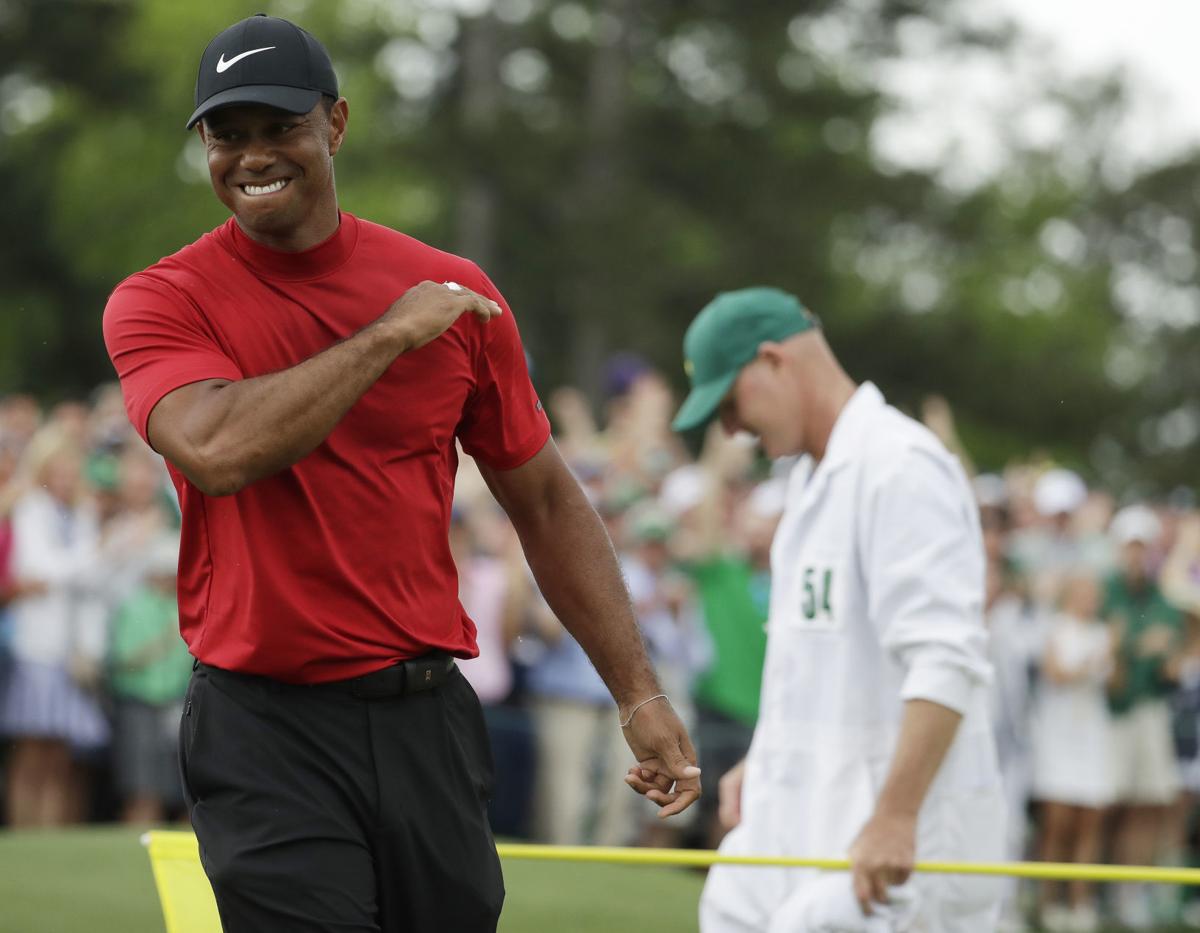 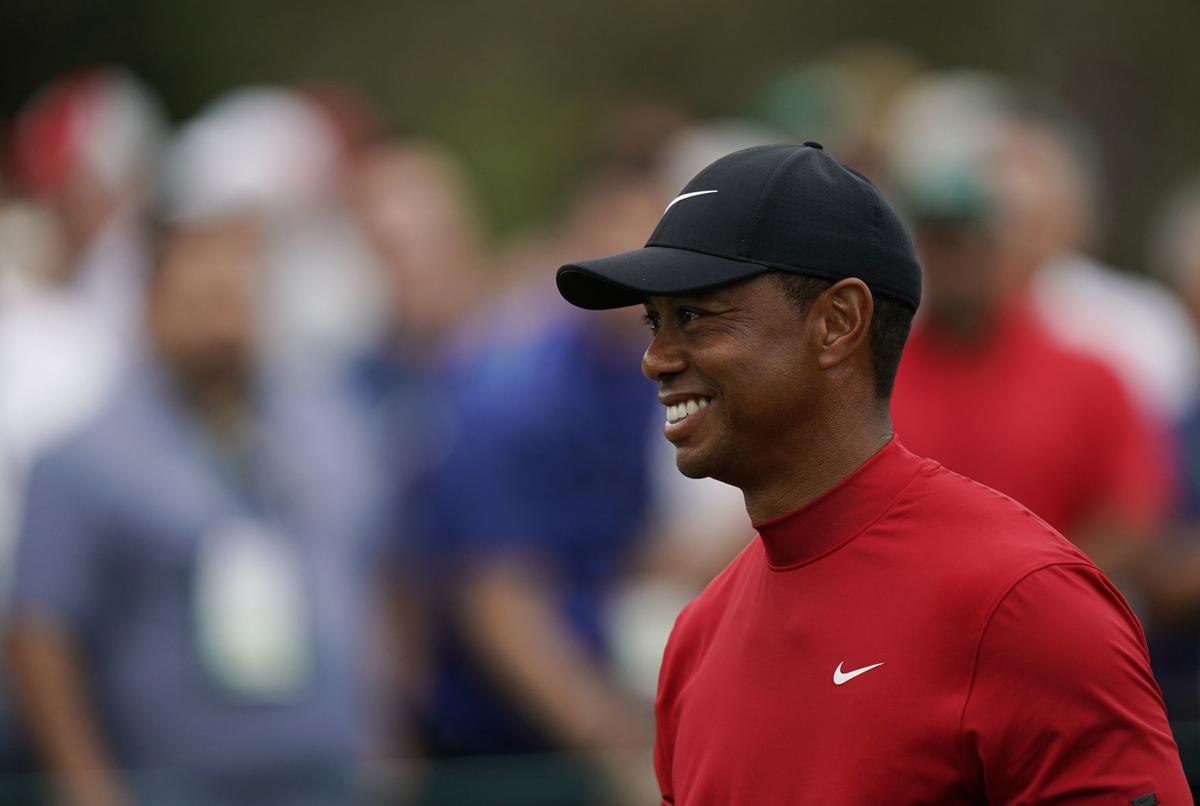 Tiger Woods smiles as he walks off the seventh tee during the final round for the Masters golf tournament, Sunday, April 14, 2019, in Augusta, Ga. (AP Photo/David J. Phillip) 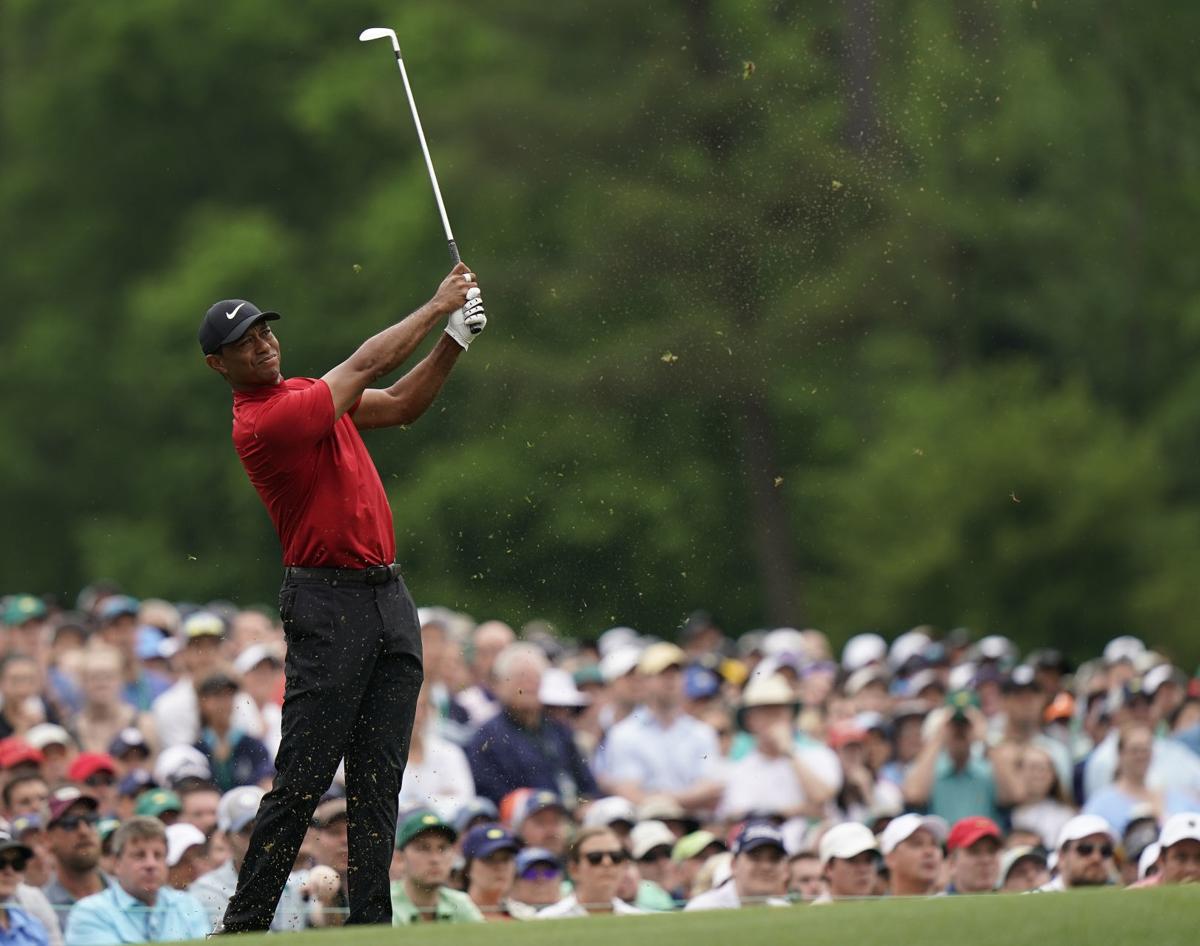 Tiger Woods hits on the 12th hole during the final round for the Masters golf tournament, Sunday, April 14, 2019, in Augusta, Ga. (AP Photo/David J. Phillip)

AUGUSTA, Ga. — Jim Nantz was told by the late Ken Venturi after Jack Nicklaus' 1986 Masters win that he would never see a day like that around Augusta National again.

Nantz's 34th Masters ended up being just as dramatic with Tiger Woods' first victory in a major in nearly 11 years and his first green jacket since 2005.

"I think as far as pure elation and emotion, the scene around the 18th was the greatest thing I've ever been an eyewitness to," Nantz said after Sunday's broadcast.

Nicklaus' win was Nantz's first year with CBS as he was calling the action on the 16th hole. He moved to the host role three years later and has had a front-row seat to nine of Woods' wins in a major.

CBS was a huge beneficiary of Woods' win. They were on the air for 10 hours on Sunday because the final round was moved up due to possible inclement weather. CBS started at 9 a.m. EDT and had six hours of live coverage followed by a four-hour recap show.

Director Lance Barrow said he found out about the early broadcast before going on the air Saturday. CBS President Sean McManus said that despite the time change, it still had the feel and drama of a final round at Augusta.

"During huge events like this, everyone steps up. I am very proud of what we did and it was a great broadcast," McManus said.

When it comes to signature victories, Nantz noted there were plenty of differences between Woods' victory Sunday, his first win in 1997 and Nicklaus' rally.

"When Jack won, there were still a lot of players on the course. He was ahead of the lead groups, so he didn't walk off the 18th knowing he had won it," he said. "So, you didn't have that celebration of the player and the game of golf in 1986 like you had here."

In 1997, Woods had a nine-shot lead going into the final round with the only drama being if he was going to break the tournament's 72-hold scoring record. Nantz said broadcast that day was more about storytelling and celebrating the social significance of Woods' first major.

Nantz, along with Barrow and director Steve Milton, did a great job of letting the images of Woods celebrating with his family tell the story. Nantz was silent for 2 minutes, 42 seconds between the time he said, "the return to glory" after Woods sank his putt on the 18th hole and his family accompanying him back to the clubhouse.

Barrow also had the clip of Tiger hugging his father Earl after the 1997 Masters ready to go once the moment presented itself.

"I think what we saw today was such a human side of Tiger that if there were people that maybe weren't the biggest Tiger fans in the world, I think today they saw a side of this," Nantz said. "We didn't see him as a loving dad because that's been shielded from public view. To see his interactions with his children today, that was as rich as the sports moment because we haven't seen that before. We saw it with his dad."

Barrow and Milton also captured a prescient moment when Francesco Molinari was walking up to the 12th tee with a two-shot lead but looked nervous. Molinari's tee shot would go into the water and opened the door for Woods.

"One of the great moments of any Masters is when the leaders walk from 11 to 12. I think you see a lot on the player's faces," Barrow said. "It is not a very long hole, but treacherous. A lot have stood there with the lead and it has ended up in disaster and that's where it started for him."

Nantz said that Molinari's collapse was a bit jarring because he held his own against Woods at last year's British Open and at the Ryder Cup. He added that once four of the last six players found the water on No. 12 "that I and everyone else knew that this was going to be Tiger's historic day."

What also made the day unique for Barrow and the crew was that they immediately got to relive the moment by doing the encore show.

A highlight of that show was Woods coming back to do a second interview at Butler Cabin with Nantz and Sir Nick Faldo. Barrow said CBS Executive Producer Harold Bryant mentioned that it would be great if they could get Woods again. Barrow called a representative from Augusta National. A couple minutes later, they called back and said Woods would be there in five minutes.

"We didn't have a time to stop and catch our breath. We had two minutes after the Butler Cabin presentation to do the encore," Barrow said. "You get to sit there and watch what you just did, which is unusual. When you're working, you are focused hard on what you need to do and comprehending everything like someone sitting at home.

Return to glory: Tiger Woods makes Masters his 15th and most improbable major

It was only two years ago at Augusta National that Woods needed a nerve block just to hobble upstairs to the Champions Dinner, unsure he would ever play another round of golf.

It will be a Sunday unlike any other at the Masters — an early start because of storms forecast for Sunday afternoon, with threesomes going off the first and 10th tees.

Major champions Francesco Molinari, Jason Day, Brooks Koepka, Adam Scott and Louis Oosthuizen created the first five-way tie for the lead going into the weekend at the Masters, with Tiger Woods among those just a shot behind.

Brooks Koepka and Bryson DeChambeau wound up in a share of the lead after the opening round of the Masters Thursday at 6-under 66.

Briefly, Tiger Woods was back atop the Masters leaderboard

The confidence seemed back, even if Tiger Woods didn't quite get his history right after a 2-under 70 left him four shots off the lead after the first round.

So many contenders, so many storylines for 2019 Masters

The course is in excellent shape, but more rain last week and on Tuesday has left it so soft that even the humming of sub-air systems won't be able to make this firm and fast, especially with scattered showers in the forecast.

"I would dearly love to win this tournament one day," McIlroy said. "If it doesn't happen this week, that's totally fine, I'll come back next year and have another crack at it. But I'm happy with where everything is — body, mind, game."

Can Tiger Woods still win the Masters at 43?

The old Tiger may not be fully back, but the prevailing thought is there's enough of his greatness left to fit comfortably inside a green jacket come late Sunday afternoon.

A La Crosse man who claims to have never placed a bet on sports before he risked $85,000 on Tiger Woods winning the Masters is now more than a million dollars richer.

The new Tiger Woods manages his health more than his game

Tiger Woods has played just three tournaments — 10 rounds — since he won the Masters in April.

“I felt energetic, I felt really alive and wired and kind of irritable, and I didn’t know what was going on,” Tiger Woods said in an interview with GolfTV made available Thursday.

Doug Ferguson: The color of Masters in April is missing a red shirt

Tiger Woods in his traditional Sunday color has become an indelible part of the Masters over the last 25 years, so his absence following his February crash leaves a big void.

Tiger Woods smiles as he walks off the seventh tee during the final round for the Masters golf tournament, Sunday, April 14, 2019, in Augusta, Ga. (AP Photo/David J. Phillip)

Tiger Woods hits on the 12th hole during the final round for the Masters golf tournament, Sunday, April 14, 2019, in Augusta, Ga. (AP Photo/David J. Phillip)